A PRELIMINARY SCREENING OF THE MEDICINAL PLANT DESMODIUM GYRANS (LINN.F) DC FOR ITS ANTIMICROBIAL, PHYTOCHEMICAL AND WOUND HEALING PROPERTIES

A PRELIMINARY SCREENING OF THE MEDICINAL PLANT DESMODIUM GYRANS (LINN.F) DC FOR ITS ANTIMICROBIAL, PHYTOCHEMICAL AND WOUND HEALING PROPERTIES

A. Kalirajan, J. Savarimuthu Michael, and A. J. A. Ranjit Singh*

INTRODUCTION:Herbal drugs are prescribed widely because of their effectiveness, less side effects and relatively low cost 1. Hence investigation on some active principles from traditional medicinal plants has become more important 2.

The world health organization 3 has also recommended the evaluation of the effectiveness of plants in condition where we lack safe modern drugs 4. Many efforts have been made to discover new antimicrobial compounds from various kinds of sources such as microorganisms, animals and plants. As there is no report on the antimicrobial, phytochemical and wound healing potential of this plant, investigation was made in this medicinal plant Desmodium gyrans. Desmodium gyrans is one of the medicinal plants which are commonly known as “Tholukanni”. It belongs to the family Fabaceae. It is a tropical Asian shrub. It is usually growing at more than 3000 meter elevation higher from the ground level. 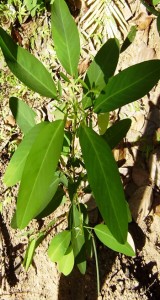 To date so many research have been carried out in the movement of this plant leaf based on temperature, electricity and magnetic power rather than the medicinal point of view. In order to find out the medicinal value of this plant we have attempted to traceout the antimicrobial, phytochemical and wound healing properties of the medicinal plant Desmodium gyrans.

Plant Collection: Desmodium gyrans was collected from Kani tribal settlement near Karayar during the month of March 2010, which is located in Tirunelveli district, Tamil Nadu. This plant was then identified by referring to the book “The flora of Presidency of Madras 6. Voucher specimens of this plant were deposited in the Dept. of Biology, Sri Paramakalyani College, Alwarkurichi. The leaves of this plant were brought to the laboratory and shade dried for five days.

Microbes and Media: The clinical bacterial isolates such as E.coli, Salmonella typhi, Klebsiella pneumoniae, Vibrio cholerae and Staphylococcus aureus were used. The bacterial isolates were obtained from Asan memorial college, Chennai and the slants were maintained in nutrient agar, which were stored at 40C until further use.

Antimicrobial activity: The extracts were screened for their antimicrobial activity invitro by plate hole diffusion assay as described by 8, 9. The clinical pathogens such as E. coli, Salmonella typhi, Klebsiella pneumoniae, Vibrio cholerae and Staphylococcus aureus were inoculated in nutrient broth and kept for incubation at 37oC for 24 h after incubation the suspension was checked for 0.7 McFarland value and was used as the seed culture.

For screening Muller-Hinton agar was prepared and seeded with 0.5 ml of respective bacterial pathogens. Then the holes were made by using a sterile cork-borer and is added with different volumes (25µl, 50µl, 75µl and 100µl) of the crude methanol and aqueous extract of Desmodium gyrans (1g/10 ml D.W) and kept for incubation at 37oC for 24h.

After incubation for 24h the results were recorded for the zone of inhibition and Streptomycin (10µg/5ml) was used as positive control for this study.

Preliminary Phytochemical Screening: The methanol and aqueous extract of Desmodium gyrans was subjected to various bio chemical tests to detect the presence of different phytoconstituents 10.

The extract was made into a paste in distilled water. In the incised area of three rabbits, 0.5gram of the extract paste was applied gently using a cotton swab. Another three rabbits were treated with the commercial antibiotic neomycin (0.5 g). The treatment was subsequently followed for about 7 days.

Measurement of Wound healing: The wound healing activity was measured by outlining the wound as accurately as possible on a super imposed sheet of sterile cellophane. This outline was then transferred directly to a sheet of tracing paper and the area within it determined with a radial plantimeter. Subsiquent measurements of the wound were made at regularly spaced intervals as healing progressed 11.

Results and Discussion: Preliminary phytochemical screening of the extracts of D.gyrans showed the presence of Alkaloids, Steroids and Saponins, Xanthoproteins and Tannins (Table 1 and Figure 2). The methanol extract of D. gyrans was found to be more effective against V. cholerae and E. coli (Table 2 and Figure 1).

The aqueous extracts of the plant were found to be effective against multidrug resistant Staphylococcus aureus. Both methanol and aqueous extracts of the plant D. gyrans showed the presence of Alkaloids and steroids, and there phytochemicals were the reason for its antimicrobial activity in the extract. The standard antibiotic Streptomycin showed zone of inhibition of about 22mm.

The wound healing assay showed the aqueous extract of Desmodium gyrans have the potential to heal wounds. The wound incised in the rabbit got cured in 8 days. In case of rabbits treated with commercial antibiotic neomycin, complete curing took ten days (Table 3 and Figure 3).

The usage of the plant Desmodium gyrans by Kani Tribes of Western Ghats to treat wounds had been well proved by the experimental studies with the extract. Hence there is a great scope for developing a wound healing drug from Desmodium gyrans. 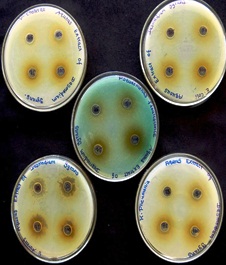 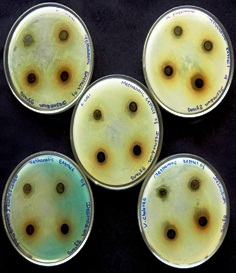 TABLE 2: SHOWING THE ANTIMICROBIAL ACTIVITY OF DIFFERENT EXTRACTS OF THE PLANT DESMODIUM GYRANS 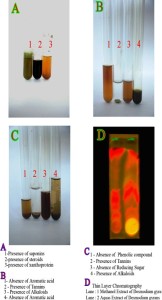 FIG. 2: SHOWING THE PRESENCE OF PHYTOCHEMICALS OF DESMODIUM GYRANS

TABLE 3:  SHOWING THE WOUND HEALING POTENTIAL OF THE EXTRACTS OF THE PLANT DESMODIUM GYRANS 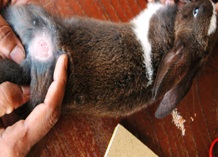 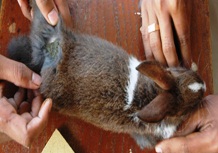 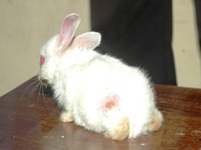 The evaluated wound healing assay clearly indicated the wound healing potential of the extracts of the plant Desmodium gyrans much more than the standard antibiotic neomycin. Further research is needed to isolate and characterize the bioactive principle to develop new natural drugs from this plant.

ACKNOWLEDGEMENT: The authors are thankful to the principal, Sri Paramakalyani College, Alwarkurichi for providing facilities to conduct experimental studies in the advanced Zoology and Biotechnology Laboratories.

A. Kalirajan, J. Savarimuthu Michael, and A. J. A. Ranjit Singh*