ABSTRACT: Metformin, an AMPK activator, acts as an oral hypoglycaemic agent. It reduces the risk of cancer during the treatment of diabetes and diabetes associated cancers. The effect of metformin on different type of cancers is explained on the pathway of AMPK activation involving hepatic fatty acid oxidation, inhibition of triglyceride and cholesterol synthesis and also modulation of insulin secretion. There is evidence of reduced risk on cancer incidence and mortality in diabetic patients 13. The inverse association was significant for pancreatic and hepatocellular cancer and non-significant for colon, breast and prostate cancer. Metformin associated with a decreased risk of cancer incidence compared with other treatment among diabetic patients. The main process for reducing cancer risk in diabetic patients is the lowering of the uptake and utilisation of nutrients into the biomass needed to produce a new cell from an active proliferating cell. Many observational studies in favour of Metformin as an antineoplatic agent reported but the confirmed report may be forwarded in the near future.

INTRODUCTION: AMPK (5 AMP-activated protein kinase or Adenosine monophosphate activated protein kinase) is a functional enzyme having three protein subunit which is conserved from yeast to human. It plays an important role in cellular energy homeostasis. It expresses in a number of tissues including liver, brain, skeletal muscle. AMPK activation has a role in the stimulation of hepatic fatty acid oxidation, ketogenesis, inhibition of triglyceride and cholesterol synthesis, lipogenesis, adenocyte lipolysis, stimulation of skeletal muscle, fatty acid oxidation and muscular glucose uptake and modulation of insulin secretion by the pancreatic beta cell 1.

Again AMPK acts as a metabolic master and switch regulator of several intracellular system including the cellular uptake of glucose, beta oxidation of fatty acid, biogenesis of glucose transporter-4(GLUT-4). During the physical exercise, AMPK activity increases   in the muscle cell, and experiences metabolic stress. The biguanides - metformin acts by stimulating AMPK which leads to reduced glucose production in liver and reduced insulin resistance in muscle. It causes weight loss, reduced appetite 2, 3. The clinical significance of the AMPK activation are many but a few are worth mentioning- Physical exercise and improved insulin sensitivity 2. 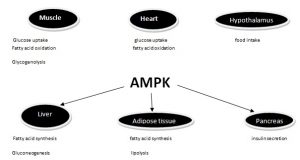 Metformin asantidiabetes and anticancer:  Interest in the potential relevance of biguanides to neoplastic diseases was stimulated by a report describing reduced cancer burden in diabetic  patients treated with metformin as compared  with other diabetic therapies. Biguanides were shown to have cell autonomous antineoplastic activity in many in vitro models. During the last 5 years interest in this field has grown exponentially and has been reviewed extremely 4, 5. Emphasis will be on the pivotal studies on the most recent studies and current controversies. Investigation of potential indications of metformin in oncology is appealing because the drug is inexpensive, relatively safe, seems to involve at least in part, modulation of energy metabolism which is a cancer research theme that is attracting increasingly interest. There is interest in possible “Anti aging or Calorie restriction mimetic” of metabolism, which may involve mechanism so relevant to antineoplastic effect 6, 7.

Effect of metformin on cancers: The study of the link between AMPK, LKB1 and cancer show a significantly lower incidence of cancer compared with other medications. There is an overall risk reduction of cancer (30%) particularly of liver and colon. Studies in animal models support the idea that biguanides and other AMPK activators can be used to protect against tumor development and even to treat the tumor once they have arisen. 8, 9. The delay in tumorigenesis is caused by AMPK activation rather than AMPK independent “off target effects” The same is shown with phenformin with the mechanism of AMPK independent effects& also with tumor markers of necrosis apoptosis 10.

The action of metformin and phenformin is confirmed by immunohistochemistry that AMPK activation in lung tumors. AMPK activation is greater with phenformin than metformin possibily due to greater membrane permeability) that is why phenformin is used in the analysis of survival. Phenformin is cytotoxic and causes necrosis, apoptosis of tumor cells (absence of functional LKB1-AMPK pathway) more sensitive to ATP depleting effects of the drugs 8. The same is reconfirmed with further animal studies 10. AMPK appears to be a tumor suppressor that protects against initial tumor development. Therefore, it is easy to treat cancer if the AMPK pathway is lost.

Effect of metformin on whole organism level: Metformin action in metabolic tissues that control blood glucose without considering on other organs relevant to oncology- prostate, breast, lung or tumors arising from them 11-12. Hyperinsulinaemia as an adverse prognostic factor or risk factor for several common cancers –breast,13, 14 colon,15, 16 prostate 17, 18 that metformin slow down the growth of the tumor that are insulin responsive by lowering insulin level. Changes to hormone, cytokines which influences tumor growth is influenced by metformin, as comparison metformin represent more effective pharmacologic strategy than somatostatin analogue in breast cancer adjunct therapy- correlated with any antioneoplastic activity.

Epidemiological studies: Metformin has been associated with decreased cancer risk in diabetic patients. There is evidence of reduced risk on cancer incidence and mortality in diabetic patients 13. The inverse association was significant for pancreatic and hepatocellular cancer and nonsignificant for colon, breast and prostate cancer. Metformin associated with a decreased risk of cancer incidence compared withother treatment among diabetic patients. On analysis, metformin is associated with 31% statically significant decrease in cancer risk compared with other diabetic treatment and also specific major cancer killers such as   colon 20, pancreatic 21, Hepatocellular 22, 23, breast 24, prostate 25 that diabetes or elevated insulin and glucose levels play an important role in the development of these tumors and also large risk reduction (60-80%) on colon and pancreatic cancer. Metformin has reversed the effects of the high energy diet on the growth of the colon cancer cell. The report of the National Cancer Institute (Canada and USA) about the efficacy of metformin in reducing breast cancer recurrence is promising.

A large number of observational studies reporting significant reductions in the incidence of or mortality from cancer associated with metformin use are afflicted with time related biases such as immortal time bias, time window bias and time lag bias. The effect of metformin on carcinogenesis is related to established tumors. The report which is confirmed by the National Cancer institute of Canada serves as a weak evidence 26.

Metformin decreases growth of cancer cells in vitro and in vivo with increasing the activity of AMPK pathway; a central cellular key energy sensor allowing cell division which highly energy consuming process. Once the AMPK is activated there is suppression of many metabolic process which is highly dependent on sufficient ATP supply(gluconeogenesis, protein and fatty acid synthesis, cholesterol biosynthesis) and promote catabolic process (glycolysis fatty acid oxidation) 26. The main process for reducing cancer risk in diabetic patients is the lowering of the uptake and utilisation of nutrients into the biomass needed to produce a new cell from an active proliferating cell 16.

Current investigations: The following key areas are identified for investigations and confirmation the effect of metforminas an antineoplastic agent.

CONCLUSION: The present review of the properties of metformin as an antineoplastic may attract many investigators for a new anticancer agent because the present article quotes many methods and findings of renown investigators and scientists. The review also highlighted the comments of the reputed scientific forums. Therefore, there will be a further search in depth by the oncologist.

ACKNOWLEDGEMENT: We are grateful to Prof RK Bharati Devi for editing the review article.