Withania somnifera Dunal. (ashwagandha) is widely used in Ayurvedic medicine, the traditional medicinal  system of India. It is an ingredient in many formulations prescribed for a variety of musculoskeletal conditions (e.g., arthritis, rheumatism), and as a general tonic to increase energy, improve overall health and longevity, and prevent disease in athletes, the elderly, and during pregnancy. In the recent past tremendous attempts are being made to evaluate the scientific standards for Traditional system of medicine. For the standardization of this drug Pharmacological and Phytochemical parameters were carried out such as moisture content, ash values, pH values, extractability in water and alcohol were carried out. Thin Layer Chromatography studies were also carried out to ascertain the quality of this drug.

INTRODUCTION: Withania somnifera (WS) is popularly known as Ashwagandha or Winter Cherry or Indian ginseng is considered one of the most important herbs in Ayurvedic indigenous medical systems for over 3000 years and is commonly used in Indian traditional health care systems. The plant is said to have a potential property of pacifying ‘Vata’ in herbal drugs compared therapeutic value of its roots with Panax ginseng 1-3 .The genus Withania is an important member of the family Solanaceae. Twenty-three species of the genus Withania have been reported. Of these, only two W. somnifera (Linn.) Dunal and W. coagulans (Linn.) Dunal have been reported from India.

The dried roots of the shrub, W. somnifera, commonly known as ‘Ashwagandha’, are important ingredients in Ayurvedic medicine. Roots of Withania contain several alkaloids of medicinal value. These include 13 Dragendorff-positive compounds, withasomine and visamine 4. It is a green shrub (family Solanaceae) 5 found throughout the drier parts of India, Baluchistan, Pakistan, Afghanistan, Sri Lanka, Congo, South Africa, Egypt, Morocco and Jordan. In India, it is widely grown in the provinces of Madhya Pradesh, Uttar Pradesh, plains of Punjab and northwestern parts of India like Gujarat and Rajasthan 6, 7. Wild W. somnifera genotypes may possess genes important for the development of new varieties of this important species 8. The plant is popularly known in India by different vernacular names like Punir (Hindi), Ashvaganda (Bengal, Bombay), Aksan (Punjab), Amukkira (Tamil), Tilli (Marathi) etc. 9

This grows in the temperate climates. The stems are around 3 to 4 feet in height. One plant survives for up to 4 to 5 years. The leaves are bowl shaped, small and without thorns. It remains green for 12 months near big trees and ponds. Its stem contains fiber like texture. The leaves are oval shaped, 2 to 4 inches long and contain fiber. The flowers are blooming at the base of the stems are small, somewhat long with chimney shape and yellowish green in color. The flowers bloom from the base of the leaves and become red when wipe. The seeds are small, heart shaped, smooth and flat. The roots are rough, white from within, strong, transparent, thick and one to one and half feet long. The seeds are sown in rainy season and harvested in the spring season 10, 11. It is an ingredient in many formulations prescribed for a variety of musculoskeletal conditions (e.g., arthritis, rheumatism), and as a general tonic to increase energy, improve overall health and longevity, and prevent disease in athletes, the elderly, and during pregnancy 12-15. Also used in anxiety and depression 16-18, Chronic Stress 18-20.

MATERIALS AND METHODS: Plant material was collected in Sep. 2009 from C.R.I. Gwalior M.P. (WSg) and N.I.A.P.R. Patiala, Punjab (WSp) and specimen was identified and authenticated at the National Institute of Ayurvedic Pharmaceutical Research (NIAPR), Patiala (Punjab). Roots were washed in running water and air-dried. The root was powdered. The fresh powdered root was then studied for physicochemical evaluation. Physicochemical studies like total ash, water soluble ash, loss on drying at 105 °C and extractive values were carried out as per the WHO guide lines. Preliminary phytochemical tests were done as per the standard methods.

RESULT AND DISCUSSION: Physicochemical parameters of the root powder of all the samples of Withania somnifera Dunal are tabulated in Table 1. Deterioration time of the plants material depends upon the amount of water present in plant materials. If the water content is high, the plant can be easily deteriorated due to fungus. The loss on drying at 105°C in roots were found to be 7.35% and 8.36% .Total ash value of plants material indicated the amount of minerals and earthy materials attached to the plants material. Analytical results showed total ash values and water soluble ash content was 4.61%, 3.87% and 0.635%, 1.24% respectively. The amount of acid insoluble ash  present in the plant samples were 0.83%, 1.26%.The water soluble extractive values indicated the presence of sugar, acids and inorganic compounds. The alcohol soluble extractive values indicated the presence of polar constituents like phenols, alkaloids, steroids, glycosides and flavonoids.

Thin Layer Chromatography: 4 gm of sample was soaked in 40ml of ethanol (90%) with occasional shaking for 18 hrs, boiled for 10 minutes and filtered. The filtrate was evaporated and concentrated and made up to 10ml in standard flask. It was applied on (E. Merck) Aluminium plate pre-coated with Silica gel 60 F254 of 0.2 mm thickness. During this process many solvent system were developed at different ratio such as Chloroform: Methanol at ratio 8:2, 6:4; Pet. Ether: Ethyl acetate at ratio7:3; Toluene: Ethyl acetate at ratio 6.5:3.5 but spots were not visible clearly. When the plate was developed in Toluene: Ethyl acetate: Acetic acid (6: 4: 0.5 v/v). After air drying the plate was visualized in UV 254 and 366 nm but spots were not clearly  visualized .The plate was then dipped in Vanillin -Sulphuric acid and heated in air oven at 105°C till the spots appeared and their Rf  values are given in table 3 and the plate are shown in Fig. 1. 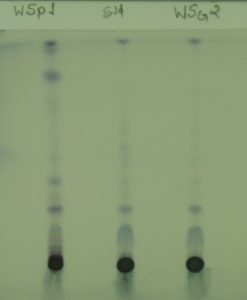 FIG. 1: SPOTS APPEARED ON ALUMINIUM PLATE FOR EACH SAMPLE AFTER DERIVATIZATION IN VISIBLE LIGHT

CONCLUSION: The present study revealed different physicochemical parameters which can be used for authentication of the crude drug samples. Physicochemical as well as various aspects of the samples were studied. It has been concluded from this study, there are difference between parameters of both the samples shows the effect of environmental condition. This study also helps to identify the right place for cultivation of medicinal plants and quality assessment.

ACKNOWLEDGEMENT: Authors are thankful to the Director of Shobhit University, Meerut for providing facilities.