ABSTRACT: Sri Lankan Ayurveda clinical practice Satapushpa Shatavari powder (SSP) with or without Satapushpa Shatavari Grita (SSG) enema is used for manage menstrual disturbances due to polycystic ovary syndrome (PCOS). Objective of Present study was to evaluate the efficacy of Satapushpa Shatavari Churna with Satapushpa Shatavari Grita Matra Vasti for the management of PCOS by an open label comparative clinical trial. Successful screening 60 PCOS participants were randomly divided into three groups (n = 20) viz Group A (Oral Administration of SSP 05g t. d. s. with 10 ml of cows ghee for 2 weeks), Group B (Rectal Administration of SSG as enema, 60 ml / day for 2 weeks with 1 week gap) and Group C (oral and rectal administration of SSP and SSG drugs respectively). After one month administration period participants in group A, B and C were assessed on PCOS appearance of the ovary, volume of the ovary, endometrial thickness by US scan. Further volume of menstrual flow, intermenstrual period and hirsutisum was assessed by standard scoring system. The study revealed that all treated groups were reduced their ovarian volumes when compare with pretreated stages. Endometrial thickness of each groups were improved and group C was shown significant improvement. Hirsutisum ratings score was significantly improved in group C. Quantities of the menstruation of all drug treated groups were significantly improved. The findings of the present study indicate that SSP therapy leads to comparable reduction of ovarian volume in a manner, which correlates with the degree of reduction of PCOS and related signs.

INTRODUCTION: Polycystic ovary syndrome (PCOS) is a complex endocrine disorder with an estimated prevalence of 4 - 21% in reproductive aged women depending on the diagnostic criteria and population examined 1, 2. PCOS clinical manifestations include oligomenorrhea or amenorrhea, clinical or biochemical signs of hyperandrogenism and present of polycystic ovaries on ultrasound examination 3, 4.

Annually around 30% of women were suffering from PCOS who were seeking treatment at Ayurveda gynecology clinic, Ayurveda teaching hospital, Borella in Sri Lanka. Modern medical system offers hormonal therapy and surgical procedures to the above disorder which may have more side effects.

In Ayurveda clinical practice Satapushpa Shatavari powder (SSP) with or without Satapushpa - Shatavari Grita (SSG) Matra Vasti (therapeutic enema) is commonly used treatment for manage menstrual disturbances due to polycystic ovary syndrome (PCOS) 5. But its efficacy was not clinically evaluated by a standard clinical research. Therefore present study was carried out as a randomized open labeled comparative clinical trial to evaluate the efficacy of oral administered SSP with SSG administered as therapeutic enema for the management of polycystic ovary syndrome (PCOS). Satapushpa (Anethum graveolens) and Shatavari (Asparagus racemosus) are indicated for conditions of oligomenorrhoea, hypomenorrhoea, an ovulation in Ayurveda and traditional medicine in Sri Lanka. It has being further noted that this drug can be used in oral and / or enema and/or nasal instillation 5, 6. Therefore the main objective of this research was to evaluate the clinical efficacy of oral root administration and per rectal administration of Satapushpa - Shatavari formula on PCOS patients.

Preparation of Satapushpa - Satavari Powder (For Oral Administration): Equal parts of Sata-puspa seeds and Satavari roots were pulverized and made fine powder (passes through a no. 80 sieve).

Ethical Approval: Ethical approval for the study was obtained from the Ethics Review Committee of the Institute of Indigenous Medicine, University of Colombo, Sri Lanka (ERC no: 14/33) (http://iim. cmb.ac.lk/erciim/) Written consent was obtained after explaining the study procedure to each volu-nteer prior to commencement of the study (n = 70).

Aged 18 years to 42 years of total 60 patients Table 1 were included in this clinical study on the criteria laid in the diagnosis of PCOS. History of the condition, previous history and present general condition, signs and symptoms, necessary investigations were recorded and during the subsequent visits progress of the signs and symptoms were recorded ones in two week. Cases were selected according to inclusion and exclusion criteria.

Following Criteria of Assessments were used Pre and Post Treatment:

Study participants (n = 60) were grouped randomly in to test groups A (SSP oral), B (SSP oral and SSG enema) and C (SSG enema) (every other patient from a list was included in to one group by the researchers). Each patient was in the test group for 01 month and follow-up for 03 months Table 2. One patient from the test group A, two patients from group C and three patients of group C discontinued participation on their own reasons. Thus the analyses included 54 patients (Flow diagram of study design, Fig. 1). At the end of one month study period the groups were assessed for PCOS appearance of the ovary, volume of the ovary, endometrial thickness by US scan. All the patients were advised to report every 14 days for follow up for two months period. 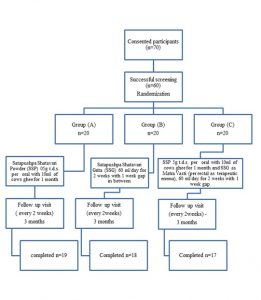 RESULTS: Demographic data of the research participants were presented in Table 2. Total 60 patients (n = 60) recruited for the study and 54 patients were completed (n = 19 in group A, n = 18 in group B and n = 17 in group C). Six patients where discontinued the study. No serious drug-related adverse events were observed. 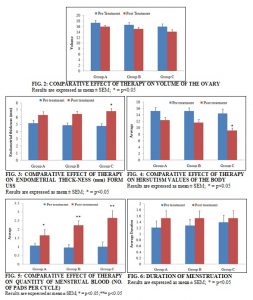 Group B: Satapushpa - Shatavari Grita (SSG), 60 ml /day as enema, for 2 weeks with one week gap in between;

DISCUSSION: There is currently no single medical PCOS therapy that fully reverses underlying pathogenesis. There is much variation in the treatments prescribed following a PCOS diagnosis, the widespread prescribing of oral contraceptives and metformin generally reflects the prognostic concerns raised in PCOS consensuses. Medical management places strong emphasis on a multidisciplinary approach as pharmaceutical treatments appear to be only moderately effective in treating individual symptoms 9, 10. Conventional pharmaceutical management is limited by the prevalence of contraindications in women with PCOS 11, non-effectiveness in some circumstances 10, side effects 12 and by preferences of women with PCOS for alternatives to pharmaceutical management 13. Herbal medicines are complex interventions with the potential for synergistic and antagonistic interactions between compounds 14.

Effects within the body may also exhibit complexity by simultaneous interactions with various body systems, both biochemically and by altering organ function 4. This three arm clinical trial was designed to investigate the efficacy of commonly used herbal formula for PCOS with different route of interventions in gynecological clinical setting in Sri Lankan Traditional Medicine and Ayurveda.

Pelvic ultrasound scans have assumed an increasing importance in the diagnosis and management of ovulatory disorders. Assessment of ovarian morphology by the use of ultrasound has become a substitute for histologic examination in diagnosing PCOS 15. Although, increased stromal volume is a feature of PCO, it has been shown that the measurement of the ovarian volume is a good surrogate for the quantification of stromal volume in clinical practice 16. Our results were found on reducing the volume of the ovary measured by ultrasound scan (US) in all three groups Fig. 2. The study revealed that endometrial thickness of each groups were improved and group C was shown significant improvement (p < 0.05) of endometrial thickness when comparing other two groups Fig. 3.

Hirsutism is a symptom of medical disorders associated with the hormones called androgens. Polycystic ovary syndrome (PCOS) is in which the ovaries produce excessive amounts of androgens. Therefore hirsutisum rating is a marker for excessive amounts of androgens level in PCOS. We used the most common visual method of scoring the extent of body and facial terminal hair growth based on a modification of the method originally described by Ferriman and Gallwey in 1961 17. These study results of hirsutisum scores were significantly low drug treated group C Fig. 4.

Furthermore, our finding that the prevalence of obesity and high androgen levels (hirsutism rating) within the patients with larger ovarian volume is seems to confirm the possibility of an interaction between ovarian morphology and anthropometric characteristics 17. Quantity of the menstruation Fig. 5 of drug treated groups A (p < 0.05), B and C (p < 0.01) were significantly improved. Duration of the menstruation Fig. 6 of all drug treated groups was improved. When we compared among three groups most effective group was the group C.

These research findings confirmed that clinical usage of Satapuspa seeds (Anethum graveolens) and Satavari roots (Asparagus racemosus) much effective in PCOS and combination with therapeutic enema was significant than single route usage.

CONCLUSION: The findings of the present study indicate that SSP therapy leads to comparable reduction of ovarian volume in a manner, which correlates with the degree of reduction of PCOS and related signs. In future larger scale studies will be planned to confirm our findings.

ACKNOWLEDGEMENT: We would like to thanks Director of Ayurveda Teaching Hospital Borella and Bandaranayke Memorial Ayurveda Research Institute of Nawinna Sri Lanka for their kind cooperation.