ABSTRACT: Combination drug formulations are better in terms of effectiveness and hence are used many times for treatment of diseases. The physico-chemical properties of the different API used in a formulation have a significant impact in the development of a single method for the analysis of such drugs. In the current research a rapid analytical method employing GC with Mass Spectroscopy detection has been developed and validated for simultaneous quantification of the active ingredients Ornidazole and Miconazole from the cream formulation. The analytes were extracted from cream base and filtered. A 95% dimethyl polysiloxane column with 5% phenyl polysiloxaneis used for the separation of the analytes. The method involves simple temperature gradient and MS detection. Validation of the method showed response was a linear function of concentration in the range 50-150 µg/mL for both Ornidazole and Miconazole. The method was suitably validated and was found to be precise and robust, with recoveries for both the analytes being consistent and complete. The method has been successfully applied for the analysis of samples from marketed cream formulations.

INTRODUCTION: Drug resistance development is on the rise due to the rampant and uncontrolled use of antibiotics and other drugs used in the treatment of infections. Combination drug treatments and therapies are being developed for many drugs that were originally used as standalone therapies for a faster and better control of the infections. For the analytical chemist this presents with a new set of challenges. Many times the components of this combination therapy have significantly differing physical (solubility, melting point etc.) and chemical (pKa, UV absorption maxima, stability in solvent etc.) properties.

In addition to this, there are the excipients and preservatives which also need to be separated from the analytes of interest for the quantification of the active drugs in the formulation. If separate methods are employed for the determination of the active ingredients then efficiency of the QC lab is affected as more time and efforts are needed from the chemist and less output is delivered in terms of number of samples analysed. Efforts are now being put in developing a common analytical method for multicomponent formulation analysis.

Ornidazole (Fig. 1) is an antifungal agent of the 5-nitro imidazole class of compounds. Ornidazole has a molecular formula C7H10ClN3O3 and its molecular weight is 219.625. It is soluble in chloroform and methanol. It is available commercially in the form of tablets, creams etc. Various analytical methods have been developed for the pharmaceutical analysis of Ornidazole alone or in combination with other drugs using HPLC 1-3, HPTLC 4-6, GC 7, Derivative spectroscopy 8-11 method of analysis etc.

Miconazole (Fig. 2) is an imidazole antifungal agent. Miconazole has a molecular formula C18H14Cl4N2O and its molecular weight is 416.127. It is soluble in ethanol, methanol, acetone and chloroform. It is marketed as injection, tablet, cream etc. Various analytical methods have been developed for the pharmaceutical analysis of Miconazole alone or in combination with other drugs using HPLC 12-15, HPTLC 15-17, GC18, Derivative spectroscopy 19 method of analysis etc. 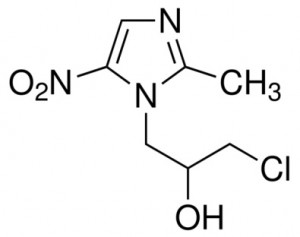 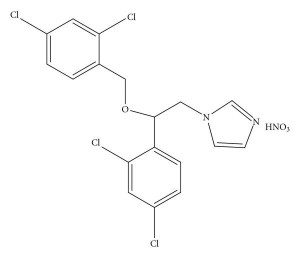 There are methods available in public domain for the estimation of Ornidazole and Miconazole using HPLC 20 and HPTLC 21. However, HPTLC technique is affected by various atmospheric factors such as humidity and temperature. Furthermore, the solvents used in the HPTLC analysis are Class 2 solvents such as Chloroform and Toluene; which presents additional challenges in the disposition of the analysis waste. For the HPLC method, the column performance and mobile phase can affect the results. In case of stationary phase degradation over time, the retention times can shift creating overlapping of peaks. Additionally the time required for the saturation and equilibration of an HPLC column is significantly higher and also consumes the costly solvents. The GC analysis method on the other hand uses only small quantity of Class 3 solvents and the components required for chromatography such as air, nitrogen, oxygen and hydrogen can be generated easily from the atmosphere and pure water. Furthermore the mass spectroscopic detection provides unparalleled specificity for the compound under investigation.

There is hence a need for developing an analytical method better suited for quantification of Ornidazole and Miconazole for routine quality control analysis. The current research involves development and validation of a new GC-MS method to quantify the drugs from marketed cream formulations as per the ICH Q2 (R1) guidelines 22.

The cream samples of about 1 gm was weighed in a clean dried 100 ml volumetric flask. Care was taken so that the cream sample does not stick to the neck of the flask. 30 ml of methanol was added to the flasks and sonicated for 60 seconds to disperse the cream in the methanol. The flask was further heated at 70°C for about 5 minutes to aid in the cream dispersion. The flasks were allowed to cool to come to the room temperature and then diluted to volume with methanol. The samples were further filtered with syringe filters into GC vials for analysis and crimped with Teflon septa caps to avoid any solvent evaporation.

Chromatographic separation was carried out using a Shimadzu QP2010 Ultra GCMS with a95% dimethyl polysiloxane 5% phenyl polysiloxane ((Restek CorpRtx5MS; 60m x 0.25mm ID, 0.1 μm film thickness) column. For each of the solutions 1 µl was injected in the chromatography system; in split mode with spilt ratio of 1:5. Nitrogen gas was used as carrier gas at a flow rate of 1.0 ml/ min. The injector port was maintained at 280ºCThe column oven is maintained initially at 180 ºC for 2 min and ramped to 280 ºC at the rate of 25ºC and held at 280ºC for 5 mins. The total run time for each sample analysis was 11 min. For the Mass spectroscopy detector, the following settings were maintained in Table 1.

The analytical method for quantification of OZ and MZ from cream formulation has been validated for selectivity, linearity, precision, accuracy, solution stability, ruggedness and robustness following appropriate recommendations of the ICH Q2(R1)regulatory guidelines recommendations 22.

Specificity was performed by chromatographing the individual working level solutions of Ornidazole, Miconazole, methyl paraben and propyl paraben. OZ and MZ were solutions of 100 ppm each and 5 ppm solution of methyl paraben and 0.5 ppm solution of propyl paraben were injected in the chromatographic system. No interfering peak of endogenous compounds was observed at the retention time of the analytes. The theoretical plates, tailing factor observed for peaks of OZ and MZ are 25286 &1.17and 93824&1.22 respectively. The resolution between the peaks of OZ and MZ was 57.27. Representative chromatograms of Ornidazole, miconazole, methyl parabenand propyl paraben are presented in Fig. 3, 4, 5 and 6 respectively. The representative chromatogram for sample solution is presented in Fig. 7. 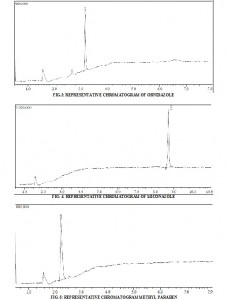 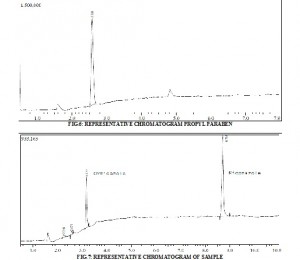 System suitability was evaluated by injecting six replicates of the mix standard preparation in the chromatographic system. The relative standard deviation (RSD) of the area response and the retention time were evaluated. The RSD values for area response was found to be 0.16 and 0.48 for OZ and MZ respectively. The RSD values for retention time was found to be 0.28 and 0.18 forOZ and MZrespectively.

Method precision was evaluated by injecting six preparations each of the two marketed formulations. The RSD for the back calculated % label claim of the active components was evaluated. The RSD values for the assay of OZ and MZ was found to be 0.98% and 0.64% respectively.

The response against concentration relationship was evaluated using a seven point calibration curve. Mixed linearity levels were prepared having concentration of 50, 60, 80 100, 120, 140 and 150 µg/ml for both OZ and MZ. The detector response of a 1 µl injection volume was measured and was plotted against the nominal concentration of each concentration level for both the analytes. The analytical method was found to be linear between 50 to 150µg/ml for both Ornidazole and Miconazole. The regression coefficient value were 0.9949and 0.9979 for the analytes OZ and MZ respectively. The linearity plot for OZ and MZ are shown in Fig. 8 and 9 respectively. 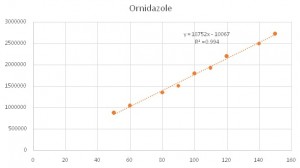 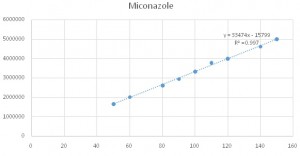 For ruggedness experiment the sample preparation and analysis was performed by another analyst using the same method of analysis. Six replicates of each of the marketed formulation were prepared and chromatographed on the next day of the method precision experiment. Intermediate assay method precision was evaluated by injecting six preparations each of the two marketed formulations.

Application of method to marketed formulations:

CONCLUSION: Ornidazole and Miconazole have distinct boiling points and polarity index thus developing a simultaneous method of analysis was a difficult task. The preservatives present in the formulations methyl paraben and propyl paraben are the other components to be resolved from the peaks of OZ and MZ and which can also be quantified using this method.

The GC-MS assay method has been developed and validated for quantification of OZ and MZ from cream formulations. The validation data demonstrate good precision and accuracy and high specificity for the analytes. The method was robust and did not encounter any variation with minor changes in the method parameters. This method was applied for the analysis of marketed formulations and were found to provide consistent and accurate results. This method significantly improves upon the drawbacks of the previously reported methods. It has also been observed that placebo interference is drastically reduced in the present method compared to the reported methods.

This assay method for simultaneous quantification of OZ and MZ will be beneficial for the routine and Quality control analysis of cream formulations containing these active ingredients, by saving the time and efforts of the analyst. This method can also be applied for the quantification of methyl and propyl parabens as well with suitable validation.

This work does not contain any research involving humans and/ or animals.

ACKNOWLEDGEMENT: The authors are grateful to Endoc Life care Pvt Ltd and Cipla Ltd for providing the reference standards for conducting the research work.