A RETROSPECTIVE STUDY OF MALARIA FROM WESTERN PART OF UTTAR PRADESH, INDIA

A RETROSPECTIVE STUDY OF MALARIA FROM WESTERN PART OF UTTAR PRADESH, INDIA

ABSTRACT: Background: Malaria is a serious parasitic health problem in India. Plasmodium vivax and falciparum pose the greatest public challenge in endemic areas. P. vivax accounts for more than half of all malaria cases. Accurate and prompt diagnosis is not only important to prevent morbidity, but also helps minimizing drug resistance. Aim: To know the profile of malaria parasite in the patients attending UPRIMS&R, a tertiary care center in Western Uttar Pradesh. Methods: A total 26,939 samples were subjected to smear microscopy (thin and thick) or rapid diagnostic tests. Result: 1330 positive malaria cases were detected. Malaria cases were maximum in year 2010. The proportion of P.vivax, P.falciprum and mixed malaria parasites was found 67% (891 out of 1330), 32% (420 out of 1330) and 1% (19 out of 1330) respectively. Conclusion: There is a decline in trend of malaria cases in India. The highest load of malaria cases was found in month September. P. vivax is still a predominant malaria parasite

INTRODUCTION: Malaria is still a major international health problem, responsible for 214 million infections worldwide and 438,000 deaths in 2015. It is one of the big – three infectious cause of death around the world, the two other being tuberculosis and HIV/AIDS. However, WHO world malaria report showed 18% decline in estimated cases and 48% decline in estimated deaths in 2015 1. Genus Plasmodium has five species, such as P. falciparum, P. vivax, P. ovale, P. malariae are human malaria species and P. knowlesi has been recorded recently causing malaria among monkeys in certain areas of South-East Asia. P. falciparum and P. vivax malaria pose the greatest public health challenge.

Accurate diagnosis of malaria is essential not only to prevent morbidity and mortality but also to restrict the use of anti-malarial drugs to minimize the spread of drug resistance. Smear microscopy and Rapid Diagnostic Tests (RDT) are recommended by WHO to diagnose the malaria cases. Smear microscopy remains the gold standard for malaria diagnosis. The test result depends on the expertise of technician, quality of equipment and level of parasitemia 7.  Various test kits are available to detect antigens from malaria parasites. Immunochromatography based Rapid diagnostic test (RDT) are among the newer approaches that has been developed to diagnose clinically suspected malarial cases. This test can be performed in remote areas, quickly, and requires no expertise 8.

The purpose of this study is to know the burden and profile of malaria parasites in our tertiary care hospital catering rural population of western part of Uttar Pradesh.

The study was conducted at a tertiary care rural hospital, UP RIMS and R, Saifai, Uttar Pradesh during January 2010 to December 2015. A total 26,939clinically suspected malaria cases were subjected to smear microscopy or rapid diagnostic tests.

Five ml blood (3ml in case of children) was collected through venipuncture by expert technician in full aseptic conditions. Peripheral thick and thin blood smears were prepared on same slide and stained with Leishmann stain as per standard laboratory protocol 9.

Leishmann stained blood films were examined under oil immersion fields. Stained slides were considered positive when at least one parasite was found, and negative if no parasite is found in 200 oil fields. Thin smear blood film was examined for species identification. Two expert microbiologists independently assessed each slide.

Commercially available “SatyaTM Malaria Antigen” was used for detection malarial antigens such as HRP-2 antigen and Pan specific aldolase anigen. As per the manufacturer’s instructions, the kit components were brought to room temperature before testing. Evenly mixed the anti-coagulated blood sample by gentle swirling. Immersed the sample-collecting loop (Kits component) into the sample, ensuring that a loop full of blood is retrieved and transferred the collected blood into the sample port of the device. Two drops of buffer was then immediately dispensed into buffer port, by holding the plastic bottle vertically. The result was recorded at end of 20 minutes.

Invalid result- if no colour bands appear on the device.

Negative for malaria-only one pink-purple band appears in the control area.

Positive for P. falciparum or mixed infection-in addition to the control band, two pink-purple bands at the areas marked `Pf` and `Pan` in the result window.

Positive for the other species (non-faciparum) - in addition to control band, one pink-purple band appears only at the area marked `Pan` in the result window.

This retrospective study was carried out from January 2010 to December 2015 to know the prevalence of malaria parasites in our tertiary care hospital. A total 26,939 clinically suspected cases of malaria were subjected to microscopic examination (19,934 cases) and Immunochromatographic rapid tests (6,995) to confirm the malaria cases at the Department of Microbiology, UPRIMS and R, Saifai Etawah (UP) India.

TABLE 1: AGE AND SEX DISTRIBUTION OF CASES OF MALARIA 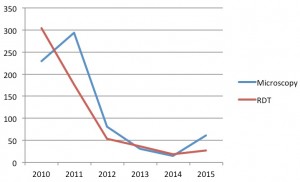 FIG. 1: DETECTION OF MALARIA CASES BY MICROSCOPY AND RDT. 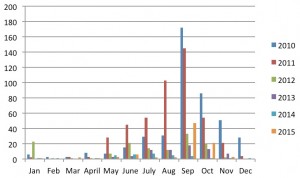 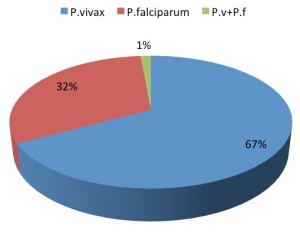 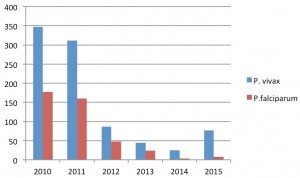 DISCUSSION: Malaria is an important parasitic infection affecting large populations residing in the endemic areas and continues to remain a serious public health problem in India; Western Uttar Pradesh is an endemic area for malaria parasites and accounts for high morbidity and mortality.

In this study, a majority of cases were found in the age group of 21-40 years, which correspond to other studies 10-11. The male to female ratio was found to be 1.27:1. The more involvement of males in day-to-day outdoor activity may be the reason of male preponderance 11-12. A total 1330 confirmed malaria cases were detected in nearly six years retrospective study. In this study sharp decline in positive malaria cases has been observed between year 2010 (534 out of 1330 cases) and in year 2014 (where only 34 cases were detected). This trend is also supported by WHO annual malaria report 1. Seasonal variations of malaria cases have been observed, maximum cases (419) were detected in month September and minimum cases (only 5 cases) were detected in month of March. The same trend with seasonal variation has been observed in a study from India 13.

Infections alone with P. vivax, P. falciparum and mixed infection (P. vivax and P. falciparum) were detected in this study. The P.vivax (67%) was found predominantly. This is supported by other studies where P. vivax was predominantly detected 14-16. Some studies show P.falciprum being predominant malarial parasite 17-18. The number of P. vivax cases has been sharply declined from year 2010 to year 2014 and minor rise in year 2015 as shown in Fig.4.

CONCLUSION: Malaria is still a major health problem in western part of Uttar Pradesh apart from other endemic areas of our country. In this study sharp declining trend of cases has been observed. Peak incidence of malaria cases was seen in month September. P. vivax was found as predominant malaria parasite followed by P. falciparum and mixed parasite infection.