ABSTRACT: Background: Currently, 23 drugs for treating drug-susceptible TB, MDR-TB, or latent TB infection are in Phase I, II, or III trials. Bedaquiline, Delamanid and Pretomanid are new approved drugs. Still, TB is more prevalent in many countries. So, ideally, the countries facing this problem should do extensive research. Aim: The aim of our study is to find the number of studies, their design, sponsorship, phase, and state-wise distribution of studies on tuberculosis in India. Methods: After receiving an exemption from the ethics committee. The search term used in the “Trial Search” section of the CTRI site was “tuberculosis” or “TB” and the variables were captured and analyzed by using descriptive statistics in SPSS 26. Result: A total 134 studies were found. 61.9% of studies were interventional type, 78% were institute funded, 59 studies involved drug use mostly in combination, 104 studies were conducted at a single center, and 45 studies took sample sizes ranging up to 100. Only 37% of studies' completion report was found. 18% of studies were on extrapulmonary tuberculosis. Conclusion: The majority of the studies were ongoing, randomized interventional, Institute-funded, single-centered pulmonary tuberculosis.

INTRODUCTION: Tuberculosis (TB) is one of the most ancient diseases of mankind, and it has evolved with humans for many years 1. Globally around 9.6 million new tuberculosis cases are diagnosed, and of them, India accounts for 2.2 million cases 2. Currently, 23 drugs for treating drug-susceptible TB, multidrug-resistant TB (MDR-TB) or latent TB infection are in Phase I, II or III trials. These drugs comprise 13 new compounds; three other drugs (Bedaquiline, Delamanid and Pretomanid) have already received regulatory approval, and seven are repurposed drugs.

Various combination regimens with new or repurposed drugs are in Phase II or Phase III trials 3. But there is still no single rapid, accurate and robust TB diagnostic test suitable for use at the point of care. Even having all the advances in treatment, tuberculosis has failed to find a cure in developing countries 3. The biggest challenge is an early and species-specific diagnosis of TB, detection of its drug resistance pattern and availability of highly active drug treatment, which is a short course, preferably a few weeks. The most desirable approach one can dream of is a potent preventive vaccine for prevention.

Unfortunately, we are not close to any of these 4. From primary TB, there has been the emergence of Multidrug resistance TB (MDR TB) and Extensive drug resistance TB (XDR TB) in India, which has led to more challenges in therapy. Existing treatments for MDR-TB are often highly toxic and poorly tolerated, placing patients at high risk of disability and death and curing them only about half the time. Treatment options are limited and expensive and recommended medicines are not always available 5. Geographically, most TB cases in 2018 were in the World Health Organization (WHO) regions of South-East Asia (44%), Africa (24%) and the Western Pacific (18%), with smaller shares in the Eastern Mediterranean (8%), the Americas (3%) and Europe (3%). Eight countries accounted for two-thirds of the global total: India (27%), China (9%), Indonesia (8%), the Philippines (6%), Pakistan (6%), Nigeria (4%), Bangladesh (4%) and South Africa (3%) 3. So, the countries facing the brunt should ideally do extensive research and set goals towards eradicating TB from the scene. But multiple attempts to eradicate TB have failed. So with this background in mind, we thought of the present study to find the number of ongoing and completed studies at the India site for tuberculosis.

Primary Objective: To analyze the type of studies undertaken with tuberculosis patients.

Setting: All the studies conducted with the tuberculosis theme in consideration registered under CTRI from its inception to Jan 2020 were reviewed and analyzed. The studies were searched in the “Trial Search” section with the “tuberculosis” or “TB” as a keyword by one of the author and confirmed by another author. Out of all the search results obtained, the studies conducted with the tuberculosis theme considered were chosen for further analysis. Data pertaining to the objectives were collected in the study-designed case record form. It was a 2 months study that included data collection and analysis from 15th Feb to 14th April 2020.

Ethics Permission: Institutional Ethics committee exemption was sought as the data is available in the public domain (EC/OA-08/2020). Data confidentiality and privacy were maintained.

The variables for capturing data were the number of studies, demographic details like age, gender, weight, socioeconomic status, area of research (therapeutic/diagnostic/surgical), the geographical distribution of studies, types of phases and study designs used, and whether observational or interventional, the status of study whether ongoing or completed, sponsored by pharmaceutical / academic / government-funded/NGO. 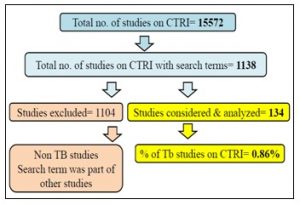 Demographics: From the total of 134 studies, 123 studies had taken patients belonging to age between 18-65 years, and 11 studies were conducted in up to 18 years.

10 studies had recruited only males and 6 had taken only females for their studies, while the rest 124 studies had taken either gender Table 1.

Study Registration: From the total 134 studies, all studies were registered prospectively except one which was registered retrospectively.

Study Type: 51 studies were the observational type of study, while rests 83 were interventional. Amongst these 83 interventional studies, 68 were randomized, and 11 were non-randomized types. 4 studies had not mentioned the type of intervention Table 2.

Study Site: 104 studies had a single study site, whereas 30 were conducted at multiple sites. Fig. 2 maximum studies (38 studies) were done in the southern part of India, especially in Tamil Nadu, and 35 studies in Karnataka.

Delhi had 31, Maharashtra had 26, and Uttar Pradesh had 13 studies. The least studies were done in West Bengal and Jharkhand.

Fig. 3 In Tamil Nadu, maximum studies were done in Christian Medical College, Vellore. Table 3 and other sites were like the School of Pharmaceutical sciences and many more. 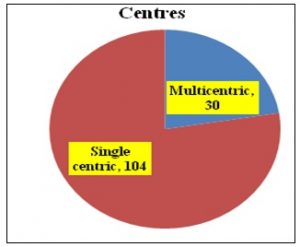 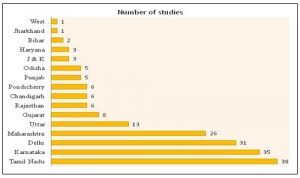 Funding Source: 78 studies were funded by the institute, 39 from the government of India, 14 from pharmaceutical companies, and 3 from Non-Government organizations (NGO). Fig. 4 From 78 Institute-funded studies, 56 were private hospital-funded studies. The rest were investigators initiated and were self-funded or institute funded. 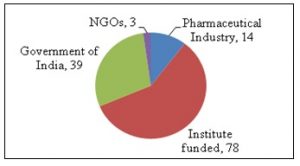 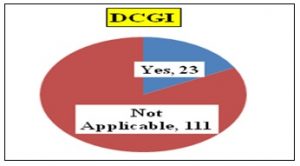 Type of Interventions: 74 studies were non-drug studies. 59 were drugs based, and 1 was a nutraceutical study. Amongst 59 drug-based, 28 were based on combination treatment Fig. 6. These various combination agents were used along with background regimens simultaneously. Table 4 Amongst non-drug, the majority were the diagnostic type studies Fig. 7. 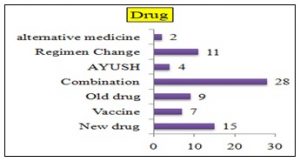 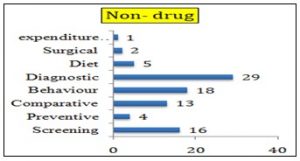 Study Phase: The study phase was not applicable for the majority of the studies. Table 6 2 studies were in phase I while 17 in phase II, 25 in phase III and 13 were in phase IV. Fig. 9 The two-phase I studies were vaccine comparison study and moxifloxacin or pyrazinamide comparative study with the standard antitubercular drugs in CNS tuberculosis. 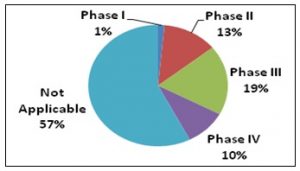 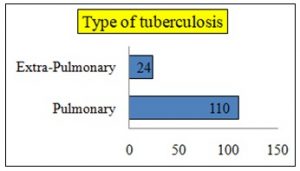 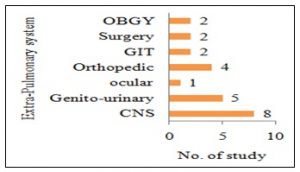 Study Status: 63% of studies are still ongoing, and 37% have completed their studies. None of the completed studies had an attached study report.

DISCUSSION: The study was done to find the volume of different studies planned to be undertaken in tuberculosis registered on the CTRI site. The majority of the studies were undertaken on 18-65 years old. As these are the age group affected by tuberculosis, the data resembles the facts. A study conducted by Rao showed that a large proportion of patients (65–68%) were in the young and reproductive age group. Approximately one-fifth of patients were in the geriatric age group 6. Many studies have included either gender, but ameta-analysis showed that tuberculosis prevalence was higher in males than females 7. Larger volume of studies has been prospectively registered, which is mandatory as per the Indian regulation 8. Initially, the registration was voluntary but later was made mandatory by the Drugs Controller General of India (DCGI) on 15 June, 2009.

Greater parts of the studies were interventional, and few among them were randomized. Regulatory studies are very few, and they are a treatment for MDR /XDR tuberculosis with newer drugs and their combination, and they were in different phases. Phase III studies were common as compared to other studies. The institute or government has funded most studies. Because government need to do research and bring newer techniques and drug combination to eradicate TB from India. But very few were sponsored by the pharmaceutical industry. As per the prevalence of TB in India, the research is not going hand in hand with the demand. Very few companies are involved in TB research as it is an unmet need of developing countries.

Only 59 studies were drug studies, and the rest were non-drug studies [preventive, diagnostic, behavioral, and diet studies]. Patient compliance is poor in tuberculosis, so many of them turn into resistant TB patients. We require new drugs to be tried as tuberculosis is rampant in drug resistance. The drugs tried are from newer drugs like [Bedaquiline, Delamanid, antimicrobials, anti-Tb drugs with antimicrobials], immuno-modulators included ayurvedic drugs aniasomnifera and vaccine studies. As per the Kwon YS review article, new drugs, and combination regimens are expected to increase therapeutic efficacy and shorten treatment duration in both drug-susceptible and drug-resistant TB 9. A bulk of the study had a sample size < 100, and they were unicentric studies, and 20 studies had a sample size > 1000 and were multi-centric. Sample size calculation may not have been carried out in less sample size studies.

Overall, 104 studies were unicentric, and 30 were multi-centric. South India dominated TB studies, and especially many studies happened in Tamil Nadu and Karnataka. In a prevalence finding study done on pulmonary tuberculosis, it was concluded that most of the studies were done in India and Tamil Nadu state had conducted a larger number of studies 7. One reason for huge research from south can be the dedicated center like NIRT in Chennai. The studies commonly found pulmonary tuberculosis, and in extrapulmonary TB (EPTB), CNS TB was the commonest.

Even in EPTB, males (272, 51.52%) contributed to fewer cases than females (256, 48.48%).10 Prevalence of TB was higher in males.11The male to female ratio in pulmonary tuberculosis patients was 2:1, which was also maintained when smearing positive and smear-negative were studied separately 6. The same meta-analysis also found that the tuberculosis prevalence was more in males as compared to females. During 2008–2017, 20,534 patients with TB were hospitalized in Beijing Chest Hospital, China. Of these patients, 62.6% (12,846) had pulmonary TB, 31.3% (6,433) had extrapulmonary TB and 6.1% (1,255) had concurrent extrapulmonary TB and pulmonary TB 12.

A study was conducted in the pediatric age group The male to female ratio was 1.1:1 (127 males: 115 females) 11, 13. Among 1267 cases registered for the treatment of all forms of tuberculosis, 528 (41.67%) had EPTB. Around half of the cases of EPTB (269, 51%) were among adult age groups, and the majority of cases (342, 64.77%) received Category-I treatment. Pleural TB was the commonest type of EPTB (n= 148, 28.03%), followed by lymph node TB (n = 131, 24.81%)10. Extrapulmonary disease was noted in 46%, which was predominantly meningeal, in a study conducted on young children 14. Many of the studies are still ongoing, and few have been completed, but the completion reports are not found on the site. The PI, once registered, does not go back to the site, or the CTRI site personnel are not following the PI for the complete report. CTRI aims to ensure that protocols and results of all registered trials are adequately reported and publicly available, enhancing public confidence in clinical trials, as Bhaskar SB 15.

CONCLUSION: Sizeable amount of research is happening on tuberculosis, as found on the CTRI site. But potential research is still awaited and corporate and government partnerships can help.