ABSTRACT: Breast cancer (BC) is the foremost cause of deaths among women worldwide. Plants contain diverse bioactive phytochemicals which have been explored by researchers all over the world for their cancer preventive potential. The present review tabulates in-vitro tested plants during 2014-17 against breast cancer cell line. We have collected data of 56 angiosperm families (117 plant species) which was subjected to cluster analysis. On the bases of IC50 values of plant extracts were clustered using cluster analysis Cluster analysis showed a grouping of order Brassicales, Fabales, Lamiales, Caryophyllales, Myrtales, and Apiales. It has been found that most of the plants tested against BC belong to eudicot group of plants. Active plant extract obtained after 24 h, 48 h and 72 h treatment were Mimosa caesalpinnifolia, Ferulago angulat, Magydaris tomentosa, and Ipomea batatas respectively. These plants may further be characterized for active ingredients to check their prospects in breast cancer treatment.

INTRODUCTION: Breast Cancer (BC) is the most prevalent cause of cancer-related deaths among women worldwide 1, 2, 3, 4, 5. Despite advances in its diagnosis and treatment options, the number of incidences is increasing every year 6, 7. The number of breast cancer cases reported in 2018 from the whole world was 20,88,849 amongst which 6,26,679 died 8. BC is not just one disease but has many variations and subtypes with distinct signatures and treatment programs 9, 10.

The early stage BC can be successfully cured, but treatment options are scarcely accessible to patients with advanced or metastatic stages 7. Women with mutated BRCA gene, have nearly 80% risk of developing BC along with a 50% possibility of their children getting the mutated gene 11. The genetic mutations in BRCA1 and BRCA2 genes suppurates the exigent root cause of patrimonial breast cancer 12. Although numerous causes are associated with the establishment and progression of BC, yet the oxidative stress (OS) is operating in most of the intracellular pathways concerned with cellular proliferation 13.

It has been reported repeatedly that the level of OS is higher for BC patients as compared to healthy people due to genetic abnormalities 1, 14. This elevated OS is beneficial for malignant cells as it upregulates the reactive oxygen species (ROS) mediated signaling pathways which encourage cell growth, cell differentiation, glucose synthesis, protein synthesis and hence cell survival. Numerous ROS are generated within the body as a result of basal metabolic activities. Hydrogen peroxide (H2O2) is one such ROS which is generated during estrogen metabolism, and it is known to activate extracellular regulated kinase 1/2 (Erk 1/2). Erk 1/2 is known to promote the survival of breast cancer cells in humans by activating downstream elements 15. Plant extracts being excellent scavengers of free radicals have often been implicated as a remedial measure in various diseases. The plant extracts contain numerous phytochemicals which act synergistically against disorders unlikely the purified compounds 16. Numerous well established anticancer drugs in use today have been derived from plants such as Sulphoraphane, Paclitaxel, Epipodophyllotoxin, Vincristine, Vinblastin, Vinorelbine, Vindesine, Vinflunine, Pomiferin, Roscovitine, Flavopiridol, Noscapine 17, 18, 19. In light of the significant contribution of phytochemicals in cancer treatment, the present review was designed to compile the in-vitro antiproliferative activity of various plant extracts against breast cancer cell line.

2.2. Presentation of Collected Data: The collected data was presented in the tabulated form. Various parameters selected for the present work were a plant, family, plant part used, the solvent used for extraction, assay employed and IC50 concentration.

2.3. Data Analysis: Cluster analysis was done by using PAST software applying Ward’s method, and Euclidian distance was calculated and presented as a measure of similarity.

3.2.1. CA of AG24: AG24 involved 31 plant species belonging to 23 families. The CA of AG24 revealed a clustering of Crateva adansonii (Capparaceae) with Moringa oliferna (Moringaceae) both belonging to order Brassicales and Mimosa caesalpiniifolia with Eythrina excelsa which belong to family Fabaceae and order Fabales Fig. 1. The minimum IC50 value was found in Momosa caesalpiniifolia (5.0 µg/ml) while maximum IC50 in Leptadenia reticulata (740 µg/ml).

3.2.3. CA of AG72: The AG72 group had 27 plants which were spread across 16 families. The CA presented aggregation of families belonging to order Lamiales and Myrtales. The plants belonging to order lamiales were Stachys persica, Stachys pubescens and Stachys byzantinai.

Exposure to ionizing radiations especially during breast development elevates the risk of developing breast cancer which can be avoided by lessening repetitive needless testing 29, 30. Lopsided work schedule of women in developing as well as developed nations have also been positively correlated to increased breast cancer incidences 31. Table 3 and Fig. 5 compares the number of breast cancer cases reported their percentage of mortality in different countries. 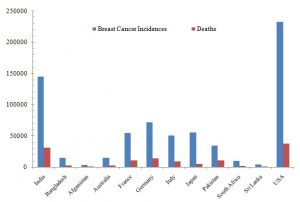 CONCLUSION: It has been concluded that most of the plants tested against breast cancer cell line belong to eudicots. Above ground plant parts showed better antiproliferative activity as compared to below ground plant parts. Active plant extract obtained after 24 h, 48 h and 72 h treatment were Mimosa caesalpinnifolia, Ferulago angulat, Magydaris tomentosa, and Ipomea batats. These plants must be characterized for active ingredients which can further be used in-vivo studies in animals induced with breast cancer to find out their prospects in breast cancer treatment.