Categories Menu
Home » A REVIEW ON DIABETIC NEUROPATHY AND NEPHROPATHY

A REVIEW ON DIABETIC NEUROPATHY AND NEPHROPATHY

A REVIEW ON DIABETIC NEUROPATHY AND NEPHROPATHY

Diabetes is a major public health problem. Diabetes mellitus now affects large number of people in many developing countries than western countries where only two or three percent of the population is affected. With on estimated 33 million people in India alone affected by diabetes. It is a major epidemic of the twentieth century. Diabetes is a chronic disorder, which is associated with obesity, hypertension, advancing age, accumulation of harmful agents in the vascular endothelium causing development of microangiopathies or micro vascular complications. These complications include peripheral neuropathy, nephropathy and retinopathy, which cause early death and increased morbidity. These complications vary in prevalence in different populations depending on various factors such as genetic predisposition and ethnicity. Besides these complications cardiovascular changes are also occurring. Peripheral neuropathy (PN) is characterized by pain, numbness, and tingling in the extremities with slow nerve conduction. Up to 50% of all patients with diabetes develop neuropathy and the prevalence of painful neuropathy ranges from 10 to 20% of patients with diabetes. Diabetic nephropathy is characterized by increased urinary protein, loss of renal function, excessive deposition of extracellular matrix proteins in the mesangium, and clear cytoplasm of the proximal tubular epithelial cells due to excessive reabsorbed glycogen. Evaluation of diabetes and its complications is very essential for proper control and prevention of the disease associated complications.

INTRODUCTION: Diabetes mellitus is a disease which is characterized by increased blood glucose levels known as hyperglycemia due to abnormality either in insulin secretion, insulin action, or both. The severe hyperglycemia of diabetes leads to long-term damage, abnormality in function, and failure of major organs, especially the nerves, kidneys, eyes, heart, and blood vessels. Several pathogenic mechanisms are involved in the development of diabetes 1.

The prevalence of diabetes is rapidly increasing all over the world. The stage of diabetes has been changed mainly by affecting earlier aged people and number of deaths increased yearly. The diabetic population is increasing due to population growth, stress, food habits, obesity and decreased physical activity 2.

India leads the world with largest number of diabetic individuals and termed the “diabetes capital of the world”. According to the Diabetes Atlas 2006 published by the International Diabetes Federation, the number of people with diabetes in India currently is around 40.9 million and it may rise to 69.9 million by 2025 if preventive measures are not taken 3.

The difference in the prevalence rate of diabetes between urban and rural was found in which environmental factors had a significant role to play [4]. Untreated diabetes mellitus leads to increased prevalence of micro vascular and macro vascular diseases. With the increased diabetic population, the number of people suffering from the vascular complications of diabetes will also increase 5. Genetic factors also may play a role in individual susceptibility to diabetic neuropathy and also nephropathy.

Type I diabetes is a multifactorial autoimmune disease due to severe insulin deficiency that is influenced by environmental and genetic factors. Type II diabetes is a non immune disorder with varying degrees of insulin resistance and impaired insulin secretion usually associated with obesity. Although there is difference in causation of both types of diabetes, it has been assumed that the neuropathy of types I and II diabetes result in hyperglycemia. But there are structural and electro physiologic differences exist between these two types of neuropathies, at least in experimental animals 6.

The 10 countries estimated to have the highest numbers of people with diabetes in 2010 are represented in fig. 1. In the light of the observed increase in prevalence of obesity in many countries of the world and the importance of obesity as a risk factor for diabetes, the number of cases of diabetes in 2030 may be considerably more which leads to neuropathy and nephropathy 2. 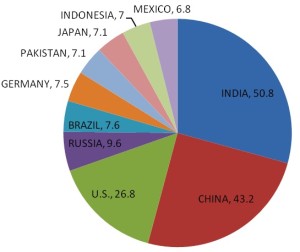 Types of Diabetes: There are two types in diabetes mellitus.

Type 1 Diabetes (previously known as insulin-dependent diabetes mellitus-IDDM- or juvenile-onset diabetes): In type 1 diabetes, there is deficiency of insulin due to autoimmune destruction of B cells. Insulin treatment is needed for such patients as they are prone to diabetic ketoacidosis. Type 1 diabetic patients are usually young (children or adolescents) and not obese when they first develop symptoms. Studies of identical twins have shown that genetically predisposed individuals must additionally be exposed to an environmental factor such as viral infection (e.g. with coxsackievirus or echovirus). Viral infection may damage pancreatic B cells and expose antigens that initiate autoimmune process. The patient becomes overtly diabetic only when more than 90% of the B cells have been destroyed.

Type 2 Diabetes (previously known as non-insulin-dependent diabetes mellitus-NIDDM-or maturity-onset diabetes):Type 2 diabetes is associated with insulin resistance and impaired insulin secretion, both of which are important in its pathogenesis. Such patients are often obese and the incidence rises progressively with age as B-cell function declines.

Diabetic Neuropathy: Diabetic neuropathy is a loss of neurons or damage of nerves either in lower extremities or in other organs. Pathological changes may occur by loss of small and large nerve fibers and also axonal degeneration.

Pathogenesis: The accurate pathogenesis of diabetic peripheral neuropathy is not known; but might be due to multifactors. Pathogenesis of neuropathy has shown in simplified manner in fig. 3. The possible etiologic factors include hyperglycaemia, polyol pathway, non-enzymatic glycation, free radicals and oxidative stress. Generally nerve functions are associated with glycemic control, metabolic and neurophysiological alterations due to hyperglycaemia, lipid levels in serum, vascular coagulation abnormalities 8. 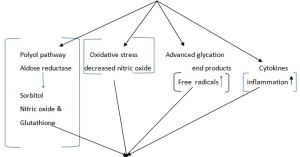 Role of Polyol Pathway: Conversion of glucose to sorbitol by aldose reductase enzyme and convertion of this sorbitol into fructose by sorbitol dehydrogenase is known as polyol pathway. Generally glucose gets metabolized through phosphorylated oxidation in mitochondria and produce ATP energy but under hyperglycemia excessive glucose converted by the enzyme aldose reductase and NADPH as coenzyme into sorbitol. Due to NADPH insufficiency NO synthesis is altered which leads to vascular insufficiency and excess production of free radicals and causes nerve damage 9.

Diabetic nephropathy remains leading cause of ESRD in United States, in 2002, 45% of incident ESRD due to nephropathy, resulting from increased prevalence of type 2 diabetes 41% of prevalent ESRD from DN.

Incidence of DN in type 1 diabetic patients has been declining, which may be related to early and aggressive control of blood glucose and blood pressure 10.

About 10% of diabetic patients associated with hypertension have a renal artery stenosis, and in 40% of the cases, the lesions are bilateral. Moreover the prevalence of renal artery stenosis increases with age, and stenosis of more than 75 % more frequent over in the older age in comparison with younger subjects 11.

The metabolism of glucose through harmful alternate pathways, such as via PKC activation and advanced glycation end-product formation, in the setting of hyperglycemia also seems to be partly dependent on reactive oxygen species.

Diabetes, aging and hypertension strongly influence to form vascular and glomerular lesions. These three factors play respective roles of according to age and to the presence or absence of microalbumin levels. However, it is very difficult to estimate or evaluate in some patients but more kidney diseases are related to diabetes frequently 14.

Initially control of diabetes is essential and new powerful medications have to be discovered for the treatment of diabetes as well as its complications.