ABSTRACT: Poor aqueous solubility has been one of the major challenges in modern drug delivery as it hinders the absorption process leading in the decrease of bioavailability. As a consequence of low water solubility of drugs, low oral bioavailability is a growing challenge to the development of new pharmaceutical products. There has been a consistent increase in the number of new pharmacologically active lipophilic compounds that are poorly water-soluble. Approximately 40% of new drug candidates are lipophilic and exhibit poor water solubility. One of the popular approaches of oral bioavailability and solubility enhancement is the utilization of lipid-based drug delivery systems - self microemulsifying drug delivery system (SMEDDS). Self-micro emulsifying drug delivery system (SMEDDS) is one of the exclusive approaches to increase bioavailability by improving solubility for the poorly aqueous soluble drug and to increase the oral absorption of highly lipophilic drugs. These systems have unique property to form oil in water emulsion under gentle agitation provided by digestive motility of the stomach and intestine. A greatest advantages of incorporating poorly soluble drugs into such formulations is their spontaneous emulsification and formation of a microemulsion in aqueous media. This review gives an overview on SMEDDS focuses on properties, components and different types of the lipid-based drug delivery system for oral use with their characteristics thus enabling a broader perspective and understanding of their present role in medicine and drug delivery.

INTRODUCTION: Oral drug delivery has been known for decades as the most widely utilized route of administration among all the routes that have been employed for the systemic delivery of drug via various pharmaceutical products of different dosage forms.

The oral route has been the major route of drug delivery for chronic treatment of many diseases as it is the most cost-effective and leads the world wide drug delivery market.

In the present scenario, oral drug delivery is continuously looking into newer avenues as mostly 40% of new drug candidates have poor water solubility and absorption, high fluctuation in the drug plasma level and lack of dose proportionality which are playing major role in obtaining results leading to failure of conventional drug delivery system. 1, 2 Due to have low solubility of drugs, this leads to low dissolution and therefore limits the absorption. To overcome this dilemma, some clinical formulations have been developed, but low oral bioavailability of most drugs is still a major obstacle leading to challenges for pharmaceutical manufacturers to design delivery systems that can be improved by increasing its gastrointestinal solubilization with modification of pharmaco-kinetic action and therapeutic responses. 3

In Pharmaceutical industry continuous innovation is one of the most defining characteristics. Most of the newly discovered drug candidate limits the bioavailability of orally administered drugs 4. The fact that 40% of new chemical entities discovered are lipophilic in nature with poor aqueous solubility, it hinders the absorption process leading in the decrease of bioavailability, which, signifies the need of suitable drug delivery approach for optimal benefit.

Various formulation techniques such as solid dispersion/amorphous formulation, micronization and lipid-based formulations such as of micro-emulsion are considered to deliver the drug in a more prominent way. Among these, micro-emulsion formulations, with a notable emphasis on self-micro-emulsifying drug delivery system (SMEDDS), have gained much more importance as a promising drug delivery system for both soluble as well as poorly water soluble drugs in recent times as these are advantageous in the aspect of their stability, self-dispersing nature, ease of preparation, and scale-up. 5, 6

The emulsification process requires little entropy change which is obtained from the peristaltic motion of gut. SMEDDS form transparent micro emulsions with a droplet size below 100 nm upon dilution is a promising alternative for conventional oral emulsions because of its ability to be delivered specifically with greater efficacy and relatively high stability 7. 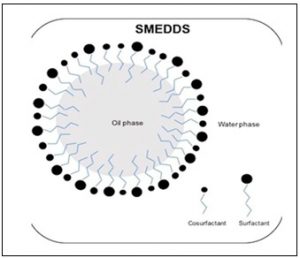 Advantages: SMEDDS being a novel and versatile approach to improve water solubility and ultimately bioavailability of lipophilic drugs has numerous advantages:

Drug Transport Mechanism of SMEDDS: SMEDDS partially avoids the additional drug dissolution step prior to absorption in the GI tract. They increase the amount of solubilized drug in the intestinal fluids resulting in good drug absorption. Absorption of the drug may also be enhanced by using lipid based excipients in the formulation. Once they reach the GIT, they undergo three processes; i.e,

During digestion, SMEDDS form a coarse emulsion, which undergoes enzymatic hydrolysis at oil water interphase and thereby gets ready for absorption phase. After formation of mixed micelles, due to interaction of fatty acid with bile, digestion process stops. The next phase of drug absorption then starts.

These colloids are taken up by passive diffusion or active transport through enterocyte membrane. Some drugs may get absorbed via lymphatic circulation through chylomicrons. In circulatory phase, drug is released from chylomicrons and the residual lipid is used in body 21. 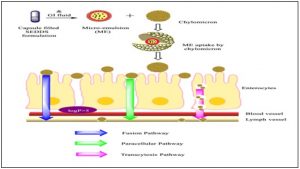 Mechanism of Self-Emulsification: The self-emulsification process occurs due to the entropy change in the SMEDDS system which is provided by the peristaltic movement in the gut wall. At this point, the energy produced by the randomness of a molecule (entropy) is greater than the energy required to increase the dispersion surface area. Soon after gentle shaking of a self-emulsifying system within the GI medium, the water instantly penetrates to the aqueous core leading to interface disruption and micro-droplet formation. In conventional emulsion formulation, free energy is directly proportional to the energy required to create new surface within two phases of the system. The equation can be given as:

Where ΔG is the associated free energy in the process, N is numbers of the droplet with radius "r", and "σ‟ is interfacial energy with time.

In order to decrease the interfacial area and simultaneously the free energy of the system, phases of emulsion will have a high affinity to separate. Here, in a self-emulsifying system, the free energy required to form the emulsion is very low, positive or negative thus the emulsion process occurs spontaneously. Very small amount of energy required for the emulsification involves the destabilization through concentration of local interfacial region 22.

Non-ionic Surfactants: where the hydrophilic group carries no charge but derives its water solubility from highly polar groups such as hydroxyl or polyoxyethylene (OCH2CH2O). Examples: Sorbitan Ester (Spans), Polysorbates (Tweens).

(2) Construction of Pseudo Ternary Phase Diagram: The pseudo ternary phase diagrams will be constructed using the water titration method. A series of Emulsions will be prepared by varying mass ratio of oil to Smix from 9:1 to 1:9. The ratio of Tween 80 to PEG 400 will be optimized by varying their mass ratio from 1:0, 1:1, 2:1, 3:1, to 4:1.

Each pre-concentrate mixture will be titrated drop-wise with distilled water at room temperature and agitated after each drop. The end point of the titration will be taken as the point when the solution become cloudy and turbid, and the quantity of water required will be recorded.

(i) Drawa line that is parallel to CB from point O towards AB. The point where this line intersects with AB indicates the percent composition of A at point O(X).

(iii) Similarly, the percent composition of C at point O can be known by drawing a line that is parallel to AB towards AC (Z). 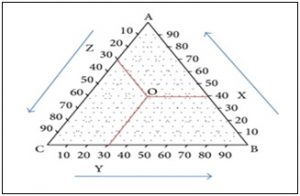 FIG. 3: TERNARY DIAGRAM INDICATING THE COMPOSITION OF A, B, AND C AT POINT O

Preparation of SMEDDS: The preparation involves the addition of drug to the mixture of oil, surfactant, and co-surfactant and then it should be subjected to vortexing 34. In some cases, drug is dissolved in any one of the excipients and the remaining excipients are added to the drug solution 35. 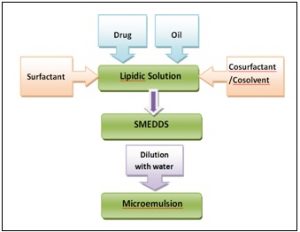 Solidification Techniques for Transforming Liquid Smedds to Solid SMEDDS: SMEDDS mainly exist in two forms either liquid or solid form. Most of the SMEDDS are limited to liquid dosage forms, because many excipients used in SMEDDS are not solids at room temperature.

However, liquid SMEDDS formulations can also be solidified to improve stability, reproducibility, and patient compliance as few issues may take place when filled in capsules such as the incompatibility of components with the capsule shell when kept for long term.

Different techniques are used for conversion of liquid SMEDDS into solid SMEDDS such as encapsulation of liquid and semisolid SMEDDS, spray drying, adsorption to a solid carrier, melt extrusion etc. 47

CONCLUSION: Self-microemulsifying drug delivery systems are recent and effective approach for the augmentation of oral bioavailability of many poor water soluble drugs provided that the drug should be potent with high lipid solubility. Some bioactive molecules have poor aqueous solubility, limited dissolution rate and low bioavailability creating different problems during formulation. The presence of only a few drugs products formulated as SMEDDS made available into the commercial market signifies the difficulties in formulating poorly water-soluble drug compounds into such formulation. Self- emulsifying drug delivery system is the most promising approach for formulation in case of such a drugs. The low solubility nature of drug makes them less soluble and bioavailable. Formulating drugs in a microemulsion form is a facile method for enhancing their solubility and bioavailability. Self-micro emulsifying drug delivery system (SMEDDS) has in recent times emerged as one of the most fascinating approaches to improve the solubility, dissolution and oral absorption for poorly water-soluble drugs. The fact of SMEDDS being one of the novel and versatile approaches to improve the bioavailability of approximately 40% of poorly water-soluble drugs implies that the study on SMEDDS must continue so that more drugs compounds formulated as SMEDDS will reach the pharmaceutical market in near future.

ACKNOWLEGEMENT: Authors are thankful to the institute for providing us the facilities required for the concern work.