A REVIEW ON DOXORUBICIN INDUCED CARDIOTOXICITY AND ITS MOLECULAR MECHANISM

A REVIEW ON DOXORUBICIN INDUCED CARDIOTOXICITY AND ITS MOLECULAR MECHANISM

ABSTRACT: Doxorubicin (DOX), an anthracycline antibiotic that is highly used for cancer treatment (chemotherapy), but its chemotherapeutic application is limited due to its cardiotoxicity. The major mechanism of doxorubicin action as the free radical formation and as an inhibiter of topoisomerase II and other signaling pathways is also invoked significant consequence for the cardiomyocyte. But the years of clinical use of doxorubicin generates a need for monitoring the procedure of cardiotoxicity as well as understanding its potential. Peak plasma concentration plays a key role in causing cardiotoxicity and antineoplastic activity. There are two mechanisms, the first one is anti-tumor action, and second one is cardiotoxicity. Cardiotoxicity mechanism has several pathways 1) formation of reactive oxygen and nitrogen species 2) interaction of calcium overload 3) disturb the serum biomarker levels 4) DNA damage. These are the main pathways to cause cardiotoxicity. Some signs and symptoms are given to identify doxorubicin cardiotoxicity like echocardiographical changes, angiographic changes, and disturbance in the serum biomarkers level like GSH, LDH and CK-MB. Some drugs are used to minimize the cardiac side effects like dexrazoxane and rimonabant like drugs administered before the doxorubicin administration but there are some limitations due to its serious side effects. Antioxidant therapy may be the right option for the prevention of doxorubicin cardiotoxicity because the main cause of cardiotoxicity is oxidative stress. So, this review suggested that during the treatment of cancer patients with doxorubicin, cardiovascular monitoring is necessary for patient safety, and further studies are required to add some antioxidant therapy with doxorubicin to prevent patients from the cardiac toxicity.

INTRODUCTION: Doxorubicin is the most effective antineoplastic drug which is widely used to treat several types of tumor-like gastric, breast, ovarian, lungs, and thyroid 1. Anthracycline antibiotics are isolated from cultures of Strepto-myces peucetius var. Caesius and first time used as a cytotoxic drug in 1969 2.

The first drug of this class is daunorubicin (trade name daunomycin), and other clinically useful anthracyclines are doxorubicin, epirubicin, and idarubicin 3. Clinical use of doxorubicin is limited due to its specific cardiac toxicity.

It is characterized by asymptomatic changes in the electrocardiogram (ECG) while the cardio-myopathy grows is highly dose-dependent 5. Cardiotoxicity may be possible at a low dose depends on individual susceptibility 6.

The cardiotoxic effects induced by anthracyclines may be divided into two forms acute/ sub-acute in which cardiomyopathy can occur in the first few weeks after the chemotherapy and a chronic form in which cardiotoxicity observed. Sometimes arrhythmias can be produced by anthracyclines with or without heart failure. Secondly, the late-onset form of cardiotoxic effect of anthracyclines may appear years after the completion of treatment 6-7. Doxorubicin-induced cardiomyopathy can be observed with any of the following manifestations; tachycardia, hypertension, transient arrhythmias or late-onset cardio-myopathy in the form of fatigue, lower limb edema, and dyspnea 8.

Chemical Structure: Anthracycline antibiotics are produced by a mutated strain of streptomyces peucetius. Doxorubicin (DOX) has a naphtha-cenequinone (anthracenedione or dioxoanthracene) nucleus and daunosamine (amino sugar).

Doxorubicin contains hydrophilic and hydrophobic both type of nature, which allows it to bind with plasma protein and cell membrane. 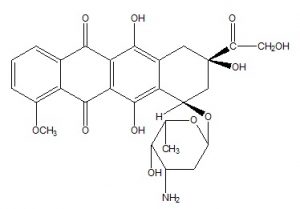 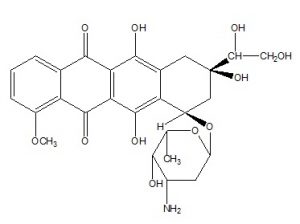 DOX also maintains amphoteric nature in both acidic and basic medium. Due to all these properties, DOX is a versatile compound that allowed you to enter in the various cellular compartments.

Doxorubicinol is the cellular metabolite of DOX and contains biological activity 14. DOX can also be reduced to a semiquinone radical by many of the oxidoreductases enzymes. Reoxidation starts the production of reactive oxygen species (ROS).

Alternative liposomal encapsulated formulation of doxorubicin has been developed to reduce the cardio-toxicity 15.

Mechanism of Action: The anthracyclines are antibiotic agents who have antineoplastic action results from the inhibition of the nucleic acid synthesis by binding to both strands of the deoxyribonucleic acid (DNA) helix. This binding prevents the normal function of the ribonucleic acid (RNA) and DNA polymerase. 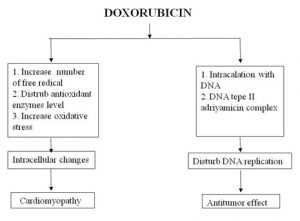 FIG. 1: DISTINCTION BETWEEN THE CARDIOTOXIC AND ANTITUMOR MECHANISM OF ACTIONS OF DOXORUBICIN

Antitumor Action: It was observed that Adriamycin (Doxorubicin) produces free radicals; it was reported that free radical forming activity of adriamycin responsible for antitumor action 18. The formation of free radicals in some cancer cells as well as in some other cell types due to established high concentrations of adriamycin 19. Other evidence clear the concept of free radical-mediated antitumor action as adriamycin makes a complex with iron, and this complex easily bind with DNA. Due to this complex formation, oxygen production is stimulated 20. These radicals are formed in the neighborhood of DNA strands 21 and free radical-induced DNA damage, and also strand breaks are briefly described in literature 22.

At lower concentration, adriamycin shows the clinically useful mechanism of action, a low dose of DOX breaks the DNA strand which is mediated by protein (DNA topoisomerase II) 26, at higher concentration of DOX, cells died mainly due to directly DNA strand breaks, it is not protein associated strand break 15.

It also accelerates lipid peroxidation that damages the cell membrane and other cellular components 29. DOX can stimulate nitric oxide production, which is associated by dilated cardiomyopathy and congested heart failure 39. The reaction between NO and superoxide (H2O2) produces peroxynitrite (ONOO-), known to cause DNA damage 30.

Oxidative stress increase due to the formation of reactive oxygen species and nitrogen species, calcium overload associated mitochondrial damage, and increases the level of enzymes like GSH, SOD, and Catalase. Doxorubicin also induces apoptosis by DNA damage and interaction in the formation of mitochondrial DNA synthesis, inhibits caspase-3 activation and apoptosome formation, and inhibits phosphorylation and activation of JNK, P53, and bax apoptotic pathway. 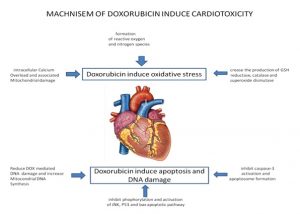 Physical Examination: In acute cases of doxorubicin-induced cardiomyopathy and heart failure, doctors monitor electrocardiogram before start the treatment 35. However, the signs and symptoms of doxorubicin-induced cardiotoxicity are like as shortness of breath, pleural effusion, pulmonary rales, gallop rhythms, tachycardia, jugular-vein distention, edema of the ankle and hepatomegaly, but these signs and symptoms are very common to many pathological conditions and not specific for doxorubicin induce cardiotoxicity 32.

Electrocardiographic Changes: In DOX-induced cardiomyopathy first and most commonly detectable sign is tachycardia and later some electrocardiographic features are seen like flatting of the T wave, prolongation of the QT interval and loss the voltage of R wave but these changes are not specific for DOX-induced cardiomyopathy so the clinicians should not start his treatment on the basis of these ECG changes 33.

Echocardiography and Angiocardiography:  Risk for DOX-induced cardiotoxicity is very high and can be divided as acutely during chemo-therapeutic sessions and chronically weeks to years after the session. Several standard approaches of cardiology are applied to the detection of cardio-toxicity, and one of the very important approaches is echocardiography and angiocardiography. In which heart structure is visualized, so the detection of cardiac dysfunction is very easy via measurement. Radionuclide angiography, when performed serially before, during and after treatment, is more sensitive to changes in cardiac function 34.

Treatment and Prevention of Cardiotoxicity: Doxorubicin is widely used as a chemotherapeutic agent that can protect cancer patients from different types of cancer. Several cardioprotective agents have been used for the treatment and prevention of doxorubicin-induced cardiotoxicity. To date, dexrazoxane proved to be a highly effective drug directly compete with topoisomerase II. It reduces oxidative stress and prevents the bio serum enzyme level. Dexrazoxane is also called Zinacard (Pfizer pharmaceutical New York, NY) it is accepted to give with doxorubicin in the treatment of cancer patients when doxorubicin dose exceeds from 300 mg/m2.

Now, it is most common protocol 36. Administration of doxorubicin with sildenafill (phosphodiesterase 5 inhibitor) shows less apoptotic chance compare to the single use of doxorubicin 37.

One another preexisting available drug is rimonabant (cannabinoid 1 receptor antagonist), which is used in Europe for weight loss 38. Other antioxidant compounds like flavonoids and probucol can reduce the incidence of cardiotoxicity 39. Probucol is the powerful antioxidant previously used to treat various types of cardiovascular diseases in preclinical studies 40, 41.

Restriction for Available Treatment: Dexra-zoxane is the only drug that has the FDA approval for the protection from the doxorubicin-induced cardiotoxicity and widely used drug, which is given before administration of doxorubicin treatment for the cardiac protection 42 but there are some restrictions. In July 2011, the Europan Medicines Agency (EMA) published a statement in which EMA clearly says about the restricted use of dexrazoxane only in adults who take doxorubicin more than 300 mg/m2 for cancer treatment 42, 43. Dexrazoxane exhibits harmful effects on unborn babies or causes birth defects if the mother and father receive this medicine. Birth control required six months for a woman and three months required for man after taking last dose 42.

Rimonabant is the second drug that is used to treat cardiac toxicity of doxorubicin, but this drug is withdrawn in 2008 worldwide due to its serious psychiatric side effects. So, antioxidants have been used without any side effects when we are using as cardioprotective agents in cancer patients who take doxorubicin dose more than 300 mg/m2.

Especial monitoring required in the patients who take any medicine which can cause cardiac side effects. According to the American Society of cardiologists, the cardiovascular status of a cancer patient must be monitored when we start chemotherapy; it may be helpful to develop heart failure. This review suggests that an antioxidant can help to reduce the cardiac side effects of doxorubicin. So, this review suggested that further study is required because some high antioxidant compounds therapy can reduce the cardiac event when doxorubicin is given to the cancer patient as chemotherapy.

ACKNOWLEDGEMENT: The authors are very grateful to all faculty members of the R.V. Northland Institute for their constant support and help.

CONFLICTS OF INTEREST: The authors declare that they have no conflict of interest with a financial or non-financial interest in the subject matter or materials.