Vitex negundo is an important medicinal plant with potent anti-inflammatory activity. The major constituents of this plant are flavonoids, casticin, chryso-splenol and vitexin, Chrysophenol D, nishindine and hydrocotylene. It also contains monoterpenes agnuside, eurostoside, and aucubin. These constituents contribute various pharmacological activities as anti-inflammatory, antioxidant, antinociceptive, anti-ulcer, free radicals scavenging, hepatoprotective and many more. This review discuss the investigation made by various workers related to its ethnobotanical claims, ayurvedic properties, chemical constituents, pharmacological activities ,analytical studies and other aspects considering this plant since years till date.

INTRODUCTION: Vitex negundo (VN) Linn. belongs to family Verbenaceae commonly known as Nirgundi. It is a large, aromatic shrub; with typical five foliate leave pattern found throughout the greater part of India at warmer zones and ascending to an altitude of 1500 m in outer, Western Himalays. The shrub is one of the common plants used in Indian medicines. It has been claimed to posses many medicinal properties. It contains the various chemical classes such as alkaloids, tannins, flavonoids, carbohydrates, & tannins. Traditionally leaves reported to posses tranquilizing effect, insecticidal properties and lay over grain to ward off insects. The extracts of the leaves showed antibacterial activity against Micrococcus pyogenes var aureus and E.coli.

Ethnobotanical claim: Chasteberry has been used since ancient times as a female remedy. One of its properties was to reduce sexual desire, and it is recorded that Roman wives whose husbands were abroad with the legions spread the aromatic leaves on their couches for this purpose. It became known as the chasteberry tree. During the middle ages, Chasteberry's supposed effect on sexual desire led to it becoming a food spice at monasteries, where it was called "Monk's pepper" or "Cloister pepper." In tradition, it was also known as an important European remedy for controlling and regulating the female reproductive system. Long used to regularize monthly periods and treat amenorrhea and dysmenorrhea, it also helped ease menopausal problems and aided the birth process.

Plant description: Deciduous shrub, growing to 3m at a medium rate. It is hardy to zone 8. It is in flower from September to October. The scented flowers are hermaphrodite (have both male and female organs) and are pollinated by Insects. The plant prefers light (sandy) and medium (loamy) soils, requires well-drained soil and can grow in nutritionally poor soil. The plant prefers acid, neutral and basic (alkaline) soils. It cannot grow in the shade. It requires dry or moist soil (Figure 1). 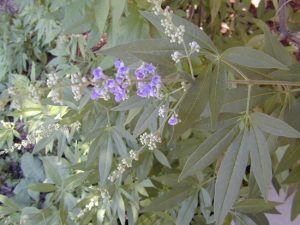 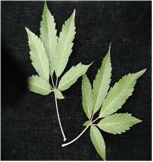 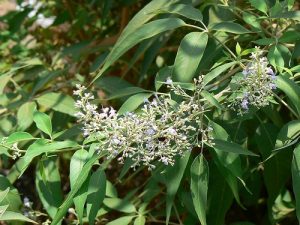 The major constituents of the leaf oil were α-pinene (35.9%), limonene (12.2%) and bicyclogermacrene (9.5%), while the fruit oil contained α-pinene (31.7%), bicyclogermacrene (14.5%) and limonene (11.5%), and the flower oil contained α-pinene (14.7%), bicyclogermacrene (8.3%) and limonene (5.8%). Two new phenyldihydronaphthalene- type lignan glucosides, vitecannasides A (1) and B (2) were isolated from the fruit of Vitex along with the six known lignan derivatives (3-8), four known iridoid glucosides (9-12), three known flavonoids (13-15), and one known phenylbutanone glucoside (16). Their chemical structures were determined on the basis of spectroscopic data as well as chemical evidence. The scavenging effect of 1, 2, and 11-16 on the stable free radical 1, 1-diphenyl-2-picrylhydrazyl was examined. Compounds 1, 2, 14, and 15 exhibited stronger activity than that of l-cysteine. Especially, 14 and 15 showed more potent activity than that of α-tocopherol.

Uses: The whole plant is used for medicinal purposes. The leaves are astringent, febrifuge, sedative, tonic and vemifuge and used in diffusing swellings of the joints from acute rheumatism. The juice of the leaves is used   for removing foetid discharges and worms from ulcers, while oil prepared with the leaf juice is applied to sinuses and scrofulous sores. The dried fruit is vermifuge and used in treatment of angina, colds, coughs, rheumatic difficulties etc.

The fresh berries are crushed to a pulp and used in the form of a tincture for the relief of paralysis, pains in the limbs, weakness etc. The root is expectorant, febrifuge and tonic and used in treatment of colds and rheumatic ailments. The whole plant is said to be a malarial preventive and is also used in treatment of bacterial dysentery. The extracts of the leaves have also shown bactericidal and antitumor activity. The leaves are used to repel insects in grain stores. Extracts of the leaves have insecticidal activity. The fresh leaves are burnt with grass as a fumigant against mosquitoes. A decoction of the stems is used in the treatment of burns and scalds.

CONCLUSION: Vitex negundo have been meticulously studied for its chemical constituents   and pharmacological studies. Taking into account its anti-inflammatory and anti-tumour and anti-arthritic and anti-ulcer activity plant is of great importance. However   lot of investigation could be made in the field of tissue culture and biotechnology o improve the yield of require chemical constituents within the plant .Few toxicological and analytical studies have been reported. The work could also be done in this direction to ensure free utilty of this plant.