ABSTRACT:Heliotropium indicum Linn., commonly known as ‘Indian heliotrope’ is very common in India with a long history of traditional medicinal uses in many countries in the world. The plant is reported to possess antibacterial, antitumor, uterine stimulant effect, antifertility, wound healing, anti-inflammatory, antinociceptive and diuretic activities. Several pyrrolizidine alkaloids have been isolated from this species. The active principle Indicine-N-oxide has reached Phase 1 clinical trials in advanced cancer patients.  But severe toxic side-effects showed that a therapy with indicine-N-oxide was not justiﬁed. Most of the alkaloids are hepatoxic and therefore internal use of Heliotropium species is not recommended. External application to promote wound healing and to fight infections seems to be less hazardous, but more research is needed. The comprehensive account of the chemical constituents and the biological activities are presented in this review such that the potential use of this plant in various traditional medicines can be systematically evaluated.

INTRODUCTION: The name "heliotrope" originates from the old idea that the inflorescence of these plants turned their rows of flowers to the sun. The meaning of ‘helios’ in Greek is ‘sun’ and ‘tropein’ from where the word ‘tropium’ is derived means ‘to turn’ 1.

Heliotropium indicum Linn. (Fig. 1) belongs to family Boraginaceae. This family is well marked in their characteristics and not easily confused with any other.A majority of the plants in the family are herbs. Several heliotropes are popular garden plants and some others occur as weeds.

The genus Heliotropium comprises about 250 species and is distributed in tropical, subtropical and warm temperate zones of all continents 2 but only a few species have been systematically investigated.

Heliotropium indicum Linn., commonly known as ‘Indian heliotrope’ is very common in India and some parts of Africa and Bangladesh, but also found in other countries. It is a coarse foetid herb, up to 2 ft. high, with ascending hirsuit branches found throughout India in sunny localities, on waste lands and anthropogenic habitats in periodically desiccating pools and ditches and anthropogenic habitats, generally below 800 m altitude, widely considered as a weed of fields. The leaves are simple, alternate or sub-opposite, 4.5 to 10 cm/2.5 to 5 cm, ovate or ovate oblong, margin undulate, sparsely strigose along nerves on either side, serulate or undulate with cordate, minutely pilose beneath nerves and veins conspicuous on the lower side.

H. indicum may flower throughout the year; the flowering season is very long and new flowers develop apically within the cyme while mature nutlets are already present at the base of the inflorescence. The flowers are white or violet coloured, regular, sessile, two ranked pentamerous, extra axillary. Sepals-5, 2.5 mm long, bristly with a few long hairs outside, free, green, linear lanceolate and unequal. Numerous branched, more or less densely hirsuit with spreading hairs are found in the stem and the root system is tap root and branched 3-5.

Ethnopharmacology: H. indicum has been used in different traditional and folklore systems of medicine for curing various diseases. An ethnopharma-cological survey revealed that, the traditional healers in Kancheepuram district of Tamil Nadu, India use H. indicum to cure skin diseases, poison bites, stomachache and nervous disorders 6.

In some African countries, another ethnopharma-cological survey reports that H. indicum is believed to be useful in treating malaria, abdominal pain and dermatitis. The highest number of usages (22%) was reported for the treatment of malaria 7. In Jamaica, the decoction of the entire plant is taken orally for treatment of intractable fever, ulcers, venereal diseases and sore throat and used externally in vaginal cavity to induce abortion in pregnant females and administered rectally to treat local sores in the rectum 8, while in Phillipines and Senegal, used orally as diuretic and for the treatment of kidney stone 9, 10.

In Thailand, the dried inflorescence is believed to produce permanent sterilization when taken orally in females. One gram of the dried and powdered inflorescence mixed with milk or water is used for three days beginning with the fourth day of menses to achieve the desired result 13. Other folk remedies include use of decoction of the leaves for treatment of fever 14, insect bites, stings, diarrhoea, skin rashes, menstrual disorder and urticaria 15. The decoction of the leaves is also credited to be useful in curing insect stings (macerated with sugar cane juice), scorpion stings 10 and as abortive in large dose and emmenagouge in small dose 15.

The leaf paste is applied externally to cure rheumatism in Rayal Seema in Andhra Pradesh, India 16 and skin infection in Nicaragua 17. The decoction of both leaf and root together is also used for treating whooping cough in children in Eastern Nicaragua 18.In Amazon, the paste of both leaf and root together is applied externally in scorpion stings, bug bites 19 while the paste is recommended for treating sores and warts in Taiwan 20.

In Malaysia, a paste made from the plant is applied to counteract putrefaction, to treat pyoderma and ringworm infection. In Burma, a decoction of the whole plant is used to treat gonorrhea while in Indonesia, an infusion of the leaves is used to soothe mouth sprue. A decoction of the dried roots is drunk in the Philippines to promote menses, while the seeds are used to treat cholera, malaria, and for wound-healing 21.

Other alkaloids such as putrescine, spermidine, homo spermidine and spermine have been identified in the leaves 31. Apart from alkaloids, several triterpenes and steroids including b-amyrin, lupeol 22, chalinasterol 32, b-sitosterol, stigmasterol and campesterol 32 have been reported from the entire plant. Other compounds reported from the entire plant include rapanone 33 and hexacosan-1-ol 32. Presence of estradiol 34 has been reported in the roots.

Helindicine, a new pyrrolizidine alkaloid together with the known lycopsamine were isolated from the roots of H. indicum. The structures were established by a combination of 1D and 2D NMR methods (COSY, HMQC, HMBC, and NOESY) and HREIMS. This is the first report of a lactone pyrrolizidine alkaloid in the genus Heliotropium. Helindicine and lycopsamine were assayed for antioxidant activity and showed moderate activity 35.

The essential oil of H. indicum, extracted by hydrodistillation was analyzed by Gas chromatography (GC) and gas chromatography–mass spectrometry (GC-MS). Aldehydes (52.8%) occurred in the highest amount represented by phenylacetaldehyde (22.2%), (E)-2-nonenal (8.3%) and (E, Z)-2-nonadienal (6.1%), with a significant quantity of hexahydrofarnesylacetone (8.4%) 36. In another experiment, the volatile oil isolated by hydrodistillation was analysed by a combination of GC–FID and GC–MS. The major constituents of the volatile oil were phytol (49.1%), 1-dodecanol (6.4%) and β-linalool (3.0%) 37. 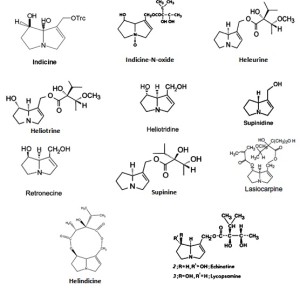 Bioactivity: The volatile oil from the aerial parts isolated by hydrodistillation was studied for antituberculosis activity against Mycobacterium tuberculosis H37Ra in the Alamar blue assay system. The results revealed significant antituberculosis activity with an MIC of 20.8 µg/ml 37. The antifungal activity 38 of the aqueous extract of fresh leaves against Fusarium oxyparum and antibacterial activity 39, 40 of methanol extract against, Klebsiella spp., P. mirabilis, P. aeruginosa, S. aureus, B. subtilis and E. coli has been demonstrated. The methanol extract of the aerial parts of H. Indicum is reported to be active against S. aureus, S. pyogenes,  S. pneumonia,  K. pneumonia, E. coli and Shigella dysentriae respectively 41.

The petroleum ether extract of the entire plant is reported to possess significant antifertility activity when studied in rats 32. In another experiment, the n-hexane and benzene fractions of the ethanol extract of H. indicum were studied for antifertility activity in rats using anti-implantation and abortifacient models. In-vitro sperm motility study was also performed using different concentrations of the extract. The study revealed that H. indicum possesses promising abortifacient activity and moderate effects on implantation and sperm motility 42.

The antitumor activity of different extracts showed significant activity in several experimental tumor systems. The active principle was isolated and found to be N- oxide of the alkaloid, indicine 26, 43. Indicine-N-oxide has reached Phase 1 clinical trials in advanced cancer patients.  In early clinical studies the possibility of using Indicine N-oxide for the treatment of leukemia and tumors was discussed 44. But severe toxic side-effects showed that a therapy with indicine-N-oxide was not justiﬁed 45-47. Most of the alkaloids are hepatoxic and therefore internal use of Heliotropium species is not recommended 48.

The gastroprotective effects of the aqueous extracts of the dried leaves of H. indicum on indomethacin- induced gastric ulcerated mucosa has been demonstrated. The results showed normal morphological appearance of the different components of the mucosa layer indicating the aqueous extract possesses gastroprotective effects 49, 50. The aqueous and ethanol extracts of the roots possess strong uterine stimulant effect when tested in rats 51, 52.

The ethanol (95%) extract of the roots possess weak smooth muscle relaxant activity when tested on guinea pig ileum and rabbit duodenum 52. A studywas designed tofind receptors that possibly mediate the activity of H. indicum on smooth muscles. The effect of various concentrations of agonist drugs and an aqueous extract from the plant as well as the effects of these agonist drugs and the extract in the presence of specific reference antagonist drugs were established on isolated guinea-pig ileum, rabbit jejunum, rat uterus and rat anococcygeus preparations.

The extract caused dose-dependent contractions similar to the acetylcholine, methylcholine, carbamylcholine, nicotine, histamine and oxytocin used on the smooth muscle preparations studied. The contractions were significantly inhibited by atropine and hexamethonium, suggesting muscarinic and nicotinic activity, adrenaline and salbutamol, suggesting adrenoceptor activity and diclofenac sodium, suggesting the inhibition of synthesis and/or effect of products of cyclooxygenase such as prostaglandin. The extract was significantly stable to plasma cholinesterase. The receptor activity of H. indicum explains some of its traditional medicinal uses such as relieving abdominal pain, hypertension and impotence and sexual weakness 53.

The anti-inflammatory activity of different extracts of H. indicum has been reported using egg white 57, carrageenin-induced acute paw edema model and cotton pellet granuloma subacute inflammation models 58. The results showed that the extracts produced significant anti-inflammatory effect in both acute and subacute models of inflammation. The methanol extract of the dried roots of H. indicum was investigated for its possible antinociceptive, cytotoxic and diuretic activities in animal models. The extract produced significant writhing inhibition in acetic acid-induced writhing in mice.

The crude extract produced the most prominent cytotoxic activity against brine shrimp Artemia salina (LC50 = 47.86 μg/ml and LC90 =75.85 μg/ml). Moreover, diuretic activity was proven by the electrolyte loss ratio (Na+/K+ excretion ratio was 1.38 and 1.45 at the doses of 200 and 400 mg/kg respectively) as that of the standard diuretic furosemide (1.37) 59. In another experiment, significant analgesic activity was observed with aqueous and ethanol extracts. However, a 14-day oral administration of 1-2g/kg of the extracts in Sprague-Dawley rats produced pathologic effects on the heart, kidney, liver and lungs. Therefore, although the aqueous and ethanol extracts have analgesic activity, it could have a cumulative toxic effects hence prolonged and continuous use is not advised 60.

Conclusion: H. indicum has it application in several traditional systems of medicine including Ayurveda and Siddha 64, 65. For medicinal uses, H. indicum is exclusively collected from the wild. The plants are generally collected when fully grown. The plant contains a large number of pyrrolizidine alkaloids proved to be potent liver toxins.The toxicity of this plant has not been well studied. Heliotropium alkaloids have been considered as potential agents in chemotherapy and clinical trials have been executed. However, the applications in cancer therapy are limited by the toxic effects, in particular the hepatotoxic effect of the pyrrolizidine alkaloids content. External application to promote wound healing as an anti-infective requires more research.