Categories Menu
Home » A REVIEW ON NATURAL CHALCONES AN UPDATE

ABSTRACT: Plants are a valuable source of secondary metabolites. Many phytochemicals are obtained from the plant sources that are used as valuable medicinal agents. Chalcones are one of the important secondary metabolites obtained from many edible plants like foods, vegetables, tea, spices and natural foodstuffs. Chalcones considered as obligate intermediated in flavonoid biosynthesis but they do not accumulate to an appreciable degree in most plants. Chalcones are a group of plant-derived polyphenolic compounds belonging to the flavonoids family that possess a wide variety of cytoprotective and modulatory functions, which may have therapeutic potential for multiple diseases. The largest number of natural chalcones has been isolated from species of the Leguminosae, Asteraceae and Moraceae families. Chalcone accumulating plants have often been used in traditional medicine and These chalcones and their derivatives have shown important antimicrobial, antifungal, anti-mycobacterial, antimalarial, antiviral, anti-inflammatory, antioxidant, anti-tumor, antileishmanial, anticancer properties. The purpose of this review is to summarize the various naturally occurring chalcone compounds which have been isolated from different plants and to describe the recent efforts of scientists in a pharmacological screening of chalcones, studying importance of chalcones and their biological activities.

INTRODUCTION: Chalcones are a group of phenolic or flavonoid compounds widely distributed in plant kingdom 1. They are both intermediates and end products in flavonoid synthesis, act as defensive compounds, participated in pathogens interactions and contribute to the medicinal value of herbs 2. Naturally occurring chalcones and their synthetic derivatives show a wide spectrum of biological activities 3. For these reasons, chalcones are an object of continuously growing interest amongst scientists 4.

Chalcones are belonged to the largest class of plant secondary metabolites and are considered to be precursors of flavonoids and isoflavonoids 5. They serving in plant defense mechanisms to counteract reactive oxygen species in order to survive and prevent molecular damage and attack by microorganisms, insects and animals 6. Chemically, chalcones or 1,3-diaryl-2-propen-1-one Fig. 1 consist of open chain flavonoids in which two aromatic benzene rings are joined by a three-carbon enone moiety, α, β- unsaturated carbonyl system 7. 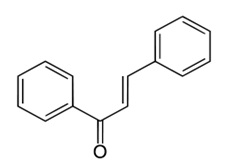 Synthetic Method of Preparing Chalcones: Although chalcones occur naturally, they could be available in larger amounts through an efficient synthesis method. Chalcones can be prepared by any two condensation reactions namely:

Claisen Schmidt Condensation: The most convenient method is the Claisen-Schmidt condensation of equimolar quantities of aryl methyl ketone (acetophenone) with aryl aldehyde (benzaldehyde) in the presence of alcoholic alkali (sodium hydroxide) as a catalyst.

This method of reaction has been found without any solvent as a solid-state reaction. It can be used as an example of green chemistry synthesis in undergraduate education 8.

Aldol Condensation: Acetophenone and benzaldehyde are the starting materials for this reaction. First, acetophenone is treated with a base like KOH which converts it into the more active form, its enolate form.

It will then react with benzaldehyde to form intermediate. The intermediate will then lose water molecule by heat to form chalcone 9. 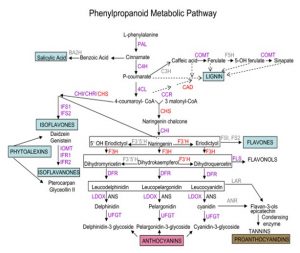 Biosynthesis of Chalcones: Chalcones or benzylideneacetophenone are the important constituents of natural products and have been reported to possess varied biological and pharmacological activity 10. In higher plants, chalcones are synthesized by the enzyme Chalcone synthase from one molecule of p-coumaril-CoA and three molecules of malonyl-CoA. The amino acid L-phenylalanine, which is formed in the shikimic acid pathway, is converted to p-coumaril-CoA through the phenylpropanoid pathway, resulting in the formation of the aromatic B-ring and the 3C bridge of chalcone (C6-C3-). The aromatic A-ring is formed after the condensation of three molecules of malonyl-CoA (-C6).

Once synthesized, chalcone has three main destinations in plant metabolism. It can be used to produce aurones by the Aureusidin synthase; to form glycosyl conjugates, which are yellow flower pigments that accumulate in plants; and in most cases, it can be converted to naringenin by the action of Chalcone isomerase. Chalcone isomerase “type I”, broadly found in higher plants (except leguminous plants) produces the 5-hydroxyflavanone naringenin, which is the biosynthetic precursor of virtually all flavonoids (flavones, isoflavones, flavonols, condensed tannins, and anthocyanins) 11.

The structures were characterized as 7-hydroxy-2'5'-dimethoxy-[6'', 6''-dimethylpyrano(2'', 3'': 4', 3')] chalcone for ponganone-I, and 7-hydroxy-2', 5'-dimethoxy-3, 4-methylenedioxy-[6'', 6''-dimethyl-pyrano (2'',3'',4',3')] chalcone for ponganone II 25. A new diprenylated chalcone stipulin has been characterized from the roots of Dalbergia stipulacea 26. A new dihydroxy chalcone 3, 3' -dihydroxychalcone, 3' -methoxyflavone and beta-sitosterol have been isolated for the first time from the whole plant of Primula macrophylla 27. Spinochalcones A and B, flemistrictin A chalcones were isolated from roots of Tephrosia spinosa 28.

Hybrid flavan-chalcones, desmosflavans A and B, together with three known compounds, cardamonin, pinocembrin and crysin were isolated from leaves of Desmos cochinchinensis 52. Eight chalcone derivatives as the active principles, including licochalcone G, licochalcone A, echinantin, 5-prenylbutein, licochalcone D, isoliquiritigenin, licoagrochalcone A and kanzonol C from the Glycyrrhiza inflata 53. Two new chalcone glycosides 4'-O-(6''-O-galloyl-β-d-glucopyranosyl)- 2',4-dihydroxychalcone and 4'-O-(6''-O-galloyl-β-d-glucopyranosyl)- 2'-hydroxy-4-methoxychalcone together with one known chalcone glycoside 4'-O-β-d-glucopyranosyl- 2'-hydroxy-4-methoxychalcone were isolated from the stems of Entada phaseoloides 54. A new flavanone (mildbone) and a new chalcone (mildbenone) have been obtained from African Erythrina species, Erythrina mildbraedii of Cameroon 55.

Importance of Chalcones: An interesting feature of chalcones pharmacophore is that they serve as starting materials for the synthesis of five and six-membered heterocyclic compounds such as Pyrimidines, Pyrazolines, Flavones, Flavonols, Flavonones, Aurones and Benzoylcoumarones as well as certain compounds like Deoxybenzoins and Hydantoins which are of some therapeutic application 71. Chalcones and their derivatives find application as artificial sweeteners, scintillators, polymerization catalysts, fluorescent whitening agents, organic brightening agents, stabilizers against heat, visible light, ultraviolet light and aging 8. Chalcone containing plants have also been used for a long time in traditional medical practice. The use of herbal medicines continues to expand rapidly across the world. As a result of pharmacological studies, several pure chalcones isolated from different plants have been approved for clinical trials for treatment of cancer, viral and cardiovascular disorders or have been included as ingredients in cosmetic preparations 72, 73. Polyphenols represent one of the most prevalent classes of compounds found in our daily diet. Over the last ten years, increasing attention has been dedicated to chalcones because of their interesting biological activities. Indeed, chalcones constitute an important group of natural compounds that are especially abundant in fruits (e.g., citruses, apples), vegetables (e.g., tomatoes, shallots, bean sprouts, potatoes) and various plants and spices (e.g., licorice), many of which have been used for centuries in traditional herbal medicine. The majority of the content of chalcones in citrus fruits and various plants is mediated through the formation of 4,2′,4′,6′-tetrahydroxychalcone (also known as naringenin chalcone by chalcone synthase. Naringenin chalcone also plays an essential role in the ﬂavonoid biosynthetic pathway and contributes significantly to the total amount of plant flavonoids 74.

Pharmacological Activities of Chalcones: The biological effects of chalcones were found to be dependent on the presence, the number and position of functional groups such as methoxy, glycosides, hydroxyl, halogens in both A and B rings 75. They present a broad spectrum of biological activities such as antifungal 76, antifilarial, larvicidal, anticonvulsant 66, anticancer 77, 78, anti-inflammatory 79, neuroprotective 79, antimalarial 80, antibacterial 81, antilipidemic 82, antihyperglycemic 82,  antiviral 83, antimycobacterial 84, antiprotozoal (antileishmanial and antitrypanosoma) 85, antiangiogenic 86, antiplatelet 87, anti-HIV 88 and Two chalconoids from the desert plant Pulicaria incisa prevented cell death by inhibiting reactive oxygen species (ROS) 89. The chalcones showed selective, reversible and potent MAO-B inhibition compared to MAO-A. Recent studies also showed that heteroaryl-based chalcones are potent MAO-A inhibitors 90.

CONCLUSION: Chalcones are a common scaffold found in many naturally occurring compounds, especially plant-derived natural products. In addition, many chalcone derivatives are prepared due to their easy convenience for synthesis. Chalcone is regarded as a privileged structure of great practical interests because these natural and synthetic chalcone derivatives have shown numerous interesting biological activities with clinical potential against various diseases. Chalcones attracted considerable research interest in multiple disciplines 91.

ACKNOWLEDGEMENT: Financial support provided by the DST-SERB, New Delhi under the Empowerment and Equity opportunities for Excellence in Science is gratefully acknowledged.