ABSTRACT: Recent past has witnessed the promising roles of natural gums as pharmaceutical ingredients. Gums became important excipients in many pharmaceutical preparations owing to their abundance, biodegradability, non-toxicity and comparatively low cost. They have notable applications in pharmaceutical preparation as binders, disintegrants, suspending agents, emulsifiers. The use of these gums as gelling or matrix-forming agents to suit the requirement as excipient in novel drug delivery systems is one of the interesting fields of emerging research. The present article is focused on reviewing some important features of gums, their economic importance uses and pharmaceutical applications.

INTRODUCTION: Natural excipients are preferred over the synthetic as they are inert, safe, non-toxic, biocompatible, biodegradable, low cost, eco-friendly and abundantly available in nature 1, 2, 3. Gums are usually pathological products and are produced when the plant is growing under unfavorable conditions or is injured 4. Thus, they are the abnormal products of plant metabolism. The process is known as “gummosis”. The term gum was probably applied to natural plant exudates that had oozed from tree barks. Gums are translucent and amorphous substances, produced by plants. Gums are soluble or partly soluble in water. They are insoluble in alcohol and most of the organic solvent. They form viscous adhesive solutions with water either by swelling or due to absorption. An aqueous solution of gum is usually levorotary, they

Natural Gums: They are obtained in a natural state such as the tree exudates, extracted from seeds of some legumes or seaweed hydrocolloids. Ex: gum arabica, guar gum, tragacanth.

Modified Gums: They are chemically modified natural gums or derivative of naturally occurring materials such as cellulose or starch. Ex: Carboxy methylcellulose.

Advantages: Natural gums offer several advantages due to their natural abundance. Some of the advantages are as follows.

Natural Gums: A number of natural gums and mucilages have been investigated for a variety of applications.

Some of the recently investigated natural gums are summarized in Table 1.

TABLE 1: SOME REPORTED NATURAL GUMS AND THEIR USES

Classification of Gums: Gums are present in high quantities in certain plants, animals, seaweeds, fungi, and other microbial sources, where they perform several structural and metabolic functions. Various classification systems are available for gums as shown in Fig. 1.

Characterization of Gums: Gums are complex substances. A suitable strategy is required to characterize gums, as summarized in Table 2. Gums and mucilages are polysaccharides, and they contain sugars. Preliminary confirmatory tests are conducted for dried gums and mucilage powders for some important structural components. To determine the purity, tests for alkaloids, glycosides, steroids, carbohydrates, flavonoids, terpenes, amino acids, saponins, oils and fats, and tannins and phenols are carried out. The physicochemical properties such as color, odor, taste, shape, texture, touch, solubility, pH, swelling index, loss on drying, hygroscopic nature, angle of repose, bulk, and true densities, porosity, and surface tension can be estimated. The microbial load and presence of specific pathogens are also determined. Gums and mucilages are highly viscous. 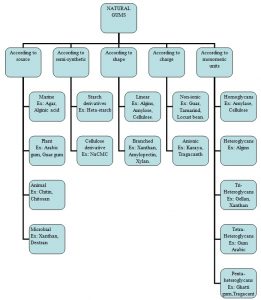 So, the rheological properties of excipients are important criteria for deciding their commercial use. The chemical and structural composition can be determined by using analytical characterization. The acute toxicity of gums and mucilages are determined by the fixed-dose method as per OECD guideline no.425 11.

Economic Importance: The hydrocolloids market is appraised to a value of 8.8 billion USD in 2018 and is expected to increase and to reach a value of 11.4 billion USD by 2023. 57 The demand for hydrocolloids is attributed to the increased utilization in food, pharmaceutical industry. India is one of the largest producers of natural resins, gums, and gum-resins (NRGs) along with China, Indonesia, Russia, and Brazil. Our country is the world leader in production of guar, karaya and psyllium gums as well as lac. The total production of NRG has been increased from 1160314 tons in 2013-14 to 1196308 tons in 2014-15. The production in 2016-17 was reported to be 566230 tons.

The average exported quantity of all-natural resins and gums during 2016-17 was reported to be 329045.55 tons and valued Rs. 289060.92 Lakh 58. Realizing the strategic importance of these natural gums ICAR-Indian Institute of Natural Resins and Gums continuously making efforts to strengthen the sector in the country.

Pharmaceutical Application of Gums: Gums posses a complex, branched polymeric structure because of which they exhibit high cohesive and adhesive properties. Gums have a variety of applications in pharmacy, and some are summarized in Table 3. They are used in medicine for their demulcent for cough suppression, dental, and other adhesive and as bulk laxatives 59, 60. These polymers are useful as tablets binder, disintegrating agent, stabilizing agent protective colloids in suspension, and sustain agent in tablets.

Application of Gums in Tablets Formulation: Natural gums have a wide range of pharmaceutical applications that include their use as binder, disintegration in tablets and used as sustaining agents in tablet. Natural polymer, gums modify the drug release from formulations. Natural gum has good binding property in wet granulation for the manufacturing of tablets. Some reported are Cassia roxbughii seed gum as a binder in paracetamol tablets 94, Magnifier indica gums as binder in paracetamol tablets 95, cashew gum as binder in metronidazole tablets 96.

Gums as Emulsifying and Suspending Agent: Gums are widely used in pharmacy as thickeners, suspending agents and emulsifying agents. Natural gums are hydrophilic colloids that form dispersion with water and increase the viscosity of the continuous phase so that solid particle suspended is sufficient for long time to measure the uniform dose. The use of Ocimum gratissimum, Butea monospermama, Leucaena leucocephala seed gum, and Cordia gharaf gum as suspending agent 97 has been reported.

Gums as Sustaining Materials in Dosage Form: Natural gums are used widely in pharmaceutical dosage forms, their use as biodegradable polymeric materials. The use of several natural gums such as Guar gums, xanthan gums and karaya gum 98 has been explored for the development of sustained-release dosage forms.

Gums as Coating Agent: Plant-based materials can be modified and has been widely used for functional and non-functional purposes, to coat tablets, capsules, granules, powders, and pellets. Grewia Gum as a film coating agent in theophylline tablet formulation 99.

Application of Gums as Gelling Agent: Some thickening agents are gelling agents (gellants), form a gel which dissolve in the liquid phase a colloid mixture that forms a weakly cohesive internal structure there are various types of junction zones in polymer gels like stacked double helix junctions in carrageenans, partly stacked triple helices in gelatin and ‘egg-box’ junction in alginate. Galactomannan interacts synergistically with xanthan gums and carrageenan to form as elastic gel.

Application of Gums as Film Formers: Film-forming systems is a novel approach to conventional topical and transdermal systems. They became a promising method for drug reservoirs in transdermal, buccal drug delivery systems. Various film modifiers like Xanthan gum, carrageenan gum, and locust bean gum was provided with proper texture to film and reduce recrystallization of drug.

Cross-linked Plantago psyllium gum (with methacrylamide) was employed as colon-specific drug delivery system due to its response to pH 102, and they produced hydrogels that respond to ions as well as pH 103. Pectin derived from plant cell walls depends on its degree of esterification responds to ions, pH and enzymes. While cellulose derivatives respond to ions, pH and temperature 101 and have been utilized for colon-specific drug delivery 104.

Natural Polymers for Theranostics: A theranostic is a delivery system fabricated to deliver both medicine and imaging agent(s) in a single dose, bridging the gap between imaging and therapy, thereby facilitating real-time monitoring of therapeutic efficacy of the incorporated drug 111. The multi-functionality of nanoparticles confers the ability to deliver medicine and imaging agents. Metallic nanoparticles have been used as theranostics as well as synthetic and natural polymeric nanoparticles.

Natural polysaccharides due to their excellent biocompatibility, low toxicity, biodegradability and functionalities that the body can identify which, make them excellent materials for theranostics. The nanoparticles were then characterized for in-vitro cellular uptake, ex vivo tissue distribution, in-vivo distribution, and tumor targeting. Other natural polymers such as alginate, dextran and chitosan 111, 112 have been used. Plant polysaccharides should be explored in fabrication of theranostics as they exhibit functionalities recognized by the body as compared to those of the polymers in biological systems. Polysaccharides are the materials for drug targeting and concentration at the site of action. Considering cancer therapy, some polysaccharides have exhibited anti-tumor activity 113. Incorporation of chemotherapeutic into a polysaccharide carrier may enhance cancer therapy.

CONCLUSION: The advent of natural gums as pharmaceutical excipients is attractive because they are economical, abundant, non-toxic, and capable of chemical modifications, potentially bio-degradable and biocompatible. Applicability of gums and mucilages has been well established in the fields of pharmaceuticals. However, there is a need to develop other natural sources as well as with modifying existing natural materials for the formulation of novel drug delivery systems, biotechnological applications, and other delivery systems. Therefore, in the years to come there will be continued interest in natural gums and their modifications aimed at the development of better materials for drug delivery.

ACKNOWLEDGEMENT: The authors are thankful to GITAM Institute of Pharmacy, GITAM Deemed to be University for providing necessary facilities for a review article.