ABSTRACT: To develop a standard conventional solid dosage form like tablets it include the operations involving like milling, mixing, granulation, drying and compression which able to result in different qualities of the final products concerning the loading of the drug, the release of the drug, stability of the drug and pharmaceutical dosage form stability. To overcome some challenges of conventional pharmaceutical unit operations, 3DP is gaining more attention in the pharmaceutical formulation in the future. 3DP can successfully overcome the issues relating to the drug delivery of peptides, potent drugs, water-soluble drugs, and the release of multi-drugs, etc. The ideal opportunity of this technology is the preparation of personalized doses to state individual patient needs. This technology can be seen as the future of solid dosage forms produced on demand, with lower in cost and it also helps in minimizing side effects caused by excessive doses. However, some problems that limit the applications of 3DP in the commercial market, such as selections of binders which are suitable and excipients and the pharmacopeial properties of finishing products. Here, we present an outline and the perspective of 3DP in the development of novel drug delivery systems.

INTRODUCTION: The concept of drug delivery has significantly changed over the years from conventional oral dosage forms to targeted release drug delivery systems. Drug delivery refers to approaches, technologies, systems, and formulations for transporting a compound in the body as needed safely to achieve and show its desired therapeutic effect in the drug delivery area, multifaceted therapeutic systems anticipated to yield modified combinations of drugs release kinetics, drug doses have drawn more attention, especially because of the advantages that personalized pharmaceutical treatments would offer. 1

In its maximum basic setup, 3DP uses computer-aided drafting technology and programming to produce a 3D object by layering material onto a substrate. The material is first ejected from a printer head onto an x-y plane to create the foundation of the object. The printer then moves along the z-axis, and a liquid binder is ejected onto the base of the object to a certain thickness. This process is repeated following the computer-aided drafting instructions until the object is built layer by layer. After treatment to remove the unbound substrate, the object is complete 2, 4. This process is also referred to as additive manufacturing (AM), rapid prototyping (RP), or robust freeform technology (SFF) 5.

Advantages and Limitations of 3DP in Pharmaceutical Drug Delivery: Compared to conventional pharmaceutical product manufacturing process, 3DP deals with a lot of attractive qualities like 1) low-cost production 2) high production rates due to  its fast operating systems 3) ability to customize products, 4) rapid production of prototypes, 5) ability to achieve high drug-loading with much-desired precision and accuracy especially for potent drugs that are applied in small doses 6) reduction of wastage of materials 7) Improves the safety, efficacy, and accessibility of medicines 8) Compliance to wide types of active pharmaceutical ingredients including poorly water-soluble, peptides and proteins, as well as drug with narrow therapeutic windows 6, 7, 8, 9,.

From the many types of 3DP available Stereo Lithographic (SLA) printers offers the unique advantages of being able to fabricate objects by cross-linking resins to form networked polymer matrices. Because water can be entrapped in there matrices, it is possible in principle to fabricate pre-wetted, drug-loaded hydrogels and devices 10. Various techniques for 3D printing, such as fused deposition modeling (FDM), binder deposition, inkjet printing, material jetting, powder bed fusion, photopolymerization, pen-based 3D printing, and molding, have been reported in the literature 11, 12. Fused Deposition Modeling (FDM) 3D printing has been recently attracted increasing research efforts towards the production of personalized solid oral formulations. 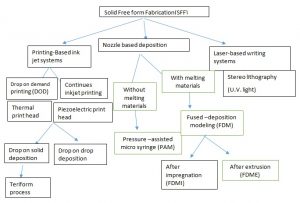 However, commercially available FDM printers are extremely limited with regards to the materials that can be processed to few types of thermoplastic polymers, which often may not be pharmaceutically approved materials nor ideal for optimizing dosage form performance of poorly soluble compounds 13. Such a technique holds enormous potential for the manufacturing of pharmaceutical products and is currently under extensive investigation. Challenges in this field are mainly related to the paucity of adequate filaments composed of pharmaceutical materials, which are needed for feeding the FDM equipment 14. Other than the above limitations of various techniques it also suffers from some other limitations like restrictions of size and raw materials, cost of printers is high, unchecked production of dangerous items and intellectual property issues.

Fabrication of Pharmaceuticals using 3D Printing: Engineer Ricky Wildman from the University of Nottingham in the UK that the impending of 3D printing is about being able to deliver what you want. Ricky is trying to find out the right materials that can be used as inks to form tablets with altering doses of drugs. Steve Tomlin says. This technology could reform the way we look at children‘s medicines, both in terms of what they take and the ability to keep changing the dose as they grow.

Mohamed Albed Alhnan, the pharmaceutical scientist at the University of Central Lancashire in Preston UK, says, the difficulty with this technology is identifying the right materials. He used fused deposition modeling (FDM) based 3D printer on fabricating extended-release tablet of prednisolone loaded (polyvinyl alcohol) (PVA) filaments and on controlling its dose 15. Any polymer used in drug manufacture needs to be biocompatible but also able to withstand the high temperatures used during the printing process, Mohamed says, He has found polymers that can be processed at high temperatures, although still lower than the typical 220-255 °C used in non-pharmaceutical 3D printing applications.

Byung et al. used a piezoelectric inkjet printing system to fabricate paclitaxel-loaded poly (lactic-co-glycolic acid) polymer microparticles with well-defined and controlled shapes. The microparticles showed a biphasic release profile with an initial burst due to diffusion and subsequent sustained release due to degradation of the polymer. The release rate was dependent on the geometry, mainly the surface area, with a descending rate order of honeycomb>grid, ring>circle 19.

Wang J 20 evaluated the suitability of Stereolithography (SLA) to fabricate drug-loaded tablets with modified-release characteristics. The SLA printer creates solid objects by using a laser beam to photopolymerise monomers. They used polyethylene glycol diacrylate (PEGDA) as a monomer and diphenyl (2, 4, 6-trimethyl benzoyl) phosphine oxide was used as a photo-initiator. 4-aminosalicylic acid (4-ASA) and paracetamol (acetaminophen) were selected as a model drug. Tablets were successfully printed, and formulations with different properties were fabricated by adding polyethylene glycol 300 (PEG 300) to the printing solution. The loading of paracetamol and 4-ASA in the printed tablets was 5.69% and 5.40% respectively. In a realistic dynamic dissolution simulation of the gastrointestinal tract, drug release from the tablets was dependent on the composition of the formulations but independent of dissolution pH. In conclusion, SLA 3DP technology allows the manufacture of drug loaded tablets with specific extended-release profiles. In the future, this technology could become a manufacturing technology for the elaboration of oral dosage forms, for industrial production or even for personalized dose.

Aprecia Pharmaceutical 21 based in Langhorne, Pennsylvania, filed its first 3D-printed product for approval to the US Food and Drug Administration (FDA) in October 2014. The company is developing a system that can print large doses of drugs in a formulation that makes it easy to swallow. Aprecia’s product, called Zip Dose, is built up from layer upon layer of powders of the drug bound together by droplets of liquid. 3D printing has been utilized for the fabrication of medical implants and devices, such as stents and catheters and dosage forms such as tablets. Table 1 draws attention to literature pertaining to fabrication of various dosage forms using 3D printing technology.

Perspectives and Challenges: It can be anticipated that if 3DP has been optimized and used with novel technology, it will be the most efficient method. We are anticipating that by using this technology there will be less Patient compliance when large and irregular shapes are orally administered 7 Decrease unpredictability in scaling up and rejection of batches that do not comply with the specification, and consequently to increase effectiveness by decreasing cost 58. Comparing with the common chemical entities which are more sensitive to solvent, temperature, agitation, personalized medicines for which 3DP technologies could find great interest are usually based on the use of biomolecules 59. According to standard limits, it is challenging to obtain impurities free compounds 60.

CONCLUSION: These techniques to developed personalized medicines, avoid incompatibilities between drugs, design multiple-release dosage forms, increase the solubility of poorly soluble drugs by producing amorphous forms, produce very porous material with a rapid onset of action or limit degradation of biological molecules. Indeed, SFF techniques offer a unique alternative for creating drug delivery systems that are very complex in microstructure and shape. It was concluded that 3DP is an advanced drug delivery with built-in flexibility that is well suited for personalized/customized medicines. We believe that with patience and perseverance, 3DP will continue to revolutionize the development of new generations of pharmaceutical formulations that are safe and effective. It is evidenced that through its versatility, the speed of production and precision, the use of three-dimensional printing for the elaboration and distribution of controlled drugs plays a vital role in the current pharmaceutical industry, considering that drugs can be designed according to the patient’s need.

ACKNOWLEDGEMENT: First we thank the almighty. We extend our sincere thanks to our principal and pharmaceutics department staff who supported in completing the review. We would also like to express our gratitude towards our parents for their support.

CONFLICT OF INTEREST: The authors have no conflicts of interest to declare that are directly relevant to the content of this manuscript.