The parenteral administration route is the most effective and common form of delivery for active drug substances with poor bioavailability and the drugs with a narrow therapeutic index. Drug delivery technology that can reduce the total number of injection throughout the drug therapy period will be truly advantageous not only in terms of compliance, but also to improve the quality of the therapy and also may reduce the dosage frequency. Such reduction in frequency of drug dosing is achieved by the use of specific formulation technologies that guarantee the release of the active drug substance in a slow and predictable manner. The development of new injectable drug delivery system has received considerable attention over the past few years. A number of technological advances have been made in the area of parenteral drug delivery leading to the development of sophisticated systems that allow drug targeting and the sustained or controlled release of parenteral medicines.

INTRODUCTION: A number of technological advances have been made in the area of parenteral drug delivery, leading to the development of sophisticated systems that allow drug targeting and the sustained or controlled release of parenteral medicines 1.

Parenteral formulations, particularly intravascular ones, offer a unique opportunity for direct access to the bloodstream and rapid onset of drug action as well as target to specific organ and tissue sites 2.

This review emphasises on the study of advanced novel parenteral drug delivery system with its application in reference. We have made discussion of injectables, implants and infusion devices which are classified as follows: 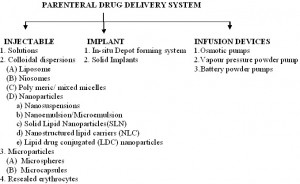 Oil solutions control the release by partitioning the drug out of the oil in the surrounding aqueous biofluids. Vegetable oils like arachis oli, cottonseed oil, etc. are used for such a purpose. The method is applicable only to those drugs which are oil-soluble and have optimum partition coefficient.

The basic challenge of this technique is that during the precipitation procedure the growing of the drug crystals needs to be controlled by addition of surfactant to avoid formation of microparticles. The limitation of this technique lies in the fact that the drug needs to be soluble in at least one solvent and this solvent needs to be miscible with the nonsolvent. Moreover precipitation technique is not applicable to drugs, which are simultaneously poorly soluble in aqueous and nonaqueous media.

Application of Nanosuspension as Parenteral Administration: Nanosuspension can be delivered either intra-articular or intravenous route. But in case of parenteral administration, solute should be remained in solubilized form or particle or globule size below 5 μm to avoid capillary blockage. Some current approaches have come resolve the drawbacks of poorly soluble drug for parenteral delivery. These are salt formation, solubilization using co-solvent, miceller solution, complexation with cyclodextrin and vesicular system (liposome and transferosome). In recent time, vesicular systems like liposome have been accepted for parenteral delivery but they have some limitation in terms of physical instability, high manufacturing cost and difficulties in scale-up. However nanosuspension has still been considered as a useful dosage form which employs better efficacy for parenteral administered drugs. More for example, paclitaxel nanosuspension has been found better responses in treating tumour than taxol. 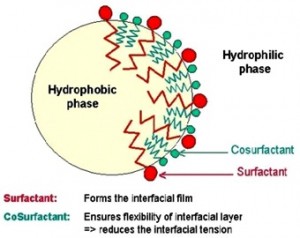 Different types of surfactant are shown in figure 3. 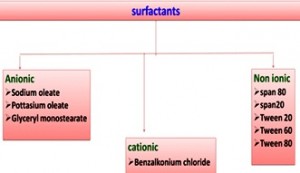 In 1990s, researchers (Mueller and coworkers and Gasco and coworkers) started exploring the potential of nanoparticles-based solid lipids or SLNs in the drug delivery. SLN are colloidal particles composed of a biocompatible/biodegradable lipid matrix that is solid at body temperature and exhibit size range in between 100 and 400 nm. A typical structure of SLN is presented in Figure 4. Various drug molecules have been incorporated in injectable SLN for treatment of different diseases are shown in the table given below; 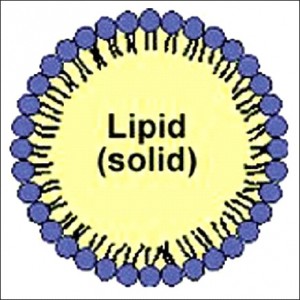 The system is ideally suited for controlled-release of peptide/protein drugs such as LHRH which have short half- lives and otherwise need to be injected once or more, daily, as conventional parenteral formulations. In comparison to peptides, proteins are difficult to formulate because of their higher molecular weight, lower solubility and the need to preserve their conformational structure during manufacture.

In order to overcome uptake of inttrvenously administered microsphere by the RES and promot drug targeting to tumours with good perfusion, magnetic microspheres were developed. They are prepared from albumin and magnetite(Fe2O3) and have a size of 1.0 micron to permit intravascular injection. The system is infused into an artery that perfuses the target site and a magnet is placed over the area to localize it in that region. Magnetic microspheres have specifically been used to target anticancer drug such as doxorubicin to tumours and as diagnostics/contrast agent for magnetic resonances imaging(MRI)

Disadvantages of microspheres for controlled release parenterals include- 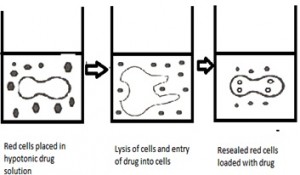 Drug loading can be done by immersing yhe cell in buffered hypotonic solution of drug which causes them to rupture and release haemoglobin and trap the medicament. On restoration of isotonicity and incubation at 37oC, the cells reseal and are ready for use Upon reinjection, the drug loaded erythrocytes serve as slow circulating depots.

Damaged erythrocytes are removed by the liver and spleen. These organs can thus be specifically targeted by drug loaded erythrocytes and is used in the therapy such as enzyme replacement,treating liver tumours, eradication of parasites, etc.

IMPLANT 24: Lafarge first introduced the concept of implantable therapeutic system for long term, continuous drug administration in 1861 with the development of a subcutaneous implantable drug pellet. The technique was used to administered crystalline hormone in form of solids steroids pellets. Implant represent novel approach in the use of solid dosage forms as parentral product. Implants are insert under the skin by cutting and stitching it alter insertion of' the sterile tablet which is cylindrical, rod and ovoid shaped and more than 8 mm in length. The sterile tablets consisting of the highly purified drug, compressed without excipients. If, intended for subcutaneous implantation in the body.

ReGelw also exhibited sustained release kinetics for protein drugs. Release data were published by Gentner et al. Sol-gel transitions occur around 308oC at polymer concentrations of 15 to 23% (w/w) in aqueous solution. Biocompatibility and toxicity do not seem to be problematic. Stability of proteins in the aqueous polymer solutions, the shelf life of the formulations, and in vivo release data for proteins are under investigation.

This method has been developed by ARTIX Laboratories and is designated as the Atrigel technology. Various parameters of different systems are shown in following table.

Solid Implants 3: Implant arecylindrical, monolithic devices of mm or cm dimensions, implanted by a minor surgical incision or injected through a large boreneedle into the s.c or i.m tissue. Subcutaneous tissue is an ideal location because of its easy access to implantation,poor perfusion, slow drug absorption and low reactivity towards foreign materials. The drug in implant may be dissolved, dispersed or embedded ina matrix of polymer or waxes/lipids that control release by dissolution and/or diffusion, bioerosion, biodegradation or an activation process such as osmosis or hydrolysis. 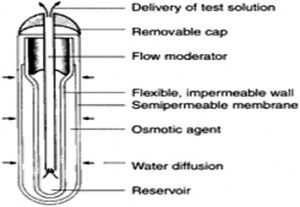 An additional component the flow modulator, comprising of a cap and a tube made of stainless steel is inserted into the body of osmotic pump after filling. After implantation, water from the surrounding tissue fluids is imbibed through the SPM at a controlled rate that dissolves the osmagent creating an osmotic pressure differential across the membrane. The osmotic sleeve thus expands and sinces the outer wall is rigid, it squeezes the inner flexible drug reservoir and the drug solution is expelled ina constant volume per unit time fashion.

The drug delivery continues until the reservoir is completely collapsed. Ionized drugs, macromolecules, steroids and peptides (insulin) can be delivered bysucha device.

The outer titanium alloy cylinder is capped bya SPM at one end and by an exit port at the other end. Whithin the cylinder are an osmotic engine, apiston and the drug reservoir. When the DUROS system is implanted in the human body, water from surrounding tissue enters one end of the cylinder through the SPM, causing the osmotic engine to swell. This osmotic engine displaces a piston, which, in turn,causes the drug formulation tobe released from a port at other end of the system.

After implantation the volatile liquid vaporizes at the body temperature and creates a vapour pressure that compresses the bellows and expels the infusate through a series of flow regulators at a constant rate. Insulin for diabetics and morphine for terminally ill cancer patients have been successfully delivered by such a device.