A REVIEW ON PHYTOCHEMICAL AND PHARMACOLOGICAL POTENTIAL OF CALAMINTHA OFFICINALIS MOENCH.

A REVIEW ON PHYTOCHEMICAL AND PHARMACOLOGICAL POTENTIAL OF CALAMINTHA OFFICINALIS MOENCH.

ABSTRACT:Traditional use of herbal medicines implies substantial historical use and this is certainly true for many products that are available as ‘traditional herbal medicines”. In many developing countries, a large proportion of the population relies on traditional practitioners and their armamentarium of medicinal plants in order to meet health care needs. Today, the pharmacologically active ingredients of many Ayurvedic medicines are being identified and their usefulness in drug therapy being determined and high percentage of plants are used in traditional medicines. In the present article an attempt has been made on calamintha officinalis as a herbal option for different diseases.

INTRODUCTION: Plants and their secondary metabolic constituents have a long history of use in modern medicine and in certain systems of traditional medicine, and are the sources of important drugs such as atropine, codeine, digoxin, morphine, quinine and vincristine 1.

India is sitting on a gold mine of well-recorded and well practiced knowledge of traditional herbal medicine. But, unlike China, India has not been able to capitalize on this herbal wealth by promoting its use in the developed world despite their renewed interest in herbal medicines 2. In India, around 20,000 medicinal plants have been recorded however traditional communities are using only 7,000 - 7,500 plants for curing different diseases 3. The medicinal plants are listed in various indigenous systems such as Siddha, Ayurveda, Amchi, Unani and Allopathy with specific species for various ailments 4.

Sarangdhara mentioned detailed information about various formulations with respect to their methods of preparation as well as basic standards and are documented in Sarangdhara Samhita. The medicinal plants contain several phytochemicals such as Vitamins (A, C, E, and K), Carotenoids, Terpenoids, Flavonoids, Polyphenols, Alkaloids, Tannins, Saponins, Enzymes, and Minerals etc. These phytochemicals possess antioxidant activities, which can be used in the treatment of multiple ailments 5.

Botanical name: Calamintha officinalis (Moench).      (Lamiaceae) is a genus of aromatic herb or shrubs, native to north temperate reasons, a few species extending into the tropical mountains. In India it is found in Himalyan region 6. 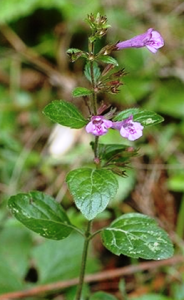 Following species of Calmintha are found to be useful for different diseases:

Description: Calamint belongs to a genus closely related to both the Thymes and to Catnep and Ground Ivy. It is an erect, bushy plant with square stems, rarely more than a foot high, bearing pairs of opposite leaves, which, like the stems, are downy with soft hairs. The flowers bloom in July and August, and are somewhat inconspicuous, drooping gracefully before expansion: the corollas are of a light purple colour.

Constituents: It contains a camphoraceous, volatile, stimulating oil in common with the other mints. This is distilled by water, but its virtues are better extracted by rectified spirit.

Medicinal Actions and Uses: Diaphoretic, expectorant, aromatic. The whole herb has a sweet, aromatic odour and an infusion of the dried leaves, collected about July, when in their best condition and dried in the same way as Catmint tops, makes a pleasant cordial tea, which was formerly much taken for weaknesses of the stomach and flatulent colic. It is useful in hysterical complaints, and a conserve made of the young fresh tops has been used, for this purpose 7.

Ayurveda is a medical system primarily practiced in India that has been known for nearly 5000yrs. It includes diet and herbal remedies, while emphasizing the body, mind and spirit in disease prevention and treatment 8.

Hypoglycaemic effect of Calamintha officinalis Moench. in normal and streptozotocin-induced diabetic rats: The purpose of this study was to investigate the effects of a water extract from the aerial parts of Calamintha officinalis Moench., after either a single dose or daily oral administration for 15 days, on plasma blood glucose concentrations and basal insulin levels in normal and streptozotocin-induced diabetic rats (STZ diabetic rats). The results clearly demonstrated the hypoglycaemic effect of this plant extract in both normal and STZ diabetic rats.

In addition, no changes were observed in basal plasma insulin concentrations after treatment with this plant in normal or STZ diabetic rats, indicating that the underlying mechanism of the plant’s pharmacological action seems to be independent of insulin secretion. We conclude that the aqueous C. officinalis extract exhibits a significant hypoglycaemic effect in normal and STZ diabetic rats without affecting basal plasma insulin concentrations, and supports, therefore, its traditional use by the Moroccan population 9.

Significance and Impact of the Study: The nature of the formulation in which an essential oil is incorporated as preservative could have considerable effect on  its efficacy 10.

Screening of some Greek Aromatic Plants for Antioxidant Activity: In this study, the in vitro antioxidant activity of the ethanol extracts obtained from 21 aromatic plants belonging to the Lamiaceae family was investigated 11.

Chemical Composition and Biological Activities of Calamintha officinalis Moench., Essential Oil: Calamintha officinalis Moench essential oil is used in cooking as an aromatic herb and also to improve the flavor and fragrance of several pharmaceutical products. The essential oil, obtained by hydrodistillation (5mL/kg), was analyzed by gas chromatography–mass spectrometry and gas chromatography–flame ionization detection. Sixty-four components were identified, constituting 99.7% of the total oil. The major component was found to be carvone (38.7%), followed by neo-dihydrocarveol (9.9%), dihydrocarveol acetate (7.6%), dihydrocarveol (6.9%), 1,8 cineole (6.4%), cis-carvyl acetate (6.1%), and pulegone (4.1%).

The essential oil showed antifungal and antimicrobial activity against Gram-positive bacteria. In addition, it presented a very low toxicity both in vivo (50% lethal dose > 100mg/kg) and in-vitro in Artemia salina test (50% lethal concentration >500μL/mL). C. officinalis essential oil, in rodents, produces the typical effects in behavior of a nonselective central nervous system-depressant drug; it potentiates the hypnotic effects of sodium pentobarbital, decreasing the induction time and enhancing the sleeping time. Moreover, it produces a decrease in body temperature and a protection against pentylenetetrazole-induced convulsions 12.

Antidiabetic and Antioxidant Activity of hydroxycinnamic acids from Calamintha officinalis Moench.: This study was undertaken to investigate the antidiabetic and antioxidant activities of crude extracts and pure compounds from the aerial parts of Calamintha officinalis Moench. (Lamiaceae). The aqueous extract showed the promising antidiabetic and antioxidant activities. Based on these findings, the aqueous extract was fractionated on a silica gel column chromatography in a bioassay-guided fractionation affording two known hydroxycinnamic acids showing potent activity rosamarinic acid and caffeic acid.

Both rosamarinic acid and caffeic acid exhibited significant activity, even more than the positive control, glibenclamide. The results indicated that Calamintha officinalis aqueous extract and the isolated compounds are potential natural agents for the control of diabetes 13.

Antibacterial, Antioxidant, Anti-Inflammatory, and other related Pharmacological Activities: This review describes the potential uses of essential oils from temperate aromatic plants. The constituents of the oils are mainly monoterpene and sesquiterpene hydrocarbons with the general formulae (C5H8)n. Oxygenated compounds derived from these hydrocarbons include alcohols, aldehydes, esters, ethers, ketones, phenols and oxides. It is estimated that there are more than 1000 monoterpene and 3000 sesquiterpene structures. The biological activity of the oils can be compared with the activity of synthetically produced pharmacological preparations and should be investigated in the same way. The main plant species and microorganisms investigated are covered in comprehensive tables and references. The brine shrimp bioassay used for the oil toxicity testing is described in detail 14.

Macroscopic, Histologic and Phytochemical Analysis: Calamintha officinalis Moench. (Lamiaceae) is an aromatic plant used since ancient times for its preservative and medicinal properties. The plant, known as ‘Mentuccia’ in Central Italy, is used in cooking as an aromatizant and to impart aroma and flavour to food. The methanol extract of the leaves was subjected to phytochemical and biological investigations. The extract contains polyphenols, catechic tannins and terpenes and shows radical scavenger activity.

By means of HPLC analysis, eriocitrin, eriodyctiol, acacetin, linarin, benzoic acid and some phenolic acids, such as caffeic, chlorogenic, p-coumaric, were determined. The gastroprotective activity of the extract was investigated using ethanol-induced ulcer in rats, with sucralfate as a reference drug. Samples of gastric mucosa, stained by PAS and haematoxylin/ eosin, were observed by light microscopy. The efficacy of the extract was comparable to that of the reference drug. Probably the gastroprotective effect depends on a synergistic action of all the compounds occurring in C. officinalis leaves, even if the antioxidant potential of the leaves plays an important role by removing damaging agents from the gastric mucosa 16.

CONCLUSION: It has been observed that plant Calamintha officinalis contains large amount of essential oil which have many useful pharamcolgical active compound however few are still not explored Pharmacologically. As mentioned in literature that sixty four compound were identified, but pharmacology is yet to be performed for many compound therefore, a lot of work is required to be carried out on Calamentha officinalis.

We are working on essential oil of the plant for heptoprotective activity, so in coming months, we will try to publish a research article in your esteemed journal.

ACKNOWLEDGEMENT: The authors are indebted to Institute of pharmacy Bundelkhand University Jhansi and BIT mesra Ranchi for providing necessary facility like internet surfing, library and other technical support to write a review article.