ABSTRACT: Lantana camara Linn. is considered as a notorious weed and a popular ornamental plant. It is noted from ancient time that plants have been an excellent source of medicine. Since very long time Lantana camara has been reported as one of the most important medicinal plants in the world. Lantana camara is used in traditional medicine system for the treatment of cuts, swellings, ulcers, cataract, bilious fever, itches, eczema, and rheumatism. Various parts of Lantana camara plant are used in the treatment of cold, headache, whooping cough, asthma, chicken pox, bronchitis, eye injuries, and arterial hypertension. L. camara has scientifically studied for various therapeutic activities like antibacterial, antioxidant, antipyretic, insecticidal, antimicrobial, wound healing, etc. Nowadays this plant Lantana camara is worked in several recent advanced techniques like phyto-extraction of heavy metals, phytoremediation of particulate pollution and many others. Various literature has reported the phytoconstituents present in all parts of Lantana camara. In last few decades, scientist and researchers throughout the globe have elaborately examined the chemical composition of the whole plant of L. camara. The plant is spread widely over Uttarakhand, Uttar Pradesh, Himachal Pradesh, and North-Eastern states of India. The present review is an aim to give a complete report of the literature on its phytochemistry and pharmacological activity.

INTRODUCTION: Lantana camara Linn. relating to the family Verbenaceae, familiarized in India as a decorating plant but entirely naturalized and found throughout India 1. Lantana camara has been standing as one of the most fundamental medicinal weeds in the world 2. The word Lantana camara obtains from Latin ‘lento’ which means ‘to bend’ 3.

This species was first represented and acknowledged its binomial name by Linnaeus in 1753 2. The plant Lantana camara, commonly known as wild sage or red sage, is the plant of the genus of Verbenaceae family with 600 variations existing natural, and it is an arboreous plant with different flower colours i.e. red, white, yellow and violet.

It is an evergreen potent smelling shrub, and its leaves are opposite, simple with large petioles, oval blades which are rugged and hairy and have bluntly toothed margins 4. Berries of Lantana camara are round, fleshy, two-seeded bean. In initially seeds of Lantana camara are green colour and turning purple and finally to a blue-black colour. Lantana camara is indigenous plant found in tropical regions. Lantana camara is well-noted by several names in several languages in India viz. Kakke and Natahu (Kanada), Arippu and Unnichedi (Tamil), Aripoov, Poochedi, Konginipoo and Nattachedi (Malayalam), Thirei, Samballei, Chaturangi and Vanacehdi (Sanskrit), Nongballei (Manipuri), Raimuniya (Hindi), Tantani and Ghaneri (Marathi) and Pulikampa (Telegu) 5, 6.

Lantana camara is regularly used as herbal medicine and in some areas as firewood and mulch 7. Especially in India, there has been to a great extent work conducted on the chemical constituents of Lantana camara. The leaf oil is employed as an antiseptic for scars; the roots are used for the treatment of a toothache and the flowers for chest complaints in children 8. Lantana camara leaves extract exhibited anti-proliferative, antimicrobial, fungicidal, insecticidal and nematicidal activities 9 -12. Lantana camara shoots extract exhibited significant antioxidant activity 13.

The berries fruits are useful in fistula, pocks, tumors and rheumatism 14 - 17. The essential oil of Lantana camara exposed a broad spectrum of antibacterial, antimicrobial, and antifungal activities 18 - 20. In Lantana camara, chemical constituents are present as triterpenes like lantadenes A, B, C, and D (Fig. 1- 4) 21, alkaloids, flavonoids 22,  saponins, tannins 23, germacrene A, B and D (Fig. 5) and  chief compounds are valencene and γ- gurjunene 3. 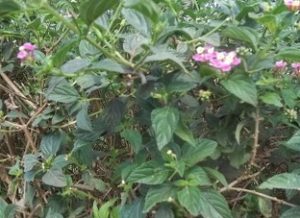 The distribution of Lantana is still expanding with many countries and Islands that are Yap, Galapagos Islands, Palau, Saipan, Tinian, Solomon Islands and Futuna Islands 30. At disordered areas such as roadsides, railway tracks, and canals are also favourable for the species 31. It does not arise to have an upper temperature or rainfall limit 32. Lantana camara can’t come through under dense and intact canopies of taller native forest species, and Lantana camara is susceptible to frosts, low temperature, and saline soils 33. 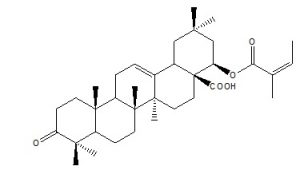 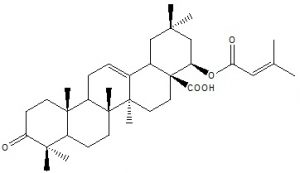 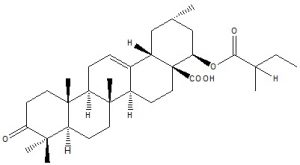 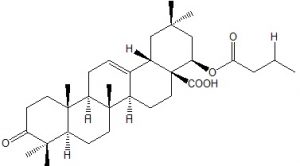 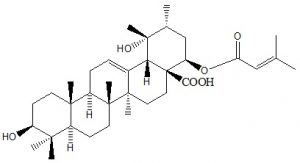 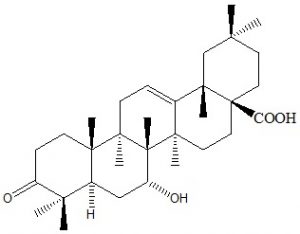 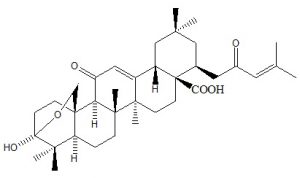 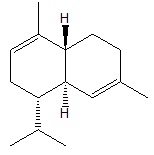 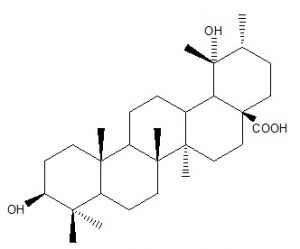 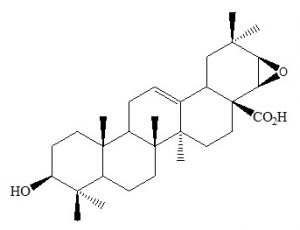 Khan et al., in 2002 presented a GC-MS analysis of Oil collected from leaves and flowers of Lantana camara and recorded that Lantana camara oils also contain α-cadinene (Fig. 12), β and γ-elemene (Fig. 13 - 14), α-copaene and as major constituents 37. It was identified and reputed 1, 8-cineole, Sabinene (Fig. 8), α- humulene, β-caryophyllene, 8-hydroxybicyelogermaerene, and sesquiterpenoids humulene epoxide III in leaf and flower oils of Lantana camara 38, 39, and 40. Two novel triterpenoids were also isolated from the roots of Lantana camara. Their structures were determined as 3β, 19α-dihydroxyursan-28-oic acid (Fig. 15), and 21, 22β-epoxy-3β-hydroxyolean-12-en-28-oic acid (Fig. 16) 41. 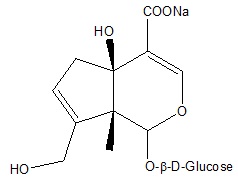 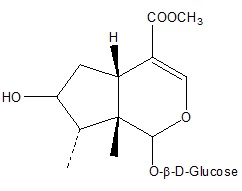 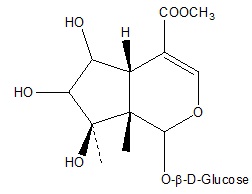 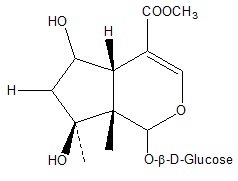 The white, pink or red flowering taxa yield considerable quantities of the the veside (Fig. 17) present as a sodium salt 42, 43. The leaves included 1.3 - 3.6 % and stem 4.3 - 5.8 % in the spring and summer, decreasing significantly to 0.6 % for both leaves and stems in autumn. Also from the roots geniposide, the biosynthetic precursor of the veside has been isolated together with 8-epiloganin (Fig. 18), lamiridoside (Fig. 19) and shanzhside methyl ester (Fig. 20) 44, 45. 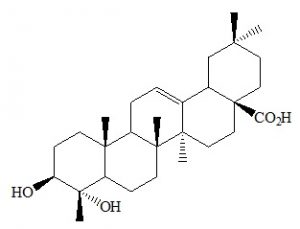 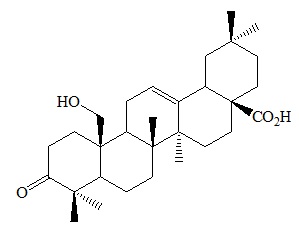 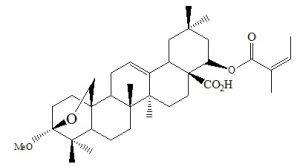 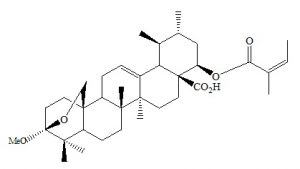 CONCLUSION: Lantana camera is an important medicinal plant with several medicinal uses in folk and traditional therapeutic system.  From this review, it is quite evident that L. camara contains some phytoconstituents which reveal its applications for different therapeutic purposes. The Plant or its specific parts can be used for the treatment of various disorders in the human being such as antiulcer, analgesic, anti-inflammatory, antimicrobial, anthelmintic, anti-cancer antifungal, antibacterial and wound healing. Lantana oil is sometimes applied for the treatment of skin itches, as an antiseptic for wound and externally for leprosy and scabies. Yet, so much work is required with the Lanata camara to investigate the mechanism of actions with other therapeutic activities.  In future, there is enormous scope in research for this plant. Ethnomedical and scientific reports about the medicinal properties of L. camara represent it as a valuable plant and establishing it as a candidate for the future drug development. Further examination of L. camara plants (active compounds) can be carried out by way of making use of various investigative methods such as HPLC, HPTLC, FTIR, NMR and UV spectrophoto -meter study.

ACKNOWLEDGEMENT: The authors of this paper are very thankful to the managing director of Goel Institute of Pharmacy and Sciences.