Khushboo Parmar* and Meenakshi B. Patel

ABSTRACT: Drug delivery via the oral mucous membrane is considered to be a promising alternative to the oral route. Sublingual dosage form is to be placed under the tongue and produce immediate systemic effect of enabling the drug absorbed directly through the mucosal lining of the mouth beneath the tongue which is very rich to vascular blood supply. Sublingual spray is useful when rapid onset of action is desired with better patient compliance than orally ingested tablets. In terms of permeability, the sublingual area is more permeable than the vocal area, and hence also than the palatal area. The sublingual spray is to be sprayed for faster onset of activity. The absorption of drugs through sublingual route is 3-10 times larger than that presented by oral route hence can be employed for emergency weather. As per formulation aspects, dose uniformity of sublingual film is a technical challenge. On the other hand, ease of administration is more in the case of spray as compared to film. The primary advantages of sublingual spray include elimination of first pass effect, rapid drug absorption, high efficacy, large surface area and many more. In this delivery scheme, drug directly goes to the arterial circulation by sublingual vein and capillaries and then into the jugular vein and then to the Superior vena cava.

INTRODUCTION: The oral mucosa is highly vascularised, drugs that are ingested through the oral mucosa directly reach to the systemic circulation, bypassing the GI tract and first-pass metabolism in the liver. This effect in rapid onset of action via more comfortable and convenient delivery route than the intravenous route for selected drugs.

Sublingual sprays are to be sprayed under the tongue for faster effect of enabling the drug absorbed directly through the mucosal lining beneath the tongue 1, 2.

Mechanism of Sublingual Absorption: The absorption potential of the oral mucosa is affected by the lipid solubility and hence the permeability of the solution, ionization and molecular weight of substances. When carrier pH is low (more acidic), the absorption of some drugs through oral mucosa increases and decrease with a higher pH (more alkaline). The cells of the oral epithelium and epidermis are also capable of absorbing by endocytosis (the uptake of particles by a cell as if by hollowly wrapping itself around it. These engulfed particles are usually too large to diffuse through its wall). It is unlikely that this mechanism is used across the entire stratified epithelium.

It is also unlikely that active transport processes operate within the oral mucosa. However, it is believed that acidic stimulation of the salivary glands, with the accompanying vasodilation, facilitates the absorption and uptake into the circulatory system. The mouth is lined with a mucous membrane which is covered with squamous epithelium and contains mucous glands. The sublingual mucosal tissue is similar to that of the buccal mucosa. The salivary glands consist of lobules of cells which secrete saliva through the salivary ducts into the mouth. The three pairs of salivary glands are the parotid, the sub-mandibular and the sublingual which lies on the floor of the mouth. The more acidic the taste, the greater the stimulation of salivary output.

The sublingual artery travels forward to the sublingual gland, it supplies the gland and branches to the neighbouring muscles and to the mucous membranes of the mouth, tongue and gums. Two symmetrical branches travel behind the jawbone under the tongue to meet and join at its tip. Another branch meets and anastomoses with the sub mental branches of the facial artery. The sublingual artery stems from the lingual artery - the body's main blood supply to the tongue and the floor of the mouth - which arises from the external carotid artery. The proximity with the internal carotid artery allows fast access to its route supplying the greater part of the cerebral hemisphere 2, 4, 5.

Sublingual Glands: Sublingual gland is called as salivary glands, which are present on the floor of the mouth, beneath the tongue. Drugs having infrequent dosing regimen and short delivery could be delivered successfully through sublingual route because of the rich blood supply and high permeability. The sublingual route produces a rapid onset of action. Sublingual glands are also known for their lubricating and binding functions, sublingual gland secretion makes the food slippery and easily swallowable. Saliva secretion plays a major role in shaping the principle physiological environment of the oral cavity in terms of pH, composition and fluid volume.

It is a protective fluid in all tissues of the oral cavity, hydrates oral mucosal dosage forms, continuous mineralization / demineralization of the tooth enamel. The saliva secretion has been promoted by 3 major salivary glands, which are sublingual, parotid and sub- maxillary gland. Saliva regulates oral microbial flora by maintaining the oral enzyme activity and pH. Sublingual glands are known for their viscous saliva with limited enzymatic activity, whereas sub-maxillary gland and parotid produces a watery secretion. For lubricating the oral cavity saliva is helpful; it prevents demineralization of the teeth and facilitates swallowing. Approximately 0.5-2.0L of saliva secreted by salivary gland. However, around 1.1ml volume of saliva, which is available constantly provide relatively low fluid volume, which available for drug release from delivery systems compared to GI tract. If we compare the GI fluid and saliva, saliva is less viscous. The flow rate of saliva, which in turn depends on 3 factors; time of day, the degree of stimulation and the type of stimulus. The mechanism of absorption any sublingual dosage form through mucosa is shown in below Fig. 1. 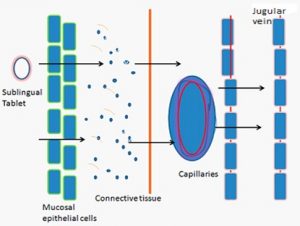 Aerosol: The term aerosol is used to denote various systems ranging from those of colloidal nature to systems consisting of pressurize packages. The aerosol has been defined as a colloidal system consisting of very finely subdivided liquid or solid particles dispersed in and surrounded by a gas. Metered valves are important for medicinal aerosols. These valves make it possible to dispense quantities of aerosol ranging from 25 to 100μl per actuation 10.

The following Table 1 shows the different types of Aerosol systems can be possible 10.

In aerosol system, there are many types of Hydrocarbons used as propellant. Some of them are listed in below Table 2 10.

The following Fig. 2 shows the cross-section of an aerosol container. 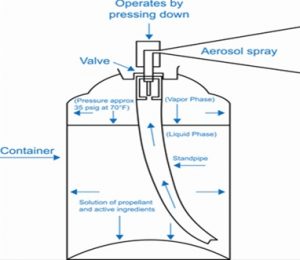 Propellants: The propellant provides the force that kicks out the product concentrate from the container and additionally is responsible for the rescue of the formulation in the proper course (i.e., spray, foam, and semisolid). When the propellant is a liquefied gas or a mixture of liquefied gases, it can likewise function as the solvent or vehicle for the product concentrate.

Spray Patterns: Deliver the spray through the aerosol container onto a Whatmann filter paper (use color for better vision - Sudan red or brilliant blue) and observed the patterns formed and calculate the diameter and Ovality ratio. The Ovality ratio is calculated using formula:

Where, Dmax and Dmin are the maximum and minimum diameters of the spray pattern respectively.

pH: pH meter is calibrated according to the manufacturer’s directions using two buffers for calibration. The tip of the probe is dipped after rinsing with water into samples. The meter is allowed to equilibrate. The pH is noted on attaining equilibrium state.

Leak Test: Leak test was done for checking the crimping of valve. Crimping must be available to prevent defective container. This was accomplished by measuring the crimps dimensions and ensuring that they meet the specifications. Leak testing of valve closure was done by passing the filled containers through water bath.

Vapor Pressure: The pressure is measured simply with a pressure gauge. It can be accessed through the role of a water bath, test gauges, and limited equipment.

Flame Projection: This test indicates the effect of an aerosol formulation on the extension at an open flame. The project is sprayed for about 4 sec into a flame. Depending on the nature of the formulation, the flame is extended, the exact length being measured with a ruler.

Aerosol Valve Discharge Rate: This is determined by taking an aerosol product of known weight and discharging the contents for a given period of time using standard apparatus. By reweighing the container after the time limit has expired, the discharge rate, which can then be expressed as grams per second.

Drug Content: One ml of spray solution is taken and its absorbance is determined using UV spectrophotometer after adequate dilution. Concentration is determined from the standard plot and the drug content is calculated as a % of the theoretical value.

Drug Content per Spray: The content per spray is determined by firing two sprays in a beaker containing diffusion media. This solution is shaken for a few minutes and drug content is analyzed by analytical technique.

Spray Angle: The method of impingement of spray on a bit of paper is employed for the work. Sudan red (10mg) is dissolved in formulation to facilitate visualization. The sprays are actuated in horizontal direction onto a whole paper mounted at a specific distance from the nozzle. The radius of the circle, formed on the paper, is recorded in triplicate from different directions. Spray angle (θ) is calculated by equation.

Where L= Distance of paper from the nozzle, R=Average radius of the circle.

Spray Profiling (Delivered Dose Uniformity): Reproducibility of dosage is determined using this test as per USP. The median quantity of active ingredient delivered through the actuator per spray is assayed. The unity of content is validated by performing the test at the three different points, i.e. starting, intermediate and ending point approximately.

Ex-vivo Drug Diffusion Studies: The Ex-vivo drug diffusion study of optimized formulation is performed using Franz diffusion. The study is performed on sublingual goat mucosa in buffer suitable to membrane between 6 and 7. At the particular time interval, the aliquot is withdrawn and analyze in UV spectrophotometer. The drug diffusion study is carried out for a certain period of time.

Flux and Apparent Permeability Determination: Flux and apparent permeability can be calculated using the following formulae.

Where, ΔQt / S is the cumulative drug permeation per unit of mucosal surface area (μg/ cm2) t is time expressed in hour.

Where, Jss is the flux and Cd is the concentrate of drug in donor compartment.

ACKNOWLEDGEMENT: The authors thankful with our deepest core of heart to Dr. Naazneen Surti for her valuable guidance and all the others who directly and indirectly gave their support.