Categories Menu
Home » A REVIEW ON THE SYNTHESIS AND BIOLOGICAL ACTIVITIES OF PIPERIDIN-4-ONES K. P. Greeshma * and S. Muthulingam

A REVIEW ON THE SYNTHESIS AND BIOLOGICAL ACTIVITIES OF PIPERIDIN-4-ONES K. P. Greeshma * and S. Muthulingam

ABSTRACT: Piperidine is a key structural motif in various alkaloids and a variety of compounds studied in medicinal chemistry. Though many methods have been developed for their construction, there is still need for noval approaches. Among the wide variety of heterocyclic compounds; piperidin-4-ones exhibit various biological activities. Synthesis and biological applications of piperidin-4-ones derivatives are outlined in this paper.

Synthesis of piperidine-4-ones: Substituted 4-piperidones were synthesized by Mannich condensation reaction between substituted aromatic aldehydes, ethylmethylketone and ammonium acetate in ethanol medium. The formation of β- amino carbonyl compounds (Mannich bases) from the reaction of an active methylene compound with

formaldehyde and an amine was first recognized by Mannich 7. Baliah and his coworker’s 8-13 developed an elegant method of synthesis of 2, 6-diphenylpiperidine-4-ones based on the earlier work of Petrenko-Kritschenko et al., 14-17. The earlier reaction involved the condensation of an ester of acetone dicarboxylic acid with an aromatic aldehyde and ammonia or a primary amine, leading to the formation of 2,6-diaryl-4oxopiperidine-3,5-di-carboxylate or their N-substituted derivatives (Scheme 1)

The reaction was later extended to aliphatic aldehydes and several amines by Mannich et al.,18-21. The importance of the further work by Baliah et al lies not only in the simplicity of their procedure but also in the use of acetone and other aliphatic ketones in the place of esters of acetonedicarboxylic acid.

The yields were also very high, with practically no side reactions of any consequences 8. A large number of piperidine-4-ones (Scheme 2) have thus been synthesized by   employing various aldehydes and ammonium acetate or amines with aliphatic ketones containing α-hydrogen atoms on both sides of the carbonyl group 22-27.

Only aromatic aldehydes undergo this modified reaction.3-alkyl-pipeidin-4-ones (Scheme 3) have been obtained by employing alkyl methyl ketones with varying chain length 4. The cyclocondensation of benzyl methyl ketone with benzaldehyde and methylamine gave 2, 3, 6-triphenylpiperidine-4-one (Scheme 3). 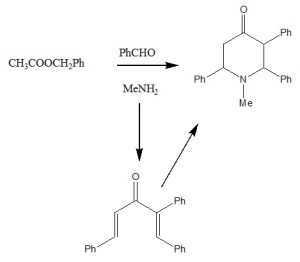 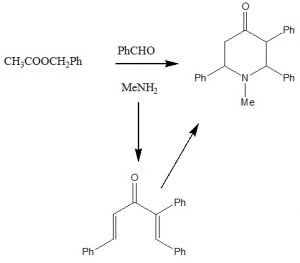 3, 5 –Disubstitued piperidine-4-ones (Scheme 4) were formed when both symmetric and unsymmetrical aliphatic ketones were employed 8, 28, 29.

When ammonia passed into a mixture of benzaldehyde and diethyl ketone containing a little sulphur, a vigorous exothermic reaction occurred leading to the formation of 2, 6-diphenyl-3, 5-dimethylpiperidine-4-one (Scheme 5) in good yield 30. 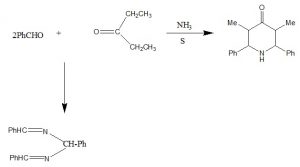 A number of piperidin 4-ones have been obtained from acetonedicarboxylic acid and its esters 36-38 (Scheme 8). The 2, 6 dimethylpiperidine -4-ones obtained from the ester was subsequently converted to keto the N-methyl and N-ethyl derivatives by treatement with methyl and ethyl p-toluene sulfonates38

Though salicylaldehyde and substituted salicyl-aldehydes were reported to react with ketones and ammonia to form piperidine-4-ones 37, 38, 39. Baliah et al., have established 40 with IR, NMR and Mass spectral data that the products are substituted benzopyrans and not piperidine-4-ones.

Stereoselective synthesis of piperidine-4-ones: Reviews updating progress in the stereo selective synthesis of substituted piperidines have appeared recently 41. 2,3 –dihydro-4-pyridones were utilized in the synthesis of numerous alkaloids due to the variety of stereo controlled functionalizations  that were possible 42. 2-substitued –N-acyl-2,3dihydro-4-pyridones were prepared in an enantiomerically pure state by the stereoselctive addition of organomettailc reagents and metallenolates to chiral 1acylpyridinium salts 43.

Intra molecular Processes: The intramolecular Mannich reaction is a powerful tool for the rapid, efficient, highly stereo selective assembly of polysubstitued piperidones. Sulfinyl amines served as asymmetric precursors to δ-amino-β ketoesters44. Treatement with excess trifluroacetic acid removed the sulfinyl group and the released chiral amine salt was then reacted with an aldehyde or ketone giving polysubstitued piperidone. The Major isomer shown to have the C-2 and C-6 substituents in a cis –orientation with the C-2 and C-3 substituents trans. For aldehydes, nearly exclusive formation of the 2,6-cis-disubstitued piperidone was consistent with transition state. Decarboxylation was effected with 48% HBr in methanol. Some erosion of chirality was noted and was attributed to a retro-Mannich reaction. Disubstitued -4-piperidones serve as an important buiding block for piperidine alkaloid synthesis.

Piperidone derivatives are found to act as potentional inhibitors of human placenta aromatase in vitro 48. 3,5 –Bis (arylidene) piperidin- 4-ones behave as cytotoxic and anti cancer agents 49, 50. 2, 2, 6, 6-Tetra methyl piperidin -4-one hydrochloride has been used as spin trap in several EPR studies 51, 52. 2-Arylpiperidin- 4-ones used as a key intermediate for the synthesis of tachykinin antagonist and indolizidine alkaloids 53. Earlier reports have been indicated that biological activity is significant in substitution at 2nd or 6th position of piperdin-4-one.The arylthiopiperidin-4-ones exhibit significant antibacterial activity against Staphylococcus aureus, Vibrio cholerae, Salmonella typhi, and Escherichia coli and antifungal activity against Candida albicans and Aspergillus niger 54.

CONCLUSION: As shown in the present review, a wide variety of synthetic strategies are being used for the preparation of pharmaceutically active piperidones with a range of potential applications. Due to the demand for improved selectivity and reduction of side effect of drugs in pharmaceutical research are to be designed even in the future.

ACKNOWLEDGEMENT: The authors are thankful to the Management, Secretary, Principal and Head of Science Department of SNR sons college, Coimbatore for the facilities provided and moral support.