In addition to this, Pyrimidines ring is also found in vitamin B1, barbituric acid (2, 4, 6-trihydroxy pyrimidine ) and its several derivatives e.g. Veranal) which are used as hypnotics.2

Numerous reports have appeared in the literature that highlights chemistry and uses of Pyrimidines.

Preparation of Pyrimidines: Synthetic strategies’ of Pyrimidines have involved four main routes based on the condensation of two fragments as illustrated by VI-IX;

Of these strategies that illustrated by VI i.e. the condensation of three carbon unit with an N-C-N fragment appears to most widely use this approaches has been called the common synthesis because of its general applicability to the synthesis of a whole range of Pyrimidine derivative. The great versatility in this synthesis rests with the fact that one or both of the group of three carbon atom fragments may be present as an aldehydes, Ketone, ester or nitrile group, β- Dialdehyde, β-ketoaldehydes, β-keto esters, malonic ester, β-aldehydo or β-keto nitrile and much other combination of these groups or their masked derivatives may be used. The nitrogen containing fragment may be an amidine, urea, thiourea or guanidine and acetyl acetone   serves as an excellent illustrative example in that, it readily under goes reaction with formamidine3, Guaidine4, urea5or thiourea6 to produce 4, 6 dimethyl pyrimidines. 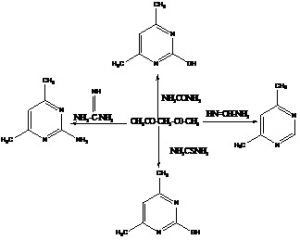 The formamide active methylene synthesis is illustrated by the condensation of acetophenone   with two molecules of formamide in presence of zinc chloride at high temperature to give pyrimidine intermediate.7

The synthesis may be used more effectively by combining the molecules of formamide as trisformamidomethane, which may then furnish N- formyl formamidine, thus acetone and this reagent with toluene sulphonic acid as catalyses yield 4-methyl pyrimidines.7

Ethyl β- aminocrotonate undergoes an extremely facile reaction with phenylisocyanate or methyl isocyanate to form an intermediate ureido derivative which undergo cyclization as treatment with base.8

The condensation of maloenonitrile with amidines such as formamide or benzamidine result in the formation of 4-amino- 5-cyano pyrimidines.9 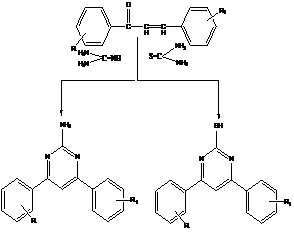 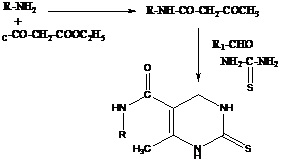 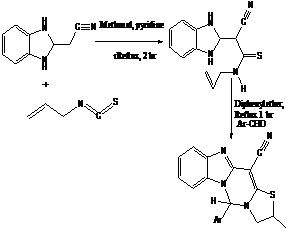 The 2- arylamino- 3- aryl- 5- methyl 6-substituted thieno [2, 3- d] pyrimidines - 4- (3H)- ones synthesized by the condensation of equimolar quantities of the thiophene- o- amino ester with disubstituted aryl thiourea in DMF at reflux temperature in presence of catalytic amount of anhydrous K2CO3.14

The pyrimidines synthesis from benzofuran is very specialized leading only to 5- (o- hydroxyphenyl) pyrimidines one example from a great many is the treatment of 3- acetyl- 2- ethyl- 6- nitro benzofuran with guanidine, acetamidine, thiourea or urea to give in a good yield 4-ethyl- 5- (2΄- hydroxy- 4΄- nitrophenyl)- 6- methyl pyrimidines- 2- amine (R=NH2) the methyl analogue (R=Me) and the corresponding pyrimidines- 2 (1H) thione and pyrimidinones respectively.15

Hydantoins i.e. imidazole 2, 4 diones sometime arise in reactions designed to make pyrimidines. However they can usually be converted into the desired pyrimidines, often under hydrolytic conditions for example, diethyl oxaloacetate and urea under the usual conditions do not give the expected uracil carboxylic acid but the hydantoin however; this may be converted, on vigorous alkaline treatment, first in to the acyclic intermediate and thence into orotic acid.

The 3, 4 dimethyl isooxazole-5-amine is easily acylated to it’s formyl derivative which on catalytic hydrogenation, undergoes ring cleavage and recyclization to yield 5, 6-dimethyl-pyrimidine-4(3H)-one, other acyl derivatives give   analogous 2-substituted pyrimidines.15

Treatment of the oxazole with ammonia converts it in to 5- hydroxy- 4, 6- dimethyl pyrimidines.15

The 4- oxopyrazolo [3, 4- d] pyrimidines- 6- thione synthesized from 1, 3- diaryl- 5-ethoxy methylene- 2- thiobarbituric acid in the presence of hydrazine hydrate in ethanol/acetic acid for 8 hours.18

U.V. spectra of pyrimidines: The U.V. spectrum of pyrimidines will depend on the state of the nucleus fully aromatic, partly reduced or fully reduced) on the position, number nature of any chromophoric substituent attached to it and on the ionic species present in the solution being measured. The U.V. absorption of pyrimidines occurs in two bands centered at 243 and 298 nm in cyclohexane. The second band is ascribed to the electronic transition from a nitrogen lone pair non bonding orbital to an empty π-orbital, in short an n to π * transition on account of the hypsochromic shift observed as changing solvent from cyclohexane to water .the lone pair become engaged in hydrogen bonding in water so that the absorbed radiation must be of higher energy (i.e. of lower wavelength) to provide for breaking the hydrogen bonds as well as bringing about the electronic transition. The more intense band at 243 nm is ascribed to a transition from the occupied π orbital of the ring having the highest energy to empty π orbital of lowest energy a π  →  π * transition akin to that which accounts for the 250 nm band of benzene, such bands are unaffected by solvent changes. In general electron releasing substituent cause a bathochromic shift of the n→ π* band while electron withdrawing substituent do the reverse.19

I.R. Spectra of pyrimidines: The I. R. spectra are essentially due to vibrational transition, many substitutes with single bands or isolated double bands give rise to characteristic absorption bands with in a limited frequency.

Range their spectra afforded reference data for identification of pyrimidines, for the identification of certain attached groups and as an aid in studying quantitatively the tautomerism of pyrimidines, pyrimdinethiones and pyrimidines in the solid state or in non protic solvents. Naturally pyrimidin-2-one give strong absorption bands for C=O and N-H band stretching vibration more ever, it is well established that six membered hetro- aromatic ‘hydroxy’ compounds with oxygen in to a ring nitrogen give N-H stretching bands in the range 3360-3420 cm-1 while those with oxygen γ to a ring nitrogen have seen bands in the range 3415-3445 cm-1. pyrimidin-2(and 4)-amine shows two 3500cm-1 representing the symmetric and anti- symmetric vibrations imines absorb at distinctly lover frequencies (3300 cm-1) .

Mogilaian et al20 studied the I. R. spectra of 2- (3- phenyl- 4- formyl pyrazol- 1-yl)- 3- (4- methyoxypheyl)- 1, 8 napthopyrimidine the structure of these compounds were confirmed as the basis of spectral studies the IR spectral of these compound exhibited absorption bands at 1687 and 1608 due to C=O and C=N stretching frequencies.

Nuclear Magnetic resonance spectroscopy: The first proton NMR spectrum of pyrimidine appeared in 1960 and the data were confirmed subsequently. The relative deshielding of forer proton is H-2> h-4=H-5 as might be expected [S (CDCl3)] 9.26 (H- 2), 8.78 (H- 4/6), 7.46 (H- 5)] the spectrum show little change from neat liquid to dilute carbon tetrachloride solution. The three mono-c-methylpyrimidines do show long range coupling between the methyl protons and ortho or para ring protons. For example, 2-methyl pyrimidine has 0.6 Hz and 4-methylpyrimidine has 0.4 Hz (both in CDCl3). 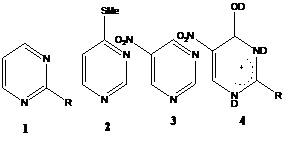 Mass spectra of pyrimidines: The mass spectra of pyrimidines and quninazolines are generally simple. The dominant fragmentation mode of pyrimidines is loss of HCN twice to give ionized acetylene…. 26, as base peak, whether C- 2 or C- 4 is involved in the initial loss of HCN appears to be unknown. Pyrimidines-2-amine also fragments by sequential loss of two molecule of HCN but the product from first loss appears to be the pyrazole radical cation (I) or possibly an imidazole, both of which are known to fragment according to the subsequent pattern for pyrimidine-2-amine behave similarly but pyrimidine-4-amino and it’s derivative fallow a greatly modified and quite complicated pattern both uracil(II, R=H) and thymine (II,R=CH3) undergo on retro-Diels-Alder reaction by losing  HCNO to give fragment (III)(R=H or Me). The subsequent fragmentation is logical enough. Cytosine fragments by at least three pathway, of which are involve initial loss of CO. but barbituric acid proceeds by a logical loss of 2XHNCO in main.25

Antimicrobial activity: Saundane et.al.26 synthesised 2- (2', 5' substituted indolideneamino- 3'- yl) - 4, 6- diaryl pyrimidines (I) and 2 [2', 5'-substitutedindole- 3'- yl) (phenyl azo) methylene imino]- 4, 6- Diaryl pyrimidine(II) with a view to screening then for their antimicrobial activity. the compound were screened for their activity at concentration 1000 µg/ml in DMF against the gram negative Bacteria E. Coli and Gram-positive bacteria S. Aureous by cup plate method and show antifungal activity against A. niger and A. flavus. 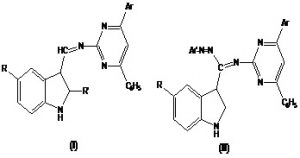 Padamshali et.al.27 prepared Naptho [2, 1-b] furo [3, 2- a] pyrimidine which were useful in the preparation of pharmacologically active compound like anti-inflammatory, anti- anthelmintic, antimicrobial agents. 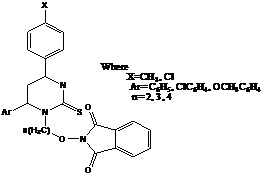 Mishra et.al.30 synthesized various derivatives of pyrimidines. The fungicidal activities of the compound were evaluated against P. infestans and C. falcatum by the usual agar plate technique at 1000, 100 and 10 ppm concentration. 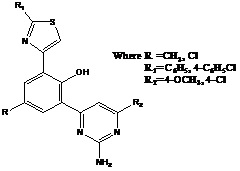 Naptho [2, 1- b] furo [3, 2- d] pyrimidine were prepared by Vaidya et.al.34 the antimicrobial activity of the selected synthesized compounds was determined by cup plate method. The in-vitro antimicrobial activity was carried against 24 hr cell culture of two bacteria and two fungi. The bacterial strains used were S. Aureus and P. Aerugenosa. The fungi used were A. Niger and C. Albicans.

Anti-inflammatory Activity: Vega et.al39 synthesized 3- substituted derivatives of 4-phenyl- 2- thioxobenzo [4' 5] thieno [2, 3-d] pyrimidine and evaluated for their anti-inflammatory activity against carrageen induced edema in rates. They were compared with these obtained for acetyl salicylic acid, piroxicam and ibuprofen which were chosen as reference standard.

Naphtho [2, 1- b] furo [3, 2- d] pyrimidine was reported by Padama shale40 et al carrageen induced rat paw edema method was employed for evaluating the anti -inflammatory activity. The compounds were given at a dose of 80 mg/kg body weight in albino rats weighing between 150 and 200 g. The edema was produced by injecting carrageenan solution at the left hind paw.

Organic compounds and their complex with  various ligand have found many application in biomedicine Al Allaf et.al.43 describe the preparation of R2SnCl2 complex of some 4H-pyrido[1,2-a] pyrimidin-4-one derivatives as donating ligand having multiple doner sites and examine the cytotoxic activity of some of these complex against fine tumor cell lines. 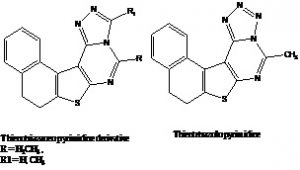 Pirisino et al47 have studied 2-phenyl pyrazolo-4-ethyl- 4, 7- dihydro [1, 5- a] pyrimidine- 7- one for it’s analgesic, antipyretic and anti-inflammatory activities the anti-inflammatory properties of synthesized compound were evaluated by carrageen an induced paw edema and cotton pellets induced granuloma method and found to posses the activity similar to indomethacin, phenylbutazone and isoxicam similarly this compound was shown to passes analgesic and antipyretic activity comparable to the former drugs. Sondhi et al 48 synthesized some mono, bi and tricyclic pyrimidine derivatives and evaluated them for analgesic activity using phenyl quinine writhing assay. 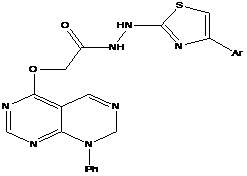 Miscellaneous activity: A small library of 20 tri-substituted pyrimidines was synthesized by Anu et al 52 evaluated for their in vitro anti-malarial and anti-tubercular activities. Out of the total screened compound, 16 compounds have shown in-vitro anti-malarial activity against Plasmodium falciparum in the range of 0.25-2 µg/ml and 8 compounds have shown anti-tubercular activity against Mycobacterium tuberculosis at a concentration of 12.5 µg/ml. 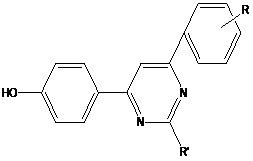 Verma et.al.53 synthesized 2-91-piperidinye/1- pyriralidinyl0- 4-substituted phenyl -6 (3, 5- di bromo-4-hydroxy phenyl)-pyrimidines. The herbicidal activity was carried out by Cyanamid India Ltd. valsad plant valsad in collaboration with Cyana mid U. S. A. compound were tested both pre and post emergence against 18 species in an 80% acetone solution ± 0.2% in general 1 Kg activity compound at volume of 1600 lit/hec was used for this test. The minimum sample used in this test was 250 mg. 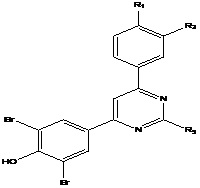 Bernier et al 55 synthesized pyrimido [4, 5-d]pyrimidines derivative and evaluated for antidepressant activity, binding at presynaptic α-receptor site spectral data determined in solution and in the solid state allowed establishment of the relationship between activity and conformation of the molecule.

2-Alkyl/aryl amino methyl-4-alkyl/aryl naphtha [2, 1- b] furo [3, 2- d] pyrimidines prepared by vaidya et al 59 the activity was evaluated as earth worms pheretima posthuma by reported method. The compounds were tested at a dose of 0.001 mol/ml suspended in tween-80 piperazine citrate suspension was taken as standard.

CONCLUSION: As a result of vigorous research; a vast literature has been accumulated over the years and chemistry of pyrimidines continue to be blossoming field it would also be interesting to see development of pyrimidines as potentially active therapeutic compound.