ABSTRACT: A simple, accurate, precise RP-HPLC method has been developed for the estimation of Rizatriptan Benzoate. Good chromatographic separation was achieved by isocratic mode with Sodium dihydrogen orthophosphate as buffer (pH 3.5): Acetonitrile (80:20), as the mobile phase with Zorbax SB phenyl column (250 × 4.6 mm i.d, 5 µ particle size) as stationary phase with a flow rate of 1.0 ml/min at ambient temperature. Quantification was attained with UV detection at a wavelength of 255 nm. The retention time for Benzoate and Rizatriptan was 3.85 minutes and 4.32 minutes, respectively. The calibration graphs were linear in the concentration range of 5 – 25 μg/ml. The developed method was effectively applied to formulated fast disintegrated sublingual tablets of Rizatriptan Benzoate, and the % assay of the drug was found to be 96.4%. This method was statistically validated for the determination of accuracy, precision, specificity, linearity, range, the limit of detection, the limit of quantification and system suitability according to ICH guidelines.

INTRODUCTION: Rizatriptan Benzoate (RTB) as shown in Fig. 1 is chemically known as N, N-dimethyl-5-(1H-1, 2, 4 – triazol – 1 - ylmethyl) -1H indole-3-ethanamine monobenzoate is a selective 5-hydroxy tryptamine 1B/1D (5-HT 1B/1D) agonist used for the treatment of acute headache in migraine. RTB acts by exciting the 5-HT 1B/1D receptor by obstructing the neuronal conduction of the neuropeptide (5-HT) and causing dilation of the cranial blood vessels, thereby reducing the headache caused due to migraine.

RTB is approved for treating migraine at dose strength equivalent to 5 mg and 10 mg of rizatriptan. RTB is a white crystalline solid, soluble in water (42 mg/ml) and shows a mean oral bioavailability of 40% (due to first pass hepatic metabolism) with a half-life of 2-3 hours 1. To enhance the bioavailability of RTB, fast disintegrating sublingual tablets were formulated which bypasses first-pass hepatic metabolism and having a faster onset of action 2.

An attempt was made to develop an RP-HPLC method for the estimation of RTB for the optimized formulation of fast disintegrating sublingual tablets. The proposed method was optimized and validated according to ICH guidelines 19, 20.

Preparation of Sodium Dihydrogen Orthophosphate Buffer (pH 3.5): 2.76 g of sodium dihydrogen orthophosphate monohydrate was accurately weighed and taken in a 1000 ml flask. About 500 ml of HPLC grade water was added to dissolve NaH2PO4. The final volume was adjusted to 1000 ml with HPLC grade water. 2ml of triethylamine was added, and the pH of the solution was adjusted to 3.5 ± 0.05 with orthophosphoric acid. The prepared buffer was then filtered through a 0.45μm nylon membrane filter and was degassed with the help of a sonicator.

Preparation of Mobile Phase: The mobile phase was prepared by mixing 800 ml of sodium dihydrogen orthophosphate buffer (pH 3.5) and 200 ml of Acetonitrile. The prepared mixture (80:20) was filtered through a 0.45 μm membrane filter and was degassed in an ultra-sonicator.

Preparation of Standard Solution: A stock solution of rizatriptan Benzoate standard was prepared by accurately weighing 50 mg of RTB working standard and transferred into a 50 ml volumetric flask, about 25ml of diluents (buffer pH 3.5: acetonitrile 80:20) was added and sonication was done to dissolve the drug. The volume was adjusted to the mark with the mobile phase. The primary standard solution was prepared by diluting 5ml of standard stock solution to 50ml using mobile phase. From this, 20 ml of solution was further diluted to 100ml with mobile phase to prepare the working standard solution having a concentration of 20 µg/ml of RTB.

Preparation of Sample Solution: Twenty tablets were weighed and finely powdered. About 141.3 mg of tablet powder having weight equivalent to 10 mg of RTB was weighed accurately and transferred to 50 ml volumetric flask. About 25ml of mobile phase was added and sonicated to dissolve the drug completely. The volume was adjusted to the mark with the mobile phase. The resulting solution was then filtered through a 0.45 µm membrane filter to prepare a stock solution of the tablet sample. Further, 5ml of sample stock solution was diluted to 50 ml using mobile phase to prepare the working sample solution having a concentration of 20 µg/ml of RTB.

Injection of Standards and Samples into the Chromatographic System: 10 µl of each standard and sample solution was injected into the chromatographic system, and the peak area of RTB was measured. % assay of the drug was calculated to be 96.45% using the formula,

Selection of Wavelength: 10μg/ml solution was diluted from the primary stock solution and was scanned between 200nm-400nm using UV-VIS spectrophotometer (Shimadzu UV-1601). Maximum absorption of the drug was found to be at 225nm (λmax).

System Suitability: To determine the adequate resolution and repeatability of the proposed method, system suitability tests were carried out. The parameters like retention time, number of theoretical plates, asymmetry factor were investigated by injecting standard solutions of the drugs six times, and the results along with standard values are given in Table 1. From the results, it was observed that all the values are present within limits indicating good performance of the system.

** Sum of Peak areas of Rizatriptan and Benzoate

Linearity: Standard solutions for linearity tests were prepared from the primary standard stock solution at different concentration levels, in the concentration range of 5, 10, 15, 20, and 25 μg/ml respectively. The prepared solutions were injected, and their peak areas were measured and tabulated in Table 2. 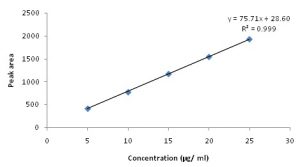 Repeatability: The repeatability of the sample was measured at 100% concentration of the drug and was assessed by carrying out six independent assays of RTB, as showed in Table 3. The measurement of the peak areas was expressed in terms of % RSD and were found to 0.28. (Standard Value, % RSD ≤ 2).

**Sum of Peak areas of Rizatriptan and Benzoate

Inter-Day precision: The Inter-day precision of the sample was measured at 100% concentration of the drug on three different days and was evaluated by carrying out independent assays of RTB, as shown in Table 4. The measurement of the peak areas was expressed in terms of % RSD and was found to be 0.11 (Standard Value, % RSD ≤ 2).

Chromatogram of blank solution (placebo) is given in Fig. 3 Chromatograms of standard and sample preparation are shown in Fig. 4 and Fig. 5 respectively. It was observed that the diluent or the excipient peaks did not interfere with the drug peaks. 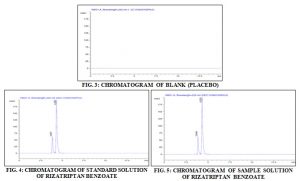 Robustness: The robustness of the method was evaluated by deliberately varying the parameters of the optimized method. The effect of change in flow rate and pH of the mobile phase on retention time and % assay were examined. The results, as shown in Table 7 indicated that the proposed method was robust and was not affected by variations.

DISCUSSION: Various trials were performed initially with the standard Rizatriptan Benzoate by using different mobile phases, different pH conditions, columns, organic modifiers like acetonitrile and water in the mobile phase by varying one parameter at a time and keeping other parameters constant. The separation, peak shapes were found to be symmetrical in adopted chromatographic conditions with Zorbax SB phenyl column (250 mm × 4.6 mm i.d, 5 µ particle size) and a mobile phase consisting of Sodium dihydrogen orthophosphate buffer (pH 3.5): Acetonitrile (80:20). The detection was carried out at 225 nm with a flow rate of 1.0 ml/min with a column temperature of 30 ºC. The retention time was found to be 3.85 for Benzoate and 4.3 for Rizatriptan.

The proposed method was applied to formulated fast disintegrating sublingual tablets of RTB, and the % assay was found to be 96.4%. The method was validated according to ICH guidelines and showed no interference from the solvent or excipient. The correlation coefficient of the RTB was found to be 0.999, indicating good linearity in the concentration range of 5 – 25 µg/ml. The method was successfully applied to the formulated dosage form. Accuracy was determined at three different concentration levels of 80%, 100%, 120%, and the % mean recovery was found to be 100.6%, indicating the accuracy of the method. The intraday precision and inter-day precision having a % RSD value of less than 2 indicates a good degree of precision of RTB. The study of robustness shows that the proposed method is robust and is unaffected by small, deliberate variations in the parameters.

CONCLUSION: A simple, accurate RP-HPLC method has been developed for the quantitative estimation of Rizatriptan Benzoate in formulated fast disintegrating sublingual tablets and can be functional in routine analysis for bulk and formulated dosage forms in Quality control laboratories and Educational institutions.

ACKNOWLEDGEMENT: The authors are thankful to Natco Pharma (Hyderabad, India) for providing Rizatriptan Benzoate as a gift sample and are grateful to Sipra Labs, Hyderabad for their help to carry out the work.