ABSTRACT: A specific, rapid, and sensitive LC-MS/MS assay was developed and validated for the determination of Naftopidil in human plasma. Naftopidil d7 was used as an internal standard (IS). A faster and one-step protein precipitation (PP) technique was employed for sample preparation. The processed samples were chromatographed on a C18 column using ammonium formate (5mM) buffer in combination with acetonitrile as the mobile phase. The mass spectrometer was operated in multiple reaction monitoring (MRM) mode, and the protonated ions were monitored at m/z 393→190 transitions for the naftopidil and m/z 400 →190 transitions for the IS. The calibration curve was linear over-concentration of 0.30-300 ng/mL, and the method was fully validated as per the recent U.S. FDA Bioanalytical method validation guideline. The precision (%CV) and accuracy results across five concentration levels in 3 different runs were found to be within the specified limits. The present work complied with our initial research objectives and successfully demonstrated the applicability to pharmacokinetic studies.

INTRODUCTION: Benign prostatic hyperplasia (BPH) is a histological condition and most common urological disorder in elderly men. Hypertension is also a common disease in elderly age adults. Selective α1-adrenoceptor (AR) antagonists are well known to be an effective, non-invasive treatment option for patients with BPH 1, 2. Naftopidil Fig. 1 is a novel α1-adrenergic receptor antagonist used to treat lower urinary tract symptoms (LUTS) due to benign prostatic hyperplasia (BPH) 3-6. The drug is also used to treat hypertension and it acts by blocking α1-adrenergic receptor and Ca2+ antagonism in vascular smooth muscle 7, 8.

Naftopidil is safe and adverse effects by the drug on blood pressure/cardiovascular system are unusual.

In concern with literature, few high-performance liquid chromatography (HPLC) 9-11 methods have been developed to analyze naftopidil in biological samples. In general, HPLC based method are not sensitive enough, specific, and required longer chromatographic run time. Hence, rapid, more specific, and sensitive methods such as LC-MS/MS are needed. So far, only one LC-MS/MS was reported in literature for the determination of Naftopidil. The authors Jain et al., 2015 12 published an LC-MS/MS assay for the quanti-fication of Naftopidil in plasma. The reported LLOQ was 0.495 ng/mL, and Propranolol was used as an internal standard (IS). Samples were prepared by using liquid-liquid extraction (LLE) involved many steps like drying, evaporation, and reconstitution.

Moreover, the method utilized relatively large plasma volumes (˃200 µL), which may not be favorable for routine bioanalysis/bioequivalence studies.

The objective of the proposed work is to develop a sensitive LC-MS/MS assay for the quantification of Naftopidil in human plasma. Naftopidil d7 Fig. 1 was used as an IS to minimize the matrix effect and recovery variation between naftopidil and the IS. Moreover, the present assay utilized relatively smaller plasma volumes (50 µL only) and achieved higher sensitivity (0.30 ng/mL) compared to reported method 12. With the proposed LLOQ of 0.30 ng/mL, Naftopidil was quantifiable beyond 24 h during pharmacokinetic studies in humans. In the present work, we have demonstrated a fully validated LC-MS/MS assay for the determination of naftopidil in human plasma and its application to a pharmacokinetic study in healthy Indian male subjects under fasting conditions. 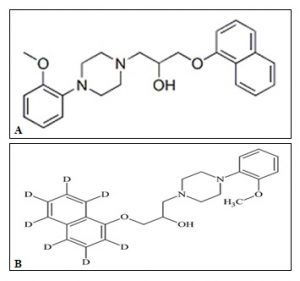 Sample Preparation: A simple PP method was used to extract the analyte from plasma. The frozen plasma samples were allowed to thaw in a water bath and vortexed. Each plasma sample (50 µL) was mixed with 20 µL of ammonium acetate buffer (50 mM). To this, 300 μL of IS dilution (200 ng/mL in acetonitrile) was added and vortexed for 30 s. Then, the samples were centrifuged at 4000 rpm for 5 min, the clear sample was loaded into auto-sampler vials, and 10 μL was injected into the system.

Pharmacokinetic (pK) Study Design: A pK study in healthy South Indian male subjects (n = 6) was conducted for Naftopidil hydrochloride 50 mg under fasting condition. An age group of 20-45 years with body weight not less than 50 kg, with a body–mass index (BMI) of ≥18.0 kg/m2 and ≤24.5 kg/m2 were selected for the study. Consent from all the participants was obtained before registration into the study. Each subject was screened for their healthiness before taken into the study. Venous blood samples were collected into vacutainer tubes (4 mL, K2 EDTA) at pre-dose and 0.16, 0.33, 0.5, 0.75, 1, 1.25, 1.5, 2, 3, 4, 6, 8, 12, 24, 36, and 48 h post-dose, and the plasma was separated by centrifuging at 4000 rpm for 10 min. The plasma samples were stored at –70 ± 10 °C till their use. Naftopidil pK parameter was calculated using WinNonlin software (Version 5.2) and a non-compartmental model was employed in the calculation of the results.

Method Development: Nowadays, LC-MS/MS is the most extensively used analytical tool for quantification of drugs in a variety of biological matrices. In the present work, an LC-MS/MS assay was developed to quantify Naftopidil in in-vivo samples obtained for pharmacokinetic and bioequivalence studies. Mass spectrometric (MS) conditions were properly adjusted to maximize the analyte signal by infusing the analyte solution.

Naftopidil response was high in the positive ion mode than the negative ion mode. The compound parameters (DP, CE, and CXP) were properly adjusted in multiple reaction monitoring (MRM) mode to get high intense and reproducible product ion spectra. Also, a satisfactory and consistent response was obtained by changing the source dependent parameters (Ion source gas 1 & 2, Source Temperature, and Ion spray voltage). Dwell time for the analyte and the IS was set at 200 ms. The positive ion spray mass spectrum showed a protonated ion by monitoring the transition pairs of m/z 393 → m/z 190 (product ion) for naftopidil Fig. 2a and m/z 400 → m/z 190 (product ion) for the IS Fig. 2b. Chromatographic data were processed with Analyst Software™ (version 1.6.1).

FIG. 2: POSITIVE MODE PRODUCT ION MASS SPECTRA OF (A) NAFTOPIDIL AND (B) NAFTOPIDIL D7 (IS)

The finest chromatography with short retention time (RT) was achieved on Zorbax, SB C18 (50 × 4.6 mm, 3.5 µm) column. The mobile phase flow rate was equally important to produce an acceptable peak shape with short run time and was set at 0.5 mL/min. The RT of Naftopidil and the IS was 1.1 min with a total run time of 2.2 min.

The published method 12 utilized LLE procedure to extract the naftopidil from plasma. As an aim to develop a modest and one-step sample extraction procedure, PP was adopted for the present purpose. Moreover, PP is much affordable and easy to perform compared to solid-phase extraction (SPE) or LLE and can easily adapt the method to other laboratories 14-16. Thus, PP was carried out using acetonitrile and methanol with and without the addition of extraction additives, namely ammonium acetate, formic acid, ammonium formate, etc. The extracts were clear, but the recovery was low (50-60%) with both the solvents. The addition of ammonium acetate to the plasma samples helped in refining the extraction recovery. Precipitation with acetonitrile and ammonium acetate as extraction additive gave the highest recovery for the analyte without matrix effect. Stable labeled isotopes as an IS is recommended to overcome the matrix effect in LC-MS analysis 14-16. Also, these standards will increase the bioanalytical assay precision and accuracy. Hence, Naftopidil d7 was used as an IS and gave good precision and accuracy results.

Carryover, Selectivity, Specificity and Sensitivity: System suitability test was performed every day before stating the analysis by injecting six consecutive injections of an extracted sample (MQC2) with the IS. The % CV for area ratio was less than 2.0% during the entire course of analysis. Method carryover was critically evaluated by injecting the highest concentration (ULOQ) of the analyte. An extracted blank was injected after injecting the ULOQ sample, and no carryover (0.00%) was found in the blank sample.

Fig. 3 and 4 depict an extracted blank plasma sample and blank sample along with the IS, respectively. The plasma blank sample showed no interference at RT or mass transition of analyte. Similarly, the proposed IS (Naftopidil d7) didn’t interfere with the analyte of interest. Six blank plasma lots (4 normal K2 EDTA and one lipemic and one hemolytic plasma) were screened for selectivity test. No interference was detected from plasma components in all the lots tested at the RT of Naftopidil and the IS. 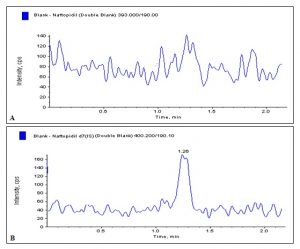 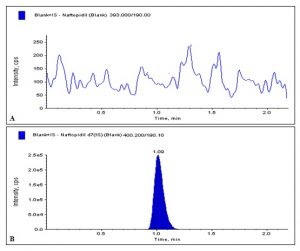 FIG. 4: A MODEL MRM CHROMATOGRAM OF EXTRACTED BLANK SAMPLE WITH THE IS 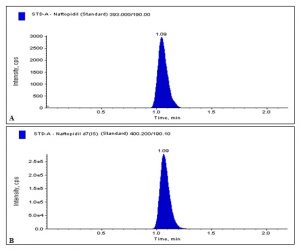 FIG. 5: A MODEL MRM CHROMATOGRAM OF EXTRACTED LLOQ SAMPLE WITH THE IS

Matrix Effect: Matrix effect was determined by calculating the IS-normalized matrix factor at LQC and HQC concentration levels. No significant ion suppression or enhancement effect was observed in the tested plasma lots (n=6). The IS-normalized matrix factor valve calculated at LQC and HQC level was 0.99 and 1.01, respectively, which indicated no matrix effect on the proposed assay results Table 2.

Linearity, Precision and Accuracy: A total of three standard curves were generated in the concentration range of 0.30-300 ng/mL for Naftopidil in two different days. A regression equation with a weighting factor of 1/x2 of the drug to the IS was given the best fit for the concentration–detector response relationship. The correlation coefficient (r2) for all the batches were ≥0.99. The accuracy and %CV across calibrators ranged from 96.17% to 104.11% and 1.06% to 3.08%.

Intra-day and inter-day precision and accuracy (P&A) were calculated by analyzing three P&A batches in two days. Two batches were run in a day (intra-day), and another batch was analyzed on other day. The results are summarized in Table 3.

Sample Dilution Effect: The in-vivo study samples concentration above the proposed calibration range can be analyzed by diluting the samples with screened blank plasma. Dilution QC sample (DIQC) was prepared by spiking the 3X concentration of ULOQ (i.e., 900.00 ng/mL). These samples were processed by diluting them two-and-four folds with screened blank plasma. Dilution factor 5 and 10 was applied to quantify these QCs under the undiluted calibration curve standards.

Also, analyte stability in plasma, as well as in processed samples, were studied under different conditions. Spiked samples were stable at room temperature (benchtop stability) for 8 h, stable up to 4 freeze-thaw cycles, and stable for 75 days at –70 ± 10 °C upon long term storage. Similarly, processed samples were stable in autosampler for 56 h, after 40 h of reinjection and stable 60 h in refrigerator 2-8 °C. The mean % nominal values of the analyte were found to be within ±15% of the predicted concentrations for the analyte at their LQC and HQC levels in Table 4. 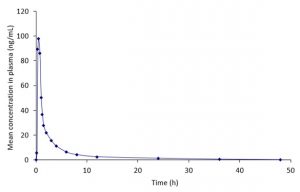 Pharmacokinetic Results: The suitability of the proposed method for in-vivo use was demonstrated by analyzing plasma samples attained for a pK study in healthy subjects. The mean concentration-time profiles of Naftopidil after a single oral dosage of 50 mg Naftopidil hydrochloride is shown in Fig. 6 and the corresponding pharmacokinetic para-meters are listed in Table 5.

CONCLUSION: In conclusion, the present work complied with our initial research objectives and successfully demonstrated the applicability to pharmacokinetic studies. The specific LC–MS/MS assay proposed in this manuscript is simple, fast, and sensitive concern for the determination of Naftopidil in human plasma. All the validation experiments were conducted as per the recent FDA guidelines. This method makes use of isotope-labeled compound as an IS to avoid possible matrix influence on the results and to limit the variability in recovery between the analyte and the IS. The modest and one step PP procedure gave the highest recoveries for the analyte from plasma.

The standard curve was linear in the range of 0.30-300.00 ng/mL. Naftopidil was stable under various conditions. The method was successfully applied to a pK study of naftopidil in 6 healthy South Indian subjects.

ACKNOWLEDGEMENT: The authors gratefully acknowledge PCR Laboratories, Hyderabad, for providing the necessary facilities for carrying out this study.