A simple, sensitive and reproducible method was developed and validated for the simultaneous estimation of Diethylcarbamazine and Levocetirizine in its tablet formulation by reverse phase high performance liquid chromatography using Waters1515 HPLC with Diethylcarbamazine and Levocetirizine simultaneously. HPLC-PDA detector at the λmax of 253nm, using Hypersil-BDS C18 (250×4.6 mm. 5 μ) column. The mobile phase used was potassium dihydrogen orthophosphate buffer (pH: 5): acetonitrile (20:80 v/v) with isocratic flow (flow rate 1 ml/min) and the pH was adjusted with orthophosphoric acid. The compounds Diethylcarbamazine, Levocetirizine were eluted at 2.04, 5.54 min, respectively. The peaks were eluted with better resolution. The method was accurate with assay values of 99.67% and 99.81% w/w, precise (%RSD) with 0.3and 0.5, percentage recovery values of pure drug were in between 99.4% to 100% and 99% to 99.4% which are very sensitive with limit of detections (LOD)'s 2.42 and 0.08ppm and limit of quantification (LOQ)'s 7.42 and 0.2ppm, these results are within the range of limits 98% to 101% which indicates that the method was accurate and linear with R2 values 0.999 in the range of 20to 120 μg/ml 0.8 to 4.8 μg/ml for Diethylcarbamazine and Levocetirizine, respectively.

INTRODUCTION: Diethylcarbamazine (DEC) is a piperazine anthelmintic agent indicated for the treatment of individual patients with lymphatic filariasis, tropical pulmonary eosinophilia and loiasis. The chemical name of the drug is N, N-diethyl-4-methylpiperazine-1-carboxamide citrate]. It acts by inhibiting arachidonic acid metabolism and it is a polar compound.

It is more effective with fewer side effects than second generation drugs. It works by blocking histamine receptors and it is polar compound in nature. Both drugs have good pharmacological actions. Many formulations are marketed individually or combination with other drugs.

Materials: All the chemicals used were of HPLC grade. Potassium dihydrogen orthophosphate was obtained from Qualigens fine chemicals, orthophosphoric acid and acetonitrile were obtained from Rankem Fine Chemicals, Mumbai, India. All the drugs DEC citrate, LEVC dihydrochloride and losartan potassium (IS) were purchased from Sigma Aldrich chemicals, Bangalore, India. Tablets of Levodec (equivalent to 150 mg of DEC and 2.5 mg of LEVC, Reign (India) Formulations Pvt. Ltd, and Mettupalayam, India) were purchased from a local pharmacy. The ultra pure water used was collected from Millipore system.

The primary target in developing this method is to achieve simultaneous determination of DEC and LEVC in the tablet formulation under common conditions that will be applicable for routine quality control of the product in laboratories. Various mobile phases such as potassium dihydrogen orthophosphate, Acetonitrile of pH 5.0 with 20:80 ratios were used as mobile phase. At 20:80 ratios, the peaks were eluted at 2.047 and 5.540 min with symmetric and well retained Peaks. For the present study 20:80 ratio was selected.

Effect of flow rate Flow rates of 0.9 and 1.1 ml/min were used and chromatograms were recorded. All these flow rates gave symmetric and well retained peak. For the present study the flow rate 1.0 ml/min was selected. Finally the present mobile phase with flow rate of 1ml/min was used for method development. The ionization of drugs takes place at pH 5. The UV wavelength was optimized at 253 nm for both detection and quantification. At this wavelength both drugs gave significant absorption. No significant peaks were observed from the formulation matrix, indicating no interference from the matrix of the formulation. By this method the peaks were better resolved with retention time’s 2.047±0.05 min for DEC, 5.540±0.02 min for LEVC.

Linearity of the responses of the two drugs were verified at six different concentration levels ranging from 20to120 μg/ml for DEC and 0.8 to 4.8 μg/ml for LEVC, respectively. The calibration curve was constructed by plotting response factor (F) against concentration (C) of each drug.

Accuracy: Accuracy of the method was determined in terms of recovery by spiking to the pre-analyzed sample of two different concentrations 100 μg of DEC and 4.0 μg of LEVC standard drugs and the mixtures were reanalyzed by this method for three times. 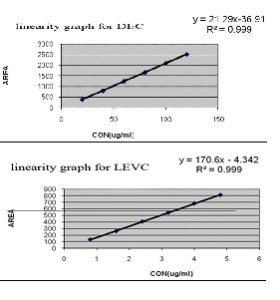 Precision: Precision study was performed to find out system and method precision variations in the estimation of DEC and LEVC of different concentrations, with the proposed method it was found that % RSD is not more than 1% (%RSD of DEC and LEVC are 0.3 and 0.5 respectively in system precision and 0.47 and 0.82 respectively in method precision); as these results are within the range of limits, which indicates that the proposed method has good reproducibility. The results are good for both method precession and system precision.

System Precision of DEC and LEVC:

Method Precision of DEC and LEVC:

Robustness: Robustness of the method was determined by making slight changes in the chromatographic conditions for change in the ratios of mobile phases, pH and flow rate as mentioned above. . No marked changes were observed. System suitability parameters were checked which include theoretical plate/meter (less than 2500 for both DEC&LEVC), resolution factor (15.873 for LEVC), Tailing factor (1.3 for DEC, 1.5 for LEVC)

Assay: Weigh not less than ten capsules. Accurately weigh and transfer powder equivalent to 58.9mg of sample into 50ml volumetric flask, to this 25ml of diluent was added, sonicated and  made up to the volume and then filtered. About 10ml of the above solution was made up to 100 mL by using the same diluent.

SUMMARY AND CONCLUSION: The results showed that the method provided adequate accuracy, precision, sensitivity, reproducibility with better resolution for the analysis of Diethylcarbamazine citrate and Levocetirizine dihydrochloride in formulations either simultaneously or individually. Thus, it can be concluded that the proposed method can be used for the routine analysis of these two drugs in bulk as well as pharmaceutical preparations without any interferences.

ACKNOWLEDGEMENTS: The authors thank the founder of JSS Mahavidyapeetha, Mysore and Dr. B. Suresh, Vice-chancellor, Mysore for providing the facilities to carry out this work.