Waste is anything, which is not used by any owner, producer and processor, even though it has always been a part of the earth’s ecosystem. Enriched Soil is a good source for the isolation of power full and potential microorganisms which produces specific enzymes which target the waste and in turn produces pharmacologically viable products; Microbes hold this prominent position because of their diversity and proven ability to produce new enzymes which is capable of degrading the waste from various industries. In this study we have concentrated on Fruit, coconut, leather, poultry, and paper industrial waste. Vellore is a Industrial developing  medium city surrounded by three states Andhrapradesh ,Tamilnadu and Karnataka and the soils are highly enriched with industrial waste  the  studies in this direction is rudimentary and hence this study proves the pivotal  role on enriched soils in screening of potential microbial enzymes  which are used in various pharmacy applications.

INTRODUCTION: Soil is a natural body and natural laboratory that consists of different layers composed primarily of minerals, which varies from their parent materials in their texture, structure, consistency, color, chemical, biological and other physical characteristics (Fig. 1).

Strictly speaking, soil is the depth of regolith that influences and has been influenced by plant roots and may range in depth from centimeters to many meters. Enriched soils are playing a key role for screening of microbes which degrades the waste 1, 2.

Vellore is a district which comes under Tamil Nadu state. It is located at 12.93˚N and 19.13˚E. Climate of Vellore district is very helpful for growth of microorganism enormously.

Temperature varies in Vellore as 12˚C to 40˚C which is the favorable temperature to grow the microbes. Coconut tree are found in a big number. Coconut fruits are used by the people in unripe form as well as in dry form. Coir of coconut contains mainly cellulose, lignin and pectin substances.

Due to pectin substance present in the coconut waste dumped in soils, one enzyme pectinlyase is used to degrade that coconut waste. Pectinlyase is produced generally by soil organism such as bacteria and fungi.

Enriched soils containing Microorganisms are rich sources of xylanase enzymes. In our study we have screened some bacteria which produce extra cellular xylanase .The structural diversity associated with the xylan component from different plants gives us concept for requirement of various xylan-degrading enzymes which can utilize different lignocellulosic substrates that are being used as raw materials for the paper industry. In order to use xylanase for pulp treatment, it is required that enzymes should not have any additional cellulolytic activity, since the quality of paper adversely affected by cellulase. To overcome this problem we did screening, mechanistic characterization and tentative optimization of microbial xylanase will be discussed.

Indian poultry industry is world’s 2nd largest poultry industry growing at the phenomenal rate of 12-15 percent every year. But this growth of industry is also accompanied with the problem of increased feather waste production. It will in turn aggravate the need of novel methods of waste disposal which are ecologically safe, cheap as well as of commercial benefit.  Feather is composed of over 90% protein, the main component being keratin specially β-keratin and constitutes the most abundant keratinous material in nature. Keratin is the most abundant structural protein in skin, hair, wool, silk, horn, nail, hoof and feathers.

Keratins are fibrous, insoluble and hard to  degrade scleroproteins of rigid structure due to the presence of the high degree of cross-linking by disulfide bonds, hydrogen bonding and hydrophobic interactions and hence recalcitrant to degradation by common proteolytic enzymes like trypsin, pepsin and papain. The mechanical stability of keratin is also attributed to the tight packing of the protein chains in α-helix or β-sheet structures and their linkage by cystine bridges which maintain the three dimensional shape of the molecule 4. These proteins are ubiquitously present throughout animal bodies and have high sulfur content due to sulfur containing amino acids cystine, cysteine and methionine.

In mature chicken, feather accounts up to 5-7% of the live weight. Worldwide, several million tons of feathers are generated annually as waste by poultry-processing industries 5.

Considering its high protein content, this waste could have a great potential as a source of protein and amino acids for animal feed and for many other applications. However, because of the insoluble nature of keratin and its resistance to enzymatic digestion by animal, plant and many known microbial proteases, use of feather as a source of value-added products has been very limited. Rather the large amount of feather produced and its localized accumulation around poultry-processing sites create a serious disposal problem leading to environmental pollution.

Collection of Soil Samples: The enriched soil samples needed for our work were collected from a number of places that had rich poultry waste, coconut, xylan, pulp waste content in the soils. The soil type and the environmental conditions prevalent differed from place to place. Three sets of samples were taken based on the number of years it had been left to degrade. The collected soil sample (along with degraded substrates) were stored in polythene bags and sprayed with physiological Ringer’s solution to maintain the viability of microorganisms present.

Isolation: We initially carried out serial dilutions of the soil sample. 1g of enriched soil was taken in 10ml of Ringer’s solution (Ringer’s solution was used so that the microorganisms were made viable). It was made to settle down 6, 7. From this first test tube 1ml of clear portion was pipetted out and introduced into the 9ml of Ringer’s solution in the second test tube. From the second test tube after proper mixing, 1ml was pipetted into the third test tube and so forth. Thus, it was serially diluted to 10-10 dilution. From the tenth test tube, 0.1ml was plated on the LB agar and spread out with duly sterilized L rod or Spreader. It was incubated at 34oC for 24 hours.

Perfectly pure isolated colonies were observed the next day based on Baiting we can isolate the microbes which degrade the waste. These serial dilutions had to be repeated many times because we were observing filmy growth for dilutions of 10-4, 10-6, 10-7, 10-8 that we had done prior to the 10-10 dilution.

Petriplates of the above mentioned LB and Starch Casein agar-agar were prepared after its subsequent sterilization by autoclaving. 125ml of LB agar was prepared in 250ml conical flask plugged with cotton and autoclaved for 30 minutes. Such low volume of agar-broth was taken to prevent contamination of agar during the sterilization process and after. Antifungal agent Fluconazole (0.5 ml) was introduced agar before plating. This was done to prevent fungal growth. The petriplates to be used were also sterilized by autoclaving and air dried in laminar flow to prevent contaminaton.

The laminar flow was sterilized by UV rays 20 minutes before the start of the experiment and the L rods to be used were dipped in 70% ethanol solution and shown to the flame each time it was to be used. Any moisture content of the petriplate was removed prior to pouring the agar. This was done so that the water or moisture droplets trapped inside the petriplates would not lead to the contamination of agar, by the presence of vegetative cells. Thus these vegetative cells were destroyed by showing to the Bunsen flame.

After the above initial isolation process, a number of colonies were marked and singled out and thereafter streaked onto new agar plates (quadrant/tertiary streaking) so as to get pure culture of the colonies 8. This type of streak was followed so that with each streak from the mother inoculum, colonies were singled out in a uniform manner. After its incubation for 24 hours and satisfactory growth, it was stored under 4oC to prevent contamination. Thin para-films were used to seal the sides of the petriplates to prevent any sort of contamination. Pure cultures were preserved.

Assay of By-Products: The degradative products from the fermentation media were assayed by taking samples of fermented broth at different time intervals in the three media.  Cysteine was found to be the major degradative product with all the test strains followed by cystine.  Inorganic sulfate and thiosulfate were released in significantly low quantities.  Among the media tested the liberation of all the degradative compounds were substantially higher in production media followed by basal media and basal media without glycerol.  The digestion of keratin is found to be accompanied by the marked alkalization of the medium along with high activity of proteolytic exo-enzyme in culture media, favoring the accumulation of cysteine 9, 10. 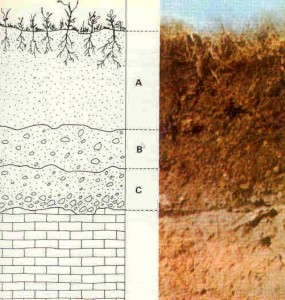 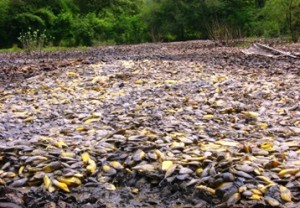 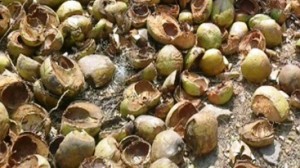 FIG. 3: WASTE OF COCONUT AND COCONUT COIR NEAR VELLORE 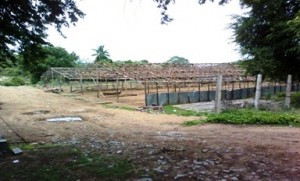 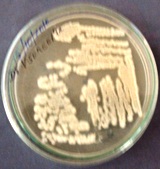 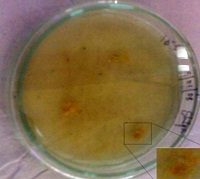 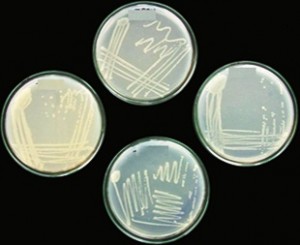 The present study of the analysis of degradative products clearly indicated that cysteine and cystine together constituted more than 90% of the degradative sulfur products released by 240-288 hrs  of fermentation.  Slow release of cysteine during initial growth phase upto 96hrs suggested that the organisms first utilized the more readily digestible non-keratinous material available in the media.

Gradual exhaustion of the alternate source led to extensive degradation of keratin with resultant accumulation of cysteine and cystine in the medium which reached maximum by 240-288hrs of fermentation, which was obviously due to active growth of the organism on keratin substrates.

Degradation and Bioremediation is a meticulous process and byproducts and residues are sometimes having economic and ecological value. Degradation of pectin by Extracellular pectinase is a significant and step wise process, during breaking of bonds several products were noticed 11.

In Tamil Nadu state, Vellore district faces the problem of sensitive pollution due to hundreds of Fruit,pulp, leather and tannery industries are located around Vellore and its nearby towns such as Ranipet, Ambur and Vaniyambadi. The district is the top exporter of finished leather goods in the country. Vellore leather accounts for more than 37% of the country's export of Leather and Leather related products such as finished leathers, shoes, garments, gloves. For every ton of raw hide processed, the amount of solid waste produced is about 450-600 kg.

Amino acid production from poultry waste is an significant approach due to microbes which are producing potential keratinase and collagenase enzymes  and Leather making can be viewed as a process that uses potential waste from the meat industry (i.e. HIDES or SKINS) to create leather via the tanning process.

Despite the leather industry making traceable and visible impacts on socio-economic through employment and export earnings, the industry has gained a negative image in society owing to the resulting pollution. So treatment of leather hides and tannery effluents can solve the problems of environmental pollution. Along with this we are going to identify some useful products from these wastes, like:

Glue and Gelatin: The main raw material for glue and gelatin are raw hides and skin. These raw materials are abundantly present in the wastes produced by Leather and Tannery Industries have ample applications in pharmaceuticals and by products cystein and cystine can be used in drugs manufacturing etc. Thus we have attempted a trial to study enriched soils sources for potential microbes which degrade the waste generated from various Industries.

ACKNOWLEDGEMENT: The author wants to express her gratitude to Dr G. Viswanathan Chancellor, VIT for constant encouragement, Raj Vuppu Singapore for his motivation, analysis and help,  sincere thanks to DST and Villgro for providing funds and also to VIT University for providing infrastructure facilities for completion of this research.