Categories Menu
Home » A SIMPLE METHOD FOR THE ISOLATION AND ESTIMATION OF URSOLIC ACID IN ALSTONIA SCHOLARIS R. BR.

A SIMPLE METHOD FOR THE ISOLATION AND ESTIMATION OF URSOLIC ACID IN ALSTONIA SCHOLARIS R. BR.

A SIMPLE METHOD FOR THE ISOLATION AND ESTIMATION OF URSOLIC ACID IN ALSTONIA SCHOLARIS R. BR.

INTRODUCTION: Alstonia scholaris R.Br (Apocynaceae), a traditional plant commonly known as Saptaparni has attracted considerable attention due to the presence of pharmacologically and phytochemically important alkaloids 1-3. In contrast to alkaloids, there is scanty data on ursolic acid in this plant.

So the objective of the present study is also to develop a simple, sensitive and reproducible HPTLC method for the estimation of ursolic acid in the leaves of A. scholaris.

Extraction and Isolation: The air-dried and pulverized leaves of A. scholaris (500 g) were defatted with petrol ether (60º-80ºC) in a Soxhlet apparatus for 6 hrs. The petrol ether layer was discarded and the marc was dried and extracted with methanol for 4 hrs in a Soxhlet apparatus. The methanolic extract was filtered and concentrated in vaccuo to yield a residue (50 g). The solid residue was then extracted with diethyl ether in a Soxhlet apparatus for 2 hrs. The ethereal solution was decolorised using activated charcoal. The ether layer was evaporated to dryness and the residue left was crystallized several times with methanol. A white amorphous solid was separated (M.P. 260-265ºC) 14.  Identity of this compound was further confirmed by   spectral (UV, IR, 1H NMR and Mass) data.

Validation of HPTLC method: The method was validated according to the ICH guidelines on the validation of analytical methods 15. All results were expressed as percentages, where n represents the number of values. For statistical analysis Excel 2000 (Microsoft Office) was used. A 5% level of significance was selected.

RESULTS AND DISCUSSION: Ursolic acid, the standard marker was isolated by simple procedure avoiding the tedious column chromatographic technique. The standard marker was thoroughly characterized by spectroscopic analyses. UV (λmax (methanol): 212.4 nm, IR spectrum shows peak of –OH(alcohol) at 3427cm-1 and of C=O(carbonyl group) at 1689.53 cm-1, other peaks were obtained at 2650 cm-1 and 2358.7 cm-1.

The studies at the preliminary level revealed that toluene: acetone: acetic acid (10:2:0.07) was ideal as mobile phase and gave a sharp band at Rf (0.45) of ursolic acid. The solvent system was found suitable for test samples.

The spot of the chromatogram was visualized (pink) by spraying with 10% methanolic acid reagent followed by heating at 105º C for 5 minutes.

Chromatograms obtained from ursolic acid standard and from methanolic extract of leaves of Alstonia scholaris are shown in Figure 1 and 2 respectively. The HPTLC method was validated for precision, accuracy and repeatability. The validation parameters are stated in Table 1.

The method is specific for ursolic acid because it resolved the compound well from other components of Alstonia scholaris leaves (Figure 2). The standard compound was found to be present in test samples at the same Rf. 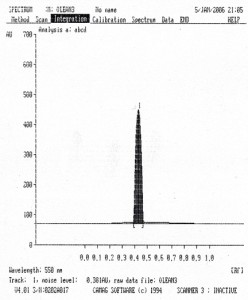 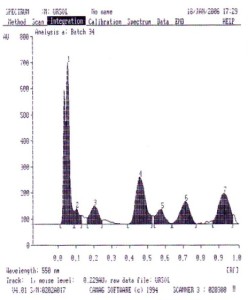 FIGURE 2: CHROMATOGRAM OBTAINED FROM METHANOLIC EXTRACT OF ALSTONIA SCHOLARIS R.BR LEAVES. PEAKS 1-3 AND 5-7 ARE FROM UNKNOWN COMPOUNDS. PEAK 4 IS THAT FOR URSOLIC ACID

The peak purity was confirmed by comparing the standard and test sample spectrum. A polynomial regression was obtained between response (peak area) and ursolic acid concentration in the range of 400-1200 ng/spot (Table 1). The calibration spots were represented by the polynomial equation Y= -0.00x2 + 12.47x + 2233.63, where y is the peak response and x= the amount of ursolic acid (ng); the co-relation co-efficient was 0.9998 (Figure 3). 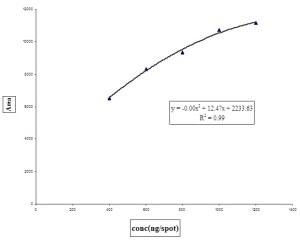 Instrument precision was studied by scanning the same spot of ursolic acid seven times (%CV=0.49). The repeatability of the method was tested by analyzing seven application of the same standard solution %CV=1.15. The intraday and interday RSD was found to be in range of 1.28-3.41% and 2.43-3.07% respectively.

The percentage of ursolic acid in the alcoholic extract of leaf samples were calculated using peak area parameters. The ursolic acid content in the leaves of A. scholaris was computed from the calibration curve. It was found to be 3.10±0.01 gm/100 gm of   powdered leaf sample of Alstonia scholaris (Table 2).

TABLE 2: HPTLC DATA FOR QUANTITATIVE ANALYSIS OF URSOLIC ACID IN THE LEAVES OF A. SCHOLARIS R. Br. (result for 5µL of test sample spotted)

ACKNOWLEDGEMENT: We, the authors, are thankful to our principal for providing us the necessary facilities and infrastructure for the successful completion of this research work.