A simple and cost effective spectrophotometric method is described for the determination of febuxostat in pure form and in pharmaceutical formulations. The drug was highly soluble in methanol so it was selected as the solvent system for the drug. This ensured adequate drug solubility and maximum assay sensitivity. The linearity range for febuxostat at its wavelength of detection of 315 nm was obtained as 0.2–15 µg/ml.The linear regression equation obtained by least square regression method, were Y =0.0802.X + 0.0036, where Y is the absorbance and X is the concentration (in µg/ml) of pure drug solution. The absorbance was found to increase linearly with increasing concentration of febuxostat, which is corroborated by the calculated correlation coefficient value of 0.9999. The limit of detection and limit of quantification was found to be 0.1743 µg/ ml & 0.5281 µg /ml respectively. The validity of the described procedure was assessed. Statistical analysis of the result shows high accuracy and good precision. The proposed method was successfully applied to the determination of febuxostat in pharmaceutical formulations without any interference from common excipients.

INTRODUCTION: Febuxostat chemically is 2- [3- cyano-4- (2- methlypropoxy) phenyl]- 4- methlythiazole- 5 -carboxylic acid (Figure 1). It is a non purine selective inhibitor of xanthine oxidase that is indicated for use in the treatment of hyperuricemia and gout 1.

In contrast to allopurinol, febuxostat inhibits both oxidized and reduced forms of xanthine oxidase 2, 3 and has minimal effects on other enzymes of purine and pyrimidine metabolism 3, 4. A study comparing febuxostat to allopurinol found that more individuals treated with febuxostat had decreased levels of uric acid, but there was no difference in the amount of initial gout flares or the surface area of gout tophi 5.

Literature survey revealed only one hplc method for the estimation of febuxostat and its related substances 6. The aim of the study is to develop a simple, sensitive, accurate and precise method for determination of febuxostat in pharmaceutical formulations and bulk drugs using UV spectrophotometer.

Instruments: A Shimadzu UV- Visible Spectro- photometer (UV-1700) with a matched pair of 10 mm quartz cells were used for experimental purpose. Shimadzu AUX-220 balance was used for weighing the samples.

Materials: Febuxostat was obtained as a gift sample from Lupin Limited, Vadodara (Batch No. 16/NV07/09). Methanol AR was procured from RFCL Limited, New Delhi. The commercially available marketed tablet brand containing Febuxostat, 40 mg in each tablet have been used for estimation. 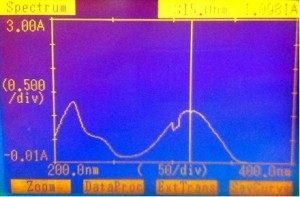 Procedure for formulations: Twenty tablets of febuxostat were accurately weighed, finely powdered and mixed. A portion of the powder equivalent to 10mg of febuxostat was transferred into a 10 ml volumetric flask and 10ml of methanol was added. The content of the flask was sonicated for 15 min and diluted to volume with methanol. This solution was centrifuged for 15 min at 5000 rpm to separate out the insoluble excipients. Appropriate solutions were prepared by taking suitable aliquots of the clear supernatant and diluting them with methanol to give final concentration (10μg/ml). The absorbance of these solutions was measured at 315 nm. The amount of febuxostat per tablet was calculated using the calibration curve.

Validation: Validation is one of the most important steps in method development for analytical determinations. The main validation parameters 7 such as linearity and range, accuracy and precision, limit of detection (LOD), limit of quantitation (LOQ), recovery and ruggedness were evaluated in developed method.

Linearity & Range: Under the experimental conditions, the calibration graphs of the absorbance versus concentration were found to be linear over the range of 0.2-15 μg/ ml for proposed method. The statistical analysis of data obtained for the estimation of febuxostat in pure solution indicated high level of accuracy for the proposed methods as evidenced by the low values of standard deviation and coefficient of variation (Table 1).

The linear regression equation obtained was Y = 0.0802.X + 0.0036, where Y is the absorbance and X is the concentration (in µg/ml) of pure drug solution (Figure 3). Linearity of the regression equation and negligible scatter of points for the two drugs by the proposed methods were demonstrated from the highly significant (p > 0.05) correlation coefficient value.

The reported slope values without intercept on the ordinate at 95% confidence limits, suggested that the calibration lines of febuxostat solutions in methanol did not deviate from the origin as the above-obtained values fall within the confidence limits. (Table 2) 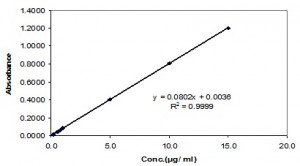 TABLE 2: REGRESSION ANALYSIS OF DATA FOR THE ESTIMATION OF FEBUXOSTAT FROM STANDARD SOLUTION

Accuracy: To determine the accuracy of the proposed method, recovery studies were carried out by adding different amounts (80%, 100%, and 120%) of bulk samples of febuxostat within the linearity range were taken and added to the pre-analyzed formulation of concentration 5µg/ml.From that percentage recovery values were calculated. The results were shown in Table 3.

Precision: The precision of a method is defined as the closeness of agreement between independent test results obtained under optimum conditions. Three different concentrations of Febuxostat in the linear range (0.6, 3 and 12 µg/ml) were analyzed in 5 independent series in the same day (intra-day precision) and 3 consecutive days (inter-day precision). The precision of the analysis was determined by calculating the relative standard deviation (RSD %). The results are shown in Table 4 & 5.

Ruggedness: The ruggedness of the proposed method was evaluated by applying the developed procedures to assay of 10 μg/ml of febuxostat using the same instrument by two different analysts under the same optimized conditions at different days. The obtained results were found to reproducible, since there was no significant difference between analysts. Thus, the proposed methods could be considered rugged (Table 6).

Analysis of pharmaceutical formulations:The optimized spectrophotometric method was applied to the direct determination of Febuxostat in tablet using calibration curve method without any sample extraction or filtration. From the absorbance value, the drug content per tablet (on an average weight basis) was calculated. The results are shown in Table 7.

CONCLUSION: In this study a simple, fast and reliable UV spectrophotometric method was developed and validated for the determination of Febuxostat in bulk drug & pharmaceutical formulations. This method was applied directly to the analysis of pharmaceutical dosage forms without the need for separation such as extraction steps prior to the drug analysis. As this proposed method has the lowest LOD value and wider linear range is more sensitive method. From the results obtained, we concluded that the suggested method showed high sensitivity, accuracy and precision. Moreover, this method is simple and inexpensive and it can be employed for the routine quality control of Febuxostat in pharmaceutical formulations.