ABSTRACT: Armodafinil is an enantiopure of the wakefulness -promoting drug Modafinil, unique psycho stimulant recently approved by the US Food and Drug Administration for the treatment of narcolepsy; it is useful for treating excessive day time sleepiness. A simple, sensitive and accurate and economical spectrophotometric method has been developed for the estimation of Armodafinil in bulk and pharmaceutical dosage forms. This method is based on oxidative coupling reaction of 3-methyl-2-benzathiazoline hydrazone (MBTH) in the presence of ferric chloride (Fecl3).  An absorption maxima was found to be at 596nm with the solvent system methanol: water (3:97). The drug follows Beer-Lambert law in the range of 10- 50µg/ml with correlation coefficient of 0.999. The percentage recovery of Armodafinil in pharmaceutical dosage form is in between 96- 106. Results of the analysis were validated for accuracy, precision, LOD, LOQ and were found to be satisfactory. The proposed method is simple, rapid and suitable for the routine quality control analysis.

INTRODUCTION: Armodafinil (ARM), IUPAC name (–)-2-[(R)-(diphenylmethyl) sulfinyl] acetamide. It is soluble 1 in methanol, slightly1 soluble in water. It is an   enantiopure of the vigilance-promoting drug 2 or eugeroic, Modafinil (Provigil). It is useful for treating excessive day time sleepiness 3 associated with obstructive sleep apnea, narcolepsy, and shift work disorder 4 . It is not official in Indian and British pharmacopoeia, it was approved by US-FDA in 2007 5, 6. Till now there is only one UV Spectrophotometric methods is available. 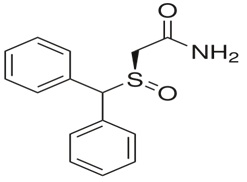 Standard stock solution of 1mg/ml of Armodafinil was prepared by dissolving in 3ml of methanol and the volume was made with distilled water after sonication for 10 min. The ARM stock solution was diluted with diluent to give working standard solutions containing 10, 20, 30, 40, 50µg/ml concentrations. These solutions were measured at 596 nm. The linearity was determined for ARM and calibration curve was constructed by plotting absorbance against the respective concentrations.

0.25g of MBTH was weighed and transferred into a 25ml volumetric flask, dissolved in 20ml water, sonicated for 10 min and volume was made up with distilled water.

0.5g of Fecl3 was weighed and transferred into 50ml volumetric flask, dissolved in 40ml water, sonicated for 10 min and volume was made up with distilled water.

The Visible Spectrophotometric method was validated in accordance with ICH guidelines.

Fresh aliquots were prepared from stock solution (100µg/ml) ranging from 10-50 µg/ml. The samples were measured in UV-Visible spectrophotometer using methanol and water as blank. It was found that the selected drug shows linearity between 10- 50µg/ml was reported in Table 1. Calibration curve was shown in Fig. 2.

Accuracy of the method confirmed by studying recovery at 3 different concentrations for 80, 100 and 120% in accordance with ICH guidelines, by replicate analysis. Standard drug solution was added to a pre analyzed sample solution and percentage drug content was measured. The results from study of accuracy were reported in Table 2. 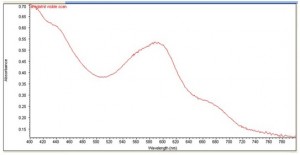 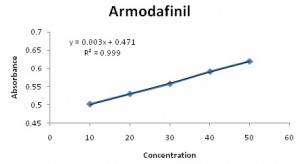 Precision (intra-day Precision) of the method was evaluated by carrying out the six independent test samples of Armodafinil. The intermediate precision (inter- day precision) of the method was also evaluated using two different analyst, and different days in the same laboratory. The percent relative standard deviation (% RSD) was found to be within the specified limits. The results from study of precision were reported in Table 3.

Robustness of the method was evaluated by carrying out the six replicate samples of Armodafinil at 596±2 nm. The relative standard deviation was found within the specified limits. The results were reported in Table 4.

For the analysis of the dosage form 20 tablets were weighed. Powder equivalent to 50 mg of ARM was taken into a 100ml volumetric flask. The formulation first dissolved in methanol (3ml) and sonicated for about 5-10 min. Finally the volume was made up with distilled water. The final concentration of the sample 30µg/ml was prepared and absorbance was measured against reagent blank at 596nm. The amount of Armodafinil was computed by using equation referring to the calibration curve. The result for assay was reported in Table 5.

RESULTS AND DISCUSSIONS: Armodafinil shown its λ max at 596 nm in the solvent (methanol: water- 3:97v/v) with a good correlation coefficient 0.999.

CONCLUSION: The low standard deviation, %RSD   and variation was in conformity with standards. Hence, it can be concluded that the developed Spectrophotometric method is accurate, precise and selective and can be employed successfully for the estimation of ARM in bulk and marketed formulation for routine quality control analysis.

ACKNOWLEDGEMENT: The authors are thankful to Nirmala College of pharmacy, mangalagiri, Guntur, Andhra Pradesh, India for providing necessary facilities to carry out the research work.