A STUDY COMPARING RESCUE MEDICATIONS: ARFORMOTEROL AND SALBUTAMOL NEBULIZATION IN EXACERBATION OF NON-SEVERE ASTHMA AT A TERTIARY CARE CENTER, NOT NEEDING HOSPITALIZATION

A STUDY COMPARING RESCUE MEDICATIONS: ARFORMOTEROL AND SALBUTAMOL NEBULIZATION IN EXACERBATION OF NON-SEVERE ASTHMA AT A TERTIARY CARE CENTER, NOT NEEDING HOSPITALIZATION

Objectives: Arformoterol is the (R, R) - enantiomer of formoterol, a short and long acting β-2 agonist bronchodilator and is distinguishable from the racemic (R, R/S,S) - diasteriomer of formoterol, which is most commonly used. Some in vitro data show significant bronchodilatation, inhibition of inflammation and marked baseline airway reversibility with arformoterol. Yet, there is a dearth of study literature demonstrating its role as immediate reliever medication, in patients with exacerbation of non-severe asthma. The aim of this study was to compare the efficacy and safety of arformoterol with salbutamol nebulisation therapy, as a rescue medication, in acute non-severe asthma, not requiring hospitalisation, at a tertiary care centre.

Methods: 40 patients, with exacerbation of non-severe asthma, were randomly allotted to Group A=20 and Group B=20. After every 30 minutes, 3 doses of salbutamol or arformoterol nebulization were given, respectively. Peak expiratory flow rates (PEFR) were measured at the baseline and 6 min, after each dose.

Results: In the demographic profile, there were comparable results, with no statistically significant difference between both the study groups, nebulized with salbutamol and arformoterol. The baseline PEFRs were also comparable, in both the study groups. There was significant increase in the mean PEFR, compared to the baseline, in both the groups. Final increase in PEFR, after the first, second and the third dose, was more in case of arformoterol, than that of salbutamol. There were negligible adverse effects, in both the groups.

Conclusion: Arformoterol was more effective, but equally safe, as compared to salbutamol, in exacerbation of non-severe asthma.

Arformoterol is the (R, R) - enantiomer of formoterol, a short and long acting β-2 agonist bronchodilator and is distinguishable from the most commonly used racemic (R, R/S, S) - diasteriomer of formoterol. In vitro data show significant bronchodilatation, inhibition of inflammation and marked baseline airway reversibility with Arformoterol 2.  There are few demonstrations of formoterol being more efficacious when compared to salbutamol; and both the therapies being well-tolerated 3, 4.

However, there is a dearth of study-literature demonstrating the role of arformoterol nebulization as an immediate reliever medication, in patients with exacerbation of non-severe asthma.

Objective: The aim of this study was to compare the efficacy and tolerability of arformoterol with salbutamol nebulization therapy, in acute non-severe asthma, not requiring hospitalization, at a tertiary care center.

MATERIALS AND METHODS: It was a double-blinded, prospective comparative study; expanding over three months, between July 2012 to September 2012. 40 patients from the Pulmonary Medicine out-patients department of a tertiary care centre, having exacerbation of non-severe asthma were chosen for conducting the study. The inclusion criteria were:

The exclusion criteria were:

(a)    Uncooperative and unconscious patients;

(b)   Patients presenting with acute severe or acute life-threatening or near-fatal asthma;

(c)    History of hypersensitivity to the study drugs;

(e)    Other associated medical illness having impact on study results;

After obtaining the clearance from the institutional ethical committee and informed consent, the following data were recorded: age, sex, duration of symptoms of asthma, present medications, pulse rate, respiratory rate and SaO2. Thorough systemic examination was done. Using a peak flow meter (Breath-O-Meter, Cipla Ltd., Mumbai, India), the baseline peak expiratory flow rate (PEFR) was measured. Patients were then randomly allocated to Group A (salbutamol therapy) = 20 and Group B (arformoterol therapy) = 20. Peak expiratory flow rates (PEFR) were measured at the baseline and 6 min, after each dose. To Group- A patients, 3 doses of nebulization were given with 5-mg salbutamol respules (totally 15 mg), through oxygen driven (6 L/min) nebulizer after every 30minutes. To Group – B patients, 3 doses of nebulization were given with 15µg arformoterol respules (totally 45 μg), with the same nebulizer, after every 30 minutes.

Systemic corticosteroid was added to the nebulization, after the third dose of the drug was administered, to eliminate the impact of other drugs on the treatment outcome. 6 minutes after administering each dose of the bronchodilators, PEFR was measured. Best of the three PEFR measurements was recorded, at each recording. After the third dose, patients were followed up for a period of 10 hours, for any adverse effects occurring.

In both the groups, the mean PEFR and the differences in mean PEFR were statistically analyzed by ‘Unpaired t-test’. To evaluate the significant improvement in either group, one-sample test was used to compare the PEFR before and after each dose of the drug.

TABLE 1: THE DEMOGRAPHIC PROFILE AND BASELINE PEFR OF THE PATIENTS

Baseline characteristics of the patients (n = 40) onGroup – A (salbutamol therapy) and Group – B (arformoterol therapy). The table shows that the demographic profile and the baseline PEFR in both the groups were comparable.

TABLE 2: THE COMPARISON OF IMPROVEMENT FOLLOWING NEBULISATION WITH SALBUTAMOL AND ARFORMOTEROL

In both the groups, PEFR showed significant increase compared to the baseline values and there was increase after each dose of the drug. The increases in PEFR after the first, second and the third dose were significantly more with arformoterol than with that of salbutamol. 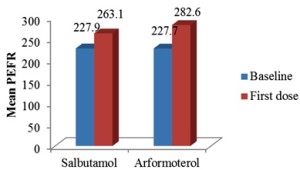 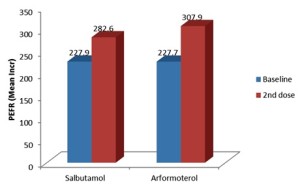 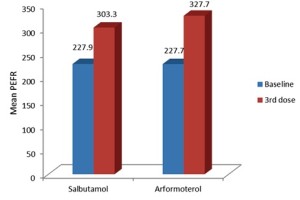 TABLE 3: THE ADVERSE EFFECTS AND THEIR FREQUENCY

The adverse effect profile of Group – A (salbutamol therapy) and Group – B (arformoterol therapy) in exacerbation of non-severe asthma.

Tolerability was good for both the drugs. Adverse effects were negligible in either group.

DISCUSSION: In the global public health scenario, asthma still holds a significant place, quite vehemently 1. As depicted in Table 1, our study has shown amply comparable results, with no statistically significant difference between both the study groups, nebulized with salbutamol and arformoterol, in the demographic profile and the clinical criteria. It was observed that there was an overall increase in the prevalence of the exacerbations of non-severe asthma, among the women, compared to men, with increasing age.

Among the patients in both the study-groups with non-severe asthma, the average duration of symptoms was found to be long. In case of either group, there was a visible increase in the pulse rates and respiratory rates; but oxygen saturation was almost within the normal range. The baseline PEFRs were also comparable, in both the study groups, nebulized with salbutamol and arformoterol.

Usefulness of long-acting beta-2 agonists such as salmeterol and formoterol as rescue medication in exacerbations of asthma was recently recognized 6. As depicted in Table 2 and Figures 1, 2 and 3, in case of both the groups in our study, PEFR showed significant increase compared to the baseline values and there was significant increase after each dose of the drugs given. The increases in PEFR after the first, second and the third doses were significantly more with arformoterol nebulization than with that of salbutamol.

Hence, nebulization with arformoterol was observed to be more efficacious than with that of salbutamol, as a rescue medication, in exacerbation of non-severe asthma. As a starter bronchodilator in acute asthma, short-acting β2 agonists, such as salbutamol, are considered better, for their rapid onset of action. But, these have to be frequently administered, due to their short duration of action, which often causes inconvenience among the patients 7. As a clinically favorable bronchodilator, formoterol have both a rapid onset and long duration of action, with a well-charted safety and tolerability profile 8.  So it can ideally be used as an alternative to short-acting β2 agonists in the management of exacerbations of acute asthma as it causes rapid bronchodilatation, while reducing the need for frequent administration.

Being hydrophilic drugs, salbutamol has an ability to reach the β2 receptor from the aqueous phase, thus showing rapid onset of action while, formoterol is much more lipophilic than salbutamol.

The aqueous part rapidly activates the β2 receptor, whereas the lipophilic part is taken up into the cell membrane from which it diffuses slowly and thus stimulates β2 receptor over a prolonged period. This action results in rapid onset along with a long duration of action of formoterol, just as demonstrated in the study 9, 10, 11.

Just as salbutamol, onset of action of formoterol is 1–3 min; and after 5-10 min of inhalation, 80–90% of the brochodilatation occurs; duration of action being 12 hours 8.  The other effects of formoterol on the airway, apart from bronchodilatation, are the inhibition of plasma leakage in the airways through the beta-2 receptor on the endothelial cells of post-capillary venules 1, 12 and sputum α-2 macro-globulin 1, 13; and the inhibition of mediator release by mast cells, which is an important benefit in the treatment of asthma 1, 14, 15.

Neutrophils are the key inflammatory cells in COPD 1. Beta-2-adrenoceptors are expressed on human neutrophils and beta-2-agonists inhibit the release of reactive oxygen species 1, 16. Some studies have also shown that LABAs (long acting beta agonists) decrease bronchial neutrophils 1, 17, 18. The efficacy of long-acting beta-2 agonists, such as salmeterol and formoterol, in the maintenance therapy of chronic stable asthma (when used along with an inhaled corticosteroid) and also in acute non-severe asthma, acute severe asthma, exercise induced bronchospasm, childhood asthma and COPD are well-documented 3, 6, 8, 19.

Most studies show the use of formoterol with terbuhaler, aerolizer, or metered dose inhaler. But, there are very less studies showing the use of formoterol in the form of nebulization 8. Arformoterol can be used in patients who are unable or unwilling to use a dry powder inhalation (DPI) or metered dose inhaler (MDI) preparation. Other uses of arformoterol nebulized medication are seen in patients who have repeated episodes of airflow obstruction despite DPI / MDI use and in patients with severe lung function compromise 20.

In some of the short and long term clinical trials, the efficacy of inhaled formoterol has been equal to or greater than that of salbutamol, fenoterol and terbutaline 9. Recent studies have shown that when inhaled formoterol 12 or 24 µg twice daily was added to the existing inhaled corticosteroid, it improved lung function and reduced asthma symptoms, compared to placebo. Formoterol has got significant therapeutic advantages over shorter-acting beta 2-agonists in the treatment of nocturnal and exercise-induced asthma, as it reduces the need for reliever medication, due to its longer duration of action.

When administered 3 and 12 hours before exercise, formoterol conferred more protection than salbutamol. Formoterol is currently recommended for use as an alternative medication to increasing inhaled steroid dosage, in patients whose asthmatic symptoms are inadequately controlled despite therapy, with low to moderate doses of inhaled steroids and intermittent short-acting beta 2-agonists 21.

As depicted in Table 3, oral irritation was found to be a common adverse effect of arformoterol, while with salbutamol - headache, palpitation, oral irritation and tremors were seen, in our study; although there was no statistically significant difference in the adverse effects, between the two study groups, and these were found to be mild and very few. Hence, arformoterol nebulization was observed to be as safe as salbutamol nebulization, in the rescue therapy of the exacerbation of non-severe asthma.

Evidence of safety of formoterol is also available in the study-literature, even at high doses in patients with asthma and COPD 22. As there are significantly fewer clinical data available on the use of arformoterol, the safety of this nebulized drug has not been as clearly established as that of racemic formoterol. In a study, dryness of mouth was the commonly reported side effect of formoterol inhalation 19.

Few clinical trials exhibit good tolerability of arformoterol 23, 24.  A study on the use of racemic formoterol and arformoterol in asthma found that both the drugs were well tolerated 25.

CONCLUSION: Arformoterol was more effective, but equally safe, as compared to salbutamol, in the therapy of the exacerbation of non-severe asthma.