Categories Menu
Home » A STUDY OF ANTIMICROBIAL PRESCRIPTION PATTERN IN THE EAR, NOSE AND THROAT INFECTIONS AT A TERTIARY CARE TEACHING HOSPITAL, RAJKOT

A STUDY OF ANTIMICROBIAL PRESCRIPTION PATTERN IN THE EAR, NOSE AND THROAT INFECTIONS AT A TERTIARY CARE TEACHING HOSPITAL, RAJKOT

A STUDY OF ANTIMICROBIAL PRESCRIPTION PATTERN IN THE EAR, NOSE AND THROAT INFECTIONS AT A TERTIARY CARE TEACHING HOSPITAL, RAJKOT

ABSTRACT: Introduction: The ear, nose and throat (ENT) infections can be caused by a variety of microorganisms such as bacteria, fungi and viruses. Their treatment involves the use of appropriate antimicrobial agents and inappropriate use is closely linked to antibiotic resistance. Hence, present study was planned to evaluate the prescribing pattern of antimicrobials in the ENT outpatient department of a tertiary care teaching hospital. Materials and Methods: A cross-sectional, observational study was conducted from May 2016 to August 2016. Prescriptions of patients diagnosed with ENT infections were included. The information such as age, sex, type of ENT infections and drug data were noted in preformed case record form and evaluated. Results: Over 3 month study period, 512 prescriptions were analysed. Majority of the study population were in the age group of 21-40 years. Total numbers of males were 274 and females were 238. Among all, most common ear infection was chronic suppurative otitis media (17.19%). The commonest antimicrobial prescribed was Ciprofloxacin (29.18%) followed by Amoxicillin (25.38%). Only one antimicrobial was prescribed in 341 (66.60%) prescriptions. Average number of drugs and antimicrobials per prescription were 4.58 and 1.80 respectively. The preferred route of administration of antimicrobials was oral (73%) and most of them were prescribed by generic name (78.45%). Conclusion: Fluoroquinolone and β-lactam were the two most frequently prescribed antimicrobial agents. The use of the generic name was found to be satisfactory, but the average number of drug per prescription was high.

INTRODUCTION: Upper respiratory tract infections (URTIs) including nasopharyngitis, pharyngitis, tonsillitis and otitis media were 4th major cause of mortality which is responsible for global number of deaths and on the other hand it also generated that 94.6 disability adjusted life years lost worldwide 1.

The ear, nose, and throat (ENT) infections can be caused by a variety of microorganisms like bacteria, fungi and viruses. It affects all age groups, from children to adults. ENT infections often have serious consequences such as hearing impairment and emotional strain which however, seems to lower the patient’s quality of life 2.

Antibiotics have played major role in treating ENT infections over the years however, their inappropriate use is closely linked to antibiotic resistance 3. Antimicrobial prescription patterns differ from country to country or even from region to region, which is attributable to various factors such as the infecting organisms and antimicrobial susceptibility, physician preference and costs 4. Hence, the present study was aimed to evaluate the prescribing pattern of antimicrobials in ENT infections.

MATERIALS AND METHODS: A cross-sectional and observational study was carried out over a period of three months from May 2016 to August 2016 in ENT outpatient department (OPD) of a tertiary care teaching hospital, Rajkot. The institutional ethics committee permission was taken to conduct this study. Institutional Ethical Committee (IEC) approval number is PDUMCR/ IEC/6689/2016.

Prescriptions of patients diagnosed with ENT infections were included in the study. The information such as age, sex, type of ENT infections and drug data was noted from physician prescribing records in preformed case record form. Data entry was done in Microsoft office excel 2013 and appropriate statistical analysis was done. 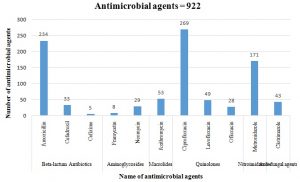 The average duration of antimicrobial therapy was 6 days and the preferred route of administration was oral (73%) followed by topical (26%) and intravenous (1%). WHO core indicators for prescription is described in Table 4.

TABLE 4: WHO CORE INDICATORS FOR PRESCRIPTION

DISCUSSION: Demographic characteristics showed that percentage of males suffering from ENT infections were more than females. Similar finding was observed in studies done by Ziaie T et al., (2015) and Khan et al., (2011) 5, 6. It may be because the males are more ambulatory and have more occupational exposure. Majority of the patients were in the age group of 21-40 years and the lowest percentage was in the geriatric group. It indicates that ENT infections are more prevalent in young adults in our study as well as in the other studies done by Pallavi et al., (2016) and Ziaie T et al., (2015)  4, 5.

In our study, the most common ear infection was CSOM (17.19%) which is in accordance with other study conducted by Ziae et al., (50.4%) and Yadav et al., (50.8%) 5, 7. Tonsillitis (10.55%) followed by pharyngitis (8.40%) were the throat infections observed which is similar to study done by Ziae et al. 5 Rhinitis (9.77%) was the most common nasal infection, as it is one of the most common allergic disease worldwide, affecting 10-25% of population 8. Most commonly prescribed classes of anti-microbials were Fluoroquinolone, followed by β-lactam and nitroimidazole. Among the individual antimicrobial drugs, maximum patients received Ciprofloxacin followed by Amoxicillin. Similar prescribing behavior was observed in studies done by A. Anandhasayanam (2016) in Tamilnadu, Y. Pamila (2010) in Maharashtra 9, 7. In our study, laboratory investigations were not done. Hence, antimicrobial therapy was empirical and based on clinical judgement. In the present study, 66.60% prescriptions had one antimicrobial agent and 24.81% prescriptions had two antimicrobial agent. Padwal et al., also documented that single anti-microbial agent being prescribed in majority (92.98%) of patients followed by two anti-microbials (2.10%).10

In our study, patients having fungal infection were prescribed topical broad spectrum antifungal agent along with oral antibacterial agents which is not justified because it can cause drug-drug interactions and adverse drug reactions. The average number of antimicrobial agents prescribed per prescription was 1.80 which is higher than that reported in previous studies done by Pallavi et al., (0.82), Padwal et al., (0.98), and Ain et al., (1.58) 5, 10, 11. Apart from antimicrobial agents, NSAIDs, H1 antihistaminics, H2 blocker, steroid and vitamin were prescribed concomitantly for symptomatic relief. So, the average number of drugs per encounter was 4.58 which is more than the WHO recommendation (<3/ prescription) indicating a trend of polypharmacy 12. Polypharmacy is known to cause unnecessary adverse reactions, drug interactions, complications, medication non-adherence and increase cost of therapy 10. Fixed dose combination of antimicrobial agents was not prescribed in our study.

CONCLUSION: Fluoroquinolone and β-lactam were the two most frequently prescribed antimicrobial agents which are included in essential drug list. The use of the generic names was found to be satisfactory, but the average number of drug per prescription was high. This outcome is an important tool to guide hospitals and doctors to develop antibiotic policy that helps to decrease chance of antimicrobial resistance and motivate cost effective utilization of antimicrobial agents.

ACKNOWLEDGEMENT: Principal investigator of the study would like to thank Dr. Ajita Pillai, Associate Professor, Department of Pharmacology, Rajkot, Gujarat for their valuable guidance and support.

CONFLICT OF INTEREST: No any conflict of interest