A STUDY OF CARDIOVASCULAR AND ANTIMICROBIAL EFFECTS OF TINOSPORA CORDIFOLIA

A STUDY OF CARDIOVASCULAR AND ANTIMICROBIAL EFFECTS OF TINOSPORA CORDIFOLIA

pharmaceutical products1.Plants are recognized for their ability to produce a wealth of secondary metabolites and mankind has used many species for centuries to treat variety of diseases 2.

Tinospora  cordifolia which is commonly known as Gudichi is a large glabrous, deciduous climbing shrub belonging to family Menispermaceae 3. It has been reported to possess antiallergic, anti-inflammatory, antioxidant 4, immunomodulatory, hepatoprotective, antipyretic 5, antidiabetic 6 and anti hyperlipedemic properties 7.It has been reported to be useful in urinary diseases, syphilis, skin diseases, bronchitis 8, and allergic rhinitis 9 and known to promote longetivity and increased body resistance against various diseases 10. It has been traditionally used as antispasmodic and antidiarrhoeal agent 11.

cordifolia were collected from the botanical garden of our college.

Procurement of bacterial strain: Pure cultures of test organism Pseudomonas aeruginosa (ATCC 2668) were purchased from MTCC, Chandigarh. Viability of the culture was maintained on nutrient agar by periodic transfers.

Preparation of Aqueous extract: Fresh stem and leaves of Tinospora cordifolia were shed dried at room temperature and powdered mechanically.

The powder (100gm) was allowed to soak for 3days in 1000ml of distilled water with normal regular stirring. The suspension was filtered using Whatmann no. 1 filter paper and the resulting solution was concentrated on water bath. The concentrated solution was dried under normal tube light. Completely dried extract was collected by scraping with spatula, and then stored in cool and dry place. The extract was dissolved in distilled water to obtain appropriate concentration of 0.1mg/ml, 0.2mg/ml, 0.5mg/ml and 1mg/ml.

Preparation of Ethanolic extract: 100gm of powder was soaked in ethanol (50%) for  48 hr and the solution was then dried at 40oC in oven for 36hr. The dried extract was dissolved in distilled water to make 0.1mg/ ml, 0.2mg/ml, 0.5mg/ml and 1mg/ml concentration solution.

Isolated perfused frog heart preparation: The frog of species Rana tigrina was pithed and pinned it to the frog board. A midline incision was given on the abdomen, the pectoral girdle was removed and the heart was exposed. The pericardium was carefully removed and put a few drops of frog ringer over the heart. The inferior venacava was traced, a thread was placed around it and  a small cut was given in order to insert the venous cannula.The cannula was inserted in the vein and thread was tied to assure the cannula in place which is in turn connected to a saline bottle containing frog ringer solution.

A small cut in one of the aorta was given for the ringer to come out. Heart was isolated and attached to the stand with moderate flow of ringer. A thin pin hook was passed through the tip off the ventricle and with the help of a fine thread attached to the hook it was tied to the free limb of Sterling’s heart lever which was fixed to stand. A proper tension was adjusted by altering the height of the lever. The normal heart rate was noted 12, 13.The effect of various doses of ethonolic and aqueous extracts of Tinospora cordifolia were recorded before as well as after atropine. The effect of Tinospora cordifolia was studied for heart rate and myocardial force of contraction.

Agar diffusion assay: Anti microbial screening was done using agar well diffusion methods. For this 25ml of sterile nutrient agar was poured in sterile autoclaved petri plates. Before pouring, 100 µl of activated culture of bacteria was added and then allowed to solidify completely. The wells were prepared with the help of sterile 10mm diameter cork-borer.

The 100µl of plant extract from stock solution were poured into the wells. The plates were sealed with plasticine and transferred to refrigerator to diffuse out for 30mins. The plates were then incubated in the incubator at 37oC for 24hrs. Triplicate plates were prepared for each treatment and the average zone of inhibition excluding well, were recorded 14.

Maximum antimicrobial activity was found with 1mg/ml of ethanolic extract of Tinospora cordifolia (15mm) against Pseudomonas aeruginosa. The organism showed resistance to aqueous extract giving an inhibition zone of 0.3mm (Table 3). This could be because of phospholipids membrane in addition to inner peptidoglycan layer, which makes the cell more impermeable for exogenous molecules (Fig.1).When antibiotic susceptibility test was conducted for Streptomycin it was found to be susceptible showing an inhibition of 17mm (Fig. 1). 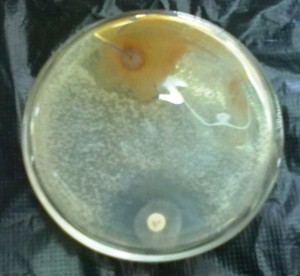 FIG. 1: COMPARISON OF ANTIMICROBIAL ACTIVITY OF ETHANOLIC EXTRACT OF TINOSPORA CORDIFOLIA AND STREPTOMYCIN

CONCLUSION: The extract of Tinospora cordifolia posses antibacterial and negative chronotropic and ionotropic effects. Like the known parasympatho-mimetic drugs these drugs may be useful in cardiovascular disorders like arrhythmia. The biochemical role of the aqueous and ethanolic extracts can be investigated in future in animals like mice and rats which may explore their cholinomimetic or anticholinesterase activity in brain and neuromuscular junction and can have potential benefit in the treatment of  Alzheimer’s disease and Myasthenia gravis. These findings  would pave way for evolution more drugs.

ACKNOWLEDGEMENTS: The authors wish to acknowledge the technical assistance offered by the management of R.B.V.R.R. College of Pharmacy, Hyderabad