Categories Menu
Home » A STUDY OF METHOD DEVELOPMENT, VALIDATION AND FORCED DEGRADATION FOR SIMULTANEOUS QUANTIFICATION OF POVIDONE IODINE AND ORNIDAZOLE IN BULK AND PHARMACEUTICAL DOSAGE FORM BY USING RP-HPLC

A STUDY OF METHOD DEVELOPMENT, VALIDATION AND FORCED DEGRADATION FOR SIMULTANEOUS QUANTIFICATION OF POVIDONE IODINE AND ORNIDAZOLE IN BULK AND PHARMACEUTICAL DOSAGE FORM BY USING RP-HPLC

A STUDY OF METHOD DEVELOPMENT, VALIDATION AND FORCED DEGRADATION FOR SIMULTANEOUS QUANTIFICATION OF POVIDONE IODINE AND ORNIDAZOLE IN BULK AND PHARMACEUTICAL DOSAGE FORM BY USING RP-HPLC

ABSTRACT: An accurate, rapid economical, and simple, reliable assay method was developed and validated for the simultaneous estimation of Povidone-iodine and Ornidazole using RP-HPLC. In the proposed method, the efficient chromatographic separation was achieved using waters X-Bridge C8 column (150 × 2.1mm, 3.5µ) as a stationary phase and acetonitrile: 0.1% Orthophosphoric acid (50:50 v/v) as a mobile phase with a flow rate of 1 ml/min and UV detection was carried at 320nm. Chromatography was carried out isocratically at ambient temperature and the run time was 8 min. System suitability parameters were studied by injecting the standard six times, and results were well under the acceptance criteria. Linearity study was carried out between 10-150% levels, R2 value was found to be as 0.999. The precision of intermediate precision and method precision was found to be within the acceptable limit. By using the above method, assay of the marketed formulation was carried out and found to be within the limit. All the validation parameters as per ICH guidelines. Degradation studies of Povidone-iodine and Ornidazole were done; in all conditions purity threshold was more than purity angle and within the acceptable range.

INTRODUCTION: Povidone-iodine, also known as iodopovidone, is an antiseptic 1 used for skin disinfection 2 before and after surgery 3, 4. It may be used both to disinfect the hands of healthcare provides and the skin of the person they are caring for. It may also be used for minor wounds 5, 6. It may be applied to the skin as a liquid or a powder. Side effects include skin irritation 7. If used on large wounds, kidney problems 8, 9, high blood sodium, and metabolic acidosis 10, 11 may occur. It is not recommended in people who are less than 32 weeks pregnant or are taking lithium.

Frequent use is not recommended in people with thyroid problems 12. Povidone-iodine is a chemical complex of povidone, hydrogen iodide, and elemental iodine. It contains from 9% to 12% available iodine. It works by releasing iodine which results in the death of a range of microorganisms. Povidone-iodine came into commercial use in 1955.

It is on the World Health Organization’s 13, 14 list of essential medicines 15, 16, the safest and most effective medicines needed in a health system 17 povidone-iodine is available over the counter. It is sold under a number of brand names, including betadine.

Ornidazole is an antibiotic used to treat protozoan infections 18. A synthetic nitroimidazole 19, 20, it is commercially obtained from an acid-catalyzed reaction between 2-methyl-5-nitroimidazole and epichlorohydrin. Antimicrobial spectrum 21 is similar to that of metronidazole 22 and is more well-tolerated; however, there are concerns of lower relative efficacy 23. It was first introduced for treating trichomoniasis 24 before being recognized for its broad anti-protozoan, and anti-anaerobic-bacterial capacities 25 has also been investigated for use in crohn’s disease after bowel resection 26.

Preparation of Buffer: 1ml of Orthophosphoric acid is dissolved in 1lt of HPLC grade water and filter through 0.45µ filter paper.

Preparation of Mobile phase: Take buffer and acetonitrile in the ratio of 50:50 v/v mixed thoroughly, sonicated for 5min and filtered through 0.22µm membrane filter and used as mobile phase. The HPLC analysis was performed on a reversed-phase HPLC system with isocratic elution mode using a mobile phase of Acetonitrile and 0.1% OPA (50:50) on waters X-Bridge C8 column (150x2.1mm, 3.5µ) with 1ml/min flow rate at 320nm using PDA detector.

Preparation of Standard Solution (Povidone Iodine 50µg/ml and Ornidazole 10µg/ml): Accurately weigh and transfer 50mg of Povidone-iodine and 10mg of Ornidazole working standard into 100ml volumetric flask and add app. 70ml of diluent, sonicate to dissolve it for 30min. and made upto the mark with diluent. This is used as a stock solution.

Take 5ml of the stock solution and transferred it into 50ml volumetric flask and made up to the mark with diluent.

Preparation of Sample Solution: Accurately weigh and transfer weight equivalent to 50mg of povidone-iodine and 10mg of Ornidazole sample into 100ml volumetric flask and add 70ml of diluent. Sonicated to dissolve and diluted up to the mark with diluent. Then, 5ml of the above solution was diluted to the 50ml and filtered through a 0.45µ nylon syringe filter.

Optimization of Chromatographic Conditions: Various combination of mobile phase was screened with respect to resolution, theoretical plate count, tailing, and other system suitability parameters. Finally, the separation was performed with a freshly prepared mobile phase consists of buffer: acetonitrile in the ratio of 50:50 with a flow rate of 1.0ml/min. 320nm wavelength, injection volume of 10µl, and ambient temperature were maintained during the entire process to obtain a symmetric peak of Povidone-iodine and Ornidazole.

Validation Procedure: The analytical method was validated as per ICH Q2 (R1) guidelines for the parameters like system suitability, specificity, accuracy, precision, linearity, robustness, the limit of detection (LOD), the limit of quantification (LOQ), forced degradation and stability.

System Suitability: System suitability parameters were measured to verify the system performance. The parameters, including USP plate count, USP tailing, and % RSD, are calculated and found to be within limits.

Specificity: Specificity is the ability to assess the analyte unequivocally in the presence of other components (impurities, degrades, or excipients), which may be expected to be present in the sample and standard solution. It was checked by examining the chromatograms of blank samples and samples spiked with povidone-iodine and ornidazole.

Accuracy: Accuracy is the closeness of the test results obtained by the method to the true value. It was assessed by the recovery studies at three different concentration levels. In each level, a minimum of three injections was given, and the amount of the drug present, percentage recovery and related standard deviation were calculated.

Precision: Precision of the analytical method is the degree of agreement among individual test results. It was studied by analysis of multiple sampling of a homogeneous sample. The precision of the present method was assessed in terms of repeatability, intra-day, and inter-day variations. It was checked by analyzing the samples at different time intervals of the same day as well as on different days.

Linearity: The linearity of an analytical method is its ability to obtain results directly proportional to the concentration of the analyte in the sample within a definite range. The six series of standard solutions were selected for assessing the linearity range. The calibration curve was plotted using peak area versus concentration of the standard solution, and the regression equations were calculated. The least-squares method was used to calculate the slope, intercept, and correlation coefficient.

Robustness: The robustness of an analytical procedure is a measure of its ability to remain unaffected by small but deliberate variations in method parameters and provides an indication of its reliability during normal usage. Robustness study was performed by injecting standard solutions into the HPLC system and altered chromatographic conditions such as flow rate (±0.2 ml/min) and organic content in the mobile phase (±10%). The separation factor, retention time, and peak asymmetry were calculated by determining the effect of the modified parameters.

RESULTS AND DISCUSSION: The current study was designed to develop a simple, precise and rapid analytical RP-HPLC method, which can be used for the analysis of assay method for simultaneous estimation of Povidone-iodine and Ornidazole in the bulk and pharmaceutical dosage form. The chromatographic conditions were optimized in order to provide a good performance of the assay. To optimize mobile phase, various combinations were tried for Povidone-iodine and Ornidazole. The final working mobile phase is 0.1% OPA and acetonitrile in composition of 40:60 v/v. Mobile phase for each drug was selected based on its polarity. Detection was carried out in several wavelengths in order to obtain enough sensitivity for the two APIs in a smaller proportion (Povidone-iodine and Ornidazole). At last, the wavelength 320nm, at which the two drugs showed good absorbance, was selected as a detection wavelength. The flow rate was 1.0ml/min, which is critical as it affects the peak symmetry parameters. The retention time for Povidone-iodine and Ornidazole were 2.936 min and 4.535 min, respectively. The proposed method is validated in accordance with the ICH guidelines, with all of the results within limits. 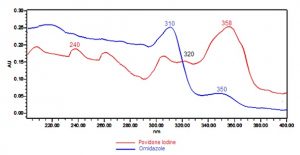 Specificity: There was no interference from blank at the retention time of Povidone-iodine and Ornidazole. Hence the method is specific. 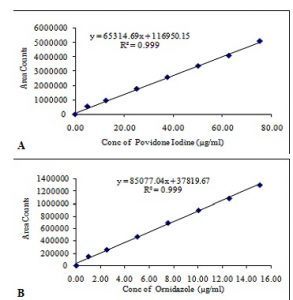 FIG. 6: CALIBRATION CURVE OF (A) POVIDONE IODINE (B) ORNIDAZOLE

Precision: The precision of this method was assessed in terms of intraday (repeatability) and (intermediate precision) variations. The intraday studies were determined by performing six repeated analyses of the sample solution of Povidone-iodine and Ornidazole on the same day under the same experimental conditions. The intermediate precision of the method was carried out in the same laboratory by studying the analysis with different analysts and different instruments. The method is highly precise as %RSD values were found to be <2%. Good recoveries (98-102%) of the drug were obtained at each added concentration, indicating that the method was accurate. The results and chromatograms were furnished below.

Accuracy: The accuracy of the method was performed by calculating the recovery experiments at three levels (50%, 100%, and 150%). APIs with concentrations 25, 50, and 75 µg/ml of Povidone-iodine, 5, 10, and 15µg/ml of Ornidazole were prepared. The test solution was injected three times for each spike level, and the assay was performed as per the test method.

The recovery results were close to 100%, and also, the RSD values were less than ±2%. The percentage recovery, mean, and relative standard deviation were calculated. Recovery values demonstrated that the method was accurate within the desired range. The results are summarized below.

Robustness: The robustness of the chromatographic method was determined by varying flow rate and mobile phase composition. % RSD was found to be within the acceptable limit. Robustness results were tabulated in Table 7.

Forced Degradation: The proposed method can be used for release and stability studies for effective evaluations and can be considered as a stability indicating method. The forced degradation study was carried out according to the ICH requirements include acid (1N HCl), base (1N NaOH), 10% Hydrogen peroxide, reduction, thermal and photolytic degradation. From the chromatograms, it is evident that the selected drugs were stable under the applied stress conditions though the degraded peaks were observed. Results were shown in table.

CONCLUSION: In this study, a novel, rapid, economical, sensitive, and easily available HPLC method was developed for the simultaneous determination of Povidone Iodine and Ornidazole in the bulk and pharmaceutical dosage form. The main advantage of this method is no HPLC methods are reported. In this method, shorter run time, low price, accessibility, sensitivity, reliability, and reproducibility. These properties are important when a large number of samples are to be analyzed. The validation of all the parameters like linearity, accuracy, specificity, robustness was done and found to be within the acceptance criteria. The RSD values for all parameters were found to be less than 2, which indicates the validity of the method, and results obtained by this method are in fair agreement.

So the proposed method could be easily applied for the routine analysis and pharmaceutical formulations of Povidone Iodine and Ornidazole in quality control laboratories without any preliminary separation.

ACKNOWLEDGEMENT: I thankful to my faculty lecturers for supporting and encouragement to complete this research work.