Categories Menu
Home » A STUDY OF PREGABALIN, TRAMADOL, THEIR COMBINATION AND NIGELLA SATIVA IN NEUROPATHIC PAIN IN RATS

A STUDY OF PREGABALIN, TRAMADOL, THEIR COMBINATION AND NIGELLA SATIVA IN NEUROPATHIC PAIN IN RATS

A STUDY OF PREGABALIN, TRAMADOL, THEIR COMBINATION AND NIGELLA SATIVA IN NEUROPATHIC PAIN IN RATS

ABSTRACT: Nigella sativa (NS) is a commonly used herb in Asian and African countries. Extensive experimental studies have been done to shed light on its hepatoprotective, immunumodulator, antioxidant, antimicrobial and several other useful pharmacological properties. However, there is dearth of evidence to evaluate the effect of Nigella sativa extract in neuropathic pain. In this study we have used neuropathic pain model of Wistar rats using intraperitoneal cisplatin injection twice weekly for 4.5 weeks. Animals were divided into six groups of six rats each. Ethanolic extract of Nigella sativa, pregabalin, tramadol or combination of pregabalin and tramadol were given orally in Wistar rats in which neuropathy had been induced by cisplatin i.p. injections for 4.5 weeks. Single dose of drugs were given and pain assessment was done by soft touch, crude touch, Eddy’s hotplate and tail flick analgesiometer at 0, 30, 60, 90, 120 and 240 minutes. Nigella sativa showed significant analgesic effect on cisplatin induced neuropathic pain in all the experiments however pregabalin and tramadol showed better efficacy

INTRODUCTION: Pain is the most common reason for physician consultation worldwide. Little less than 30% of the patients, who were treated at a primary care practice, had some kind of medically defined pain problem, requiring the attention of a general physician.

Pain is usually the natural consequence of tissue injury. Pain motivates the individual to withdraw from damaging situations, to protect a damaged body part while it heals, and to avoid similar experiences in the future.

There are 3 functions of pain

(ii) Teach us what not to do

Two general types of pain based on its time course viz. acute pain and chronic pain. Acute pain is typically defined as a pain response due to tissue damage that lasts less than 6 months. Chronic pain lasts more than 6 months and can be recurrent, progressive, or constant.

The International Association for Study of Pain (IASP) defines pain as: “The unpleasant sensory and emotional experience of actual or potential tissue damage or an experience expressed in such terms” 1. It can last from a few seconds to many weeks but it usually goes away when normal healing occurs. Acute pain is self-limiting and serves a protective biological function by acting as a warning of on-going tissue damage. Associated psychological symptoms are minimal and are usually limited to mild anxiety.

Neuropathic pain is often difficult to treat, because it is resistant to many medications and adverse effects associated with effective medications.

Among the promising medicinal plants, Nigella sativa, also known as Black seeds and Black cumin, has been called the “Blessed Seed” for its miraculous curing ability. The results of extensive pharmacological studies justify the broad, traditional therapeutic value of Black Seeds. These studies found Black Seed to have analgesic, antilipemic, post coital contraceptive, diuretic and antihypertensive, bronchodilator and calcium antagonist, histamine release inhibitor, hepatoprotective, antihelminthic, antifungal, antimicrobial (against a wide range of organisms),  and anticancer activities7. Its many uses have earned Nigella the Arabic approbation 'Habbatul barakah', meaning the seed of blessing.

Nigella sativa (NS) is a commonly used household herb, vernacularly known as Kalaunji. Extensive experimental studies have been done to shed light on its hepatoprotective potency, as an immunumodulator, antioxidant, antimicrobial agent 8, 9, 10. Nigella sativa and its active constituent thymoquinone (TQ) have shown protective effect against diabetic peripheral neuropathy due to oxidative stress11. Histologic evaluation of the tissues in diabetic animals treated with TQ and especially NS showed fewer morphologic alterations. Myelin breakdown decreased significantly after treatment with NS and TQ.

Pregabalin effectively relieved neuropathic pain and prevented the conversion of acute pain to chronic pain14. Pregabalin is commonly used in the treatment of diabetic peripheral neuropathy, though it may reduce pain, but may not reduce the oxidative stress. Pregabalin improves sleep, quality of life, and daily living abilities. Along with its efficacy in particular neuropathic pain conditions, pregabalin’s safety led it to be one of the first pharmacotherapies considered for the management of neuropathic pain15.

Adverse effects associated with pregabalin (like dizziness, depression, loss of appetite, decrease or change in vision etc.) limits its use in neuropathic pain syndrome. Thus we need to discover new medications with similar or better efficacy but less adverse effects.

The acute analgesic effect of tramadol has been extensively investigated. Opioids and tramadol are only considered second/third line, alone or in combination with first line drugs (National Institute for Health and Clinical Excellence, UK.NICE clinical guideline 173, 2013).

To the best of our knowledge there is no study to show whether pregabalin, tramadol or their combination is better for the treatment of neuropathic pain.

Seeds of Nigella sativa were thoroughly washed in distilled water and dried in shade. The seeds were grounded to powder with the help of mortar and pestle, 500 g of powder was soaked in 1.5 litre of 99% ethanol (analytical grade) in a closed container at room temperature for 7 days with periodic stirring with a sterile glass rod. After 7 days it was filtered with the help of Whatman’s filter paper no.1 and the filtrate transferred in a petri dish and left in shade for 3 days to allow evaporation of ethanol. The extract so obtained was brown in colour and had a characteristic smell. It was then weighed in electronic weighing balance and was 50 g in weight (10% w/w). The extract was transferred in sterile tubes and was stored at 40C for further use.

Drugs and chemicals: Doses were according to previous studies.

Adult male Wistar rats (weighing 100-150gm) obtained from CDRI (The Central Drug Research Institute) were used. The animals were housed in polycarbonate cages in a room with a 12 hour day – night cycle, temperature of 22º C ± 2ºC and humidity of 45%–64%. Animals were fed with a standard pellet diet and water ad libitum. All studies were carried after prior permission of Institutional Animal Ethics Committee. Ethical guideline for animal care and animal experimentation by Committee for the Purpose of Control and Supervision on Experiments on Animals (CPCSEA) were followed.

Sample size: According to previous study20sample size is calculated using the formula –

Observations of different groups were compared using ANOVA along with Post-HOC Dunnett’s T3test or Chi square test, as appropriate.

All analysis were done using SPSS 16.0 Version. P<0.05 was considered as significant.

Neuropathic pain was induced using anticancer drug cisplatin as per the method of Mansour et al. (2013)16. Adult rats were treated with i.p. injection of cisplatin (2 mg/kg) twice weekly (a total of nine injections in 4.5 weeks. Each group was administered their respective drugs after induction of neuropathic pain followed by pain assessment was carried out to detect and quantify neuropathic pain.

In groups 1 to 6 at 5 week, after induction of neuropathy pain assessment was done at 0, 30, 60, 90, 120 & 240 minutes after administration of single dose of test drugs. Following tests were carried out to detect and quantify neuropathic pain16, 21.

1 Eddy’s hotplate: It was done according to the method of Hogan et al (2004)21. Animal was placed on the hotplate and observed for either paw licking or jumping reaction. The reaction time was recorded by stop-watch. Cut-off time was set at 30 seconds to avoid any further injury.

2 Tail flick method (Analgesiometer):  It was done according to the method of Mansour Set al (2013) 16. Animal was placed into restrainer and leaving the tail exposed outside the restrainer. The time of tail flick is measured and recorded. The cut-off time was set-up 30 seconds to avoid any further injury.

3 Soft/ Light touch: It was done according to the method of Hogan et al (2004)21. An 8-mm-wide Camel brush was stroked longitudinally along the center of the paw. The response was scored as either none or positive if the paw was removed.

4 Crude touch with needle:  It was done according to the method of Hogan et al (2004)21. The point of a 23-gauge spinal anesthesia needle was applied to the center of the paw with enough force to indent the skin but not to puncture it. The response was scored as either none or positive if the paw was removed.

Pain assessment at 5 weeks – after induction of neuropathic pain.

Effect of Nigella sativa, pregabalin & tramadol on cisplatin induced neuropathy in rats. Reaction time in seconds on Hotplate at 5 weeks 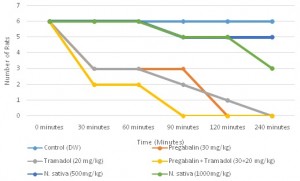 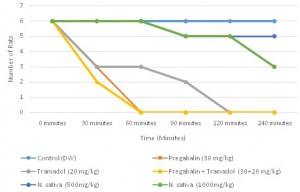 DISCUSSION: In our study Nigella sativa increased reaction time of rats with cisplatin induced neuropathic pain on hotplate as well as tail flick apparatus showing its analgesic effect through spinal and supraspinal pathways. Nigella sativa oil and thymoquinone produce antinociceptive effects which was blocked by naloxone, naloxonazine, norbilatorphimine and naltridone & oil produced antinociceptive effect through indirect activation of the supraspinal µ (1) - and kappa (κ) - opioid receptor subtypes 13. However, in a study they failed to demonstrate reversal of analgesic activity of steam distilled essential oil of Irani black cumin seed by naloxone 22. It was reported that Nigella sativa polyphenols did not produce a significant analgesia on tail flick test in mice which showed lack of activity on spinal opioid receptor and failure of naloxone to reverse analgesia on formaline test. However, failed to observe analgesic effect of Nigella sativa polyphenols in tail flick test. This suggest that active components other than polyphenols in Nigella sativa ethanolic extract may be responsible of their analgesic effect on spinal level8.

Anti-inflammatory and analgesic action of Nigella sativa on carrageenan induced paw oedema. It also produced significant increase in the hot plate reaction time in mice indicating analgesic effect24. Several studies 8, 19, 25 have demonstrated analgesic activity of Nigella sativa through peripheral mechanism including cyclooxygenase enzyme 26. In our study, we can predict that beside analgesic activity at spinal and supraspinal levels there may be peripheral mechanisms showing anti-inflammatory activity at nociceptive pathways acting on spinal cordcausing decreased release of inflammatory mediators 27.

Ethanolic extract of Nigella sativa possessed significant analgesic activity in mice. The active ingredients and components obtained in each of these extracts/oils also differ from each other. Thymoquinone has remained one of the main components in almost all of these extracts/oils13, 22, 28. But whether thymoquinone alone or some other active agents are also responsible for analgesic effect, is still unclear. Thymoquinone is reported to inhibit the generation of thromboxane A2 and leukotriene B4, thus suggesting an inhibitory effect on both the cyclo-oxygenase and lipo-oxygenase pathway 29.

Pregabalin versus tramadol for postoperative pain management in patients undergoing lumbar laminectomy, in which pregabalin showed statistically significant analgesic effects compared to placebo, but the effect was found to be less prevalent compared to tramadol 30. In our study we could not find any statistical difference between analgesic effects of pregabalin and tramadol in cisplatin induced neuropathic pain in rats. However, pregabalin & tramadol combination showed early onset of response on all tests (hotplate, tail flick, crude touch & soft touch) but no additive and/ or synergistic effect was found.

Clinical implication of Nigella sativa can be in preventing & curing neuropathy. Further studies are required to elucidate its active principles & mechanism of action followed by clinical studies to advocate its clinical use as a dietary supplement as well as therapeutic agent.

Further studies are required to advocate clinical use of Nigella sativa in neuropathic pain.

ACKNOWLEDGEMENT: I would like to thank organizers of national conference entitled ‘Novel Tools and Treatment Approaches in Health Care System’ for selecting my paper for oral presentation, organized at Faculty of Pharmacy, Integral University, Lucknow on 3rd March 2015.