To analyse the situation of antibiotic resistance, a total of 77 E. coli isolates from urine, pus, sputum and endo-tracheal aspirate were screened for their antibiograms for antibiotic resistance, multiple antibiotic resistance (MAR) index for evaluating the spread of resistance and plasmid profiles for the presence and characterization of plasmids. Very high resistance level (>90%) was detected against ampicillin, amoxicillin, ceftazidime, norfloxacin, tetracycline while imipenem and amikacin recorded the least resistance levels of 2.3% and 13.9% respectively among the isolates. An increased resistance to amoxicillin, tetracycline, cotrimoxazole and norfloxacin were observed in this geographical area which however displayed a lower resistance in other countries. The MAR index varied considerably, the lowest was 0.18 and the highest was 0.89. Plasmids of 10 size ranges were detected in the isolates. Some isolates possessed single sized plasmid while other possessed multiple plasmids. Isolates with high multi- antibiotic resistance profiles were found to possess multiple plasmids. This study shows that regular antimicrobial sensitivity surveillance is necessary and acquisition of plasmid could greatly contribute in the antibiotic resistance and poses a significant risk of the spread of microbial resistance in this community.

INTRODUCTION: Escherichia coli is a multi-talented, very adaptive, enteric gram-negative bacillus, which belongs to the family Enterobacteriaeceae. Most strains of E. coli live as commensal, many perhaps all are opportunistic pathogens of humans. E. coli is one of the main causes of both nosocomial and community acquired infections in humans. The organism is therefore of clinical importance and can be isolated from various clinical specimens. It is one of the organisms most frequently isolated from blood 1, 2, 3. E. coli has now been established as etiological agents of human gastroenteritis, enteric fever, septicemia, localized infections and diarrhea disease of humans 4.

The antibiotic susceptibility of bacterial isolates is not constant but dynamic and varies with time and environment 5. Indeed, high resistance rate to several antimicrobial agents have been observed in commensal bacteria in developing countries 6.

E. coli is highly resistant to ampicillin, amoxicillin, tetracycline and trimethoprim – sulfamethoxazole 7. E. coli became resistant as a result of genetic mutations or acquisition of pre-existing genes that confer resistance 8 which occur either in the deoxyribonucleic acid (DNA) of the bacteria chromosomes or plasmids 9. Thus antibiotic resistance can be disseminated to other bacteria by the plasmid during conjugation 10.

The rapid spread of antibiotics resistance genes in bacterial population is due to selective pressure resulting from the intensive and the indiscriminate use of antibiotics in human therapy 11. This rapid dissemination of drug-resistant bacteria is an increasing global concern, as it seriously complicates the treatment of infections 12, 13. The association of these pathogenic organisms with diseases in humans has increased the importance of epidemiological studies. This demands the need for periodic screening of common bacterial pathogens for their antibiotic susceptibility profiles in different communities.

Therefore, E. coli could serve as an indicator bacterium for so called ‘alert organism surveillance’14. Historically, serotyping has been extensively used for identification of Salmonella, Pseudomonas and E. coli for epidemiological purposes but several other methods, including phage typing, biotyping, antibiotic resistance determination and plasmid profile analysis are now available. A number of plasmid screening procedures which vary in subtle ways have been used for the detection of plasmid 15.

In this study, we investigated the resitance profile of E. coli isolates obtained from urine, pus, sputum and endo-tracheal aspirate to common antibiotics and the existence of plasmid DNA which confer antibiotic resistance in E. coli.

Results were interpreted as percent sensitive (% S) and percent resistant (% R) isolated derived using CLSI and WHO breakpoints. Intermediate isolates were counted as resistant to all the agents tested. A multiple drug resistance (MDR) phenotype was defined as resistance to ≥ 2 antimicrobial agents. Only E. coli isolates which showed MDR (58 isolates) were included for further investigation for MAR index study and plasmid profile analysis. Multiple antibiotic resistance (MAR) index is a tool to analyze health risk and is helpful to check the spread of bacterial resistance in a given population 18, where there is resistance to more that three antibiotics. It is calculated as the number of antibiotics to which test isolate displayed resistance divided by total number of antibiotics to which the test organism has been evaluated for sensitivity. The value of MAR index 0.2 differentiates the low and high risk. MAR index greater that 0.2 implies that the strain of such bacteria originate from an environment where several antibiotics are used.

Plasmid profile revealed that a total of 10 different sized plasmids were possessed by the isolates. The smallest plasmid was of size ≤ 2.0 kb and the largest was above 23.13 kb (see figure 1). It was an interesting finding that the maximum number of resistant E. coli isolates belongs to MAR index 0.6 and 0.7 and these groups also possessed maximum variation of plasmid size (starting from 2 Kb to 23 Kb). The number of plasmid bands in low and medium resitance profile (groups with MAR index 0.5 and below) varied between 1-3, while the number of plasmid bands in the high resitance profile (group above 0.5 MAR index) varied between 4-10. Plasmid sized 21 kb was the most common plasmid which was present in 6 groups of MAR index (0.1, 0.2, 0.5, 0.6, 0.7 and 0.9) (see table 3). 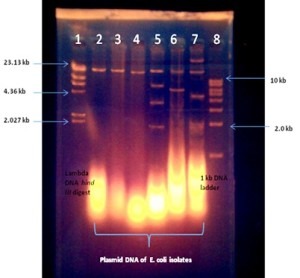 Thus, the result from the present study, showed higher resistance of E. coli isolates to the antibiotic amoxicillin which alarms us of the possibility that the E. coli could have become resistant to many more antibiotics to which it displayed lower resistance.

In recent years, use of fluorquinolones has increased in many countries and emergence of resistance of bacterial isolates to fluoroquinolones has been observed. Consistent step up in E. coli resistance to ciprofloxacin was observed from 1995 (0.7%) to 2001 (2.5%) 24.

The reason for the high resistance to antibiotics may be due to increase in an irrational consumption rate, transmission of resistant isolates between people, self-medication and non-compliance with medication and sales of substandard drug.

Isolates in this study were highly sensitive to nitrofurantoin (76%). Extreme sensitivity of E. coli isolates to nitrofurantoin has earlier been reported 26. However, in this study we found that the E. coli isolates were extremely sensitive to Imipenem (97.6%) and Amikacin (86%). Our results are in contrast to Uma et al 27, who reported high resistance to imipenem. It is interesting to note that the antibiotics Imipenem and Amikacin are only available for intravenous administration and provided on prescription only.

Hence, the route of administration of these antibiotics may have reduced its misuse which had led to the reduction in the emergence of resistant bacterial strains. Our results are in contrast to previously reported in the present study, E. coli isolates from UTI patients were highly sensitive to Nitrofurantoin (82.2% sensitive) which correlates to those reported earlier 24. However, we found that Imipenem was extremely effective in E. coli isolates from UTI patients (100% sensitive), pus samples (100% sensitive) and sputum samples (95.5% sensitive).  This was followed by Amikacin with sensitivity 85.2% in UTI patients, 85.8% sensitive in pus samples and 95.5% sensitive in sputum samples.

The Multiple Antibiotic Resistance Index data revealed interesting finding that majority of E. coli isolates belong to the group with MAR index above 0.5 (see table 3). This indicates that a very large proportion of the bacterial isolates have been exposed to several antibiotics. It was an interesting finding that the maximum number of resistance E. coli isolates had MAR index between 0.6 and 0.7 and these isolates possessed maximum variation of plasmid size (starting from 2 Kb to 23 Kb). Plasmids of 10 size ranges were detected in the isolates.

Some isolates possessed single sized plasmid while other possessed multiple plasmids. Isolates with high MAR index (above 0.5) were found to possess multiple plasmids (see table 3). Thus, this study shows that the antibiotic resistance in E. coli is controlled by the plasmid number and plasmid size.

Since antimicrobial resistance patterns are constantly evolving and present global public health problem, there is the necessity for constant antimicrobial sensitivity surveillance.

This will help clinicians in providing safe and effective empirical therapies. Moreover, this study shows a good prospect for further research to investigate the exact cause of antibiotic resistance and to understand the mechanism of rapid development of resistance to the newly synthesized antibiotics to which the bacteria were never exposed previously.

CONCLUSION: This study showed that antibiotic like Imipenem which display high resistance in other regions across India is still very effective in our environment while conversly an increased resistance to amoxicillin, tetracycline, cotrimoxazole and norfloxacin were observed. In our study, MAR index proved to be helpful in analyzing health risk and the spread of antibiotic resistance. The MAR index data revealed that isolates with lowest and highest MAR index are present in our environment which is a major health risk.

As, antimicroboal resistance pattern are constantly evolving in our region. There is a necessity for constant antimicrobial sensitivity surveillance and susceptibility testing to be conducted prior to antibiotics prescription in India. It was also observed that route of antibiotic could contribute in checking antibiotic resistance. Plamid profile revealed that the antibiotic resistance in this geographical area is plasmid borne.

Hence, our data will help clinician in this region provide safe and effective emperic therapies and could contribute to decrease in emergence of resistance.

ACKNOWLEDGEMENTS: We gratefully acknowledge the management of SRMS-IMS for the financial support to this work. We would also like to thank the Microbiology Department, SRMS-IMS for providing E. coli isolates for this study.