A. Anita Margret* and S. Aishwarya

Drug delivery is the most essential feature in drug administration facility and the design of Nanosystems makes the action more consistent an appropriate. Polymer nano particles bind efficiently to the drug and disperse the drug proficiently into the system. The efficacy of many drugs is often limited by their potential to reach the site of therapeutic action. In most cases (conventional dosage forms), only a small amount of administered dose reaches the target site, while the majority of the drug distributes throughout the rest of the body in accordance with its physicochemical and biochemical properties. Therefore, developing a drug delivery system that optimizes the pharmaceutical action of a drug while reducing its toxic side effects in vivo is a challenging task. This study focuses on the preparation and characterization of biopolymeric alginate and chitosan nanoparticles for encapsulating the antidepressant drug Venlafaxine XR and analyzing it as an effective drug carrier and delivery system.  The study reports a method to predict the encapsulation efficiency of chitosan as an effective biopolymer. The profiles of FTIR’s spectra reveal the entrapment of chitosan, alginate and Venlafaxine XR. A comparative analysis was done by isolating chitosan from mushrooms and with that of commercially obtained chitosan. The distinct peak values enumerate the similarity in both the chitosans assayed. The binding affinity for the compounds chitosan and Alginate proves to be good and binding energy was found to be 0.21K Cal/mol. The Quantitative Structure Activity Relationship of the two compounds chitosan and alginate satisfied all the necessary parameters of LIPINSKI’S rule of five. It was observed that strong electrostatic interaction exists in the nanoparticles. Quantification of the drugs in a nano scale improves the dispersal and absorption rate of the drug. Entrapment of the drug venlafaxine XR is also significant because depression is nowadays becoming a mojor problem among the population.

INTRODUCTION:Nanoparticulate delivery systems have the potential power to improve drug. One of the most attractive areas of research in drug delivery today is the design of nanosystems that are able to deliver drugs to the right place, at appropriate times and at the right dosage. stability, increase the duration of the therapeutic effect and permit administration through parenteral administration, which may prevent or minimize the drug degradation and metabolism as well as cellular efflux 1. Nanoparticles consist of macromolecular materials and can be used therapeutically as adjuvant in vaccines or drug carriers, in which the active ingredient is dissolved, entrapped, encapsulated, adsorbed or chemically attached. Polymeric nanoparticles hold significant promise as potential dug carriers for treating diseases and disorders. Chitosan is a linear polysaccharide composed of randomly distributed β-(1-4)-linked D-glucosamine (deacetylated unit) and N-acetyl-D-glucosamine (acetylated unit). It has a number of commercial and possible biomedical uses. Chitosan received attention as a material for nanoparticles for the decade Chitosan is a well-known natural cationic polyelectrolyte 2, 3.

An antidepressant is a psychiatric medication used to alleviate mood disorders, such as major depression and dysthymia and anxiety disorders such as social anxiety disorder. Venlafaxine (also called Effexor or Efexor) is an antidepressant of the serotonin-norepinephrine reuptake inhibitor (SNRI) class 4. In the body, the drug loaded in nanoparticlesis usually released from the matrix by diffusion, swelling,erosion, or degradation 5. Recently, the idea of using nanoparticles made from natural biodegradable polymers to deliver drugs has provoked great interests. Among them, alginate and chitosan are very promising and have been widely exploited in pharmaceutical industry for controlling drug release 6.

Nanoparticulate drug carriers include a class of particles made of polymers or lipids that because of their size and chemical compositionpermit systemic and local treatment. In general, these systems are expected to protect a drug from degradation, enhance drug absorption by facilitating diffusion through epithelium, modify the pharmacokinetic and drug tissue distribution profile and/or improve intracellular penetration and distribution 7, 8, 9.

The efficacy of many drugs is often limited by their potential to reach the site of therapeutic action. In most cases (conventional dosage forms), only a small amount of administered dose reaches the target site, while the majority of the drug distributes throughout the rest of the body in accordance with its physicochemical and biochemical properties. Therefore, developing a drug delivery system that optimizes the pharmaceutical action of a drug while reducing its toxic side effects in vivo is a challenging task.

The study focuses on the preparation and characterization of biopolymer alginate and chitosan nanoparticles for encapsulating the antidepressant drug (Venlafaxine XR) and analyzing it as an effective drug carrier and delivery system. The drug encapsulation efficiency was characterized by FTIR  (Fourier Transform Infrared Spectroscopy) analysis and morphological determination by SEM (Scanning Electron Microscope) studies. The binding energy and  QSAR (Quantitative Structure Activity Relationship)  between the biopolymer and the drug was inferred. The nanoparticle formulated drug offers numerous advantages over the conventional drugs.

MATERIALS AND METHODS: Chitosan (MW is 75000, degree of deacetylation is 80%)was acquired from Himedia Laboratories, Mumbai. Sodium alginate of low viscosity, Venlafaxin XR(manufactured by Osmotica Pharmaceutical Corp and Sun Pharmaceutical Industries, Inc).All other chemicals and reagents used were of analytical grade.

Collection of Samples: Commercially available fresh mushrooms (Agaricus bisporus) were purchased from markets and deacetylation steps were carried on to isolate chitosan.

Isolation of Chitosan from Mushroom (Agaricus   bisporus): Mushrooms Agaricus bisporus were  washed exhaustively with water after adjusting pH with KOH to 8-9. Chitosan was extracted from the washed mushrooms with KOH and HCl using a method developed by combination and modification of methods by Muzzarelli 10 and White et al.11. Mushroom biomass was treated with 60% (w/v) aqueous KOH solution (10 ml per 1 g of dry mycelium) at 130oC for 2-3 h to remove proteins, lipids and alkali-soluble polysaccharides.

The insoluble material was washed with water and concentrated ethanol. For chitosan isolation, this freeze-dried alkali insoluble fraction was boiled with diluted 0,1 - 1% (v/v) HCl or acetic acid  solutions  (50 ml per 1 g of dry matter) for   10-40 min. The pH value of the acidic supernatant was increased to 9,5 with 2M NaOH. The alkali-insoluble precipitate (presumable chitosan) obtained was repeatedly centrifuged and washed with distilled water, freeze dried and weighed.

Preparation of Blank Chitosan-Alginate Nanoparticles: Both the sodium alginate and calcium chloride solutions were prepared by dissolving the chemicals in distilled water. The pH of the sodium alginate solution was adjusted to 5.1 using hydrochloric acid. Briefly, a known amount of chitosan was dissolved in 1% acetic acid solution and pH was modified to 5.4 using NaOH. The method used to prepare the nanoparticles is a two step method adapted from Rajaonarivony’s 12 method of preparing alginate–poly-L-lysine nanoparticles Aqueous calcium chloride (2 ml of 3.35 mg/ml) was added dropwise to 10 ml aqueous sodium alginate (3.0 mg/ml) while stirring for 30 min (magnetic stirrer), and then 4 ml chitosan solution (0.8 mg/ml) was added into the resultant calcium alginate pre-gel and stirred for an additional 1 hour. The resultant opalescent suspension was equilibrated overnight to allow nanoparticles to form uniform particle size.

Preparation of Venlafaxin XR Loaded Chitosan-Alginate Nanoparticles: A constant volume (300μl) Venlafaxine XR solution in a dehydrated alcohol/water mixture (1:1, 1.105 mg/ml) was incorporated into the calcium chloride solution, then the other processes were the same as the preparation of blank chitosan-alginate nanoparticles.

Quantitative Structure Activity Relationship: To predict the QSAR(Quantitative Structure Activity Relationship) the software DRAGON was used. The structure of   Chitosan and Alginate were downloaded from Pubchem. The compounds were loaded into the software and the necessary descriptors were selected. The program was allowed to run. The various activities of the compounds based on the structure were viewed and saved.

RESULTS AND DISCUSSION: The crude chitosan isolated from mushroom (Agaricus bisporus) was compared with the commercially obtained chitosan by means of Infra red spectroscopy analysis. The entrapment efficiency of the two biopolymers along with the drug was studied. The morphological characterization of the drug loaded polymers was subjected to SEM analysis. The quantitative structure analysis and Binding energy calculation of the both biopolymers was studied .The details are discussed in this chapter. 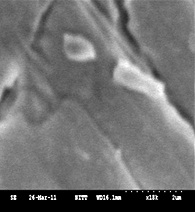 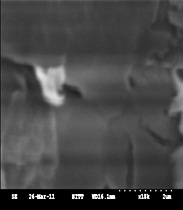 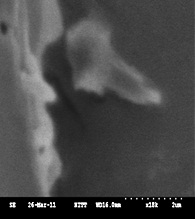 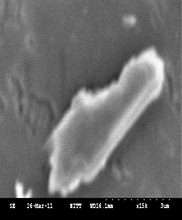 FTIR Spectra Characterization: The chitosan was effectively isolated from mushroom sample and a comparison was also made with that of the commercially available chitosan. This was studied by the FTIR analysis to categorized potential interaction of the molecule. 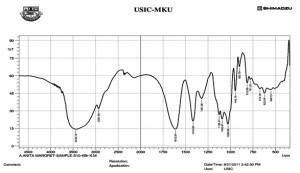 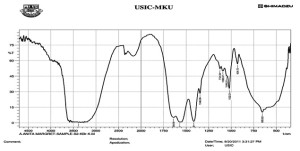 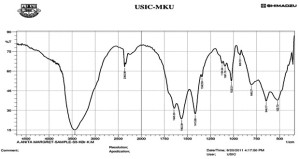 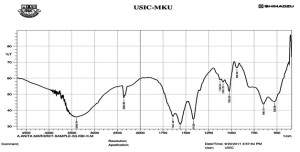 In the spectra of Commercially obtained chitosan (fig. 4c), the broad band at 3435.34cm-1 corresponded to the amine and hydroxyl groups; the peak at 2922.25cm-1 denotes the –OH stretching; the sharp peak at 2368.66cm-1 denotes phenyl ring substitutions; The absorbtion band of the carbonyl (C=O) stretching of the (amide I band)is located at 1649.19  cm-1. The peaks observed at 1427.37cm-1 and 1379.15 cm-1 belong to the N-H stretching amide and ether bonds and N-H stretching (amide III band) respectively. The peak observed at 1030.02cm-1 were the primary hydroxyl group (characteristic peak of CH2-OH in primary alcohols, C-O stretch. Whereas the isolated crude chitosan (fig. 4d) also illustrates the above mentioned approximate peak values.

Additionally, peak values such as 1570.11cm-1 and 1074.39cm-1 denotes the bending vibrations of N-H (N-acetylated residues, amide II band) and the secondary hydroxyl group (characteristic peak of –CH-OH in cyclic alcohols, C-O stretch). The bands around 1028.09cm-1 (C-O-C stretching) in the spectrum of sodium alginate (fig. 3a) contributes saccharide structure. The band at 1415cm-1 denotes the symmetric stretching peaks of carboxylate salt groups. In the IR spectra of VenlafaxinXR loaded chitosan/alginate (fig. 6g, h) nanoparticles, we can observe the  (C-O-C stretching) groups have shifted to 1024.24cm-1. In addition the absorption bands of sulphur compounds (sulphonic acids) 1126.47cm-1 and 1093.67 cm-1 have shifted to 1124.54cm-1 and 1091.75cm-1.

After reacting with alginate the peaks of chitosan (both commercial and isolated) too seems to have a characteristic shift 3396.76cm-1 (the amine and hydroxyl groups), 2360.95cm-1 (phenyl ring substitutions) and 1641.48cm-1 (carbonyl (C=O) stretching of the (amide I band)). The drug Venlafaxin XR (fig. 3b) displays several peak values but a characteristic value at 3323.46 cm-1 and 1612.54cm-1 which depicts N-H bending vibrations with secondary amine groups. The absorption bands of the drug appeared in VenlafaxinXR loaded chitosan/alginate nanoparticles, which probably indicates that the drug was filled with polymeric network. These results indicate that there are electrostatic interactions between the compounds to form the polyelectrolyte complex.

The Binding free energy for the complex Chitosan and Alginate is 0.21K Cal/mol.

The present research the study reports a method to prepare CS/ALG Nanoparticles based on the formation of a polyionic complex between two biopolymers. This analysis predicts the encapsulation efficiency of chitosan as an effective biopolymer. The profiles of FTIR’s spectra reveals the entrapment of chitosan, alginate and venlafaxine XR. A comparative analysis was done by isolating chitosan from mushrooms and with that of commercially obtained chitosan. The distinct peak values enumerate the similarity in chitosan both standard and isolated assayed. 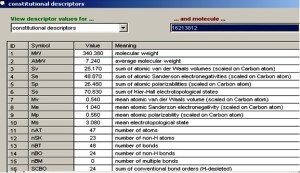 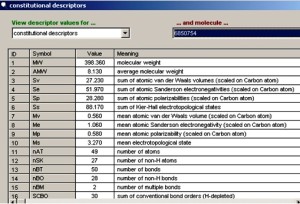 TABLE 1: CALCULATED PROPERTIES OF LIPINSKI’S RULE FOR THE COMPLEX CHITOSAN AND ALGINATE

CONCLUSION: The study reports for the possibility of entraping venlafaxine XR within Chitosan/Alginate nanoparticles using a very simple ionotropic pre-gelation technique. This study focused on the production of chitosan which is significant in medical field. Chitosan isolated from the mushroom sample was compared with that of the commercial sample and the FTIR analysis revealed analogous attribute features between them. The binding affinity of the polymers shows significant binding energy which establish them as efficient binding agents. Entrapment of the drug venlafaxine XR is also significant because depression is nowadays becoming a major problem among the population. Quantification of the drugs in a nano scale improves the dispersal and absorption rate of the drug. It was observed that strong eletrostatic interaction exists in the nanoparticles.

The strength of drug delivery systems is their ability to alter the pharmacokinetics and biodistribution of the drug. Nanoparticles have unusual properties that can be used to improve drug delivery. Where larger particles would have been cleared from the body, cells take up these nanoparticles because of their size. In conclusion this  new nano systems also offers and interesting potential for the delivery of antidepressants drugs.

A. Anita Margret* and S. Aishwarya