ABSTRACT: Objective: The objectives are to assess the drug dose administration and reduce the dose toxicity in geriatric patients. Method: A Prospective interventional study has been carried out on drug dose administration in geriatric patients with respect to creatinine clearance rate at a tertiary care hospital for about 6 months. A total number of 204(47 baseline+157study) geriatric patients are included who has attended the general medicine ward. Results: In our study, we observed that Creatinine clearance was decreased as age increases. In study population 60-65yrs (48.6ml/min) was more, in 80-85yrs (29.2ml/min) was less and also similar in baseline study. So we can understand that geriatrics has  a moderate renal failure. In a baseline among 47 subjects, 53% require dose modifications. In baseline 11 (44%) subjects experienced adverse drug reactions. Mostly Augmented types of adverse effects were observed. Among 157 study population, 28% were undergone dose modification by the suggestion of a pharmacist. It was observed that in 31 (70.4%) dose of the drug was reduced, in 6(13.6%) dose interval was increased, in 7(16%) both dose and dose interval was changed. Among the study population, 8(18%) were experienced adverse drug reactions. As compared to baseline, in study population the adverse drug reactions and dose burden on the renal system is reduced. Conclusion: The geriatric patient’s creatinine clearance was decreased with respect to the age. It was observed that dose modifications were needed based on Creatinine clearance in geriatrics. The clinical outcome of the patient was improved, and adverse effects were reduced after dose modification. Pharmacist intervention plays a pivot role in avoiding drug-related problems and improves the quality of life

Pharmacodynamic changes alter the effectiveness of the drug due to alteration of sensitivity and number of receptors. The amount of drug reaches the systemic circulation is determined by the pharmacokinetics of a drug. Elimination is more influenced in pharmacokinetic parameters due to loss of kidney function 6. Physiological changes related to excretion in elderly are decreased renal blood flow, kidney mass, reduction in the number of functioning nephrons and glomerular filtration rate are decreased 7.

Aims of our study are.

The study was conducted in a government tertiary care teaching hospital in a period of six months. The subjects were selected based upon inclusion and exclusion criteria. The study material consists of a data collection form approved by an ethical committee of the institution, and confidentiality was assured for data.

Geriatric patients (≥60) who were attending the general medicine wards of government general hospital.

It was a prospective interventional study to assess the drug dose administration in geriatric patients with respect to Creatinine clearance rate. Patients of either gender greater than or equal to 60 years of age were included into the study. The patient demographic details like age, sex, weight, height, diagnosis, laboratory tests which include renal function tests and other laboratory data were recorded. Creatinine clearance was calculated by using the Cockcroft gault equation13, 14.

For Obese patient's Ideal Body Weight was calculated & for the patients who are critically ill/ immobilized an equation is used for the prediction of weight 15.

Upon calculating the creatinine clearance, the dose was estimated and modified by using various literature and standard references like.

A baseline study was conducted for one month, to assess the pattern of prescribing a dose in the geriatrics and the clinical outcomes in geriatric patients. The included subject’s creatinine clearance was calculated and estimated their drug dose. The follow-up was conducted for the patients during the hospital stay, and the observed outcome is recorded. 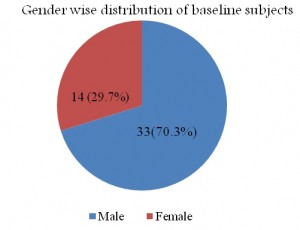 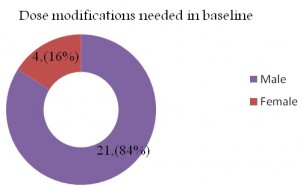 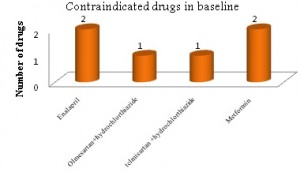 Among 47 subjects 6(12%) have contraindicated drugs. 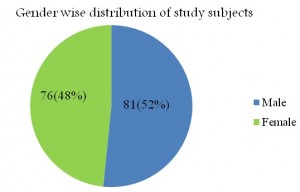 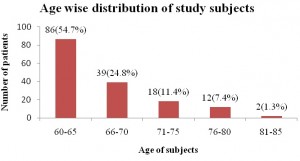 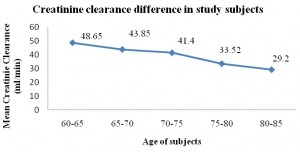 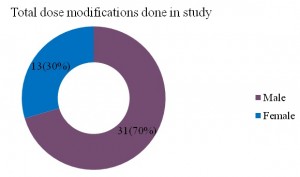 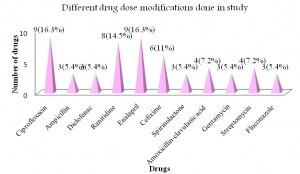 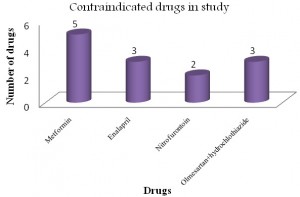 FIG.13: TYPE OF DOSE MODIFICATIONS DONE IN THE SUBJECTS

DISCUSSION: A total number of 204 (47 baseline+157 study) subjects were included in this prospective interventional study conducted for 6 months duration. The baseline study was conducted to observe the drug prescribing pattern of drugs in geriatrics with respect to creatinine clearance rate. In a one-month baseline study, total 47 subjects were included. Out of which 70% were males and 30% were females. In our study we observed geriatric patients of age 60-65 yrs were more, as age increases the number of admitted patients were decreased. It was observed that there is less number of healthy and live geriatrics. The Creatinine clearance 45.4ml/min was more in 60-65 yrs of age and it was decreased as age increases 21 ml/min was low in 81-85 yrs of age. In another study stated that in geriatrics the Creatinine clearance was decreased as age increases and it is mostly <60ml/min 18.

In the next 5 months of interventional study 157 subjects were included. Among them 52% subjects were males and 48% subjects were females. In study also males were more than females but there is no much difference as previous in baseline. Subjects of age 60-65 yrs were 54.7% and the numbers of subjects were decreased as age increases. In the study population, Creatinine clearance of 60-65 yrs (48.6ml/min) and it was decreased as age increases. A total of 44(28%) subjects require drug dose modification based on creatinine clearance. With the suggestion of Pharmacist, the physicians modified the drug dose regimen in study population. Enalapril, ciprofloxacin were the highest percentage of drugs which require dose modification in the study.

In study period also Enalapril and ciprofloxacin needed higher number of dose modification as in baseline. In contraindicated drugs metformin was highly observed.  Among dose modifications, dose was reduced for 70.4% of subjects, dose interval was increased for 13.6% of subjects, both dose and dose interval was reduced for 16% of subjects. Among 44 dose modified subjects 8(18%) were experienced adverse drug reactions. Some adverse drug reactions were observed even after dose adjustment, may be because of other pharmacodynamic parameters. The adverse drug reactions observed in study were decreased compared to baseline like, Diarrhea(n=0), Hypotension(n=0), Hypokalemia(n=0) etc, thereby we can understand that adverse reactions and toxicity were decreased due to either change of drug dose or drug interval in geriatrics. Pharmacist plays an immodest role in calculating and assessing the dosage regimen in geriatrics. Pharmacist role is important in vulnerable patients like geriatrics. Long term studies and effective methods like therapeutic drug monitoring were required for better results and therapeutic recommendations.

CONCLUSION: The renal function which estimated by Creatinine clearance was decreased as age increases. So drug dose adjustments are necessary to avoid adverse effects based on their Creatinine clearance. The dose adjustment was needed either by increasing dose interval, dose reduction or contraindicated drugs. The patient’s higher plasma levels were reduced by changing the dosage regimen. There was a significant difference was observed in the outcome of the patient after dose adjustments. The patient’s side effects were reduced and expected toxicity was avoided.  The Pharmacist play’s a pivot role in calculating the dosage regimen and to improve the quality of life in geriatrics.