A STUDY ON EFFECT OF THERMAL SINTERING ON GASTRIC FLOATING TABLETS

A STUDY ON EFFECT OF THERMAL SINTERING ON GASTRIC FLOATING TABLETS

ABSTRACT: The purpose of this study was to develop a gastroretentive controlled release drug delivery system using sintering for enhanced oral bioavailability using carnauba wax polymer. Formulations (CC1-CC3) were prepared by wet granulation method and then exposed to sintering temperature at different time intervals. The optimized formula showed zero-order drug release kinetics for the period of 12 h. The results revealed that sintering temperature and time of exposure significantly affected the in-vitro drug release and floating character. FTIR Spectra showed no noticeable incompatibility between drug and polymers in both physical mixtures and in the formulation.

INTRODUCTION: Annealing is processed to heat the polymer at a certain temperature for a specified period of time. Because of this treatment, it influences the mechanical properties of polymers with the association of time-dependent nature of glass transition 1-2. Thermal treatment effects the drug release by decreasing the release rate. This may be due to increase in tensile strength 3. Gastric residence time (GRT) is most important for formulation to design stomach specific dosage forms but efficacy of oral drug delivery was reduced due to gastric emptying 4-6. Gastro retentive drug delivery systems help to retain the dosage form in the stomach and improve oral bioavailability of drugs that have absorption windows at upper GIT 7-8. In the present study captopril was selected as a model drug candidate. Captopril is an angiotensin-converting enzyme inhibitor and widely used for the treatment of hypertension. Half-life of the oral drug dose is 2 h 9.

It is stable at acidic pH 1.2, and it is unstable as the drug shows degradation at higher pH along the GIT 10-11. BCS classification of captopril was class III. The present study effectively utilized polymer carnauba wax for the preparation and evaluation of floating tablets of captopril using carnauba wax by employing the annealing process.

DSC Studies: For thermal analysis of drug and drug excipient mixtures, a differential scanning calorimeter (DSC 821, mettle Toledo, Switzerland) was used. Individual samples, as well as optimized formulation, were taken in the pierced DSC aluminum pan and scanned in the temperature range of 25-300 °C at the heating rate of 10 °C min-1 under an atmosphere of dry nitrogen.

Preparation of Floating Tablets of Captopril: All the ingredients are weighed according to Table 1. Tablets are prepared by wet granulation method. PVPk30 was mixed with Isopropyl alcohol. Drug Polymer gas generating agent and diluent was passed through sieve #40 and then mixed to this add a granulating agent to get wet mass and passed through sieve # 10. Granules are dried for at 45 °C for 45 min and then passed through 22# sieve. Dried granules are lubricated with magnesium stearate and talc and compressed using 9 mm punches. Compressed tablets were exposed to 40 °C, 50 °C and 60 °C for 1 h, 2 h, 3 h, and 4 h, respectively. After annealing, tablets are cooled to room temperature and placed in a controlled environment.

In-vitro Evaluation of the Prepared Tablets: Weight variation and tablet friability test were carried according to USP, respectively.

Drug Content Uniformity: Ten tablets were individually weighed and crushed. A quantity of powder equivalent to the mass of one tablet was dissolved in 100 ml of 0.1 N HCl. After filtration through a cellulose acetate membrane (45 µm) Then drug content was determined by UV spectroscopy (UV-1650 PC Double beam spectrometer, Shimadzu, Kyoto, Japan) at a wavelength of 202 nm after suitable dilution with 0.1 N HCl 12.

Tablet Floating Behaviour: In-vitro buoyancy studies were studied by placing the tablet in a beaker containing 900 ml of 0.1N HCl maintained in a water bath at 37 ± 0.5 °C. The floating lag time and total floating duration were recorded 13.

In-vitro Dissolution Studies: Dissolution profiles of gastric floating tablets were determined by using USP XXIII paddle method. Tablets were placed into 900 ml of 0.1N HCl solution (pH 1.2) with 37 ± 0.5 °C and 50 rpm. 5 ml samples were withdrawn with replacement at a fixed time of intervals. Samples were diluted with medium when necessary and absorbance was measured at 202 nm14.

Evaluation of Mechanism of Release: The drug release mechanism was determined by fitting the release data to the various kinetic equations such as zero-order, first-order, and Korsmeyer-Peppas and finding the regression values of the release profile corresponding to each model. Zero-Order Kinetics: Zero-order as the cumulative amount of drug released versus time, C = C0 – K0 t Where K0 = zero-order rate constant and is expressed in units of concentration/time (hour). First-order kinetics First order as log cumulative percentage of drug remaining versus time, Log C = Log C0− k t / 2.303 Where, C0 = initial concentration of a drug, k= first-order constant and t = time Korsmayer Peppas equations Log cumulative percentage of drug released versus log time, and the exponent n will be calculated; M t / M ∞ = K t n, Where, Mt/M∞ = fractional solute release, t = time, K = kinetic constant characteristics of the drug/polymer system and n = exponent which characterizes the mechanism f release of tracers. If the exponent N = 0.45, then drug release mechanism is Fickian diffusion and if 0.45 < n < 0.89, then it is non – Fickian or anomalous diffusion 15-17. 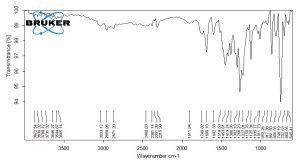 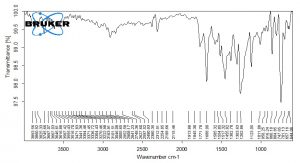 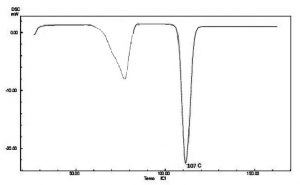 DSC: The DSC thermogram showed the endothermic peak at 107 °C, which is the melting point of the drug. In the DSC thermogram of tablet, the peaks were obtained nearly at same temperature of pure drug, which indicates no significant interaction between the drug and other excipients.

Physical Parameters of Unsintered and Sintered Tablets: All the unsintered and sintered formulated tablets had hardness 4-5 kg/cm2. The friability percentage was below 0.5%, the weight variation of tablets was within ±5%. Drug content uniformity of all the tablets were in the range of 98% to 101%. So, all the tablets have good physical characteristics. 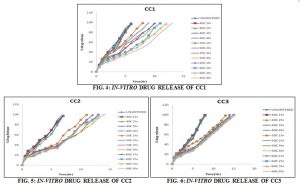 CONCLUSION: Here in this research, thermal sintering was studied to reduce the concentration of polymer and to achieve the desired dissolution profile. Experimental data concludes that floating lag time was decreased with annealing time of exposure. The dissolution profile shows that drug release was retarded with an increase in thermal treatment duration. Hence, the design of gastric floating tablets of captopril using carnauba wax can be prepared by the thermal sintering method.