ABSTRACT: Zanthoxylum armatum is administered as a hepatoprotective agent during indigestion and hepatic related diseases by traditional healers. So, the aim of this study was to investigate the hepatoprotective activity of ethanol extract of Z. armatum (ZAE) in Paracetamol induced hepatotoxicity in albino rats in comparison with the activities of the known and potent hepatoprotective standard drug Silymarin. Treatment with ZAE showed a significant (p< 0.001 - 0.05) decrease in SGOT, SGPT, direct bilirubin and total bilirubin when compared to paracetamol induced control group while the serum level of protein particularly albumin is elevated with the treatment of ZAE in comparison to normal rats and Silymarin treated paracetamol induced group. This means that treatment with ZAE significantly reversed the hepatic changes produced by paracetamol treatment in rats. The possible mechanism of action may be explored by studying the antioxidant effect of the ZAE. The present study demonstrates that the ethanol extract of Z. armatum significantly protects the liver against paracetamol induced hepatic toxicity in healthy albino rats.

INTRODUCTION: A phytotherapeutic approach to modern drug development can provide many invaluable drugs from traditional medicinal plants. According to many Ayurvedic or traditional sources, Zanthoxylum armatum is widely used as hepatotonic for many liver problems 1. Recently, the hepatoprotective activity of this plant was evaluated in CCl4 and paracetamol induced hepatic damage 2, 3. The present study was to evaluate the hepatoprotective property of the ethanol extract of the leaves of the plant in experimental animals by comparing with the efficacy of a standard drug Silymarin 4, 5, 6.

Silymarin is a well tolerated and effective drug for use in cases of hepatotoxicity produced by a number of hepatotoxic agents 2, 3. Therefore, Silymarin, a flavolignan compound, is used as a standard drug. The hepatoprotective property of Silymarin is related to the inhibition of lipid peroxide formation or scavenging of free radicals 2, 3, 4, 5, 6.

Preparation of Plant material: Authentication of the plant was done in the Department of Life Sciences, Manipur University (Accession number 004320). Fresh leaves of Z. armatum were collected randomly from Imphal area during March 2016. The leaves were washed thoroughly in running tap water for removing the surface microflora and other adherents. The leaves were dried in the shade and powdered by a mechanical grinder and stored in a tight container till the extraction work started.

Process of extraction: Extraction of the plant material was done following a procedure described by Valte et al., 2013 7. Briefly, about 150 gm of powder of the leaves was defatted with petroleum ether (60-80 °C) in Soxhlet apparatus. The defatted powder was spread out so as to evaporate the petroleum ether. Then the extraction was done with 99.9% ethanol in Soxhlet apparatus till the eluent became colourless. The extract was distilled so as to remove ethanol. The residue extract was allowed to dry and weighed, and kept in a porcelain jar at 4 ºC till used.

Animals: The protocol of the experiment was approved by the IAEC of the Regional Institute of Medical Sciences, Manipur, India (Reg No: 1596/Go/a/12/CPCSEA dt.8/2/2016). Healthy albino rats of either sex weighing 100-200 g was obtained from the animal house of Jawaharlal Nehru Institute of Medical Sciences (JNIMS), Manipur, India and acclimatized for 10 days by feeding with standard diet and water ad libitum in the experimental laboratory of the Department of Pharmacology, JNIMS. The animals were kept in clean and dry polypropylene cages with 12:12 h (light:dark) cycle at 25±2 °C and 45-55% relative humidity.

Acute toxicity testing: The animals were fasted overnight prior to the experiment and maintained under standard conditions. The ethanol extract of Z armatum (ZAE) was administered orally in the increasing doses i.e., from 2000 mg to 4000 mg of extract / kg body weight to a group of 10 rats. There was no mortality after 24 h. Similarly, the same dose was given intraperitoneally. There was no mortality after 24 h 8, 9.

Experimental design: Thirty six normal Wistar albino rats weighing in the range of 150-180 g were randomly divided into six groups, each comprising of six animals and were treated orally in the following methods 2, 3.

Biochemical studies: All rats were anaesthetised with ether after 24 h of the last doses and blood samples were collected from orbital sinus. Blood samples were allowed to clot and serum was separated by centrifuging at 2500 rpm for 15 min. Then the biochemical investigations were carried out following the methods described in the kits (Avantor). The estimation of various biochemical parameters namely serum glutamic-oxaloacetic transaminase (SGOT), serum glutamic-pyruvic transaminase (SGPT), direct bilirubin, total bilirubin, albumin, globulin and total protein were done 10, 11.

Statistical analysis: The data were statistically analysed and expressed as means ± SD. The difference among the means has been analyzed by one-way ANOVA followed by Tukey–Kramer multiple comparisons test using Graph pad software. A value of p<0.05 was considered as statistically significant.

Acute toxicity studies: The ZAE did not show any sign and symptom of toxicity and mortality up to 2000 mg /kg dose. But subjective toxicity (headache, nausea) study could not be done.

Effects of ZAE on SGOT, SGPT, direct bilirubin, total bilirubin, albumin, globulin and total protein: The results of hepatoprotective effect of the ZAE on paracetamol intoxicated rats are shown in Table 1 and Fig. 1 and 2. In the paracetamol intoxicated group, the elevated levels of SGPT, SGOT, albumin, total protein, direct bilirubin and total bilirubin were observed significantly when compared to normal rats (Group 1) indicating acute hepatic damage. The rats that received ZAE showed a significant (p< 0.001 - 0.05) decrease in the tested biochemical parameters viz., SGOT, SGPT, direct bilirubin and total bilirubin when compared to paracetamol induced control group. On the other hand, the serum level of protein particularly albumin is elevated with the treatment of ZAE in comparison to normal and Silymarin treated animals. But increase in the treatment concentration of ZAE did not produce significant improvement in its hepatoprotective effect. 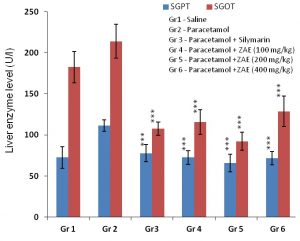 FIG. 1: EFFECT OF ZAE ON SERUM LEVEL OF LIVER ENZYMES (SGPT AND SGOT) IN PARACETAMOL INDUCED HEPATOTOXICITY IN RATS. EACH VALUE IS EXPRESSED AS MEAN ± SD OF SIX OBSERVATIONS. ***P < 0.001 WHEN COMPARED WITH CORRESPONDING VALUES OF GR 2 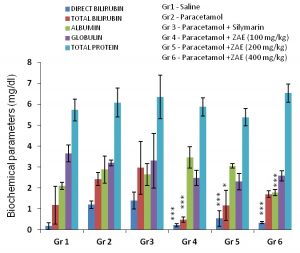 FIG. 2: EFFECT OF ZAE ON SERUM LEVEL OF DIRECT BILIRUBIN, TOTAL BILIRUBIN, ALBUMIN, GLOBULIN AND TOTAL PROTEIN IN PARACETAMOL INDUCED HEPATOTOXICITY IN RATS. EACH VALUE IS EXPRESSED AS MEAN ± SD OF SIX OBSERVATIONS. * P<0.05 AND ***P <0.001 WHEN COMPARED WITH CORRESPONDING VALUES OF GR 2

DISCUSSION: There are many reports regarding the consumption of parts of plant (leaves, flowers, fruits, and bark) as food tonic and for the treatment of many GIT disorders particularly hepatic disorders.  Referring to many studies about the hepatoprotective  properties of the extract of the  plant (barks, leaves) against the CCl4 and paracetamol induced  hepatic damage 2, 3 the present study was taken up to confirm the hepatoprotective effect of the ethanol extract of Zanthoxylum armatum against paracetamol induced hepatic damage because paracetamol is widely administered now a days as antipyretic-analgesic. This drug causes hepatic damage if consumed overdose accidentally.

In the assessment of hepatic damage, the determination of enzyme levels such as SGPT and SGOT are largely utilised because necrosis or membrane damage of hepatocyte causes the release of these enzymes into the circulation. Serum SGPT, SGOT and bilirubin level are also related to the function of hepatic cell.

The acute administration of paracetamol produced a marked elevation of the serum levels of SGPT, SGOT, bilirubin, protein in the treated animals (Group 2) when compared with that of the normal control (Group 1). Treatment with ZAE at the dose of 100 mg/kg, 200 mg/kg, 400 mg/kg significantly reduced the elevated levels of the enzymes as well as bilirubin, whereas the serum albumin level was elevated with the treatment of ZAE. This means that treatment with ZAE significantly reversed the hepatic changes induced by paracetamol in rats. The possible mechanism of action may be explored by studying the antioxidant effect of the ZAE 10.

The present finding supports the reported therapeutic use of Zanthoxylum armatum as a hepatoprotective agent against paracetamol induced hepatic damage in the Indian system of medicine.

CONCLUSION: The liver has capacity to recover from acute injury by hepatocellular regeneration with the production of new cells which restore liver function and normal tissue structure, but chronic liver injury often leads to fibrosis, scar formation, distortion of normal tissue structure. Acute injury is often manifested as depletion of cellular energy, ion deregulation, impaired cellular intermediary metabolism, inhibition of transport functions, and impaired stimulation of tissue repair 9, 11. The results of our study indicate that the ethanol extract of Zanthoxylum armatum protect the liver against paracetamol induced hepatic toxicity in healthy albino rats and also infers that it possesses significant hepatoprotective activity.

CONFLICT OF INTEREST STATEMENT: The authors declare that they have no competing interests.