INTRODUCTION: The term Polycystic Ovarian Disease (PCOD) was first described by Irving Stein and Michael Leventhal as a Triad of 'Ameno-rrhoea', 'Obesity' and 'Hirsutism' in 1935 when they observed the relation between obesity and reproductive disorders 1. It is hence also known as the 'Stein-Leventhal Syndrome' or 'Hyper-andro-genic Anovulation' (HA) and is the most common endocrine ovarian disorder 2.

Now a days, it is also referred to as the 'Syndrome O', i.e., over nourishment, overproduction of insulin, Ovarian confusion, and Ovulatory disruption. So, PCOD is called Polycystic Ovarian Syndrome (PCOS). Polycystic ovarian syndrome (PCOS) is a condition in which women have an imbalance of female sex hormones 3.

Women with PCOS produce higher than normal amounts of male hormones; this may lead to changes in the menstrual cycle, cyst in the ovary, failure to conceive, and other health problems. The Prevalence of PCOS is ranging from 2.2% to 26% 4. Risk factors for PCOS include Sedentary lifestyle, obesity, stress, lack of physical activity, History of Diabetes, infertility 5, Family history of PCOS, Mother’s irregular menstruation 6. 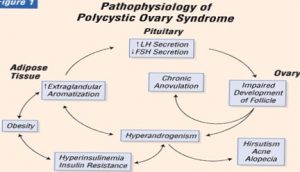 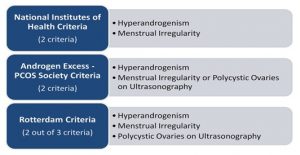 METHODOLOGY: The research type was a community-based Prospective Observational study. The study was carried out for a period of 8 months in the local colleges, Sangareddy, after careful consideration of inclusion and exclusion criteria. The aim of the study was to educate young adolescent girls about irregularities in menstruation cycles and steps to overcome the problems if they found their symptoms correlating with PCOS.

Obtaining Clearance Certificate from IEC: For obtaining the ethical clearance certificate, an application along with study protocol, which included the proposed title, study site, inclusion and exclusion criteria, objectives, and methodology about the work to be carried out was submitted to the chairman of Institutional Ethics Committee.

Collection of Data: The present study was planned to carry out for a period of 8 months, in which 805 subjects were included. The subjects chosen for the study are from local intermediate and degree colleges in Sangareddy District, Telangana State.

Analysis of Data: The data of the subjects included in the study was carefully entered and evaluated through tabulation to obtain bar diagrams, pie charts, and to draw percentages.

Ethical Considerations: The study was conducted after obtaining ethical clearance from the Institutional Ethical Committee with the approval number IEC/MNRP/Prot/2019/007. Privacy and Confidentiality were ensured during the collection of data and patient counseling.

The data collected regarding the major symptoms of PCOS were tabulated in Table 5 and depicted in Fig. 4. In the present study, Rotterdam criteria were used for the diagnosis of PCOS in which irregular menses (oligoovulation, anovulation) and hyper-androgenism (hirsutism) were considered. Out of 805 subjects, a total of 114 subjects in the 3 different age groups were found to have Oligo-ovulation. The results are tabulated in Table 6 and depicted in Fig. 5.

The age-old saying “Early to bed and early to rise”, if followed, can be a gold standard preventive for Polycystic Ovarian Syndrome. 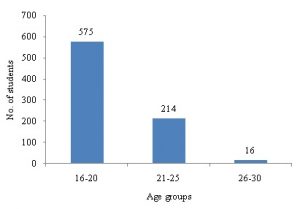 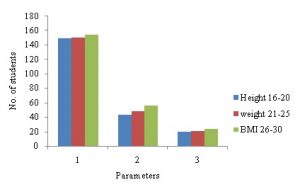 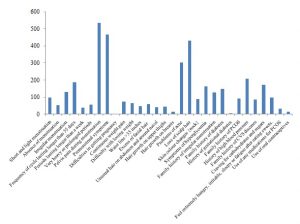 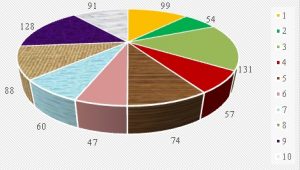 FIG. 4: TOTAL NO. OF SUBJECTS HAVING MAJOR PCOS SYMPTOMS 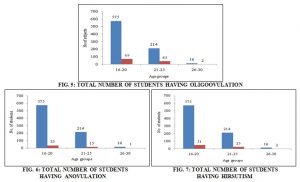 CONCLUSION: Polycystic ovarian syndrome is a major burning issue among adolescent females and adulthood. The crude prevalence rate determined from this study was 30%.

The results of our study show that very few of the young women know what actually this disease is and what are the earliest symptoms that should alarm them to consult a physician. Subjects identified with PCOS symptoms, we advise them to consult gynaecologists and early recognition, accompanied by prompt treatment with the medications to treat presenting symptoms.

Prevention is better than cure.

Stay strong because you’re worth it!!!!!!