A STUDY ON IN VITRO ANTIBACTERIAL ACTIVITY OF FICUS BENGALENSIS LINN. ON DENTAL CARIES PATHOGENS STREPTOCOCCUS MUTANS AND ACTINOMYCES VISCOSUS

A STUDY ON IN VITRO ANTIBACTERIAL ACTIVITY OF FICUS BENGALENSIS LINN. ON DENTAL CARIES PATHOGENS STREPTOCOCCUS MUTANS AND ACTINOMYCES VISCOSUS

The aerial roots of Ficus bengalensis Linn. were collected in and around Chennai, Tamilnadu, India  They were washed, shade dried and were ground into powder.  The powder was extracted with chloroform, petroleum ether, methanol and hexane. The antibacterial screening of the extracts was carried out by determining the zone of inhibition using disc diffusion method. The strains were grown to logarithmic phase in BHI broth and the inoculum was prepared by adjusting the turbidity of bacterial suspension to 0.5 McFarland’s tube. The dried extracts was dissolved in 10% Dimethyl sulphoxide (DMSO) in required concentration. The sterile discs were impregnated with 20 μl of extract. The extract discs were placed on BHI agar plates, which were previously inoculated with test strains and incubated at 37oC for 24 hours. Ampicillin disc (10μg) and 10% DMSO impregnated discs were used as positive and negative controls respectively and the zones of inhibition were recorded. The Minimum inhibitory concentration was determined by agar dilution method. The results of the present study showed that the methanol and chloroform extracts of Ficus bengalensis Linn. have activity against both Streptococcus mutans and Actinomyces viscosus. From the present study it is concluded that Ficus bengalensis Linn. extracts can be used as an effective antibacterial agent against dental caries.

INTRODUCTION: Dental caries is the main oral health problem in both the developed and developing countries and it affects 60-90% of school aged children and adults 1. In India, children comprise 40% of a rapidly growing population. The prevalence of dental caries varies from 33.7%-90% in children population and is increasing at an alarming rate 2.

Streptococcus mutans is considered to be an important cariogenic bacterium. It has the ability to adhere and colonise the tooth surface to form dental plaque. Further they can metabolise the simple sugars to develop dental caries 3.

They colonize the host after the first tooth erupts, and their preferential colonization site is the teeth 4.

Actinomyces viscosus, is a filamentous gram positive bacteria and is the primary coloniser on the tooth surface 5. It is considered to be involved in root caries.

A. viscosus of root caries origin synthesize large quantities of glycogen and subsequently degrade this stored polymer slowly with acid production, at acidic pH levels, may play an important role in the root caries process 6.

Medicinal plants are still the source of maintaining the oral hygiene in villages. Many plants have been reported to be used traditionally for oral care 7. Ficus bengalensis Linn (Family-Moraceae), commonly known as Banyan tree is known for its branches and aerial roots. It is a large evergreen tree distributed all over India from sub Himalayan region and in the deciduous forest of Deccan and south India 8. It is used in Ayurveda for treatment of diarrhoea, piles, teeth and skin disorders 9, The twigs of tree is used as tooth brush traditionally in many parts of south India 10.

The present research work has been conducted to study the in vitro antibacterial activity of Ficus bengalensis Linn. on oral pathogens Streptococcus mutans and Actinomyces viscosus.

Preparation of extract: The plant material was washed and shade dried. The dried material was coarsely powdered and was stored in an air tight container for further use. 100 g of powder was extracted with chloroform, petroleum ether, methanol and hexane for 48 hours in a soxhlet apparatus. The extract was then concentrated with rotary evaporator under reduced pressure. The dried extract was weighed and the percentage yield of the extracts was calculated.

The disc impregnated with 20µl of 10% DMSO and ampicillin disc (10μg) were used as negative and positive control respectively. The agar plates were observed for zones of inhibition around the disc and the diameter of zone of inhibition is measured.

After the plates were prepared a loop full of the standardized bacterial cultures were inoculated and the plates were incubated at 37oC and 30oC for S. mutans and A. viscosus respectively for 24 hours. Growth of organisms on each concentration were checked to determine the minimum concentration that inhibits growth of test organism.

RESULTS AND DISCUSSION: When percentage yield of extracts was compared for various solvents, it was found that it was better for methanol and chloroform than the other two solvents (Table 1).

TABLE 1: PERCENTAGE YIELD OF THE EXTRACTS FOR VARIOUS SOLVENTS

The results of the present study showed that the methanol and chloroform extracts of Ficus bengalensis Linn. have activity against both Streptococcus mutans and Actinomyces viscosus.

TABLE 2: ZONE OF INHIBITION BY VARIOUS EXTRACTS AGAINST STREPTOCOCCUS MUTANS 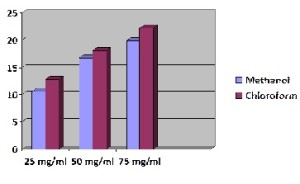 FIGURE 1: COMPARISON OF THE DIAMETER OF ZONE OF INHIBITION FOR METHANOL AND CHLOROFORM EXTRACTS AGAINST STREPTOCOCCUS MUTANS

TABLE 3: ZONE OF INHIBITION BY VARIOUS EXTRACTS AGAINST ACTINOMYCES VISCOSUS

The present study has revealed that Ficus bengalensis Linn. exhibits antibacterial activity with special reference to S. mutans and A. viscosus. 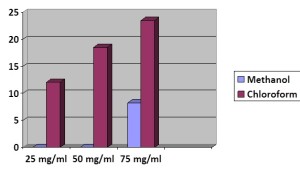 FIGURE 2: COMPARISON OF THE DIAMETER OF ZONE OF INHIBITION FOR METHANOL AND CHLOROFORM EXTRACTS AGAINST ACTINOMYCES VISCOSUS

ACKNOWLEDGEMENTS: We thank Prof. J. Mala, Chairperson, Tagore group of Colleges, for providing necessary facilities for the present study. We are thankful to Dr. T. N. Swaminathan, Advisor and Dr. Chitra R. Chandran, Principal, Tagore Dental College and Hospital for their kind support and encouragement. We would like to place in our record the help rendered by Mr. R. Hariharan, Lab technician, for his technical support throughout this study.