A STUDY ON PHYSICAL, CHEMICAL, AND ANTIOXIDANT PROPERTIES OF ESSENTIAL OIL SEPARATED FROM FRESH BERRIES OF CINNAMOMUM RIPARIUM BY STEAM DISTILLATION TECHNIQUE

A STUDY ON PHYSICAL, CHEMICAL, AND ANTIOXIDANT PROPERTIES OF ESSENTIAL OIL SEPARATED FROM FRESH BERRIES OF CINNAMOMUM RIPARIUM BY STEAM DISTILLATION TECHNIQUE

ABSTRACT: Cinnamomum riparium Gamble belongs to the family Lauraceae is a red listed species by the International Union for Conservation of Nature (IUCN). It is a tree growing in evergreen forests and traditionally used for treating conditions like wound healing, fever, intestinal worms, headache, inflammations, menstrual problems etc. According to tribal’s, this activity is mainly due to the volatile oil present in it. But as per published reports much works have not been carried out so far using its volatile oil. Hence it was thought worth to do the research work on this plant. Berries were collected from Paniyeli poru, near Periyar river, Ernakulam District, latitude 10.1720° N and longitude76.5959° E Kerala, India. Berry essential oil was separated by steam distillation technique by using a Clevenger trap apparatus. Separated berry essential oil was used for evaluating the physical and chemical properties including therapeutic activity (antioxidant activity) using DPPH scavenging assays. The berry oil exhibited 76.45% of antioxidant activity. The oil was subjected to GC-MS analysis. The main constituents present in the berry oil were γ–elemene, 1,3-benzodioxol, eugenol  and caryophyllene. As it is a red listed plant it become very important to preserve the plant for further studies and for the future generations to make use of its valuable medicinal properties for the humanity. The present study gave a high degree of evidence and encouragements to demonstrate the plant’s promising health benefits.

INTRODUCTION: Cinnamomum is a large genus consisting of evergreen aromatic trees and shrubs belonging to the Laurel family, Lauraceous. The genus contains over 300 species, distributed in tropical and subtropical regions of America and Asia. Cinnamomum riparium Gamble growing along the streams in the Travancore hills, Coorg, Malappuram, Kannur and in Western Ghats has been traditionally used as a medicine.

Phytochemicals are naturally produced chemical compounds and reported to have various biological effects, such as ant mutagenic, ant carcinogenic, antioxidant, antimicrobial, and anti-inflammatory. Antioxidants are the chemical substances that reduce or prevent oxidation and have the ability to counteract the damaging effects of free radicals in tissues, and thus are believed to protect against cancer, heart disease and several other diseases. They scavenge radicals by inhibiting initiation and breaking of chain reaction, suppressing formation of free radicals by binding to the metal ions, reducing hydrogen peroxide, and quenching superoxide and singlet oxygen.1 The present study was done to explore the antioxidant activity from essential oils from the berries of Cinnamomum riparium

Fruit and Seed: Berries are green in color and turns to deep purple on ripening.2 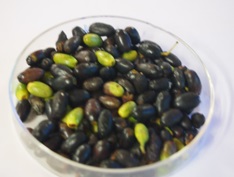 Volatile oil Extraction: 100grams of fresh berries were crushed and taken in 1L distillation flask, and socked over night with 500 ml of distilled water and Clevenger trap was connected and distilled by steam distillation. The essential oil and hydrosols were carefully separated till the Plant material was completely exhausted out with traces of essential oils. Calculated the percentage of yield of oil and was filled in amber colored glass container and kept for further studies. 3

Determination of Physical and Chemical Properties:

Physical Properties: Determination of color, odor, taste and appearance of berry essential oil was conducted. Microscopic studies of berries including seed were done.

Scavenging effect on 2, 2-diphenyl-1-picryl hydrazyl radical (DPPH): The free radical scavenging activity of berry oil from Cinnamomum riparium Gamble was studied by its ability to reduce the DPPH, a stable free radical that can donate an electron or hydrogen to DPPH, which can react with it and thereby bleach the DPPH absorption. DPPH is a purple colored dye having absorption maxima of 517 nm and upon reaction with a hydrogen donor the purple colour fades or disappears due to conversion of it to 2, 2- diphenyl-1-picryl hydrazine resulting in the decrease in absorbance.

3ml of sample kept in dark for 30 min and absorbance measured at 517nm by UV visible spectrophotometer. The blank used was a mixture of methanol and sample. The control was a mixture of DPPH radical solution in methanol. The percentage of inhibition of DPPH radical was calculated by comparing the results of the test with those of the control using the formula as indicated below 5, 6, 7

Ao = Absorbance of the sample

A1 = Absorbance of the blank

Yield of the Oil: The percentage yield of berry oil obtained is 1.2% v/w.

GC-MS Analysis: GC-MS analysis of berry oil of C. riparium was carried out. Showed twenty eight major compounds. The relative percentage of individual components was obtained from the % peak area from GC-MS data (Table 1). Graphical representation of major 7 compounds are given in Fig. 5.

TABLE 1: THE RELATIVE PERCENTAGE OF INDIVIDUAL COMPONENTS WAS OBTAINED FROM THE % PEAK AREA FROM GC-MS DATA 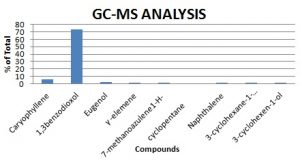 Antioxidant Study: DPPH radical Scavenging Assay: The scavenging activity of berry oil was performed as per the accepted method. The berry oil exhibited 76.45% of antioxidant activity.

CONCLUSION: As the plant is in the red list of IUCN it is our responsibility to protect the plant for the future. The present study revealed its chemical and therapeutic properties. The research should be entertained on this plant in various dimensions. The continuation research work on the same plant is on pipeline with me.

ACKNOWLEDGEMENT: I am thankful to Dr. Mathew Dan, Jawaharlal Nehru Tropical Botanic Garden and Research Institute (JNTBGRI), Palode, Trivandrum, Kerala, India to authentify Cinnamomum riparium. I extend my gratitude to my professional Assistant Mr. Arun Ravi, Research assistant, Athachi research foundation (International) for assisting me to carry out the study.  I am thankful to Andrea Butje, Director of Aroma head Institute, Florida, USA for her constant inspiration and motivation of my work.