ABSTRACT: Introduction: Schizophrenia is a chronic and debilitating psychiatric illness affecting around 0.4% to 1.4% of people at some point in their life. Early onset and the chronic course make schizophrenia a worrying disease. Prescribing pattern in Schizophrenia has seen a significant shift in the last two decades, from the first generation to second-generation antipsychotics. This study was carried out to analyze the pattern of antipsychotic drug utilization in patients of schizophrenia presenting at an outpatient department of a tertiary hospital. Materials and Methods: A cross-sectional observational study was conducted at the psychiatry outpatient department of a tertiary care hospital for six months. Diagnosis of Schizophrenia was made according to DSM - 5 criteria. Prescriptions were analyzed for demographic details, and the psychotropic prescribing pattern was studied using WHO indicators. Results: Amongst 104 prescriptions, 59.61% were males, and 68.20% of study subjects were below 40 years. 95.96% prescriptions were of atypical antipsychotics, Risperidone being the most commonly prescribed (52.88%), followed by Olanzapine (28.84%). Antipsychotic polypharmacy was noted in 19.23% of the prescriptions. Concomitant anticholinergics were used in 64.42%. Majority of the prescriptions were written in generic names. Risperidone which was used often in the study is included in the NLEM 2015 of India. Conclusions: Socio-demographic aspects of schizophrenia patients showed that the disease is more prevalent in males and people under 40 years age. Anticholinergic use is normally recommended only in select patients, in contrast to the current study population which had several of the patients on it.

INTRODUCTION: Schizophrenia is one of the most common psychiatric disorders, estimated to affect 0.4% to 1.4% 1, 2 of the population. It has a mean annual incidence of 11-16 per 100,000 1, 3. It affects men and women equally; however, there is an earlier onset in males 4.

Early onset and the chronic course make schizophrenia a worrying disease. Timely treatment reduces the morbidity and mortality of the disease. Advances in psychopharmacology have revolutionized the practice of psychiatry. Antipsychotic medications are primarily indicated for the treatment of schizophrenia and other psychotic disorders.

The burden of side effects associated with FGAs, debilitating extrapyramidal side effects (EPSEs) in particular, led to the introduction of the SGA medications in the 1990s 5. A prescription based survey is considered to be one of the most effective methods to assess and evaluate the prescribing attitude of physician 6. Drug utilization focuses on factors related to prescribing, dispensing, administering and taking of medication and its associated events. Patient files and computer registries are widely used as instruments for collecting information on drugs 7. It plays a key role in helping the healthcare system to understand, interpret and improve the prescription, administration, and use of medications whose principal aim is to facilitate the rational use of drugs 8. Hence, the present study was carried out to observe the prescribing pattern of antipsychotics in tertiary care hospital, assess the rationality of the prescriptions and the prevalence of antipsychotic usage in the community.

MATERIALS AND METHODS: This was a cross-sectional observational study which was carried out over six months (January 2018 to June 2018) at the Psychiatry outpatient department at Gitam Institute of Medical Sciences and Research Hospital, Visakhapatnam, Andhra Pradesh. After approval GIMSR/Adm/Ethics/approval/14/2017 from the Institutional Ethics Committee, patients attending psychiatry outpatient department during the study period and diagnosed as schizophrenia according to DSM - 5 criteria were identified, and their drug prescribing pattern was studied. Prescriptions of patients of both sexes and all ages, suffering from schizophrenia and started on at least one antipsychotic drug were included in the study.

Patients of epilepsy, suicidal tendencies, mental retardation, substance abuse, patients who were pregnant or lactating, and cases where the diagnosis was uncertain were excluded from the study. The diagnosis was made according to the Diagnostic and Statistical Manual of Mental Disorders, fifth edition, (DSM 5) criteria 9. A pre-designed and pre-tested proforma was used to collect the required information. Patient-related information (age, sex, diagnosis) and drug-related information (name of the drug, dosage form, and route of administration) were recorded. WHO guidelines were taken into consideration for evaluating drug use indicators 10, 11. Each prescription given to the patient was analyzed according to the World Health Organization (WHO) core prescribing indicators. To preclude any potential bias, the disclosure of the name of the responder was made optional. The obtained data were analyzed by using MS excel 2007, and the findings were summarized by using tables and diagrams.

RESULTS: Table 1 represents the socio-demographic profile of participants. Of the total 104 cases analyzed, 59.61% were males, and 68.20% were below 40 years of age. Among all the antipsychotic drugs, Risperidone was the most commonly prescribed antipsychotic drug (52.88%) Table 2.

Fig. 1 represents that the majority of the study subjects were prescribed atypical antipsychotic drugs. Regarding prescription pattern, monotherapy (80.76%) was more preferred than combination therapy in the present study Fig. 2. Out of 20 patients receiving multiple antipsychotics during the study period, 80% received more than one atypical antipsychotic drugs Fig. 3. Fig. 4 showing concomitant medications prescribed with Antipsychotics, shows that 64.42% of study subjects were also prescribed Anticholinergic drugs. The ATC coding, calculation of DDD, PDD and PDD to DDD ratios were summarized in Table 3. By WHO core prescribing indicators, the present study results observed that the average number of drugs per prescription was 2.23. The percentage of antipsychotic drugs prescribed from the national list of essential medicines (2015) was 42.85% Table 4. 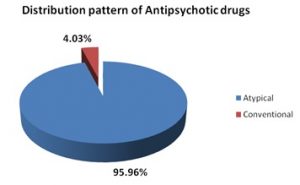 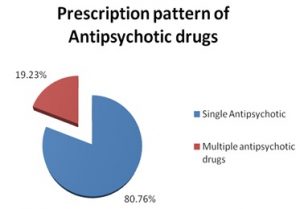 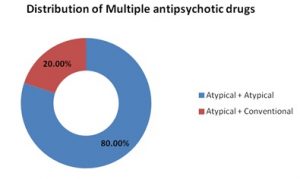 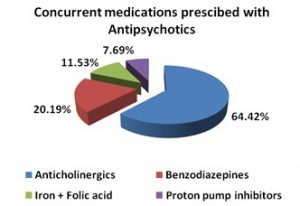 TABLE 4: WHO CORE PRESCRIBING INDICATORS AS ASSESSED FROM THE PRESCRIPTIONS

DISCUSSION: Drug utilization focuses on factors relating to prescribing, dispensing, administering and taking of medication, and its associated events. Patient files and computer registries are widely used as instruments for collecting information on drug 7. It plays a key role in helping the healthcare system to understand, interpret and improve the prescription, administration, and use of medications whose principal aim is to facilitate rational use of drugs 8.

Socio-Demographic Profile: In our study of 104 schizophrenia patients 59.61% were males and 40.39% females. The male prevalence identified in this study was similar to many other studies 12-14. However, this finding is different from a study done in Gujarat by Galani VJ et al., which showed that females and males affected by schizophrenia were almost equal to 15. 68.20% of schizophrenia patients were below 40 years, and 31.80% were above 40 years in the present study. In a different study Ali A reported the peak age of onset of schizophrenia as 15-30 years 16. Tandon et al., reported that the illness appeared earlier in men, usually in the early twenties, and that women were affected in the twenties to early thirties 17, which is a similar finding in our study.

Depot injections of risperidone and olanzapine were used very minimally in the study (1.92%). Depot preparations help to manage the patient non-adherence 25 and should be considered more commonly in the management of Schizophrenia patients.

WHO Prescribing Indicators: Average number of drugs per prescription was 2.23 which was similar to studies conducted by Paul et al. and Rode SB et.al, where the average drug per prescription was 2.2 and 2.1 respectively 26, 27. 74% of the prescriptions in the study were written by the generic name of the drug. 42.85% of patients received antipsychotics which were in the National list of essential medicines (NLEM) 2015. A study by Banerjee et al., noted only 28.6% of drugs used from NLEM list 28. Fixed-dose combinations were not used in the study. 74% of prescriptions were written in generic name. Risperidone which was used more in the study is included in the NLEM 2015 of India.

CONCLUSION: The present study has been undertaken to assess the pattern of usage of antipsychotic medications in schizophrenia, which will assist in ensuring rational drug therapy and hence reduce the occurrence of adverse effects of drugs. The present study observed that atypical antipsychotics were more commonly prescribed than conventional drugs. Anticholinergic drugs were prescribed in high number even with atypical antipsychotics which claim to have less EPSEs when compared to conventional drugs. Clinicians should be aware of the adverse effects of long term use of anticholinergics, and the same should be limited to the patients who develop EPSEs despite minimal effective doses and trial of a different antipsychotic. Majority of the prescriptions were written in the generic name which is a positive prescribing factor, given the pressure practitioners face in prescribing selective medication brands. This study can provide an outline for rational prescribing practice and help in further improvement of drug prescribing patterns. Further research is essential in this direction to improve prescribing practice and to establish and standardize the treatment of schizophrenia.

ACKNOWLEDGEMENT: Authors are thankful to GITAM Institute of Medical Sciences and Research, Visakhapatnam for providing us the necessary facilities for carrying out the study.