A STUDY ON “SANJEEVANI” (S. BRYOPTERIS) IN COMPARISON WITH ITS MARKET ADULTERANT S. INVOLVENS

A STUDY ON “SANJEEVANI” (S. BRYOPTERIS) IN COMPARISON WITH ITS MARKET ADULTERANT S. INVOLVENS

ABSTRACT: Many species of the genus Selaginella P. Bauev. (family: Selaginellaceae) are used as traditional medicine. In India, S. involvens (Sw.) Spring and S. bryopteris (L) Bak are used for medical purposes. In some works, these two species have been treated as resurrection plants or ‘Sanjeevani’. These plants have considerable morphological similarity which can create confusion regarding the exact plant used as medicine by traditional practitioners. The present study focuses on the comparison of both species for confirming their identity as two distinct species and their potential as medicinal plants. They were compared for morphological and anatomical characters, megaspore ornamentation (SEM analysis) and phytochemical analysis (HPTLC of bioflavonoids, amentoflavone). Morphologically S. bryopteris appears to be a miniature form of S. involvens. Anatomically they differ in the stelar region with differences in the position and number of protoxylem groups and the shape of the vascular region. The general appearance of the megaspore and ornamentation of the spore wall had significant differences. A prominent difference was observed in the sizes of their spores too. The HPTLC fingerprint of the samples tested was also different indicating their existence as two species. The presence and quantity of amentoflavone in both samples also helped to confirm their potential as two distinct medicinal plants.

INTRODUCTION: Family Selaginellaceae Willk. belonging to Lycophytes consists of about 55 species in India 1. The members are small terrestrial herbs, and the majority occupy moist shady places. A noteworthy feature of some members of this family is drought tolerance – they appear dry during desiccation, but regain their fresh green appearance in presence of moisture earning their place among resurrection plants. Selaginella species are known for their similarity in appearance.

Their differentiation requires study of their minute morphological characteristics using microscopes. This makes their identification difficult on the forest floors. The people of many forest-dwelling tribes in India extensively use different species of Selaginella to cure various ailments 2.

Various types of bioactive compounds have been identified in different species of Selaginella, which includes alkaloids, phenols, steroids, flavonoids, and terpenoids 3. The flavonoids are the major compounds isolated from these species. The bioflavonoids like amentoflavone, ginkgetin, isocryptomerin, and robustaflavone have shown several biological activities in experimental models 4. Studies on Selaginella species have also revealed the presence of therapeutically important compounds 4-6.

The potential of Selaginella as antioxidant 7, anti-cancer agent 8, antiviral agent 9 and antidepressant 10 were also investigated. Experimental data was unavailable for six species of Selaginella (S. involvens, S. kraussiana, S. repanda, S. rupestris and S. wildenowii), which were included in the database on Indian medicinal plants prepared by FRLHT, Bangalore 11.

In the present work, S. bryopteris is compared with S. involvens for their therapeutic value. Taxonomically these are treated as two different species, but both have striking morphological similarities and, some people also use the common name ‘Sanjeevani’ or resurrection plant for both. In Madhya Pradesh, S. bryopteris is traditionally used as a strength tonic by members of the Gond tribes 11.

The women in some tribes of the Bastar region of Chattishgarh use dried powders of this herb to treat gynecological problems like menstrual irregularities and leucorrhoea and also to minimize labor pain 12. Herb paste is taken orally by the local indigenous people of Songhai and Sonbhadra.

It helps to cure beri-beri and dysentery, and when given with cow’s milk, it helps for rejuvenation 13. S. involvens is used traditionally against amenorrhoea 14. S. bryopteris is locally available in markets and is known as ‘Sanjiwani Buti’, ‘Mrit Sanjeevani’, ‘Pathar Chatti’, ‘Sajivan’ etc. 15 S. involvens is also available in markets under the name ‘Sanjeevani’. This mislabelling may not be a problem for their aesthetic uses, but this confusion may limit realizing the full potential of their medical uses.

In the present study, we have compared the morphology, anatomy of the stem, megaspore SEM analysis, and the HPTLC fingerprint of amentoflavone of the two species in order to eliminate the taxonomic dispute existing within them and thereby enabling the exact plant utilization.

Materials: The dried plant S. bryopteris was purchased from a local market in Maharashtra, and S. involvens was freshly collected from Idukki. The plants were identified using relevant literature and type materials. S. involvens (Voucher No: 33) and S. bryopteris (Voucher No: 169), were kept as herbarium in the lab, plant parts were stored for SEM study and molecular sequencing.

Anatomical Study of the Plants: The fresh stem of S. involvens and the stem of S. bryopteris were hand sectioned for the anatomical comparison. Rhizophores of both the species were poorly developed and hence not considered for this study.

SEM Analysis of the megaspore: The micro sculpture of the megaspore surface was studied using a Scanning Electron Microscope (SEM). For SEM analysis the spores were placed on adhesive double-sided tape, affixed to an aluminium stub and coated with gold-palladium. The megaspores were examined for microstructures under suitable magnification using an SEM-EDAX: Jeol 6390LV microscope.

TLC aluminium sheets pre-coated with silica gel plates of size 5 × 10 cm were used. Sample extracts were spotted on TLC plates in the form of narrow bands of 8 mm at a distance of 10 mm from the bottom. 5 μl of the methanolic extract of the sample was applied under a continuous dry stream of nitrogen gas. The development of spotted plates was done using mobile phase, Chloroform: Acetone: Formic acid (7.5:1.65: 0.85).

Linear ascending development of TLC plate was performed in a glass twin trough glass chamber (20 × 10 cm) pre-saturated with 10 ml of the same solvent system. The chamber saturation time was 30 minutes at room temperature. The plate was developed to a distance of 80 mm from the point of the sample application. The plate was then dried, and the chromatogram was viewed under 254 nm and 366 nm to visualize the phytochemical constituents. The digital densitometric scan was done with Camag TLC scanner 3, operated by win CATS software, using 254 nm and 366 nm. For derivatizing, Anisaldehyde Sulphuric acid reagent was used. These plates were then photographed under UV 366 nm after derivatization.

Selaginella involvens: Xerophytic herb, 10 - 45 cm high, ascending with prostrate base. They branched the upper portion with an unbranched base - branches flabellate. Rhizophores are confined to the basal region.

Anatomy of the Stem: The C.S of the stem of both species Fig. 2. showed epidermis, cortex, and central stele. The outermost layer in both species is the epidermis and lacks stomata. Cortex is present inner to the epidermis and comprises the major portion of the stem. It surrounds the stele and is layered. In S. involvens a single chlorenchyma layer may be seen and the remaining portion is completely sclerenchymatous. In S. bryopteris, epidermis is followed by cortex with 1-2 layers of chlorenchyma followed by sclerenchyma layers and parenchyma layers.  A centrally located stele is connected to the cortex with the help of many long, radially elongated cells called trabeculae. The stele is separated from the cortex by air space. Stelar area is monostelic in condition with protostele in both plants. The solid central core of the xylem is surrounded by phloem. Xylem is exarch in condition.

Megaspore SEM Analysis: The scanning electron microscopic study of the megaspores of two Selaginella species was carried out in Fig: 3. 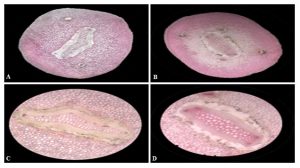 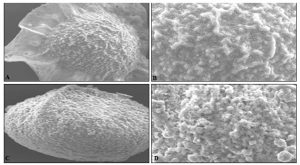 TABLE 1: COMPARISON OF MEGASPORE OF THE TWO SPECIES OF SELAGINELLA

Amentoflavone HPTLC Fingerprint: Amento-flavone, a bioflavonoid known for various pharmacological potential, was identified and quantified using HPTLC in the two plant species under investigation. For this study standard amentoflavone was used to run HPTLC.

Selaginella involvens: The extract of S. involvens showed six peaks, of which the peak corresponding to Rf value 0.40 was the highest and prominent when compared to the other five peaks Table 3, Fig. 4. 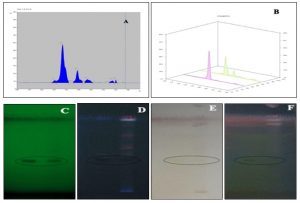 Selaginella Bryopteris: The densitogram of S. bryopteris extract also revealed the presence of six peaks, and the predominant single peak corresponds to Rf value 0.42 Table 4, Fig. 5. The extract of the whole plant was taken for the two species under study. The standard showed a single peak at Rf 0.40, with an area of 8640.7 Table 2.

The predominant peak of S. involvens and S. bryopteris at Rf values 0.40 to 0.42 respectively confirmed the presence of amentoflavone within the samples. But the remaining 5 peaks of the two species appeared different and indicated the difference in their phytochemical constituents.

Quantification of amentoflavone in the samples tested was done using the peak area from the HPTLC densitogram. The amount of amento-flavone present in S. involvens was found to be 174 ppm, and that of S. bryopteris was 134 ppm.

DISCUSSION: Traditional usage of plants for various ailments sometimes creates confusion regarding the identity of plants used. If the similar-looking plants are not scientifically identified and validated, the above problem persists. The ecology and location of the two species were different. S. involvens is a South Indian species and found within humid regions of high altitude, but S. bryopteris is found on dry and barren rocks lit with sunshine. In India, it is mainly located in the states of Madhya Pradesh, Uttar Pradesh, Bihar, Orissa, Tamil Nadu, and Maharashtra.

One of the noteworthy differences between the two samples is their stem length. S. bryopteris with stem length of about 5 – 25 cm appeared as a miniature form of S. involvens. The branching pattern and position of rhizophores do not have much difference. When the spores were closely observed for these heterosporous members, the size of both microspore and megaspores were greater in S. involvens than the other. The anatomy of the stem was similar. The shape of the xylem was very different in the two species, which was prominent too. Dense sclerenchyma was present in both the samples observed. Scanning electron microscopic analysis of the megaspores indicated the differences in the spore ornamentation of the two species. In general appearance, S. involvens spore was winged while that of S. bryopteris had no wings. Spore colour was yellow for S. bryopteris while it was dark brown for the other. Both differed in micro sculpture also. Spore wall appeared warty for S. involvens while it was verrucoid for the other. The attributes of the spores observed during this work were compared with some earlier works 16, 17. Both the tested samples showed the presence of amentoflavone. The content was highest for S. involvens with 174 ppm. In one of the previous HPLC studies18, the amount of amentoflavone from S. involvens was found to be 2.15 ppm. The HPTLC amentoflavone fingerprint indicated a marked difference between the two species. Even if both had six peaks, all were different for the two. Presence of amentoflavone was confirmed by the presence of a major peak at Rf value ranging 0.40 to 0.42 in both samples, but the peak area was different. The amount of amentoflavone was higher in S. involvens than in S. bryopteris. When the remaining five peaks were observed, their phytochemical composition was found different, corresponding to the difference in peaks. The therapeutic effects of amentoflavone was confirmed by previous studies which include, anti-inflammation and anti-oxidation 19, 20, anti-tumor 21, anti-diabetes 22, antiviral 23, antifungal 24 and  anti-senescence 25 properties. The presence of amentoflavone in the two species of Selaginella under study proved the medicinal properties of the two species.

CONCLUSION: In this study, the presence of medicinally important bioflavonoid – amentoflavone was identified and quantified in the two plant species tested. This scientifically validates their use as medicine. The amount of amentoflavone with values of 174 and 134 ppm for S. involvens and S. bryopteris respectively confirm the plants to be natural sources of amentoflavone.

The morphological and ecological differences and the differences in their microspores and megaspores and HPTLC fingerprint differences indicate that both are different species with medical potential. Research on Selaginella species for isolation, identification, quantification, and commercial extraction of their bioactive compounds should be carried out, which would be a welcome addition to the body of knowledge in our medical field.

ACKNOWLEDGEMENT: We sincerely acknowledge the Department of Science and Technology, Govt. of India (File No: EMR/ 000253/2017) for the financial assistance.

CONFLICTS OF INTEREST: There is no conflict of interest among all the authors in this study.