ABSTRACT: Stress exerts detrimental effects on several cellular functions through impairment of antioxidant defences, leading to oxidative damage and onset of many cardiovascular and neurological diseases. The restraint stress or immobilization stress is widely accepted model to induce emotional stress and the deleterious effect of restraint stress on the biological system is well documented. The precise molecular and cellular events induced by restraint stress needs to be evaluated.

Aim: To determine the effect of sub-acute restraint stress on antioxidant status in rats.

Methodology:  Adult male Wistar albino rats weighing about 180-200g were taken for the study and was divided into two groups - Control group (n=6) and Sub-acute restraint stress group (n=6). Restraint stress were given in wire mesh restrainers for 15 days (6 hrs/ day), the blood from the jugular vein was collected for estimation of antioxidant status (SOD, GPx, CAT, Vit C and Vit E) in rats.

Conclusion: The exposure to repeated stress induces oxidative stress. These alterations may contribute to the deleterious effects observed after restraint stress.

INTRODUCTION:The adaptation response to stress would be different according to the type, duration, intensity and history of the stress 11, 9, 25, 27.  Repeated stress causes a disturbed homeostasis due to internal or external environment like physical or psychological stimuli known as stressors.

The mechanisms underlying stress-induced tissue damage are not yet fully understood. But, increasing evidence has implied that the production of free radicals plays a critical role in these processes 14, 32.

Earlier studies have reported that exposure to repeated stress could stimulate many mechanisms leading to an increase in the production of oxygen free radicals. One of the reasons for the stress-induced development of free radicals may be the elevation of hydroxyl radical (OH¯), superoxide anion (O2¯), hydrogen peroxide (H2O2) and nitric oxide (NO) production.

These species may interact with oxygen generating reactive oxygen species (ROS).  ROS are believed to be involved in oxidative damages and these substances can directly damage the cellular proteins, DNA and lipids and may cause the onset of many cardiovascular and neurological diseases.12,15

METHODOLOGY: Adult male Wistar rats (12) weighing 150-180g were taken for this study. The institutional animal ethical committee approval was obtained. The rats were maintained (3rats/cage) under 12h: 12h light and dark cycle and were provided with food and water ad libitum. The rats were divided into 2 groups (a) Control group (6), and (b) restraint stress group (6). The control group were kept in home cage without any disturbance, whereas rats in stress group were restrained for 6hours/day for 15 days by placing each rat in a wire mesh cage 32. After 15 days of restraint stress the blood samples were collected from jugular vein for estimating antioxidant status of animals. The enzymatic and non-enzymatic activity like Lipid peroxidase (LPO), (OhKawa et al., 1979), Superoxide dismutase (SOD) (Marklund & Marklund - 1974), Glutathione peroxidase (GPx), (Rotruck et al., 1973), Catalase (Sinha 1972), Vitamin C (Omaye et al.,1979), Vitamin E (Desai 1984).

Procedure for estimating the Antioxidant levels:

RESULTS: All data were analyzed and expressed as the mean ± SE and by using students ‘t’ test were used to test the significant difference between mean values of different groups (fig. 1-3, table 1). 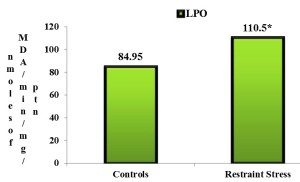 FIGURE 1: COMPARISON OF LPO LEVELS IN CONTROL AND RESTRAINT STRESS GROUP. There was a significant increase in LPO activity after restraint stress (P<0.05) compared to controls. 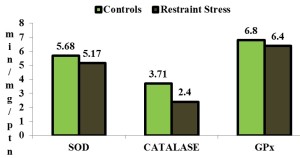 FIGURE 2: COMPARISON OF ENZYMATIC ANTI-OXIDANT LEVELS IN CONTROL AND RESTRAINT STRESS GROUP. The enzymatic activity of the SOD, CAT and GPx were significantly reduced (P<0.05) when compared to controls. 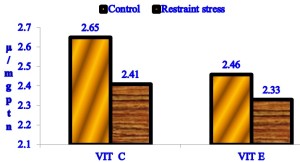 FIGURE 3: COMPARISON OF NON-ENZYMATIC ANTI-OXIDANT LEVELS IN CONTROL AND RESTRAINT STRESS GROUP. The non-enzymatic activity of the Vit C and Vit E were significantly reduced in restraint stress condition as (P<0.05) compared to controls.

DISCUSSION: Stress may also impair the antioxidant defence system, leading to oxidative damage, by changing the balance between oxidant and antioxidant factors. There is a change in lipid metabolism in restraint stress resulting in increase in LPO levels. Malondialdehyde is a susceptible indicator of lipid peroxidation and these generate a cascade producing LPO that causes a major damage in the mechanism of cell and even cell death 1, 18. The fact that restraint stress enhanced MDA levels are probably associated with increased free radical generation. Oxygen free radicals are extremely reactive and unstable, thus easily reacts with lipids, proteins, carbohydrates and DNA in the body 28. The repeated stress is capable of inducing reactive oxygen species.

The production of ROS is seen in variety of stress situation and the consequences of ROS formation depends upon the strength of the stress which causes the increasing level of antioxidant. A significant inhibition of SOD is induced by restraint stress that causes increasing the level of LPO under this stress condition 5.

Superoxide is dramatically increased during stressful condition. This superoxide is one of the main reactive oxygen species in the cell which are chemically reactive molecules containing oxygen also increased.  This significant decrease of SOD may result in damage to cell structures and thus causes oxidative stress.

The function of theSODisconverting superoxide radicals into hydrogen peroxide which is effective in ROS scavenging by the reaction of CAT and GPx. This combined form of enzymes produced hydrogen peroxide

The function of theSODisconverting superoxide radicals into hydrogen peroxide which is effective in ROS scavenging by the reaction of CAT and GPx. The combined form of CAT and GPx is produced hydrogen peroxide A significant inhibition of SOD is induced by restraint stress that causes increasing the level of LPO under this stress condition 5.

The decline in Catalase and GPx can be attributed to ineffective scavenging of H2O2 resulting in increasing H2O2 levels, which can react with O2 to give OH radical and thus increased LPO. Catalase requires NADPH for its inactive form 23. Vit. E and Vit. C have been shown to be an effective antioxidant inhibiting NO induced LPO 29.