INTRODUCTION: Pre-eclampsia is a multisystem disorder of unknown etiology, unique to pregnancy. Women with pre-eclampsia usually develop raised blood pressure and proteinuria, but the condition is also associated with abnormalities of the coagulation system, disturbed liver function, renal failure and cerebral ischemia 1. Preeclampsia may be placental in origin and may also be influenced by maternal factors such as obesity, diabetes, and preexisting hypertension 2. The details of pre­eclampsia are usually mentioned in the medical birth registry. The notification form may also hold information on specific symptoms of pre­eclampsia, such as hypertension induced by pregnancy, proteinuria and edema 3.

Eclampsia, the occurrence of one or more convulsions superimposed on the syndrome of preeclampsia, occurs less frequently, complicating between 1 in 100–1700 pregnancies in the developing world and about 1 in 2000 pregnancies in Europe and other developed countries 4.

Over the years, a lot of interest has been directed at studies on the role of serum uric acid, blood urea and serum creatinine in the pathogenesis of pregnant induced hypertension, such as preeclampsia.

Such Contradictory reports have encouraged us to undertake a detailed study on these aspects, with a desire to understand the underlying intricacies. The aim of the study was to measure and evaluate the serum uric acid, blood urea and serum creatinine levels in preeclampsia patients and normal pregnant women.

MATERIALS AND METHODS: 100 subjects selected in which 50 were preeclampsia cases and 50 normal pregnancy controls. 3ml of venous blood sample was collected in a plain tube. After centrifugation at 3000 rpm for 10 minutes, the serum samples were analyzed for renal parameters using standard kits. Serum uric acid levels were measured by colorimetric assay 5. Serum creatinine and urea levels were measured using standard procedures.6, 7

Statistical Analysis: The data were statistically analyzed by a Graph Pad Software using unpaired students t - test. The results were expressed in terms of Mean, Standard Deviation, and Confidence interval.  The two – tailed P values are provided in the table showing the results; P value of < 0.05 was considered statistically significant. 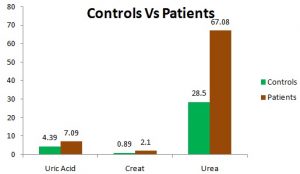 FIG.1: COMPARISON OF RENAL PARAMETERS OF CONTROLS AND PATIENTS

Similarly, with reference to the extent of blood urea or serum creatinine levels in preeclampsia, often differing results have been observed.

Furthermore, whether or not the elevated levels of serum uric acid (as those of the blood urea or serum Creatinine) can be taken as a predictive indicator for the pre-eclampsia disorder remains to be elucidated. For example, in several studies it was found that the extent of the elevation in serum uric acid level in pre-eclamptics was an indicator for the degree of severity of this disorder. 8-13, 15-17

Elevated serum uric acid levels have also been interpreted to act as an important cofactor involved in the pathogenesis and manifestation of pre-eclamptic disorder.14 Proteinuria rather than hypertension was observed. 8

One of the most commonly accepted explanations for elevated serum uric acid has been said to be increased reabsorption and decreased excretion of uric acid in proximal tubules, similar to the physiologic response to hypovolemia.18

On the basis of observed TOS (Total Oxidant Status) and TAS (Total Antioxidant Status) levels, it has been inferred that increased oxidative stress and antioxidative defence mechanisms may contribute to the disease process in preeclampsia.19

Recently, increased oxidative stress and formation of reactive oxygen species (ROS) have been proposed as another contributing source of hyperuricemia noted in preeclampsia apart from renal dysfunction.20

In addition, an elevated serum uric acid concentration may reflect impaired endothelial integrity, in which endothelial dependent vascular relaxation produced by nitric oxide (NO) is reduced.23

Uric acid thus may function as a marker of oxidative stress tissue injury dysfunction. During uncomplicated pregnancies serum uric acid concentrations decrease by about 25 % to 35 % in early pregnancy, but then increase throughout the pregnancy until towards the end of it when they approach non-pregnant levels.24

It has been proposed that these pregnancy mediated changes in serum uric acid are often the result of altered renal handling. Increased serum uric acid in preeclampsia is secondary to reduced renal urate clearance because of renal dysfunction.25 and also due to increased Xanthine Oxidase activity.20

It is also possible that increased serum uric acid values may indicate the presence of undiagnosed sub-clinical renal disease in some subjects and this may increase the risk for preeclampsia.

However, in several studies it was concluded that the measured elevated serum uric acid level can be taken as an unreliable indicator for development of hypertension.14, 15

Another review inferred that uric acid is not a consistent predictive factor for the development of preeclampsia, but its level generally increases once the disease manifests and plasma levels of uric acid may often correlate with disease severity.17

The differences in each of the mean serum uric acid or serum creatinine concentrations between the preeclampsia and the normotensives respectively were not statistically significant and that these parameters are of little value in the prediction of preeclampsia.16

Our present study is also in line with two earlier studies 16, 18 wherein small change in blood urea levels both in pre-eclamptics and normotensives are insignificant.

This is in line with an earlier study predicting that the changes in the plasma concentrations of serum uric acid can more prominently be correlated with the degree of this study examined both work and leisure-time activity levels, providing an opportunity to assess their independent and combined effects on the risk of preeclampsia.

CONCLUSION: The study  is concluded that the elevated uric acid levels alone does not predict and correlate with the severity of the preeclampsia but in combination with blood urea, serum creatinine levels may predict it. The serum uric levels may provide additional information which is helpful to predict the preeclampsia.