ABSTRACT: Renal stones disease is the most common disease of the urinary tract affecting about 10% of the global population. Renal stone disease is a common disorder that develops when the urine becomes overly saturated with certain microscopic substances that bind into hardened mineral deposits known as renal stones. The objective of our current study is to evaluate the total organic acids of urine of calcium oxalate stone formers and compare it with that of non stone formers, to investigate whether the difference between the property studied in two groups really exists or not. The study was conducted on 50 patients divided into two groups- Group I consist of 25 idiopathic patients having calcium oxalate renal stone i.e. stone formers (SF) and Group II consists of 25 controls i.e. non stone formers (NSF) having no clinical evidence of renal stones. Each patient and control collected a 24 h urine, which was kept unrefrigerated, using thymol as preservative. It was found from our studies that evaluation of Total organic acids can be used as a test to separate a SF from NSF.

INTRODUCTION: Urine is a very complex polyionic solution and contains various inhibitors and promoters of crystallization 1. Important ions and molecules in relation to renal stone formation are Ca2+,oxalate, phosphate, Na+, K+, H+, OH–, Mg2+, SO42– citrate, amino acids, glycolsamino-glycans (GAGs) etc 2. The loss of balance between the urinary promoters and inhibitors and super saturation of urine with stone forming ions has been suggested to increase the risk of stone formation more than disturbance in any single substance as renal stone formation is a multifactorial problem 3.

Kidney stones are solid crystals that are formed from dissolved minerals in urine, can be caused by both environmental and metabolic problems 4. Of all the renal stones, calcium oxalate and calcium phosphate stones account for almost 70% in economically developed countries 4. Renal stones can develop anywhere in urinary tract. Most of the patients had renal stones (66%), followed by ureteral stones (25%) followed by vesical and urethral stones (9%) 5.

All type of stones  are formed due to imbalance between fluid and certain wastes in urine causing a high concentration of stone forming salts i.e. calcium oxalate, calcium phosphate, uric acid and struvite 6. Renal stones may grow over months and even years before causing problem. Normally the stone that is very small in size will move through the urinary tract and pass out in the urine. Large stones do not always pass through and may require a procedure or surgery to remove them 7.

These stones can result in extreme pain, burning sensation during urination, blood in urine, can stop the flow of urine and in some cases may lead to high blood pressure 8 and increase the risk for coronary artery disease and diabetes mellitus 9. The renal stone oxalate production 14. Further, renal stones formation is a recurrent problem and around half of all people who previously had a kidney stone will develop another one within five years 10. The recurrence rate without preventive treatment is approximately 10% at 1 year, 33% at 5 years and 50% at 10 years 11. Another visible change was the variation in the gender of the affected people 12. Although in the beginning the disease was limited to men, now-a-days it also affects the women. Peak age of renal stone found in men is 30 years and women are 35-55 years 13. Incidence of formation of stones is 3 times higher in men than women. This is due to lower testosterone levels providing protection for women and children against developing oxalate stones, as testosterone may increase hepatic develop frequently in people with a family history of stones than in those without a family history 15.

Relative mobility of the ions present in the urine imparts conductance property to the urine. In our previous study, we had studied specific gravity, pH 16 and surface tension and viscosity 17. In the current paper, we will study total organic acids of urine of calcium oxalate stone formers and compare with that of non stone formers, to investigate whether the difference between two groups really exists or not so that a new simple method may be developed to distinguish the stone formers from non stone formers rather than the various imaging techniques used now-a-days 18. We present a study of 50 patients. Group I consist of 25 idiopathic patients of various ages and both sexes having Calcium oxalate renal stone disease i.e. stone formers (SF) and Group II consists of 25 controls i.e. non stone formers (NSF) with matched age and sex having no family history of kidney stone.

Preparation of Patients and Controls: Patients and controls were put on equal calorific diet/kg body weight and equal amount of water for 2 days. On third day, they were asked to collect 24 h urinary sample. 24 h collection is still the gold standard for metabolic evaluation in renal stone disease 19.

Collection of 24 h Urine: Each patient is provided with two 2.5 l collecting bottles and for urine preservation 10 ml of 5% thymol in isopropyl alcohol is added into each bottle. On the day of urine collection, patients were asked to empty the bladder completely upon awakening and discard this urine. This is the start date and time. Write it on the collection container. After that, all urine should be collected in the bottle (also during the night) for the next 24 h. Always store the collecting bottles in a cool place. The last urine collected should be that voided upon awakening the second day, at the same time as the start time 20.

Statistical Methods: Significance of mean value differences between the two groups i.e. Group-I and Group-II were tested using student t-test. The results of total organic acids of 24 h urinary sample in the two groups were shown in Table 2.

RESULTS AND DISCUSSION: The present study was conducted on 50 patients divided into two groups- Group I consist of 25 patients having calcium oxalate renal stone i.e. stone formers (SF) and Group II consists of 25 controls i.e. non stone formers (NSF). 24 h urine was collected from each patient and control. It was found during study that total organic acids of Group I range from 13.08 to 52.5 with a mean value of 33.481 ± 9.306 as shown in Fig. 1. 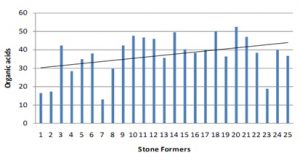 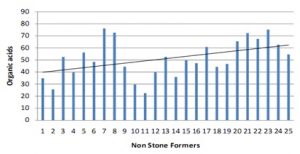 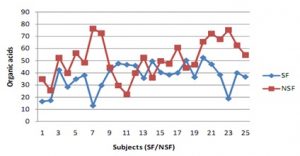 Citric acid is the most important inhibitor of stone formation. It inhibits stone formation by forming complex with calcium, thus reducing the concentration of calcium ions and inhibiting spontaneous nucleation and crystal growth.