INTRODUCTION: Antimicrobials are considered as the greatest discovery of twentieth century 1. They have been used since ages to treat life threatening infections. Evidence from studies of prescribing patterns suggests that antimicrobial agents’ usage has increased steadily however they are used in inappropriate ways 2.

This inappropriate prescribing practice can cause ineffective and unsafe drug treatment, worsening or prolonging of illness, adverse drug reaction and antimicrobial resistance 1. The appropriateness of antimicrobial treatment can be evaluated by using modified Kunin’s criteria 3 and method suggested by Gyssens et al 4.

The appropriate use of AMAs can be improved by various educational interventions. This includes distributing guidelines book, continued medical education (CME), awareness program, personal interviews and briefing, posters, frequent reminders by SMS and emails for encouragement.

The health care system provided by the Government is divided into Primary Health Centres, Urban Health Centres and Tertiary Health Care hospitals. Among them PHCs and UHCs usually cover the rural areas and the urban slum areas. A lot of studies have been done on usage of antimicrobial agents in tertiary health care hospitals. However, there are no studies done in PHCs and UHCs which cover rural and urban slum areas. Hence this study was designed to study the usage of antimicrobial agents at PHC and UHC and to evaluate the impact of educational intervention of AMA prescribing.

This study was an interventional, continuous, prospective and multicentre study which included 5 PHC and 5 UHCs which accounted to approximately 10% of the total 43 PHCs and 57 UHCs in Ahmedabad district. The study was carried out from September 2012 to June 2014 over a period of 22 months. Adult patients of either gender, who were willing to participate in the study, who gave informed consent and who were prescribed antimicrobial agents were included. Patients who were not willing to participate in the study and give informed consent and pregnant females were excluded. A prior permission was obtained from Chief District Health Officer (CDHO) for conducting the study at Primary Health Centres. To conduct study at Urban Health Centres permission was taken from Family Welfare Officer (FWO). Prior permission from Institutional Ethics Committee (IEC) of Civil Hospital, Ahmedabad was also obtained before the conduct of the study. As per the inclusion and exclusion criteria the patients were enrolled after taking written informed consent. The study was divided into 3 phases: pre-intervention, intervention and post-intervention phases.

ANOVA test with Tukey Kramer test. In all the statistical tests, P value <0.05 was considered significant.

As observed from Table 1, the gender ratio, weight and occupation of the patients were comparable in all the four groups. More than two-third of the patients belonged to poor socioeconomic class as per modified Kuppuswamy scale 5.

The most common chief complaint of the patients at PHCs and UHCs in both pre- and post-intervention phases was cough as shown in Fig. 1 and 2. 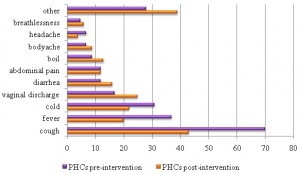 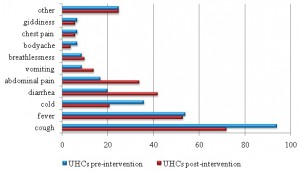 TABLE 2: INAPPROPRIATE USE OF ANTIMICROBIAL AGENTS

DISCUSSION: India is the country where the infectious disease burden is among the highest in the world but on the other hand reports have shown that AMA used to treat these infections are used inappropriately and irrationally. This has led to increased incidence of development of antimicrobial resistance 6. There are studies available regarding the usage of AMAs in tertiary health care hospitals, however there are lack of studies conducted in PHCs and UHCs which provide health care facilities to rural and urban slum areas respectively. This study was done to evaluate the use of AMAs and appropriateness of their use by using modified Kunin’s criteria 3 at PHCs and UHCs. Improvement in appropriateness of AMA prescription was also measured after educational interventions of distribution of booklet regarding AMA use in various infectious diseases and by making presentation in front of the prescribing physicians.

The age range of the patients was 41 to 60 years and 18 to 40 years at PHCs and UHCs respectively. The reason behind this finding may be our inclusion criteria to include the adult patients aged 18 years or more. Older patients have multiple etiologies of diseases and are usually admitted. Khan et al also showed that most patients were in the age group of 41 to 60 years 7. There was a little discrepancy in male:female ratio in our study at various sites. It might be because the flow of the patients at the study centre might vary on daily basis. Majority of the patients in our study belonged to low socioeconomic class which might be because PHCs and UHCs provide health services at negligible cost. Cough, fever, cold, abdominal pain, diarrhoea and vaginal discharge were the common complaints of the patients at all the centres.

All these complaints are clinical features of common infectious diseases like upper respiratory tract infection (URTI), gastroenteritis, vaginitis and malaria. Incidence of URTI is highest (18.8 billion in 2013) worldwide amongst acute disorders which is followed by diarrheal diseases (2.7 billion in 2013) 8. Laboratory investigations like haemoglobin level, PS for MP, rapid diagnostic test (RDT) for malaria and sputum for acid fast bacilli (AFB) were done in only few patients. Moreover the common diagnoses were URTI and gastroenteritis, which usually doesn’t compel the physician to go for any laboratory tests especially at PHCs and UHCs where there is lack of specific laboratory investigations.

The most common diagnosis was upper respiratory tract infection in pre- as well as post-intervention phase at PHCs and UHCs. Other common diagnoses were gastroenteritis, vaginitis, helminthiasis, boil, malaria, typhoid and chikunguniya. However, an Indian study done at a tertiary care teaching hospital had common diagnosis like febrile illness, gastroenteritis and malaria 9. This might be because complicated and serious patients are usually referred to a tertiary care hospital, whereas at PHCs and UHCs, the patients present with mild to moderate illness.

Most of the antimicrobial agents were prescribed singly in our study. More than 70% patients were treated with single AMA. Amane H and Kop P also showed similar results where single AMAs were prescribed to patients at a tertiary care hospital 10. Majority of the patients at PHCs and UHCs in our study were prescribed AMAs like metronidazole, amoxicillin, doxycycline, cotrimoxazole, norfloxacin and albendazole. The most commonly used AMAs in PHCs and UHCs were metronidazole and doxycycline respectively. Common conditions in this study were URTI and gastroenteritis which are usually viral in origin and self limiting 11, 12. If bacterial in origin, URTI in majority of the cases is treated by means of amoxicillin, cephalexin, doxycycline and azithromycin 13 and gastroenteritis by fluoroquinolones 14.

A Greek study at primary health care level showed that penicillins were the most common AMAs prescribed followed by cephalosporins, macrolides, quinolones, imidazoles, sulphonamides, lincozamides and antifungals 15. Kotwani A and Holloway K showed that most commonly used AMAs at outpatient department of public sector were amoxicillin, ofloxacin, ciprofloxacin, doxycycline and roxithromycin 16. The reason for use of such AMA may be the most common diagnosis which was URTI followed by gastroenteritis for which drugs like penicillins and fluoroquinolones are commonly prescribed. URTI and gastroenteritis are usually self-limiting. There is also lack of diagnostic facilities which help to arrive at more specific diagnosis about viral or bacterial in origin.

Very few patients in our study were prescribed 2 or more AMAs. Amane H and Kop P also showed that only 15.55% patients were prescribed 2 or more AMAs 10. Combinations of AMAs used at our setup were metronidazole and norfloxacin; albendazole and metronidazole; ofloxacin+ornidazole and clotrimazole; roxithromycin and framycetin; and cefixime and lumefantrine. Unnecessary multiple AMAs were used in our study where only one AMA would suffice. Use of metronidazole and norfloxacin concominantly is irrational, because they are used for the gastroenteritis which can be bacterial or amoebic dysentery that can be diagnosed and only one of the drugs could suffice. In majority of the cases a single patient doesn’t require antibacterial as well as antiamoebic drugs 17. However, most of the patients who were prescribed multiple antimicrobial in our study had more than one complaint like diarrhea and vaginitis; cough and boil; cough and vaginitis.

No FDCs of AMAs were prescribed at PHCs whereas few FDCs of AMAs were prescribed at UHCs. Most common FDC of AMA in our study was ofloxacin+ornidazole which was followed by amoxicillin+clavulanic acid and artimisinin-based combinations. FDCs of AMAs are not in government supply at PHCs which might be the reason for no prescription of FDC of AMAs there. Amoxicillin+clavulanic acid and artemisinin-bases combinations are rational FDCs which are included in essential medicines list by world health organisation 18.

Availability of irrational combination of ofloxacin+ornidazole 17 at UHCs is surprising and irrational. An Indian study showed most commonly used FDCs of AMAs were amoxicillin+clavulanic acid and ceftriaxone+sulbactam 7. Amane H and Kop P showed that commonly used irrational FDCs included Norfloxacin + tinidazole; ofloxacin + ornidazole; ciprofloxacin + tinidazole; gatifloxacin + ornidazole; amoxicillin + cloxacillin and ampicillin + cloxacillin 10. Almost all the patients were prescribed AMAs by oral route in our study. This finding might be because at the primary health care majority of the patients visit OPD and hence managed by oral medications moreover if required for admission they are referred to higher centres. Appropriateness of antimicrobial treatment was evaluated by modified Kunin’s criteria in our study. Antimicrobial treatment was appropriate in 12% and 6.67% patients at PHCs and UHCs respectively in pre-intervention phase. The appropriateness improved to 20% and 9.33% patients at PHCs and UHCs in post-intervention phase.

The most common inappropriateness in AMA prescriptions was duration of usage of AMA. Swindell PJ et al also have shown inappropriate duration of AMA usage as common occurrence 19. In more than 50% cases the choice of AMA used was inappropriate in pre-intervention phase. URTI and gastroenteritis are self limiting infections which do not need usage of AMAs and hence usage of AMAs for them is not justified in our study. Lack of knowledge and lack of availability of specific drugs at PHCs and UHCs might be the reason for this inappropriateness. Moreover lack of specific diagnostic facilities for specific infections has lead to improper diagnosis and hence inappropriate prescribing. A study in the western world by Willemsen et al observed that inappropriate choice and unjustified use of AMA is present only in 16% patients unlike Indian studies4.

CONCLUSION: Antimicrobial agents are commonly used at PHCs and UHCs. They are used empirically in majority of the cases. Trend to prescribe single AMA is common; however few patients were prescribed multiple AMAs. Irrational FDCs were prescribed only at UHCs. AMAs were used inappropriately especially choice and duration. However, route and dose were appropriate. Educational intervention improved choice as well as duration of antimicrobial use. Hence, proper diagnosis with the help of proper laboratory investigations and use of continuous medical education of the medical officer can lead to better and judicious use of AMAs.

ACKNOWLEDGEMENT: We are grateful to all the medical officers and staff of each study centre.