INTRODUCTION: Hypertension is the major public health problem causing high mortality and morbidity all over the world.

Effective control of blood pressure (BP) can bring down the disastrous consequences of hypertension significantly. It has been shown that even a slight decrease of BP of 2 mmHg reduces the risk of stroke by 15% and the risk of coronary artery disease by 6% 1.

However, the BP control rate remains suboptimal not only in developing countries like India but also elsewhere. Primary care physicians (PCPs) have a major role in diagnosing and managing hyper-tension globally because patients often approach them first for any ailment. Hence, it is essential that PCPs should be aware of the diagnosis, recent development in pharmacotherapy of hypertension, and comorbidities.

Improvement of their knowledge and attitude about hypertension will improve the care of hypertensive patients and reduce the serious complications of the same. It has been observed by one of the authors (M.T) that many practicing physicians in India are not fully aware of the current concept of hypertension and are in a dilemma regarding uses of certain antihypertensive drugs. In many of the scientific meetings on ‘Updates on antihypertensive agents,’ the PCPs expressed confusion over the recent controversy to use beta-blockers as the first line of treatment though it was in the mainstay for the past 30 years. A similar situation prevails over the use of angiotensin-converting enzyme inhibitors (ACEIs) and angiotensin receptor blockers (ARBs). This necessitated the initiation of a survey to be conducted on the line of management of hypertension by PCPs and hence the present study.

The salient feature of the questionnaire included the information regarding awareness, diagnosis, investigations required, therapy, choice of drugs, ‘P’ drugs, management of hypertension with diabetes mellitus, pregnancy and with a focus on pharmacoeconomic aspects.

The practicing physicians were explained about the purpose of the study, and informed consent was obtained. They were requested to complete the questionnaire which was collected. The data were analyzed and presented in the results.

ECG remains an important clinical tool for detecting left ventricular hypertrophy (LVH). Further, it is an independent predictor of cardiovascular mortality 5. Hence, hypertensive patients who have ECG evidence of LVH should be treated aggressively. ECG is a simple, easily accessible noninvasive investigation, but unfortunately, this survey indicates that almost half of practicing physicians are not aware of the significance of taking ECG in hypertensive patients. About the treatment of hypertensive patients in the clinic, only 28.39% of physicians felt that they could treat themselves. A significant proportion of physicians preferred a referral to a specialist.

TABLE 1: THE OPINION OF PRIMARY CARE PHYSICIANS ON VARIOUS ASPECTS OF MANAGEMENT OF HYPERTENSION

Surprisingly thiazide diuretics were the first line of treatment for only 7.4% of physicians Fig. 1. 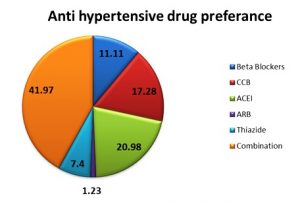 This is in contrast to the guideline of the seventh report of the joint national committee on the Prevention, Detection, Evaluation, and Treatment of high blood pressure (JNC 7) where thiazide diuretics were recommended as initial treatment 6.

When enquired the reason for not favoring thiazide diuretics as an initial choice, most of the physicians opined that thiazides can cause fatal or near fatal hyponateremia and hypokalemia; additionally, it can cause impotence, increase in plasma levels of LDL cholesterol and above all, the risk of precipitating diabetes. Further, one physician informed that when he prescribed thiazide diuretic to some patients, they come back to him informing that the medicine is not easily available and they have to run for at least 7 or 8 medical shops to get the medicine.

It appears that the apprehension of these doctors about the use of thiazide diuretics is justified. Perhaps, the fact that thiazides are the cheapest antihypertensive drugs, which may be one of the reasons for recommending as an initial treatment by JNC7 given life long therapy.

The preference for the use of CCBs and ACEIs and combination therapy by a significant number of PCPs appears to be reasonable. It is also to be appreciated that ARBs were considered by only one primary care physician in comparison with ACEIs, which were preferred by 17 physicians. This may be based on the view that ARBs are threefold costlier, despite equi-effective. Such a pattern of prescription shall improve patients’ adherence.

Beta-blockers, especially atenolol, has had the reputation of safe, effective drugs for the treatment of hypertension for the past 40 years ever since they were introduced and atenolol was the most widely used beta blocker. Given the observed higher incidence of cardiovascular mortality and stroke with atenolol treatment, its use is very much limited now. Concern has been raised recently about the safety of use of atenolol in hypertension 7, 8.

From our study, it appears that most of the practicing physicians are unaware of these adverse effects of atenolol as 76.54 % of them prefer to use atenolol. The reason perhaps that they are using the drug for 2 – 3 decades with good control of blood pressure and it is the cheapest of all beta blockers.

Further, the fact that it allows once-daily dose, which improves patient compliance might be yet another factor for considering prescribing atenolol. The recent recommendation that beta blockers should not remain as the first line of anti-hypertensive therapy in patients without coronary disease necessitates the need of updating the knowledge on the use of beta blockers in hypertension by PCPs 9.

A reduction in total cardiovascular events in those who were treated with amlodipine than those who were on atenolol was also observed 10. Further, it was considered that beta blockers produce a pseudo antihypertensive effect (failure to lower central aortic pressure) and lack effect on regression of target end organ like left ventricular hypertrophy. With these adverse effects, the use of beta-blockers as the first-line drug has to be reconsidered 11 and supports our contention that knowledge of PCPs on these lines requires reinforcement.

About the most preferred drug for the treatment of hypertension associated with diabetes, it is noteworthy that 82.71 % of physicians are prescribing ACEIs (Table 1). The delay in progress to microalbuminuria and better fibrinolytic capacity with ACEI, decrease the risk of recurrent myocardial infarction. Additionally, improved insulin sensitivity and glycemic control by ACEIs reduce the incidence of stroke – brain attack similar to heart attack apart from its beneficial action on myocardial infarction 12 (Table 1).

The observation that alpha methyldopa has been preferred as a drug of choice by 86.41 % indicates the physicians are aware that this drug still considered the standard drug of choice for hypertension with pregnancy. An insignificant proportion of 2.46 % preferred ACEI, which are contra indicated in pregnancy because of the risk of fetal renal failure and associated mortality 13.

Hypertension requires lifelong therapy, and it is imperative that the physician should consider pharmacoeconomic aspects while prescribing the drugs, especially in developing countries like India. However, compromise should not be made on the quality of the treatment.

The survey results reveal that the PCPs are aware of the cost of the drugs, thus utilizing this information while prescribing anti-hypertensive drugs for better compliance in patients belonging to a lower socioeconomic status group.

CONCLUSION: There is a compelling situation that PCPs need to manage hypertensive patients with or without co-morbidities on their own. To achieve this, an up to date knowledge on the therapy of hypertension to the PCP needs to be imparted.

The present survey reveals that the majority of PCPs are aware of the diagnosis and appropriate therapy for hypertension associated with comorbidities. However, a significant proportion requires an update on these lines. The estimated cost of treatment of hypertension and its consequences, which include stroke, MI, kidney failure, and heart failure will be a burden worldwide. If hypertension had been better controlled, many of these cardiovascular events would have been prevented or delayed, and death would have been avoided.

The PCPs have a definite role in controlling hypertension as already mentioned, it is the primary care physicians who are approached first by the patients. Therefore, professional bodies like Association of family physicians, hospitals and medical institutes have a moral duty in updating the knowledge of family physicians by arranging continuing medical education (CME) courses which is the need of the hour.