ABSTRACT: A selective and rapid LC-MS/MS spectrophotometric method has been developed and validated for the simultaneous determination of three ACE-inhibitors used in anti-hypertensive therapy, namely enalapril maleate, perindopril, and ramipril in human plasma using high-performance liquid chromatography-tandem mass spectrophotometry (LC-MS/MS) with electrospray ionization (ESI). Separation of analytes and internal standard; atorvastatin was performed on X-terra C8 (3.5 µm, 4.6 × 50 mm) column with a run time of 2 min. The mobile phase consisted of methanol: 20 mM ammonium formate, pH 6.3 ± 0.05 with formic acid (80:20, v/v). Analytes were extracted from human plasma using a simple protein precipitation technique with methanol, allowing fast analysis. The method was validated in terms of accuracy, precision, selectivity, recovery and stability as per FDA and EMA guidelines. The method showed linearity over the concentration range 4- 400 ng/mL, 2 - 200 ng/mL and 0.5 - 50 ng/mL for enalapril, perindopril and ramipril, respectively, applying weighted (1/X2) linear regression. The method is simple, fast, precise, accurate and suitable for its application for bioequivalence and pharmacokinetic studies.

INTRODUCTION: Hypertension is the most popular cardiovascular disease. It causes damaging blood vessels in the kidney, heart and brain leading to increased incidence of renal failure, coronary diseases, cardiac failure and stroke. Lowering blood pressure has been shown to prevent damage of blood vessels so reduce morbidity and mortality rates 1. Angiotensin-converting enzyme inhibitors (ACE inhibitors) are considered a 'first-line therapy' for the treatment of hypertension.

ACE inhibitors are especially important because they have been shown to prevent early death resulting from hypertension, heart failure (HF), or heart attacks and particularly useful in hypertensive patients suffering from diabetic nephropathy so they are widely recommended alone or in combination with other drugs 2. The European Society of Cardiology (ESC) Guidelines for HF recommended that ACE inhibitors should be prescribed immediately after HF diagnosis 3.

Frequently prescribed ACE inhibitors include Enalapril, Perindopril, and Ramipril. These are inactive pro-drugs that are converted to their active metabolites in the liver; the active metabolites prevent the conversion of angiotensin I to angiotensin II. As angiotensin II is a vasoconstrictor and negative feedback mediator for renin activity, so lowering its concentration results in lowering blood pressure and an increase in plasma renin. Chemical structures of the cited drugs are shown in Fig. 1. Upon literature survey, several LC-MS/MS methods have been reported for determination of enalapril 4-16, for determination of Perindopril 17-21 and determination of ramipril 22-32. To the best of our knowledge, the simultaneous determination of the three drugs in human plasma has not been reported.

The aim of this method is the determination of these three ACE inhibitors simultaneously in human plasma with a simple and fast extraction and quantification procedure to allow their therapeutic monitoring when needed in a reasonable time with low cost. Besides, fast bio-analytical methods would be beneficial in pharmacokinetic or bioequivalence studies where a high number of samples need fast analysis. 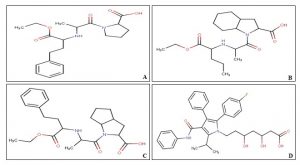 FIG. 1: CHEMICAL STRUCTURES OF (A) ENALAPRIL, (B) PERINDOPRIL, (C) RAMIPRIL AND (D) ATORVASTATIN (IS)

Chemicals and Reagents: Enalapril, perindopril, ramipril, and atorvastatin were kindly supplied from the National Organization of Drug Control and Research (NODCAR) Egypt (purity > 99.9%). HPLC grade acetonitrile and methanol (≥ 99.9 %), in addition to analytical grade ammonium formate (≥ 97 %) and formic acid were purchased from Sigma – Aldrich, Germany. Blank human plasma was obtained from the blood bank (Egypt) and stored at -70 ºC ± 5 before use. Water was purified using an in-house Sartorius arium purification system.

Chromatographic Conditions: Separation and analysis were carried out on X-terra C8 (3.5 µm, 4.6 × 50 mm) column. The optimized mobile phase consisted of methanol: 20 mM ammonium formate, pH 6.3 ± 0.05 with formic acid (80:20, v/v) at a flow rate of 0.6 ml/min in isocratic mode. Before the chromatographic use, the aqueous phase was filtered through a 0.45 µm type Whatman membrane filter. Prior to injection, the column was saturated with the mobile phase for 30 min and the injection volume of 10 μl was injected into the chromatographic system using autosampler mode. The retention times of enalapril, perindopril, ramipril and atorvastatin (IS) were 1.15 min, 1.2 min, 1.23 min and 1.24 min, respectively and the run time was 2 min as shown in Fig. 2.

MS Conditions: Mass spectrometric analysis was performed in the positive ion MRM mode. The nebulizer gas was air (zero grade), whereas nitrogen was used as the auxiliary, curtain and collision gas. The source/gas-dependent parameters for analytes determination were as follows: curtain gas, 20 psi; collision gas, 10 psi; medium temperature, 550 ºC; ion spray voltage, 2000 V; ion source GAS 1, 45 psi and GAS 2, 40 psi. Quantification was achieved by monitoring the m/z of precursor/product ions at 377.4/303.1, 369.3/172.1, 417.0/234.3 and 559.4/440.4 for enalapril, perindopril, ramipril and IS, respectively. 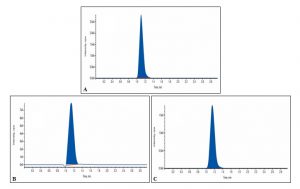 FIG. 2: TYPICAL MRM CHROMATOGRAMS OF QCH OF (A) ENALAPRIL, (B) PERINDOPRIL AND (C) RAMIPRIL

Preparation of Standard Solutions: Stock standard solutions of enalapril, perindopril, and ramipril were prepared in methanol with a concentration of 10 µg/ml each. Series of working standard solutions were further diluted in methanol and water (50:50) to produce working solutions in a range of 40-4000 ng/mL, 20-2000 ng/mL and 5-500 ng/mL, for enalapril, perindopril and ramipril, respectively.

A working solution of IS was prepared in methanol with a final concentration of 1000 ng/mL. All solutions were stored at 2-8 ºC.

Extraction Procedure: Simple protein precipitation method was carried by spiking 50 µl from working solutions containing mixture of three drugs into 450 µl blank plasma and vortexes for 30 seconds, then adding 1 ml methanol spiked with the IS, samples then vortexed for another 3 min, centrifuged at 5000 rpm, 10 µl from the upper layer was injected into the LC-MS/MS system.

Validation: Validation of the developed method was carried according to the FDA and EMA guidelines 33, 34 concerning linearity, precision, accuracy, selectivity, stability, matrix effect, and dilution integrity.

Development and Optimization of Chromatographic Conditions: During method development, several chromatographic conditions were attempted using different columns with different dimensions, a reversed-phase C8 (3.5 µm, 4.6 × 50 mm) column was the one of choice as it provided symmetric peaks and short retention time allowing fast analysis. Various mobile phase compositions of formic acid in the water, ammonium format buffer, ammonium acetate buffer with either methanol or acetonitrile were tried in an isocratic mode. Methanol gave good peak shapes of the three analytes and decreased peak width.

Thus, methanol was used as the organic modifier. Different ratios of aqueous and organic phases were tried. Based on these investigations, the ratio of ammonium format in the mobile phase less than 15% leads to a decrease in the mass response, so to meet the sensitivity and separation requirements, it was adjusted to 20%. Then, it was found that the use of 20 mM ammonium format buffer adjusted to pH 6.3 with formic acid as the aqueous phase led to better peak shapes. 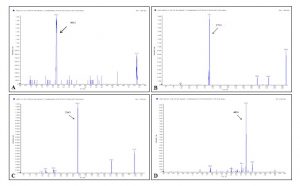 FIG. 3: REPRESENTATIVE ESI MASS SPECTRA SCANS FOR THE DAUGHTER ION OF (A) ENALAPRIL, (B) PERINDOPRIL, (C) RAMIPRIL AND (D) ATORVASTATIN (IS)

Without the addition of formic acid in the aqueous phase, the sensitivity of MS detection was decreased thus, the addition of formic acid was important to free the peaks of interest from interfering peaks at their respective retention times. A mobile phase consisting of methanol: 20 mM ammonium acetate pH 6.3 adjusted by formic acid (80:20, v/v/v) in isocratic mode of elution at a flow rate of 0.6 ml/min was used as it gives good peak shape, short run time and separate the analytes completely from the endogenous components in the matrix.

Development and Optimization of Mass Conditions: During the optimization of the MS/MS parameters, we aimed to develop a selective and sensitive method. Standard solutions were directly infused into the mass spectrometer, and the operating conditions were optimized to monitor the analytes. Positive mode tuning was used to find the parent and daughter ions, thus, to achieve maximum response for the three drugs as well as the IS.

For each drug, the MRM channel chosen was the one that gave minimal or no response from the other drugs to minimize the cross talk. First, the three drugs were ionized using ESI source prior to detection by multiple reactions monitoring (MRM) mode while monitoring at the following transitions: 377.4/303.1, 369.3/172.1 and 417.0/234.3 for enalapril, perindopril, ramipril and IS, respectively as shown in Fig. 3. Other MS/MS parameters (gas flow, gas pressure, and gas temperature) were optimized to have the maximum signal response for the three analytes.

Development of Sample Extraction Procedure: For extraction procedure, liquid-liquid extraction methods and direct precipitation using different organic solvents were studied. We started the extraction of drugs using a liquid-liquid extraction technique aiming to achieve cleaner samples. We tried different extraction solvents including di-ethyl ether, ethyl acetate, dichloromethane, tert-butyl methyl ether but recoveries of the three drugs were very low except for ramipril using Tert-butyl methyl ether. So, we shifted to direct precipitation technique using acetonitrile and methanol. Reasonable and reproducible recoveries were obtained by using methanol as the extraction solvent and this makes the experiment more simple, fast and easier in handling the samples. 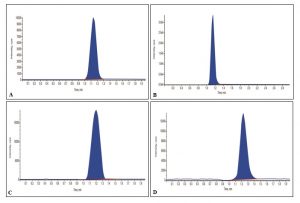 FIG. 4: TYPICAL MRM CHROMATOGRAMS OF LLOQ OF (A) ENALAPRIL, (B) PERINDOPRIL, (C) RAMIPRIL AND (D) ATORVASTATIN (IS)

Lower Limit of Quantitation: LLOQ (lower limit of quantitation) is the lowest concentration level of an analyte that can be quantitatively determined with good precision and accuracy and a coefficient of variation less than 20%.

Selectivity: Selectivity is the capability of the method to differentiate between the analytes and other components that could be found in the matrix. So, six blank samples from different sources were processed and injected to check for endogenous components, which might interfere with analytes or IS. All the plasma blank samples were free from any significant interference at retention times and MRM channels of the drugs and IS as shown in Fig. 5. 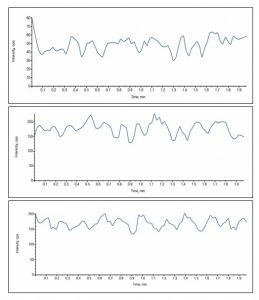 Weighted (1/X2) linear regression was applied and linearity was indicated by the high correlation coefficients of 0.9988, 0.9987 and 0.9968 for enalapril, perindopril and ramipril, respectively and by evaluating the back-calculated concentrations of the calibration standards. Table 1, 2 and 3 show that results obtained were less than 20% deviation at LLOQ level from nominal concentration and less than 15% deviation at other levels from nominal concentrations.

TABLE 4: A SUMMARY OF THE VALIDATION RESULTS FOR ENALAPRIL

TABLE 5: A SUMMARY OF THE VALIDATION RESULTS FOR PERINDOPRIL

TABLE 6: A SUMMARY OF THE VALIDATION RESULTS FOR RAMIPRIL

Matrix Effect: For the analytes and IS, the matrix factor (MF) is evaluated by calculating the ratio of the peak area in the presence of matrix from different sources (measured by analyzing spiked blank matrix after analyte extraction), to the peak area in absence of matrix (neat solution of the analyte). This evaluation is done at QCL and QCH levels. The IS normalized MF is calculated by dividing the MF of the analyte by the MF of the IS. The CV% of the IS-normalized MF calculated should not be more than 15 %.

Within-Run and Between-Run Precision and Accuracy: Six replicate measurements for LLOQ-QC, QCL, QCM, and QCH samples for analytes were chromatographed on three different days to evaluate precision and accuracy of the method. The mean accuracy should be within 20% of the nominal values for the LLOQ-QC and 15% of the nominal values for the QC samples. The results were summarized in Table 4, 5 and 6. Results show that the validated method is accurate and precise for the determination of the three drugs simultaneously.

Dilution Integrity: Accuracy and precision of the method shouldn't be affected by sample dilution. So, we used two dilution levels (2-fold and 4-fold) to measure the dilution effect on the developed method. Accuracy and precision should be within ±15%. Quality control samples were prepared by spiking plasma with concentration 720 ng/mL for enalapril, 360 ng/mL for perindopril, and 90 ng/mL for ramipril. Six samples of dilution integrity samples were prepared by diluting them twice and another six samples by diluting them four times. These samples were analyzed along with the calibration curve standards. The quality control sample concentrations were calculated. The method was precise and accurate for both dilution factors for the three drugs Table 4, 5 and 6.

CONCLUSION: A selective, sensitive, precise and accurate LC-MS/MS method for the simultaneous determination of three ACE inhibitors in human plasma has been developed, optimized and validated. The extraction procedure was fast, simple with reproducible recoveries; isocratic elution and short run time permit fast analysis. So, the assay allows and facilitates their therapeutic monitoring when needed in a short time at a low cost.